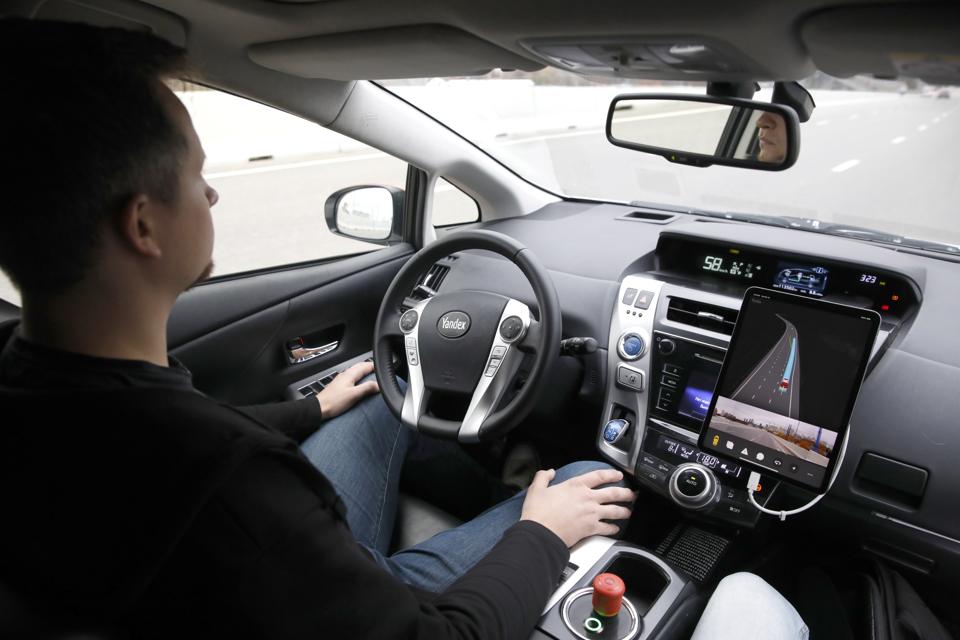 Hands-free driving on a highway–in an autonomous car.

An autonomous car in Arizona was involved in a fatal crash. Permits for pilot projects in the autonomous vehicle (AV) space have been revoked. Automaker executives are sharply revising their forecasts—extending the timeline—for autonomous cars to hit the retail market in significant numbers. Regulators from municipalities to supergovernments such as the EU continue to grapple with the thorny challenges that robot-drive automobiles provide. Indeed, it appears that autonomous cars are nothing more than a blur on a distant horizon, a horizon that seems to be racing away from us rather than drawing closer these days.

Like so many ground-shifting technologies, AVs struggle to climb the curve of adoption because the complexities (and therefore costs) involved are not fully understood or even visible until we get closer to them in terms of development and experimentation. For example, Volvo, a leader in the space, is pursuing development of assistance systems that are able to safely take over highway driving. This path is being taken rather than promising a fully-autonomous AV, which is likely many years further off. Just developing a highway driving assistance system has unveiled a multitude of challenges, many of them having to do with driver confidence. This story is like so many others in technological history. Getting to the vision means navigating a labyrinth filled with surprises and ambushes. 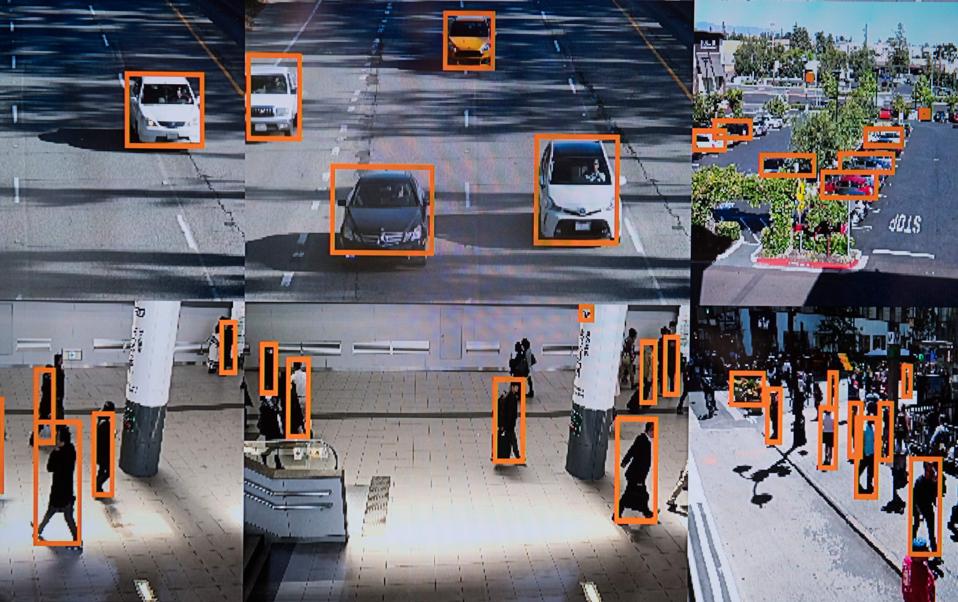 Machine learning may be a useful ally in simulations that help solve AV challenges.

But what might be lost on a great many observers of this fascinating industry is that the advancement of other technologies can have a profound impact on solution-finding. Machine learning, despite its own development challenges, can already offer help in solving some of the perceived Gordian knots in the AV space. It’s possible that the next leap forward for autonomous cars will arrive when a trillion iterations of a simulation solving a central problem provides us with the data that sparks momentous insight.

In the meantime, constant pressure from industry (well-regulated by government, naturally) contributes small steps towards the horizon. Uber, for example, has just been granted a permit to operate self-driving cars in California. There are expert predictions that claim children born in 2020 may never have to learn how to drive a car. Nissan recently completed what may have been a 230-mile trip by a Level 5 autonomous car (it’s unclear what level of autonomy the car actually possessed and Nissan was vague).

While all of these steps are crucial, the Law of Diffusion of Innovation requires there to be enough early adopters before the mainstream will even consider directing their gaze as consumers toward a new technology. In the AV space, generating adoption requires nothing less than creating opportunities to use the technology.

Enter Transdev, a titanic (2018 revenues of €6.6 billion) multinational focused on the public transport sector. It is no surprise that AV has captured the imagination of the public transportation industry—so many aspects of self-driving vehicles lend themselves well to providing public transit services to the general population.

It is interesting to note that 90% of our users [in the pilot] are regular ones who commute with us, but also that 70% of them are senior adults, disabled citizens or children.

Transdev has significant operations in most regions around the world. Their track record in AV research and development is one of the best. They chose Chile for a pilot project that promises to offer insight on how to develop best practices for autonomous public transit (and if you wonder why Transdev selected Chile, you might consider how the country views technology and entrepreneurship.)

This writer had the opportunity to connect with Lluís Vidal, Transdev’s Head of Strategy in the region. Vidal is an entrepreneur and innovator at heart, and pours all of his considerable energy and expertise into the public transport space. His description of the pilot project and what it means for the AV industry is both encouraging and rational: “Transdev planned this pioneering project in Chile, which is divided in two phases: the first one, a three-month pilot project, to test the technology and service for its very first time in the region, only to then, in a second phase, combine it with an innovation process consisting in a open challenge mixing international and national events in Santiago de Chile, with the objective of creating the roots of this future AV ecosystem the alliance believes in.” 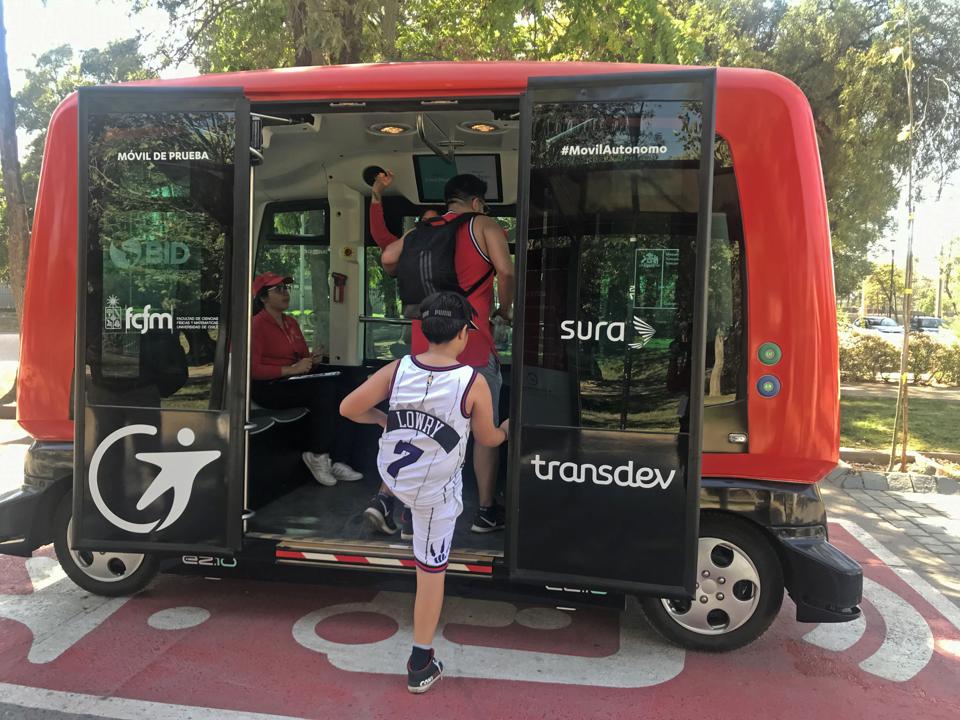 A commuter boards an EZ10 in the Transdev pilot project in Santiago de Chile.

The service that Vidal refers to is a public transit pilot in Santiago de Chile using an EasyMile EZ10 autonomous minibus. With a capacity of 12 people and limited operating hours, the pilot was still able to move 400 passengers per day. These numbers over time were sufficient to provide Vidal and his team significant data and learning opportunities: “The pilot project is being and will be very helpful in every project developing aspect you can imagine as, essentially, the whole process is new: shipping, customs, purchasing, geo-positioning, GPS correction, user experience, spare part management, logistics, trainings, operations, team management, passenger information, etc.”

The pilot didn’t simply operate an autonomous vehicle in a vacuum. The team also collected user behaviour information with a smart camera system at bus stops and on the vehicle itself. Vidal intends to use the data to inform future protocols developed for real public transport contracts with autonomous vehicle fleets.

Vidal offered some final insights: “It is interesting to note that 90% of our users [in the pilot] are regular ones who commute with us, but also that 70% of them are senior adults, disabled citizens or children. This can be attributed to the 500 meter last-mile solution Transdev implemented with this operation, which connects the only Olympic swimming pool in Santiago de Chile with a major Metro Station, via the most emblematic park in the city – Parque O’Higgins, thus reducing a 15 minute walk to a 2 minute AV shuttle ride during the hot southern summer.”

Vidal’s team is looking forward to the next phase of their R&D effort, taking what they learned and applying these invaluable lessons to eventual enterprise level deployments. More pilots in different cities are inevitable, whether they’re conducted by Transdev or one of its competitors. As more AVs are tested, as unanticipated complexities come into focus and are solved, and as more people are exposed to the technology, we should see adoption take hold. There are no shortcuts in this space, but the long walk to the horizon continues at a steady pace.

World’s ‘Weirdest’ Sharks And Rays On The EDGE Of Extinction

Trail Blazers’ Gary Trent Jr. Taking His Opportunity And Running With It

The Latest Chinese Supply Chain Restrictions And Its...