Mr. Milberg is the publisher of Forbes Argentina and has over 20 years of experience as a journalist. 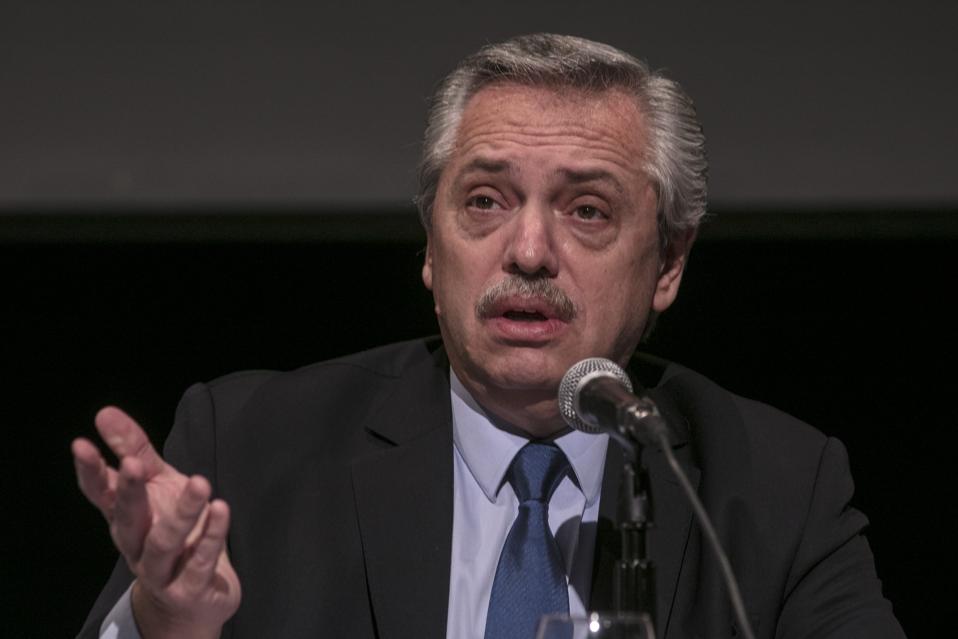 “Under the current conditions, Argentina can’t pay its debt.” These words, uttered by president elect Alberto Fernández, are the cornerstone of the negotiations that will be a top priority for his administration, set to begin on December 10 when he will officially succeed Mauricio Macri.

Fernández won the election with 48% of the vote and was anointed as a candidate by his running mate, former president Cristina Fernández de Kirchner, after the two mended fences following five years of estrangement and harsh criticism of one another. What will the government’s “New Deal” consist of? I interviewed a minister and a state secretary of the new government to outline, off the record, a road map of the challenges the new administration faces.

“The macroeconomic situation is grave and backward steps were taken in recent years,” said Martin Guzman, the new economic minister. “However, we believe that Argentina has been excessively punished due to its historic record.” The incoming official refers to the political instability in the region, which includes strong social protests in Chile, a controversial electoral process followed by a coup in Bolivia, an institutional crisis in Peru and a rising social and judicial conflict in Brazil. However, in most of these countries, economic variables appear to be more solid.

The strong political winds in the region can turn into hurricanes in Argentina, where the transition from Kirchnerism to Macri and now from Macri to Alberto Fernández has been achieved with institutional transparency. What isn’t helping is the macro economy and an additional challenge is calming the concerns of the international markets.

It’s true that the Peronist victory could signal a return to populism due to Macri’s failed management of the economy. But Alberto Fernández, in his moderate and pragmatic style, is trying to portray himself as the “first centrist Peronist” in the history of a party that in its 70 years has embraced extreme left wing, extreme right wing, progressive, conservative, protectionist and neoliberal policies. Due to its own history, its unlikely Argentina will go the way of Venezuela.

What will be the five main objectives during the first half of the year?

Over the past four years, the peso suffered a depreciation of 333%: the value of a dollar went from 15 pesos to 65 and Argentina’s top CEOs estimate in their 2020 budgets that, on average, a U.S. dollar will be worth 84 pesos. To achieve this, they expect the Central Bank to play a leading role while it continues to consolidate its reserves (now at $14 billion) to withstand possible runs and meet debt obligations (see point 3).

Argentina’s incoming administration also expects to keep foreign currency controls in place (known locally as “the clamp”), introduced by the Macri administration on October 28, a day after losing the elections (no Argentine can purchase more than $200 a month for savings and to pay debts abroad, and private clients and companies must submit contracts for approval by the Central Bank). What is not in the cards is a dual exchange rate system (a “tourist” dollar or a differentiated dollar for exports).

In 2019 inflation will clock in at about 57% for the year—the third highest rate, behind Venezuela and Zimbabwe. Over the past four years accumulated inflation has accelerated to the pace of devaluation—nearly 300%. The target for the first year in office is to cut it 17 to 27 points, to hit an annual target of 30-40%. Inflation is attributed to multiple causes and not just considered a monetary issue, in a country with a traumatic history when it comes to the impact of macroeconomic instability on the peso’s value against the dollar. Asked about the real possibility of hyperinflation, the incoming minister asserted: “There’s no chance of such a scenario. We are very conservative on other fronts like, for example, future growth targets.”

3) Negotiations with the IMF, international agencies and private creditors. In 2020 Argentina must pay debts to the tune of  $37 billion. The first $7.651 billion are due between December and March and the payment is expected to be made with Central Bank reserves. But, payments totaling $8.5 billion are due already in April and May and they look unpayable, given a 3% drop in GDP in 2019. The negotiation with the IMF will be vital because the lender will also face strong internal tensions for having pledged 47% of its portfolio in loans to Argentina for the sum of $56 billion, of which it has already disbursed $44 billion.

The Argentine government’s proposal will not include a haircut like it did over ten years ago, but it will include a grace period of at least four years to start paying. Why? In 2019 the economy will end with a primary deficit close to 0.5% of GDP. A similar deficit is contemplated for 2020, a balanced one in 2021, a slight surplus in 2022 and only the hope of more significant growth in 2023. At the same time, the government will try to achieve a successful negotiation with private creditors as a means of applying pressure as it faces the IMF.

It was Alberto Fernández’s slogan and also that of another Macri opposition leader and now possible ally, economist and former politician Roberto Lavagna. They’ve reviewed the years of stagnation and bet that exports will reactivate the economy: “beef could be the next soya,” they say, in reference to the price of commodities that hit record value in 2005 when a debt restructuring was successfully negotiated after Argentina’s default in 2001. Due to the African swine fever hitting China, there’s also hope that Argentina will be able to meet part of the pork demands of Asia and Europe.

5) Aid for the needy, development of small- and mid-sized companies (PYMES) and consumption.

Among targets for the initial phase, Argentina is contemplating a deep analysis of the public budget to inject money into the more vulnerable sectors and the middle class to reactivate consumption. Where will the cash come from? From budget reallocations and debt payment breaks. “Without consumption there is no growth and without growth we can’t pay,” say the incoming minister and state secretary. They also warn that they must avoid the mistakes of the past, like allowing out of control monetary emissions that could trigger even more inflation. The domestic market is vital for PYMES, which generate 80% of national production with less that 2% of companies exporting. However, PYMES are enduring the worst period since 2001, as more than 22,000 have gone bust in the last 4 years.

Go Behind The Scenes At 7 Iconic Brands...

Meet The Only Black Women To Operate A...

What Entrepreneurs Are Reading To Help With The...