Breaking
How To Get Your Startup Business Off The...
How To Create A COVID Safe Construction Site
How to Make a Good First Impression at...
Covid-19 Death Toll In U.S. Passes 200,000
5 Decisions That Will Increase Your Chances Of...
Coronavirus Is Shaping Up To Be Very Bad...
Is It Time For A Bank For Women?
As Israel Locks Down, Its Health Tech Sector...
Buying The Bulge Is Dangerous
5 Strange Things Happening Right Now In The...
The Best Blogging Platforms (In-Depth Review)
How Will The Coronavirus Impact Your Finances?
How Xbox Series X Will Attempt To Avoid...
Virgin Orbit Seeking Over $100 Million As ‘Jaw...
How To Develop The Confidence To Launch A...
USPS Covid-19 Coronavirus Plan To Send Every Household...
Android Circuit: Mysterious Samsung Galaxy, Google’s Next Pixel...
Snowflake: Valuable Lessons For Entrepreneurs
After Man Shoots Fiancee’s Parents, Bloody Footprints Lead...
Home Business Ariana Grande, The Beatles And John Williams: 5 Noteworthy Moves On This Week’s Billboard 200
Business

Ariana Grande, The Beatles And John Williams: 5 Noteworthy Moves On This Week’s Billboard 200 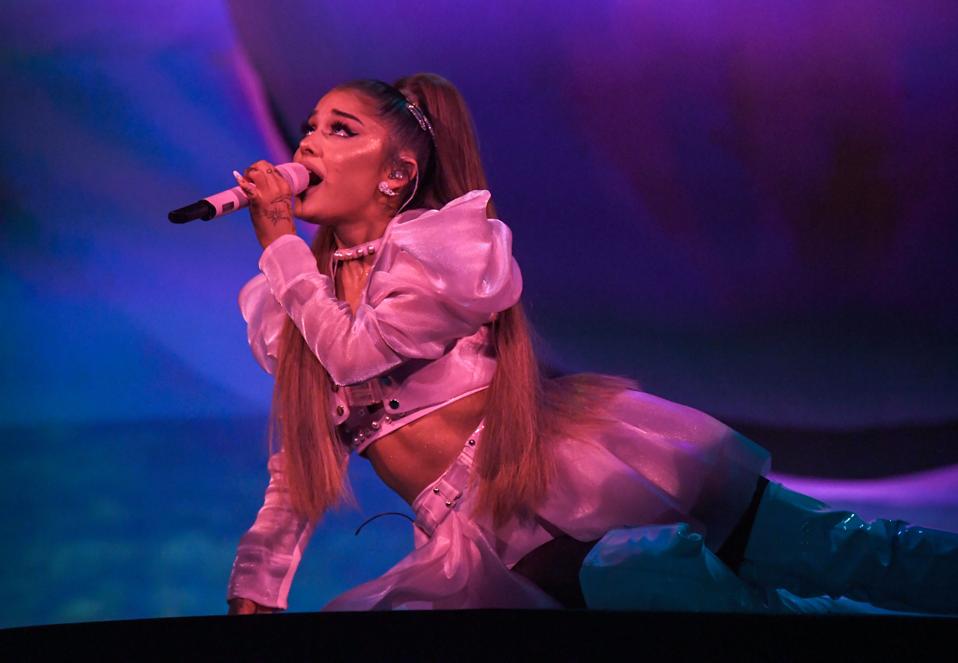 LONDON, ENGLAND – AUGUST 17: Ariana Grande performs on stage during her “Sweetener World Tour” at … [+] The O2 Arena on August 17, 2019 in London, England. (Photo by Kevin Mazur/Getty Images for AG)

Christmas albums completely dominate this week’s Billboard 200, but that should change quickly, as fans of seasonal favorites the world over move on from jingle bells and carols once January rolls around. Only a handful of new releases find their way to the list, while one of the most successful compilations of all time hits a very special milestone this time around.

Decades after his passing, Frank Sinatra is still seeing some of his collections rise higher and higher on the Billboard 200, proving just how popular he remains to this day. The crooner’s Ultimate Christmas compilation is one of several beloved collections that reach a new peak on this week’s list, powered mainly by increased streams due to the holiday.

Behind Sinatra, Bing Crosby’s The Best Of Bing Crosby: 20th Century Masters: The Christmas Collection (No. 14), Burl Ives’ Rudolph The Red-Nosed Reindeer (No. 16), Brenda Lee’s Rockin’ Around The Christmas Tree: The Decca Christmas Recordings (No. 17), Perry Como’s The Classic Christmas Album (No. 18), Gene Autry’s Rudolph The Red Nosed Reindeer And Other Christmas Classics (No. 21), John Legend’s A Legendary Christmas (No. 22), Andy Williams’ Classic Christmas Album (No. 23) and Elvis Presley’s It’s Christmas Time (No. 25) all rise to previously-unknown positions, and there are plenty more lifters lower on the chart.

Despite December being one of the busiest times of the year for people purchasing albums, there are no debuts inside the top 40 on the current Billboard 200, something that happens very, very rarely. The loftiest opening comes at No. 42, where the score to the new (and perhaps last?) Star Wars film launches.

Ariana Grande is used to reaching the top spot with any new release, so why is her latest starting off so low on the Billboard 200? The pop singer’s k bye for now (swt live), her first live recording, was released on a Monday, which only gave it a few days of activity with which to find space on the chart. On top of that, it dropped just two days before Christmas, so many people were likely busy and didn’t get around to buying or streaming the set.

Expect the title to jump up the ranking after a full tracking week has passed.

Certainly not new to the chart, The Beatles’ 1 compilation, one of their most successful launches after they split, continues to perform well week after week, even though it’s been out for almost two decades now. The project is back at No. 109 as it celebrates 400 weeks on the tally. 1 is just the eleventh album to reach that milestone.

Half a century into his career, John Williams continues to show that his music is perhaps the most beloved in cinema history, as he lands not just one, but two new placements on the Billboard 200 this week. Narrowly making the cut is his soundtrack that accompanied the film Home Alone, which has become a Christmas classic. Surprisingly, the album, which was released in 1990, is featured on the chart for the first time this frame.