Breaking
Zynga Stock Looks Attractive At $9
How Russian Thieves Use Dark Web To Get...
France Off Travel Corridors And FCO Exempt List
Ask Ethan: Why Are The Moon And Sun...
When To See The Moon And The Planets...
IRS-CI Involved In Largest-Ever Seizure Of Terrorist Organizations’...
The Check Really Is In The Mail. After...
Epic Games Vs Apple: Why You Won’t Be...
Senator Kamala Harris Proposed A Bold Tax Credit...
Deal Terms To Reduce The Risk When Buying...
Multiple Sclerosis Drug Shows Promise For HIV Prevention...
The Neglected Piece Of Retirement Planning
It’s No Longer A Viable Option For Capitalism...
Virtual Credit Cards: An Extra Layer Of Protection...
Lessons From The Rainforest: Human Health Leads To...
Four Easy Ways To Bolster Your Company’s Reputation
Home Finance Art Of The Deal – How Donald Trump Is Saving The Euro
Finance

Art Of The Deal – How Donald Trump Is Saving The Euro

Europe looks on as Trump works the Art of the Deal 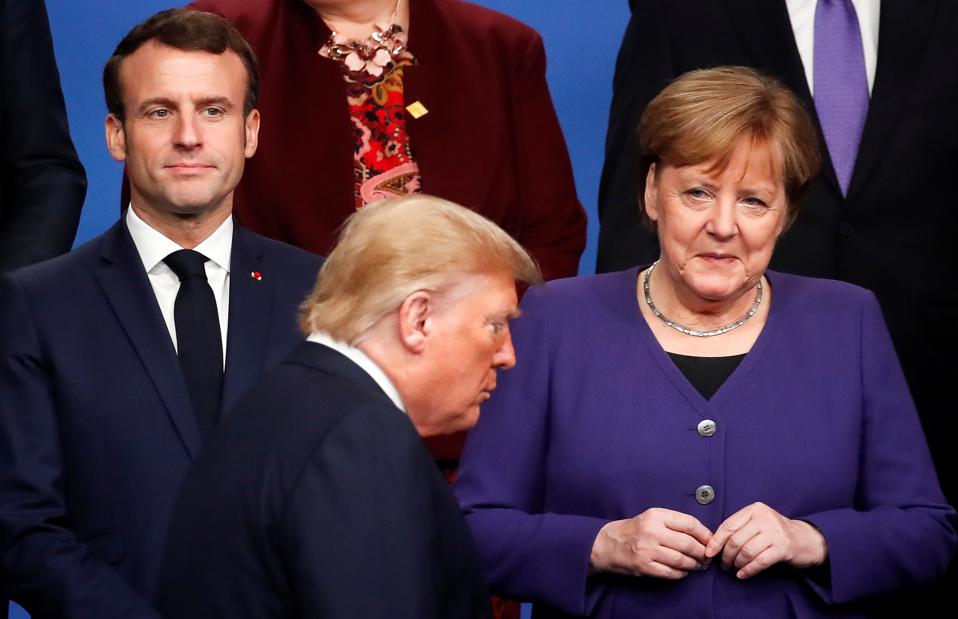 TOPSHOT – France’s President Emmanuel Macron (L) and Germany’s Chancellor Angela Merkel (R) look at … [+] US President Donald Trump (C) walking past them during a family photo as part of the NATO summit at the Grove hotel in Watford, northeast of London on December 4, 2019. (Photo by CHRISTIAN HARTMANN / POOL / AFP) (Photo by CHRISTIAN HARTMANN/POOL/AFP via Getty Images)

Many people ponder whether Donal Trump is making the same mistakes as Herbert Hoover. This does increasingly look to be the case, as the economy is slowed down by the debilitating consequences of trump’s trade war with China.

However, a reading of the Art of the Deal (consider quotes like ‘I’m the first to admit that I am very competitive and that I’ll do nearly anything within legal bounds to win. Sometimes, part of making a deal is denigrating your competition’) hint as some method behind this week’s trade related threats to China, the EU and France, not to mention the ongoing undermining of NATO.

It grants far too much credit to Donald Trump to describe him as the architect of a new world order, rather he is the bull in a china shop of increasingly brittle crockery. His role, in the context of the fracturing of the old, globalized word order is to help highlight what elements in that world order are fragile and which ones are resilient. The checks and balances in the US political system, and the wisdom embedded in them through the Federalist Papers for instance, are so far proving resilient.

Arriving in Europe this week, Trump clearly had two targets in mind – the EU and NATO, both of which lie on the deepening faultline of the consequences of America’s diplomatic estrangement from Europe. Trump has rarely had anything better to offer either institution save scorn and division. In my view this is a pity, and simply wrong.

NATO and the EU are fine examples of how collective action usually requires a strong common cause to enforce it, and that absent the magnetism of that common cause (broadly speaking the Cold War), cohesion between members begins to ebb. In addition, both institutions are finding that they have a common design flaw – namely the lack of an exit. Neither NATO nor the EU (not to mention the euro-zone) have processes where a recalcitrant member can be kicked out. Brexit shows us that even those who volunteer to leave, find it difficult.

To make an analogy, no public building can be used without a fire escape or carefully marked ‘exit’ in place, and it should be the same for multi-lateral institutions in a changing, multipolar world. This multipolar world iso ne where nations will increasingly have to take sides. In this context, Turkey’s membership of NATO will become increasingly problematic, and the position of EU members like Hungary, and prospective candidates like Serbia also looks strained. My prediction is that both NATO and the EU will have to change their uni-directional membership rules to include a ‘black-balling’ process.

That NATO rests on the emerging faultline of US-EU relations gives us a clue as to its future. The logical contradiction is that the White House could soon declare a trade war on Europe, at the same time as partnering with the EU to fight ‘real’ wars. To paraphrase Justin Trudeau, it is enough to make ‘jaws drop’, though is not as peculiar as it seems. For instance, in October, as the final wrangling over the UK’s Brexit deal was taking place, French commandos joined their British counterparts in a joint operation called ‘Griffin Strike’, part of a larger cooperative exercise between Europe’s two military powers.

One way for the EU to contribute to its own security in the context of a multipolar world where the US is a less unambiguous ally, apart from making sure its military kit works (only one sixth of German helicopters and fighter planes are operational), is to develop its power as an economic and financial player.

Theoretically this approach fits into the ‘total war’ doctrine developed by Russian General Valery Gerasimov, where financial networks are just as useful strategic tools as fleets of submarines. The effect of American sanctions on Iran is one recent, powerful example of this.

To that end, the new Commission has a long task list, but it should focus on the following. First, bolster the international credibility of the euro by enforcing the Maastricht guidelines of debt levels to the point that countries with debt above the Maastricht threshold should have a portion of their debt deemed ineligible for ECB purchases and for collateral exchange.

Second, continue to clean up the follow of ‘dirty’ money across Europe’s banks and fintech players. The relatively new EBA has failed to do this.  Third, think how infrastructure development in countries like Poland and Greece can be better supported by the EU and by EU based private investors, instead of those countries swaying towards Chinese state led investment.

If these are other measures are enacted, Donald Trump may prove the catalyst for a stronger euro financial system.

Why Peloton Stock Dropped More Than 10% After ‘Sexist’ Ad Backlash