Breaking
Looking To Improve Efficiency In Your Business? Here’s...
AI and machine learning for business
How Social Media Changed the World
Shopify: The Pros and Cons
Should your business go green?
Expanding Your Business Into Spain: What You Need...
Essentials For Your Office Coming Out Of COVID-19
What Can Marketers Learn From Digital Cults?
Why NASA’s James Webb Space Telescope Will Never...
Increasing HR Effectivity and Efficiency through Software Solutions
The Difference Between Building A Startup In Bull...
Fluor Corp Ranked Among Today’s Top Shorts
Common Pitfalls to Look Out for When Buying...
Will the Olympics go ahead this year?
Pack Up the Big Top: Insights from MozCon...
Best WordPress Themes for Blogs
Home Business Arturo Vidal Gives Barcelona Something To Think About In Alaves Win As Inter Milan Close In
Business 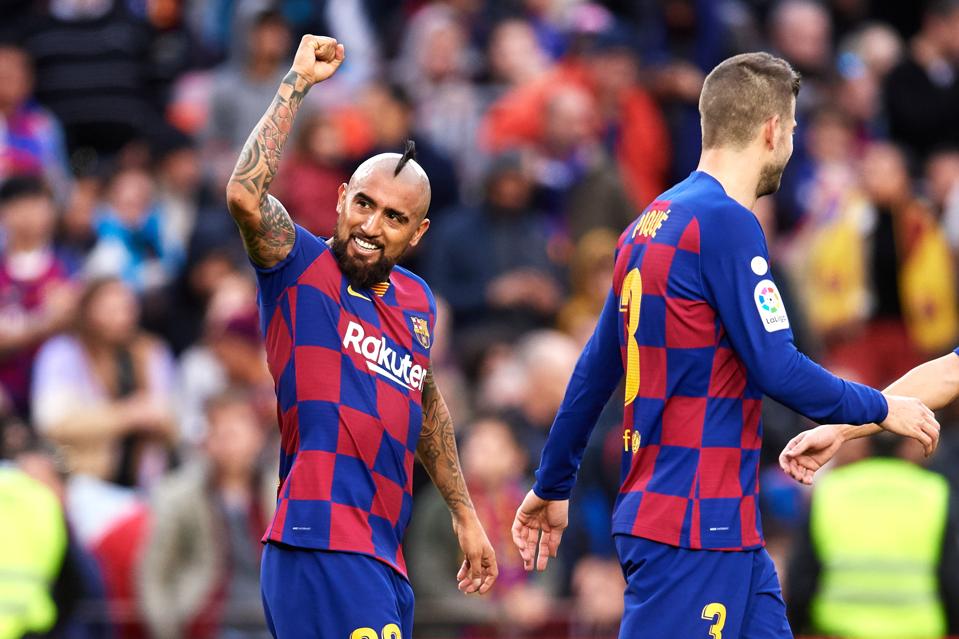 His was a shock inclusion to Ernesto Valverde’s teamsheet at the Camp Nou on Saturday.

For FC Barcelona’s last clash of 2019 against lowly Alaves, it had been suspected that the coach would not divert away from his usual midfield trident of Sergio Busquets, Frenkie de Jong, and now Ivan Rakitic to guarantee that the Blaugrana went into the new year as LaLiga leaders above bitter rivals Real Madrid.

Yet in front of pivot Busquets, returning from a sickness that ruled him out of a drab Clasico three days prior, there was the Chilean international and a similar surprise in La Masia graduate Carles Aleña getting only their fourth and second domestic starts respectively.

According to reports relayed by ESPN, Vidal had stormed out of training on Tuesday upon learning that he would be snubbed for the 0-0 draw with Zinedine Zidane’s men, which he entered as a 55th minute substitute replacing Nelson Semedo.

Usually staying behind to practice his shooting, Vidal “could not be calmed down” by those present with it now becoming feared that the double-Copa America winner “could now push for a January move away from Camp Nou”.

Perhaps the Alaves nod could be viewed as a bid to keep him sweet, then, or at least give a fan favourite the send-off he deserves.

In the seventh minute, he almost marked it in golazo fashion with a stunning overhead kick set up by Lionel Messi but got on the scoresheet in the second half with a rocket assisted by Luis Suarez to make it 2-0 in the eventual 4-1 win.

His 79th winner at Leganes perhaps the most important at the end of last month, Vidal has in LaLiga already surpassed his 2018/2019 tally of three and almost doubled it with five thus far in four aforementioned starts.

Should he stay, he is well on track to top a career-best 11 with Juventus in 2013-2014, however it is the figure he achieved this under in Antonio Conte that could prove disruptive to such a quest.

Courting Vidal since the beginning of the campaign when his discontent with a lack of playing time became public knowledge, Inter Milan’s Conte wants King Arturo to help him end the eight-year dominance of their joint former club in the Serie A which they started together.

According to Mundo Deportivo, his agent Fernando Felicevich “was this week in Barcelona trying to find a way out [for the player] to Italy”, while the Nerazzurri – as attested by two leading Italian sports daily newspapers – apparently prefers to loan him until the end of the season with an option to buy permanently for $22mn.

On the contrary however, Roger Torrelo claims that Barça “is not willing to part with the Chilean midfielder, unless the offer is dizzy”.

“Although he is not untouchable under Valverde, the sports management [department] believes that Vidal has a profile that no other player has in the squad,” continued Torrelo of the 32-year-old, before pointing out that he is the team’s fourth top scorer after the high-flying members of the MSG trident in Messi, Suarez and Antoine Griezmann.

Meanwhile, Valverde said post-match yesterday that he does not think his war horse “can go” when the transfer window opens at the turn of January. With FCB needing to raise $140mn to balance the books by the end of June however, neither party may get a say in the matter.

Here’s Who All Those Voices Were At The End Of ‘Star Wars: Rise Of Skywalker’

Should You Consider The ‘Lite Beer Of Investing’ In 2020?