Breaking
Channel Your Impact With a Self-Directed IRA
How To Reach Your Customers This Holiday Season
10 Key Steps That Will Help You Make...
TikTok Will Limit And Label Videos Prematurely Claiming...
How A British Graphic Novel Publisher Is Leading...
Dow Plunges 600 Points On Third Day Of...
According To A New Study, Patients Are Texting,...
How To Keep Your Digital Media Assets Secure
Be Better At Building Your Team
Saying No In Order To Grow
Sherwin-Williams Stock Is Unlikely To Sustain Its Current...
How Successful Entrepreneurs Use The Law Of Attraction
Elon Musk’s Economics 101 Course For Japan
Raoul Pal: Gold Investors “Will Flip To BTC”...
Dating Site Takes On Social Media Dangers Of...
Trump Campaign Website Hacked In Cryptocurrency Scam
Home Business As COVID-19 Spreads, Mary Barra Needs To Denounce Trump As Bad For Capitalism
Business

As COVID-19 Spreads, Mary Barra Needs To Denounce Trump As Bad For Capitalism

It’s not that Mary Barra hasn’t tried to make peace with Donald Trump.

On Friday, Trump accused the General Motors Co. chief executive of wasting time and ripping off taxpayers during the coronavirus crisis. Within minutes, Barra promised to start shipping ventilators next month and to cut prices so she won’t make a dime of profit.

But as he rooted around for scapegoats, Trump was in no mood to take yes for an answer.

He responded by invoking a Korean War-era law called the Defense Production Act to order Barra to deliver the ventilators she had just promised to build anyway. In the process, he went straight for the jugular of a company trying desperately to maintain a progressive, technically-advanced image even as the pandemic brings the world economy to a screeching halt.

“As usual with `this’ General Motors, things just never seem to work out,” Trump thundered on Twitter. “Always a mess with Mary B.,” he wrote, referring to Barra. 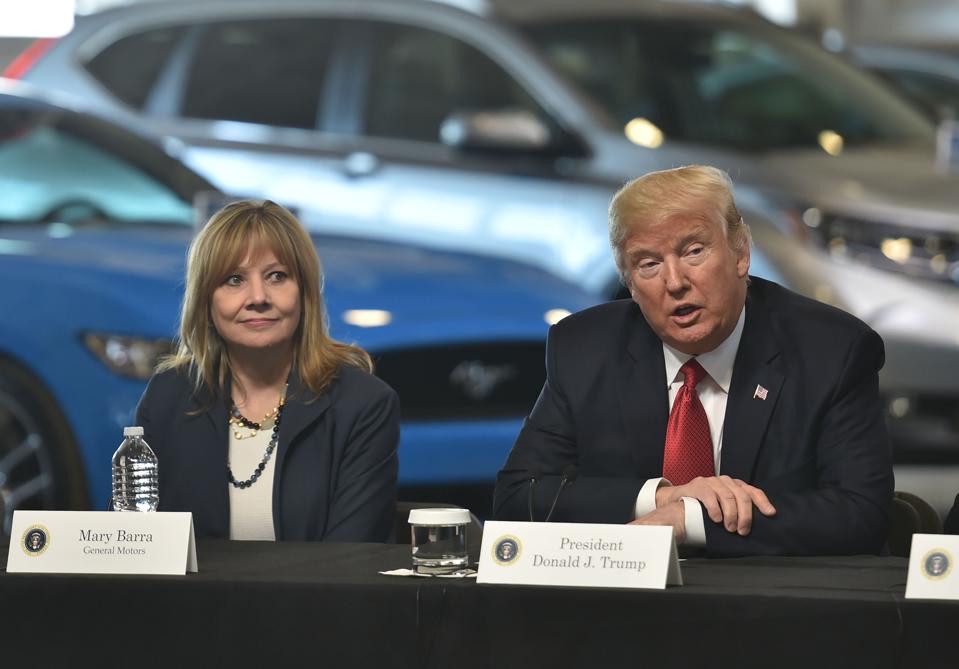 “Your Governor, Gretchen “Half” Whitmer is way in over her head,” he warned Michiganders. “She doesn’t have a clue.”

So that’s what we can expect from Trump even as the pandemic death toll surpasses 2,000 in the U.S. and promises to get much worse. There’s no person or institution – even at the heart of American industry — that can’t get tossed into the wood chipper as Trump seeks to evade blame for his sluggish pandemic response.

“The whole reason George W. Bush shot up in the polls after 9/11 is that he projected himself as the embodiment of national unity,” said Nelson Lichtenstein, a historian at the University of California at Santa Barbara. “Trump just seems incapable of that.”

Lichtenstein’s views are worth considering because his 1997 biography of United Auto Workers union president Walter Reuther includes a detailed account of how U.S. industry mobilized during World War II. His book is called “The Most Dangerous Man in Detroit.” 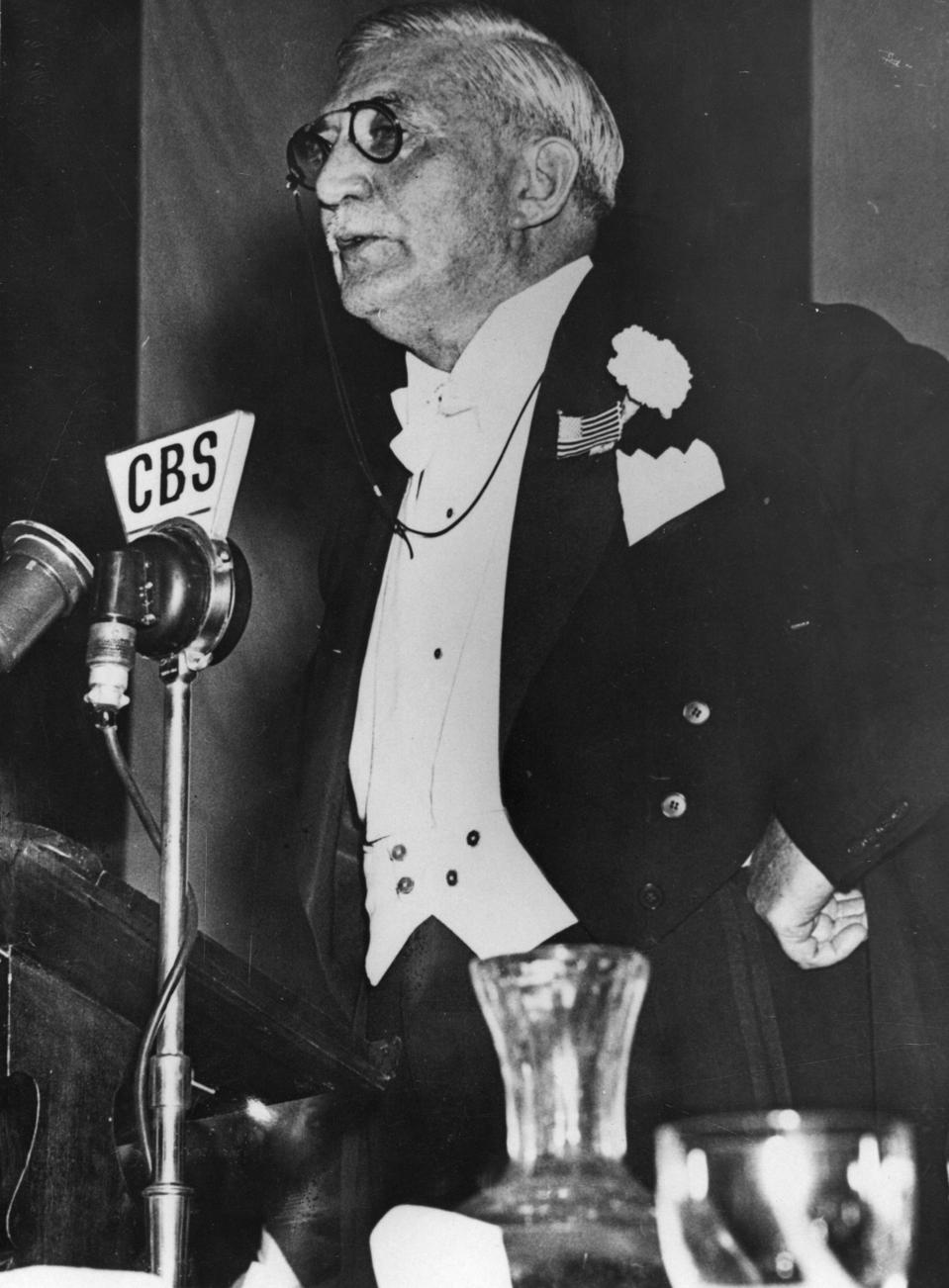 It wasn’t just that leaders like Franklin Roosevelt or Winston Churchill could inspire millions to sacrifice for a cause greater than themselves, Lichtenstein said. It was that they laid out systematic plans for how to do so.

Under Roosevelt, the U.S. government built hundreds of factories and then wrote cost-plus contracts so manufacturers like GM could run them and churn out vast armadas of ships and planes almost overnight. Roosevelt recruited executives like GM President William Knudsen to coordinate the mobilization. He rationed critical supplies like rubber and aluminum to reserve them for essential needs. He provided war workers with health insurance, housing, childcare, and unions.

Such “New Deal-ish programs” helped popularize the war effort with the American people, Lichtenstein said. Conservatives fought hard to prevent Roosevelt and then Harry Truman from extending them into the post-war era. But even then, the spirit of shared sacrifice was so strong worldwide that Churchill set himself up for a devastating defeat by claiming that a Labour Party victory would bring Gestapo tactics to London in 1945.

“Call me in November to see if Trump can succeed with his divisiveness, but all the accounts we have from history say it’s a stupid thing to do,” Lichtenstein said.

It’s hard to know what prompted the Trump tirade that, according to Bloomberg, caught GM entirely off guard on Friday. The company certainly over-promised how quickly it could reorganize supply chains it’s spent the last half-century scattering across the globe. GM has cut by two-thirds to around 7,000 the number of ventilators it can ship in April or May, according to the New York Times. 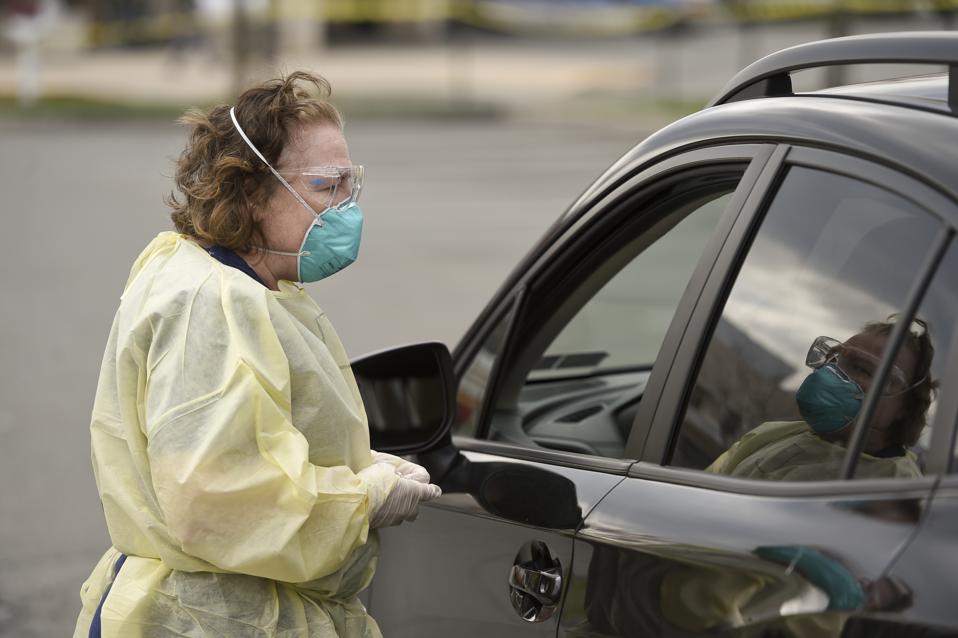 Registered Nurse Debbie Jessell talks to a patient during drive-through COVID-19 testing in … [+] Pennsylvania on Friday.

But Trump may have also been reacting to a New York Post cover showing nurses in Manhattan wearing garbage bags because their protective clothing had run out. Perhaps it was a New York Times story saying Trump was the one haggling with GM over money and worrying that the company was planning to build TOO MANY ventilators.

On the night before his tirade, Trump appeared on Fox News and disputed New York Governor Andrew Cuomo’s call for urgent action. “I don’t believe you need 40,000 or 30,000 ventilators,” Trump said of Cuomo.

In the face of such erratic leadership, it’s a fair question to ask what the rest of us can expect from corporate executives like Mary Barra.

Part of me hopes she’ll call a press conference and denounce Trump as a threat to capitalism. I’m thinking here not just of coronavirus but climate change as well. Trump plans this week to finalize his rollback of Obama-era fuel economy and tailpipe emission regulations, and for now, Barra supports him. But the cutback comes at an awkward time since coronavirus, by shutting down transportation and other industries, is clearing the air in polluted cities worldwide – and saving more lives than the pandemic itself is claiming.

The more likely scenario, according to Lichtenstein, is that Barra will maintain a stony silence. “Why poke the bear,” he said, “when you can just let him go and denounce someone else tomorrow.”

It’s a posture that’s reminiscent, he said, of German industrialists who thought they could control Adolph Hitler until it was too late.

Post-Coronavirus, How Telemedicine Could Upend The Healthcare System.