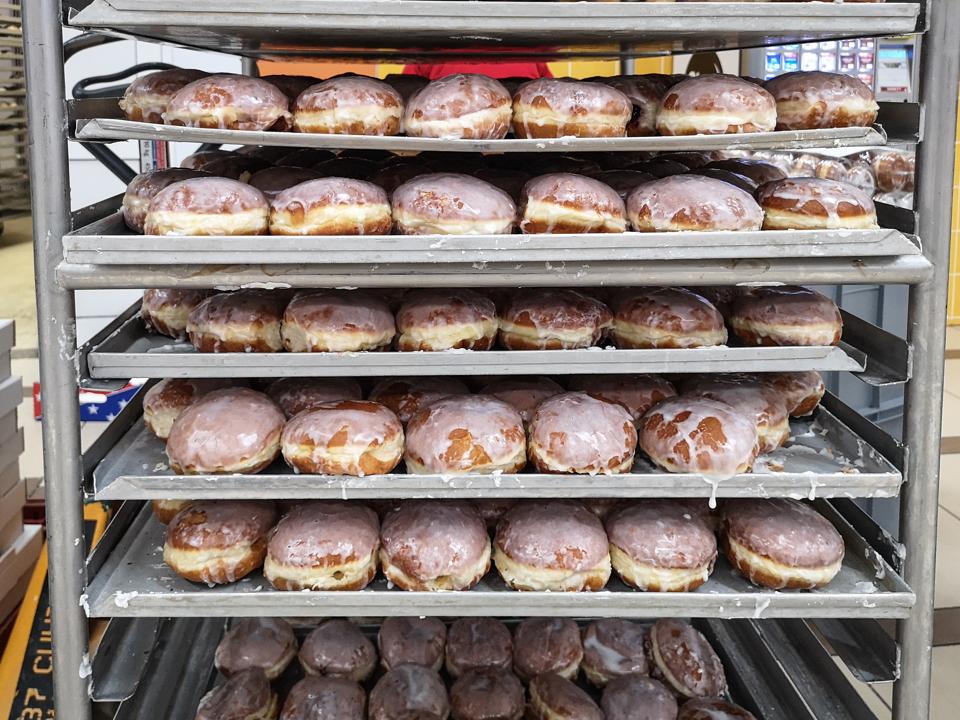 Poland’s pastry gift to America is getting bigger and bigger. (Photo by Michal Fludra/NurPhoto via … [+] Getty Images)

If your city has any sizeable Polish-American population, you’ve probably heard of paczki.

They are rich, jelly doughnuts that have traditionally been a Fat Tuesday treat. Customers line up at Polish bakeries to get boxes of paczki, which they share with their families and friends.

(By the way, the word is the same whether you are talking about an individual paczki or a box of paczki.)

But in many Midwest cities, Paczki (pronounced poonch-key) have pushed beyond Polish bakeries and into grocery stores, specialty markets, and gourmet shops that don’t have any real ties to Eastern Europe.

A number of places in the Detroit area began taking special orders weeks ago, helping customers skip the lines that are expected this week. And, bakers across the Midwest and other industrial cities are no longer sticking to traditional flavors such as prune, raspberry, plum and rose.

There are variations galore on paczki, including Nutella, strawberry cheesecake and sweet potato, and you can find gluten free and vegan ones.

I first wrote about paczki for FORBES in 2012, when their popularity began spreading, but even I was amazed to see how many are out there this year.

Amy Emberling, the managing partner for Zingerman’s Bakehouse in Ann Arbor, Mich, theorizes that as people of Polish-American descent have moved out of Polish enclaves and into other neighborhoods, they’ve introduced paczki to their friends and colleagues.

“It could also be that Americans are generally more interested in lots of historical and ethic foods and this is a fun and tasty one,” Emberling says.

While many people think of paczki as simply Polish jelly doughnuts, Emberling says there’s a special ingredient they may not realize is involved.

“It’s supposed to stop the dough from absorbing fat while they fry,” Emberling says. “We use it in ours.”

The Bakehouse usually offers doughnuts on weekends, and Emberling says its paczki capacity is limited to 3,000 pieces. “We are not a doughnut bakery, and so we aren’t quite set up to do large volume,” Emberling says.

To put that figure in perspective, Zingerman’s sells an equivalent number of pies during Thanksgiving, and it sells thousands of brownies and rugalach during December.

All kinds of flavors

There are plenty of places elsewhere in the Detroit area to get paczki, including traditional bakeries like New Palace in Hamtramck, the long-time Polish enclave, which has a long list of flavors on its website.

This year, New Palace is adding beer and pretzel to a menu of fillings that has included Cocoa Puffs, Fruity Pebbles and banana cream cheesecake. If you haven’t ordered early, you can expect a huge line. The doors there will open about 3 am.

Another Hamtramck business, Nosh Pit, is selling raspberry-filled vegan paczki, and Good Cakes and Bakes in Detroit is offering a vegan version.

What happens when you live in a place where paczki are not readily available? Veteran public radio executive Michael Leland says he began making his own about 10 years ago when he could not find them in Madison, Wisconsin.

Leland, now the news director of Iowa Public Radio, was planning to whip up paczki to take in to his office on Monday. The avid baker says the dough can be sticky, so the paczki can be time-consuming.

Meanwhile, I placed my pre-order for paczki from Plum Market in Ann Arbor, which had an elaborate menu on its website (pre-orders are now closed, but the chain will have paczki available for walk-in customers).

If you wanted to sample the latest riff on paczki, however, you may already be out of luck.

Detroit City Distillery quickly ran out of a limited run of paczki vodka on Saturday. The supply was gone in four-and-a-half hours, thanks to a line that stretched down the block in Eastern Market.

Eagle eyed shoppers might find some at liquor stores in Detroit or Chicago.

The Midwest paczki mania has the potential to rival what’s happened in New Orleans with king cake, the pastry that’s eaten between the Feast of the Epiphany and Mardi Gras day.

It’s morphed into all kinds of varieties including savory king cakes, king cake ice cream, coffee, and yes, alcohol. And an entrepreneur has turned king cakes into a successful marketplace.

Paczki has a ways to go before it reaches king cake status. But if this year’s excitement is any indication, more paczki opportunities abound.

Researchers Compared Vanguard And Fidelity Funds. Here’s What They Found

What Does Jeff Green’s Waiver Mean For The...