When Cheryl Johnson was a child, her mother would cover the kitchen table with index cards showing all the people who had died in Altgeld Gardens, their Chicago public housing complex.

The cards helped Hazel link many of the deaths to the fifty landfills and 350 contaminated sites within a mile-and-a-half radius. She called it a “toxic doughnut.” Even today, residents in Altgeld and nearby neighborhoods can expect to live sixty years on average, or thirty less than in downtown Chicago, fifteen miles to the north.

But Cheryl Johnson thinks Altgeld is worth saving, and she’s still trying to harness her mother’s activism to do it. She’s been lobbying for renewable power at Altgeld for thirty years. She wants it to help ease the affordability crisis that forces thousands of African Americans to leave the city every year and to make sure black Chicagoans don’t get left behind as the world embraces new technologies to fight climate change.

“We all know coal mining is on its way to being extinct,” Cheryl Johnson said. “The alternative is to look for more solar and less pollution. It should be available to everybody. It’s just a right.”

At age 58, Cheryl is closer to her goal than ever. 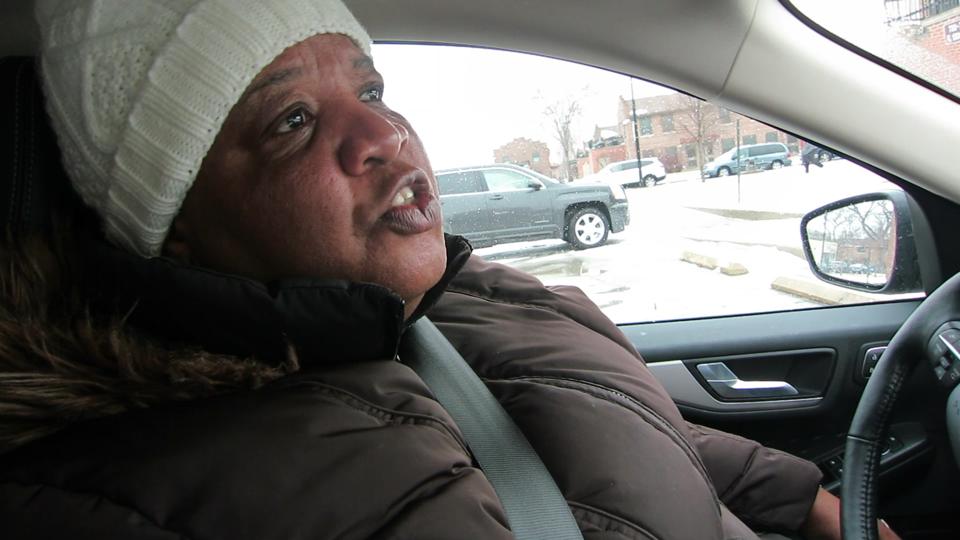 Cheryl Johnson wants to transform Altgeld Gardens into a green, sustainable community. “This is the … [+] only place I’ve ever lived,” she says.

The investments will make use of renewal power subsidies the state enacted four years ago when it began to break the grip of nuclear and coal utilities that in 2018 provided 55 and 32 percent of its electricity, respectively. The legislature will vote this spring on whether to expand renewable subsidies and Governor J.B. Pritzker, a Democrat, has promised support. Renewables provide eight percent of Illinois power, half the national average.

To many people, solar power is already a proven and scalable technology.

In his new book Falter, environmentalist Bill McKibben says solar power cost 30 cents a watt in 2018. That’s the cheapest alternative in most of the world and compares to $100 a watt half a century ago.

McKibben showcases Tanzanian villages where newly installed solar micro-grids mean people can taste cold water for the first time and watch football on TV. The micro-grids could allow Africans to avoid the expense of long-distance transmission lines, just as they went straight to wireless telephones.

But Illinois built its grid to haul power from centralized fossil plants a century ago. For now, the intermittent and dispersed power of the sun has a hard time competing on this grid, at least not without the same subsidies fossil fuels have received all along.

With state subsidies, solar panels atop large suburban warehouses can meet investor demands to pay for themselves in eighteen months, said Will Kenworthy, managing director at Vote Solar, a non-partisan lobbying group in Oakland, California. With no state aid, he said, they may not reach this threshold for ten years.

“Teslas are here, but they’re not affordable for everyday working families. The same is true with solar,” said A.J. Patton, president of 548Capital, which uses solar and heat-saving windows and insulation to rent out affordable apartments. “When we think solar, we don’t think South Side,” Patton said. “We think of the North Shore and Wilmette. We still have to do a lot of investment so that this divide can be crossed.” 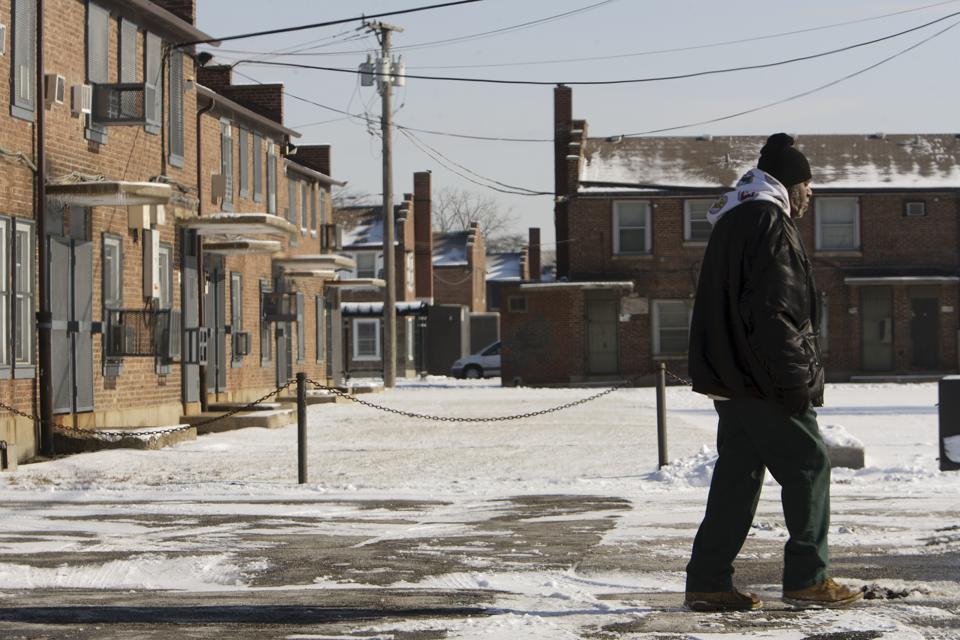 Altgeld Gardens is located at the very southern tip of Chicago, amid a network of swamps, rivers, and lakes that industry has been polluting since the Civil War.

During a driving tour with Cheryl Johnson, the first thing you see is an apartment complex built atop a cyanide-laced sewage plant opened by the Pullman Palace Car Company in 1880. Next comes a rusting steel mill from 1918. Then you approach landfills that loom over the I-94 freeway. After that, you notice heaps of pet-coke, an oil by-product. As you circle back toward Altgeld, you see a wastewater treatment plant that opened in 1922. “When rain fills up those sludge beds, it’s just a terrible smell,” Johnson said.

The spookiest sight is a tranquil group of ponds called the Paxton Lagoons. In the 1980s, Johnson said, city inspectors found 30,000 pounds of toxic waste in the water. The only things they could identify were baby sharks and pigs pickled in formaldehyde. They’d been dumped there, apparently, by a local medical school.

It’s here the city of Chicago built Altgeld Gardens for returning African American service members in 1945. Cheryl Johnson’s mother moved there when Altgeld started accepting non-veterans in 1962. The neighborhood was booming with high-paying jobs, even for black people. But Chicago was still a Jim Crow town.

As Johnson and her siblings ventured north along Michigan Avenue toward the integrated movie theater, white people pelted them with bricks, bottles, and racial slurs. As she headed back to Altgeld, she thought of it as a sanctuary.

“It was the most beautiful place in America,” Johnson remembers. “The landscaping was immaculate. We had social services. We had a shoe store, a grocery store and a pharmacy. We didn’t really need to go out.”

Cheryl’s mother Hazel grew up in New Orleans, in a place called “Cancer Alley,” where three siblings died before their first birthdays. She didn’t graduate high school but began studying pollution after hearing on TV that southeast Chicago had the city’s highest cancer rate. Hazel’s husband John had already died of lung cancer at age 41. 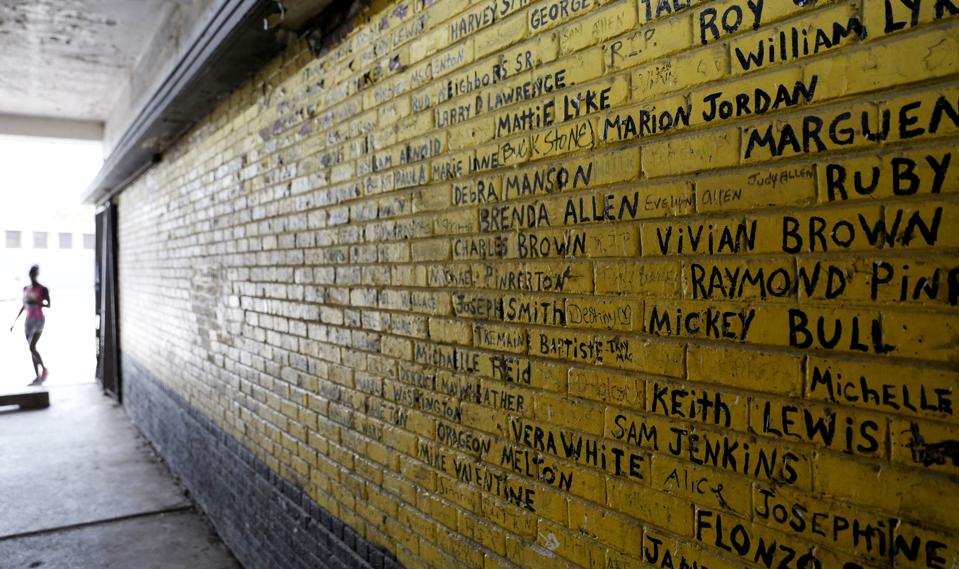 People in Altgeld Gardens in Chicago used the Yellow Brick Wall to commemorate their dead. Many died … [+] from diseases caused by industrial pollution.

As index cards of the sick and dying multiplied and outrage grew, people started painting names of the dead in a public concourse known around Altgeld as the Yellow Brick Wall. And Hazel started organizing.

In 1984, the city installed water and sewer lines in the streets near Altgeld after well water tests she’d demanded revealed cyanide and PCBs. This precise place had been a significant stop on the Underground Railroad before the Civil War.

Hazel joined with Barack Obama, a young community organizer, to get asbestos and lead paint removed from Altgeld buildings. She fought for a library, a health clinic, and even a man-made lake so Altgeld residents could go fishing. She stood in the Oval Office as Bill Clinton signed an executive order promising environmental justice to black, brown, and low-income communities.

But by then, many of the Chicago factories that had helped win two World Wars had collapsed. Most of the white people at the south end of town were gone, too. Street gangs were fighting block-by-block to control the Altgeld drug trade. “When the mother gets involved, the family structure changes tremendously,” Cheryl Johnson said. “When that happens, the children aren’t getting fed. All the money is going for crack cocaine.”

Hazel died in 2011, and Cheryl has been executive director of her non-profit group, People for Community Recovery, ever since. She’s staying in part because affordable housing is hard to find on the South Side. At Altgeld, monthly rents range from $1,300 to as low as $75 for those who qualify. But it’s more than that for Cheryl. “This is the only place I’ve ever lived,” she said. “It’s a good community if only the city and the state would invest instead of letting it go.” 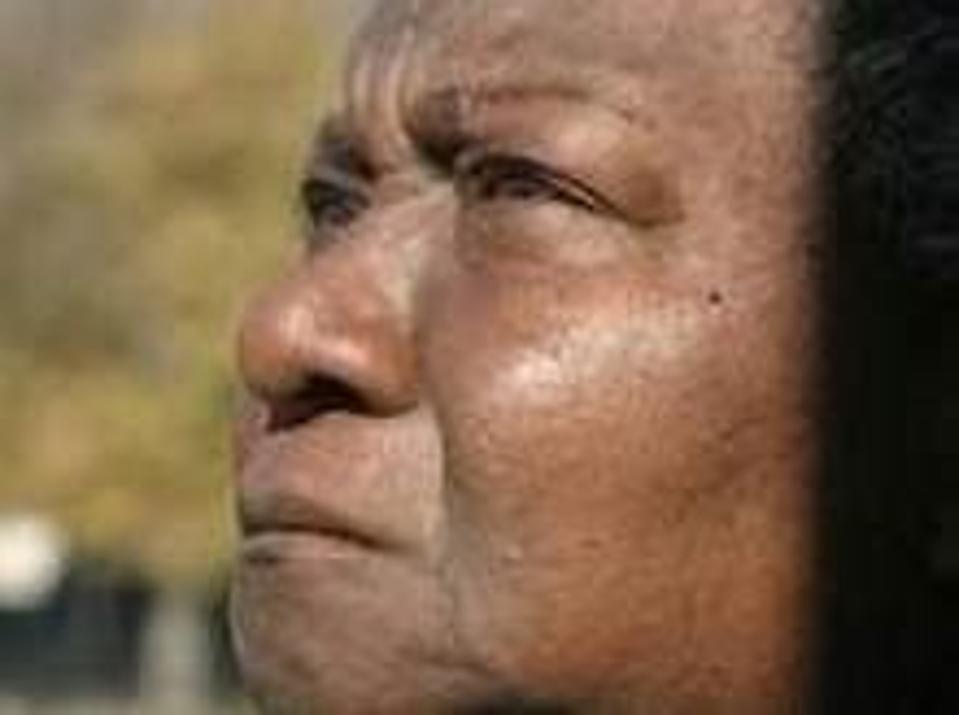 Hazel Johnson stood in the Oval Office in 1994 when Bill Clinton promised environmental justice to … [+] black and brown communities.

Cheryl is still fighting pollution. “Just getting these companies to follow their permits would be a tremendous victory,” she said. Ultimately, she wants to transform Altgeld into “a green sustainable community” that generates solar and wind electricity, and trains residents for jobs in renewable power, energy efficiency, and environmental remediation. Toward that end, she helped write the Clean Energy Jobs Act (CEJA), which the Illinois legislature will consider this spring to extend, among other things, the solar subsidies she’s hoping to tap for Altgeld.

CEJA builds on the 2016 legislation that included $220 million a year in renewable subsidies. This legislation funded thousands of solar projects around the state, but Chicago lost out in a selection process that, in some cases, involved lotteries. For some projects, Commonwealth Edison charged two or three times more to connect solar to the grid than utilities in other states. ComEd has been Chicago’s sole electricity supplier since 1947.

CEJA would quadruple solar subsidies and give Chicago more weight in the selection process, said Colleen Smith, legislative director for the Illinois Environmental Council, a coalition of ninety grassroots groups.

More importantly, Smith said, CEJA would put the state on a path to eliminate coal-fired electricity by 2030 and nuclear plants by 2050, and to assist communities affected by such closures.

Illinois exports a fifth of its electricity to other states. But the state will need additional generating capacity as coal and nuclear plants close, and as the climate gets hotter. July 2019 was the earth’s warmest month on record.

In some ways, the state’s decision to phase out coal and nuclear means bowing to the current cheap price for natural gas. But ComEd’s legislative grip has also been weakened by scandal. Federal authorities are investigating whether the utility made illegal payments while lobbying Springfield lawmakers. During his State of the State speech in January, Governor J.B. Pritzker promised to root out corruption. And, he said, “I’m not going to sign an energy bill written by the utility companies.”

Wielding another hammer, Chicago Mayor Lori Lightfoot is renegotiating the city’s franchise agreement with ComEd for the first time since 1992. She’s considering, among other things, whether to create a city-owned utility like Los Angeles.

Meanwhile, the Chicago Housing Authority is proceeding with solar plans for Altgeld using the tail end of state subsidies authorized in 2016, plus federal tax credits. As in a template established at its Dearborn Homes complex in Chicago last year, the authority would find a solar developer who’d build the system at its own expense and get paid via a long-term purchase agreement. “Putting clean energy and renewable projects close to communities that have a history of environmental injustice would be a way to balance that scale,” said the CHA’s Ellen Sargent.

Mayor Lori Lightfoot supports the effort as part of her campaign to power all city buildings with renewable electricity by 2025, and electrify the bus fleet by 2040, a spokesperson said.

Anthony Beale, the alderman for Altgeld Gardens, isn’t so sure. The CHA now spends $1 million a year on electricity at Altgeld and hopes solar will cut this expense by ten percent, Sargent said. Since the CHA pays just one electric bill for the entire complex, it can’t pass on the savings directly to residents. Beale said he wouldn’t support the project until he’s sure the savings will go to residents and not the CHA itself. Cheryl Johnson has a related concern. “We can’t let the developer make the money and not leave anything here,” she said.

For Cheryl Johnson, such vigilance and the homegrown renewable energy that’s within her grasp are indispensable tools for breaking what she calls the ‘mental slavery” from which black and brown communities have long suffered.

“I’ve never been a taker,” she said. “We do outreach and support to empower people to not be dependent on the society that has continued to oppress us for over 500 years.”