Breaking
ESG Metrics: A Path Forward For Companies
‘Moriarty The Patriot’ Makes A Hero Of Holme’s...
Mind The 99 Year Gap: How To More...
The WFH Revolution: How Covid-19 Is Changing The...
eToro Announces Staking For Cardano And Tron
Fintech Startups: Plan For Your Customers’ Emotional Realities
The End Of Third-Party Data — Finally
The Scientologist Billionaire Trying To Make A New...
Mission-Driven Fintech Kontist Shakes Up The Future Of...
What Can The Simple Fact That ‘We Exist’...
Stock Market: Here Comes October With Scary Tricks...
Farmers, College Students, And Food Banks Across The...
Thinking Of Writing A Book To Grow Your...
Microsoft Security Report Highlights New Sophisticated Threats From...
3 Steps To Help You Build Entrepreneurial Confidence
SMB Fintech Darling Kabbage To Be Acquired By...
Home Business Asics, Gael Monfils Debut Completely Updated Gel-Resolution 8 Tennis Shoe
Business 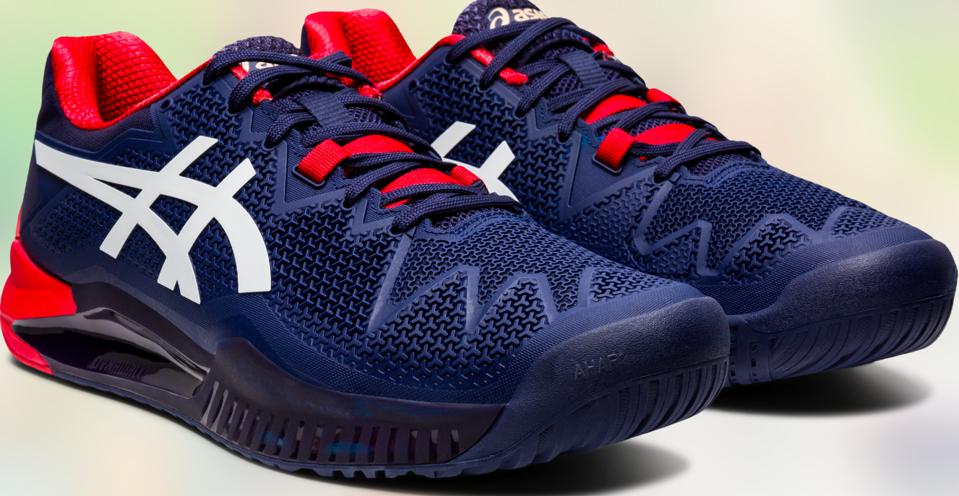 From a redesigned upper meant to improve flexibility on the brand’s premier stability offering to reimagined grooving on the outsole, Clarke, a self-professed “product nerd,” says every detail of the silhouette was examined, tested and thought out. And it all came with help from ATP star Gael Monfils and scientists at the Asics Institute of Sports Science in Japan.

A fresh take on grooving for the outsole of the Asics Gel-Resolution 8 tennis shoe.

The redesign starts at the top, with a new upper pattern designed for 360-degree movement instead of simply side-to-side movement. The Gel-Resolution 7 already featured ventilation where the PU upper was cut away in a horizonal manner, but the Gel-Resolution 8 uses a pattern akin to an inverted triangle to sipe away the PU for flexibility in all directions. Clarke says the design still allows for needed protection, but without feeling stiff or bulky. The tooling also allows for a wider fit and for additional full-court contact on the bottom of the shoe.

The new design includes what the brand calls Dynawall, which wraps from the medial to lateral side, using a hard TPU piece to act as a brace and help the athlete “brake” when moving and keeping the upper over the midsole. “There is less of a liability to roll an ankle,” Clarke says. “It is a protection piece.” In a similar manner, an extended heel counter helps athletes who move aggressively stay secure in the shoe. The new lacing system allows for a customized fit and feel during aggressive side-to-side movement but can also prove comfortable for wearers wanting to lace their shoes extra tight. Asics achieves this by using internal panels — dubbed Dynawrap — tied to shoelaces for the extra control and security.

Even with the updated flexibility, the brand says lab testing shows the updated version offers more than 7 percent more braking force to enable quicker recovering. “From a design standpoint, we designed this model for stability,” Clarke says. “The Gel-Resolution is the king of stability.”

The Asics Gel-Resolution 8 tennis shoe includes new technology in virtually every aspect of the … [+] construction.

On the outsole, Asics reimagined the groove patterns. Vertical grooves at the top of the shoe help an athlete to kick back and gain power. A diagonal pattern helps control the slide and the stop and wider grooves enhance the twist motion, helping athletes recover quickly. The three pivot points on the outsole were also made thicker and more durable.

Asics has sold tennis shoes since 1952 and has playing styles have evolved, becoming more physical each year, the shoes have adapted. The goal is always to allow more time for the wearer and a shoe that allows an athlete to recover faster and get back into position does just that.

Asics worked with Monfils, a powerful player known for his constant movement, sliding and jumping. “He was influential in the design choices, the material choices,” Clarke says. “He was really integral in the update process. We did testing with him Japan, he sent feedback and tested multiple versions of the shoe.”

MORE: Asics Experiments With Runners To Show Off Energy-Saving Midsole

“Shoes are very important, I need to trust them and the first thing I look for in tennis shoes is stability,” says Monfils. “Stability and comfort. It’s no secret that I am an extreme mover on the court, and with these shoes I feel confident and balanced to return any shot.”

Clarke says the decision to revamp the Gel-Resolution 8, one of the brand’s top-selling tennis sneakers and the leader of their stability line — the Court FF 2 serves as the pinnacle Asics shoe, worn by Novak Djokovic and known for speed, while the entry-level Gel-Dedicate is the brand’s top-seller — came from a desire to improve the line based on consumer feedback while keeping an eye on trends in the industry. The new model comes in a wide design and in both a hard court and clay court version. 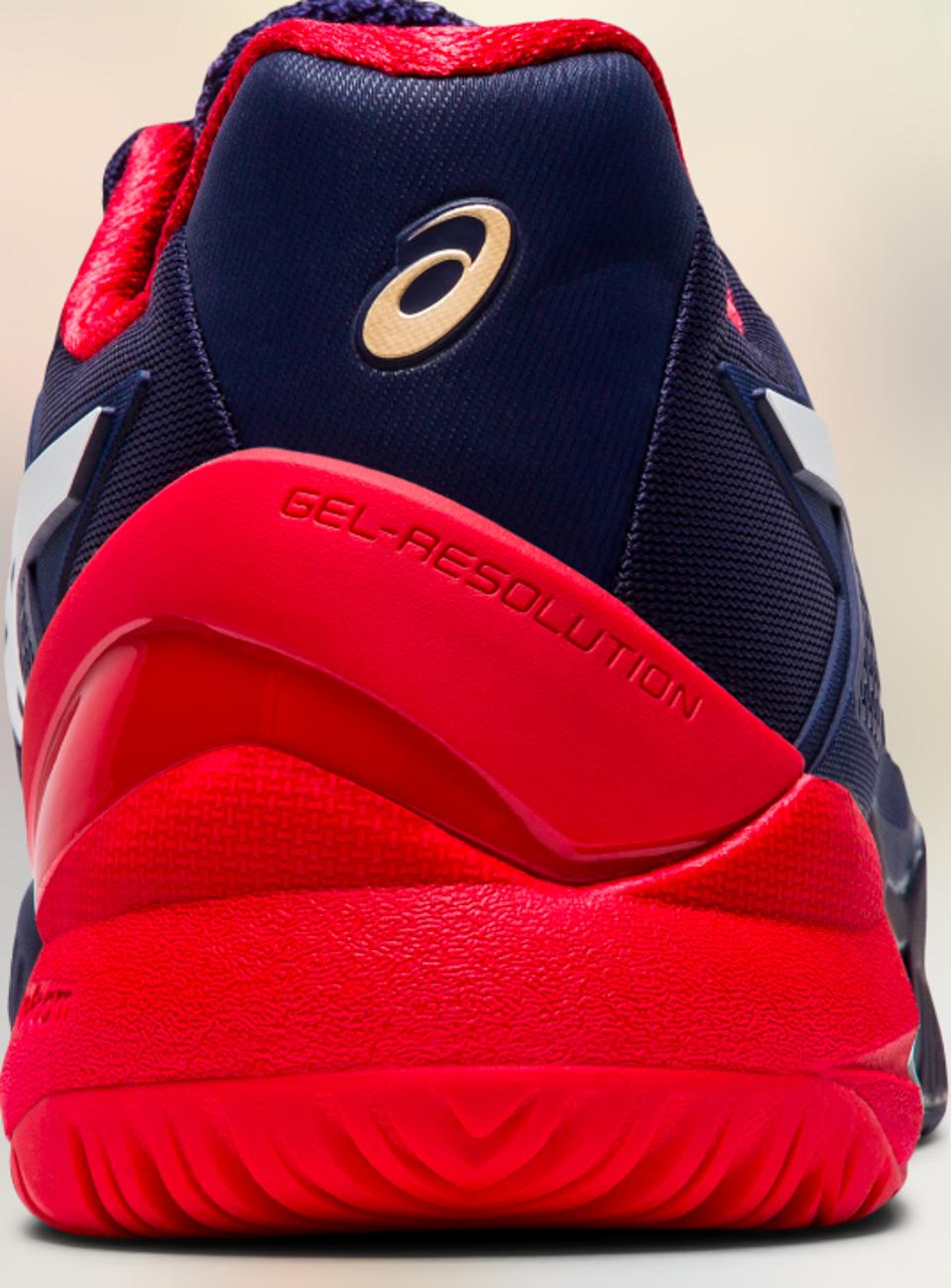 The new heel counter on the Asics Gel-Resolution 8 tennis shoe.

The Gel-Resolution 8 aimed to provide more room in the forefoot, offer more flexibility and improve cushioning all while becoming more modern visually. “It just looks like a really cool shoe that you might pull off the wall,” Clarke says. “It is modern and fresh in terms of styling, but accounts for issues athletes might have.”

While the updated version has some of the same aesthetic language as the previous model with the Tiger stripe branding and star-shaped material patterns, adding a semi-clear wall offers a more “aggressive” approach so consumers can see into the midsole and the brand can highlight the technology. “It looks sleeker and is more aggressive versus the prior shoe,” Clarke says.

Asics already has plans to roll out new colorways of the Gel-Resolution 8, soon keeping three colors for men and three for women on hand and introducing special additions throughout the year.

“We have put a lot of attention on this model,” Clarke says, “knowing it was one of the most important in our line.”