Breaking
Can You Settle Your Student Loans Or Negotiate...
How to Use Amazon Attribution For Ad Campaigns
How To Quickly Start And Scale Your Business
Terra Virtua: What NFTs Can Teach Us About...
5 Easy Steps To Prepare Content For E-A-T...
Physical Inactivity Linked To More Severe Covid-19 Infection...
The 2021 Estimated Tax Dilemma: What Tax-Return Pros...
Want To Digitally Transform Your Business? Start With...
How to Optimize Google My Business and Leverage...
Debunking Link Building Myths in 2021
How, When And Where You Can Gaze At...
SBA Opens $16.2 Billion Shuttered Venue Operators Grants...
What are the Essential Features of a Small...
Trends In Executive Recruiting That Will Help You...
The Growing Case For Banning Pesticides Linked To...
The Reopening High – But Long-Term Issues Cloud
Home Technology Ask Ethan: Can We Extract Energy From Gravitational Waves?
Technology 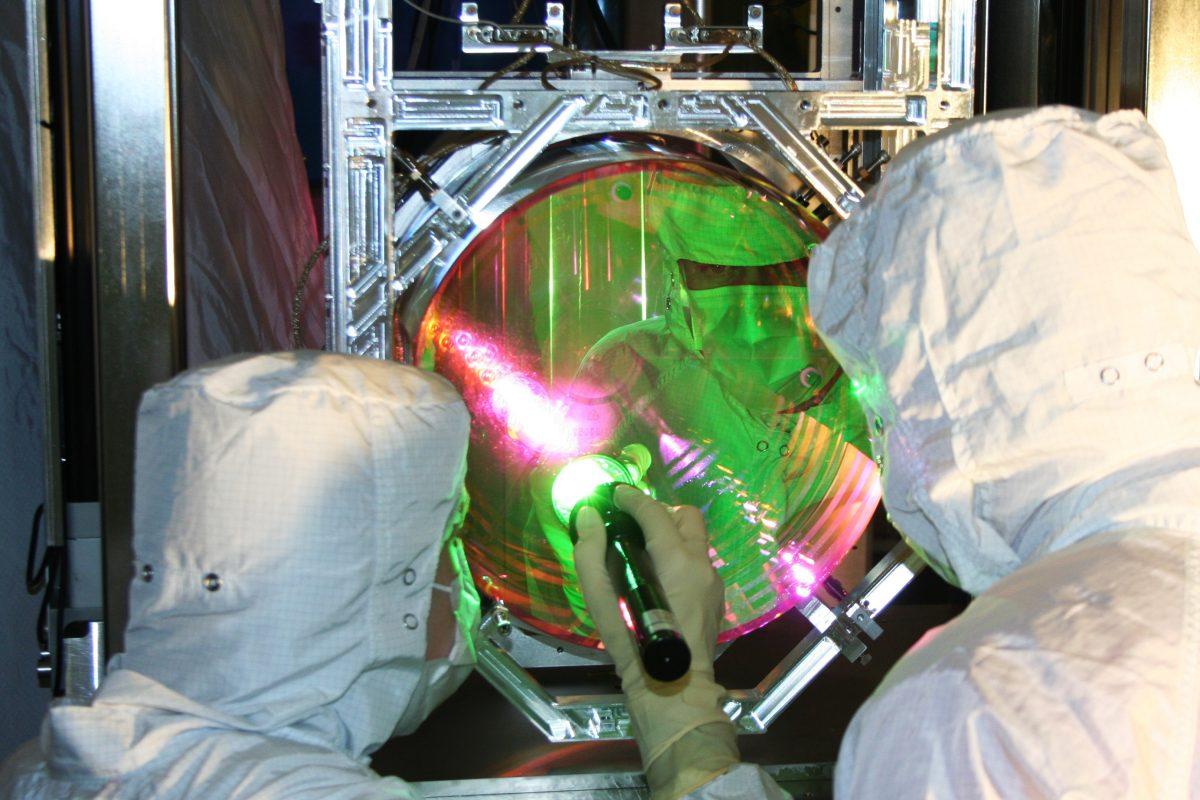 The coated and cooled mirrors in the advanced LIGO experiment, shown here, are responsive to each… [+] and every photon that strikes them. The detection of a gravitational wave is reliant on the changing position of the mirror and the ensuing change in the photon path-length that it experiences due to the passing-through of a gravitational wave.

Whenever any two things in the Universe interact at the same location in spacetime, one thing always remains true about that interaction: it conserves energy. But what if one of those things is an entity inherent to the fabric of spacetime itself, like a ripple, also known as a gravitational wave? When a gravitational wave interacts with matter, energy, or a complex apparatus like a gravitational wave detector, can the wave itself transfer energy into whatever it’s interacting with? It’s a fascinating thought, and it inspired Patreon supporter Paweł Zuzelski to ask the following question:

When we detect an electromagnetic wave (be it a radio antenna, an eye or a camera sensor) we extract energy from the wave. Does the same happen for gravitational waves?

This graph, of photon energy as a function of electron energy for an electron bound in a zinc atom,… [+] establishes that below a certain frequency (or energy), no photons are kicked off of a zinc atom. This is irrespective of intensity. However, above a certain energy threshold (at short enough wavelengths), photons always kick electrons off. As you continue to increase the photon energy, the electrons are ejected with increasing velocities.

It might seem counterintuitive, because we use the term all the time, but what does “energy” actually mean? There are many ways to define it, but physics is always interested in the quantitative meaning of terms: “what is it doing” and “by how much” are the answers that we hope a good definition will reveal. For energy, some of the more common ones are:

It comes in many different forms — potential (stored), kinetic (of motion), chemical (of electron bonds), nuclear (released from atomic nuclei), etc. — but it’s universal to all forms of matter and radiation.

Electron transitions in the hydrogen atom, along with the wavelengths of the resultant photons,… [+] showcase the effect of binding energy and the relationship between the electron and the proton in quantum physics. Hydrogen’s strongest transition is Lyman-alpha (n=2 to n=1), but its second strongest is visible: Balmer-alpha (n=3 to n=2).

It’s relatively straightforward to consider that energy is carried by electromagnetic waves, as that’s perhaps the most well-understood form of radiation that we know of. Electromagnetic waves, from gamma rays through visible light all the way into the radio part of the spectrum, not only interact with matter and transfer energy, but do so in the form of individual energy packets: quanta, in the form of the photon.

We extract and measure the energy of individual photons all the time with modern technology. It was Einstein who first did the critical experiment, showing that even a tiny amount of ultraviolet light could kick electrons off of a conducting metal, but that longer-wavelength light, no matter how intensely it shown, wouldn’t kick those electrons off at all. Light was quantized into little packets of energy, and that energy could be transferred to matter and converted into other forms of energy.

The photoelectric effect details how electrons can be ionized by photons based on the wavelength of… [+] individual photons, not on light intensity or total energy or any other property. If a quantum of light comes in with enough energy, it can interact with and ionize an electron, kicking it out of the material and leading to a detectable signal.

Today, we recognize that light is both an electromagnetic wave and a series of particles (photons), and that in both pictures it carries the same amount of energy. It helps us to understand how everyday phenomena occur within the context of energy.

Large-area CCDs are incredibly useful for gathering and detecting light, and for maximizing each… [+] individual photon that comes in. The interactions between individual photons and the electrons in the array is what triggers an electronic signal in the detector.

But there may be differences, too. Electromagnetic waves exhibit inherently quantum behavior, as the energy in those waves is quantized into individual photons that compose this light. Gravitational waves may exhibit quantum behavior, and these waves may yet be quantized into individual particles (gravitons) composing these waves, but we have no evidence for this picture and no practical way to test for it.

But one thing that must be true — whether gravity is inherently a quantum force or whether Einstein’s General Relativity is as fundamental as it gets — is that these gravitational waves must carry energy. This is not a trivial conclusion, but there are three pieces of evidence that led us there: one advance that was theoretical, one class of indirect measurement, and one type of direct measurement that closed all the remaining loopholes.

Remember, although they were predicted way back in the mid-1910s, nobody knew whether gravitational waves were physically real or whether they were just mathematical predictions without a physical analogue. Were these waves real, and could they transfer energy into real, measurable particles? In 1957, a the first American conference on General Relativity, now known as GR1, took place. And Richard Feynman, one of the great pioneers of quantum field theory, came up with what’s now known as the “sticky bead argument.”

Imagine that you had a thin rod (or two thin rods that were mutually perpendicular) with two beads on either end of the rod. One bead is fixed to the rod and cannot slide, but the other one is free to move relative to the rod. If a gravitational wave passes through perpendicular to the rod’s orientation, the distance between the beads will change as space stretches-and-compresses due to the gravitational wave.

But now let’s introduce something else: friction. Realistically, two macroscopic objects in physical contact with one another will experience collisions and interactions — at least between their electron clouds — meaning that the bead-rod system will heat up as the bead moves along the rod. That heat is a form of energy, and the energy must come from somewhere, with the only identifiable culprit being the gravitational waves themselves. Not only do gravitational waves carry energy, but that energy can be transferred into systems made of normal, everyday matter.

When a gravitational wave passes through a location in space, it causes an expansion and a… [+] compression at alternate times in alternate directions, causing laser arm-lengths to change in mutually perpendicular orientations. Exploiting this physical change is how we developed successful gravitational wave detectors such as LIGO and Virgo.

The next leap forward came from the observation of binary pulsars: two neutron stars that not only orbit one another, but where both of them emit radio pulses with every rotation that we can successfully observe here on Earth. By measuring the properties of these pulses over time, we can reconstruct what the orbits of these neutron stars are, and how those orbits change over time.

Remarkably, we found that the orbits were decaying, as though something were carrying their orbital energy away. The calculations from General Relativity (solid line, below) and the observations (data points, below) aligned to confirm the explicit, quantitative predictions for the energy carried away by gravitational waves. Not only must these gravitational waves carry energy, but the explicit predictions for how much energy they carry away from a source was validated by first one, and now many, orbiting binary systems.

From the very first binary neutron star system ever discovered, we knew that gravitational radiation… [+] was carrying energy away. It was only a matter of time before we found a system in the final stages of inspiral and merger.

But there was still one remaining step to be verified: what about the transfer of energy from gravitational waves into matter? That would be the key step that would need to occur for gravitational wave detectors — such as the National Science Foundation’s LIGO — to work. From a billion light-years away, two black holes of 36 and 29 solar masses merged, converting about three Suns worth of mass into pure energy.

By the time those waves arrived at Earth, they had spread out so only 36 million J of energy impacted the entire planet: about as much energy as Manhattan receives from 0.7 seconds worth of sunshine. The mirrors in LIGO’s detectors were moved by less than a thousandth of a proton’s width, altering the light paths and changing the photon energy ever-so-slightly. Less than a microjoule was deposited in each detector. And yet, that was enough to lead to a robust detection, not just the first time, but for more than 50 independent occurrences now.

The only way you can ever directly detect a gravitational wave — or any signal, for that matter — is if it has a physical effect on the system you’ve set up to measure it. But all of our detection systems are made of matter, and causing a physical change in that system is tantamount to changing its configuration: something that requires an input of external energy. Regardless of the method involved, detections always require the deposition of energy.

In order for gravitational wave detectors to work, three things had to be true. Gravitational waves had to carry energy, that energy needed to be generated in sufficient amounts that it could affect a detector by the time it arrived at Earth, and we needed to build a sufficiently clever detector to extract that energy and turn it into an observable signal. Remarkably, from the first inkling of an idea to direct detection, it only took a century for humanity to get there.

Send in your Ask Ethan questions to startswithabang at gmail dot com! Source