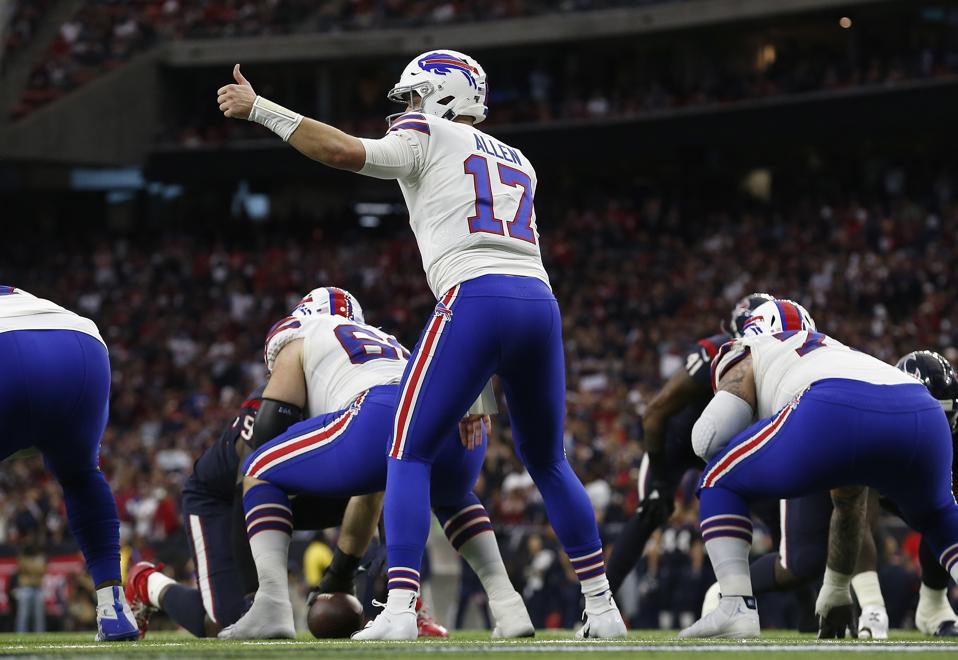 HOUSTON, TEXAS – JANUARY 04: Josh Allen #17 of the Buffalo Bills signals at the line of scrimmage in … [+] the first half of the AFC Wild Card Playoff game against the Houston Texans at NRG Stadium on January 04, 2020 in Houston, Texas. (Photo by Tim Warner/Getty Images)

Buffalo Bills coach Sean McDermott and general manager Brandon Beane addressed the media on Tuesday, and they walked a fine line in doing so.

They had to appease the Bills fans with blunt, honest talk about how the club failed in the wildcard game, and they didn’t duck any criticism, even when it came to discussing franchise quarterback Josh Allen. They also had to assure the fans, some of whom are the most passionate in the league, that they have a concrete plan to patch up the weaknesses (offense, mostly).

On the other hand, McDermott and Beane had to be careful not to risk alienating some of their most important players with criticism that would damage those relationships.

In the end, both the players and executives have come away with the right attitude. The players know they have to be better. Josh Allen himself showed maturity at age 23 by putting the blame on himself, although he was not the only one who cost the Bills the game against Houston.

Beane said that from the beginning of the season, Allen “improved in a lot of areas.” But he added: “Is he perfect? Is he where he wants to be? Is he where we want him to be, no. But he’s got the DNA to continue to improve, and I have no doubt that he is disgusted, as we all are, that we didn’t finish that game and come out with a win.”

The big knock on Allen all season was that he’s trying to play “hero ball” by taking it upon himself to try to make plays himself instead of using the skills of his teammates.

Beane acknowledged that. “Sometimes Josh…he wants it so bad that sometimes he tries to do too much. I think he tried to put all 45 players on his back and do things he shouldn’t do.”

Beane said that when Allen saw Houston QB Deshaun Watson making great plays for his team, Allen wanted to raise his own game because of the fiery competitor he is. But on the other hand, the GM said that he would rather have that kind of quarterback than a timid one who is checking down all the time.

The Bills raised everyone’s expectations this season with a 10-6 record, and then when Buffalo jumped out to a 16-0 lead by the third quarter in the wildcard game, the Bills looked like they were in a position to finally win their first playoff game since 1995.

The Bills took their medicine and didn’t try to make any excuses. Yes, it’s talk for now. But in the short time that Beane and McDermott have been in Buffalo, since 2017, they have been building this organization in a smart and methodical way.

Last season, the Bills made a lot of changes, especially to the offensive line, and one could argue that it took too long for the team to become a cohesive unit. But change is necessary. There will no doubt be changes in personnel for next season. They may need a new offensive coordinator because Brian Daboll has been interviewed for the head coaching job in Cleveland.

Running back Frank Gore is likely gone. He will be 37 by the time the next NFL season begins.

And of course linebacker Lorenzo Alexander retired following the playoff lost. Defensive end Jordan Phillips, who had a career year in sacks, will likely be gone in free agency.

The Bills’ No. 1 priority will be getting a No. 1 wide receiver, who can take the pressure off undersized receivers John Brown and Cole Beasley. The club lacked a deep threat all season, and Josh Allen never really looked comfortable throwing long, even though he’s got such a strong arm.

The Bills have about $90 million in cap space to add to their personnel for next season. They also have nine draft picks in 2020 and pick No. 22 in the first round. Of course, Beane may work some deals to move up by draft time.

Some fans are suggesting names they’d like to see lining up at wide receiver, such as A.J. Green or Clemson’s Tee Higgins.

The year-end news conference ended the way it should have: leaving everyone with the sense that the Bills were not satisfied with how their season ended up. And that’s why some are suggesting that with Beane and McDermott leading the charge, the Bills organization is as stable as it’s been in 20 years.

‘Hunters’ Review: A Pulpy Thriller Worthy Of Its...

The United Kingdom’s Role In The Future Of...

United Airlines To Washington: Bail Us Out Or...

Oil Markets Plunge On Coronavirus Fears, But Will...