Breaking
Everything You Need to Know About Corporate Social...
Is Adaptive Leadership the Key to Motivating Employees?
Why business events are set to return with...
Business events set to return with a bang!
Expanding Internationally: 5 Things to Consider for eCommerce...
How the Machine Shop Is Going Digital in...
Sustainable Food Packaging Is Helping the Hospitality Sector...
Top 5 Investment Practices To Make More Money...
Managing IT Requirements for SMEs: 5 Aspects that...
How To Build a Successful Luxury Brand In...
Finding The Best Google AdWords Consultant for Your...
8 Top Tips To Help Your Agricultural Business...
Three Reasons Why Office Décor and Design Are...
Looking To Improve Efficiency In Your Business? Here’s...
AI and machine learning for business
How Social Media Changed the World
Home Business Atlanta Falcons Announce Plan For New Uniforms For 2020 Season
Business 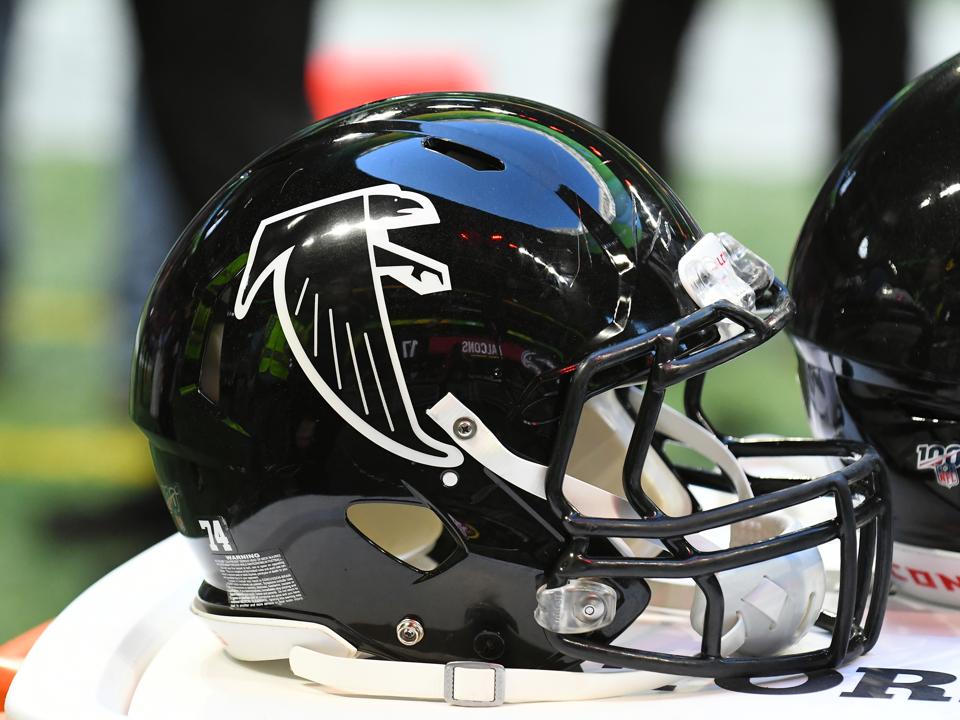 ATLANTA, GA – OCTOBER 27: Atlanta Falcons football helmet during the NFL game between the Seattle … [+] Seahawks and the Atlanta Falcons on October 27, 2019, at Mercedes-Benz Stadium in Atlanta, GA.(Photo by Jeffrey Vest/Icon Sportswire via Getty Images)

It turns out that we won’t see just two NFL teams make changes to their uniforms for the upcoming 2020 season. In addition to the Los Angeles Rams marking their move into SoFi Stadium with a new look and the Cleveland Browns choosing to get rid of their current uniforms as soon as possible, the Atlanta Falcons have also decided that it’s time for a change.

In a letter to the fans from team owner Arthur Blank himself, the Falcons revealed that they’ve actually been working with Nike over the past two years to come up with a new uniform design going forward. They also claimed that they were listening to the “feedback” from fans who have been clamoring for a new look. It’s an understandable complaint — Atlanta’s current uniforms were clearly created with design trends from the aughts.

It’s a uniform that was perfect for the period in time when it made its debut. However, it’s also a look that hasn’t aged particularly well in the years that it’s been around. The Falcons also decided to distance themselves from the black jerseys and black pants that were commonplace in the early days of this uniform set, which meant that the team had a mostly predictable look and limited options when it came to color combinations. 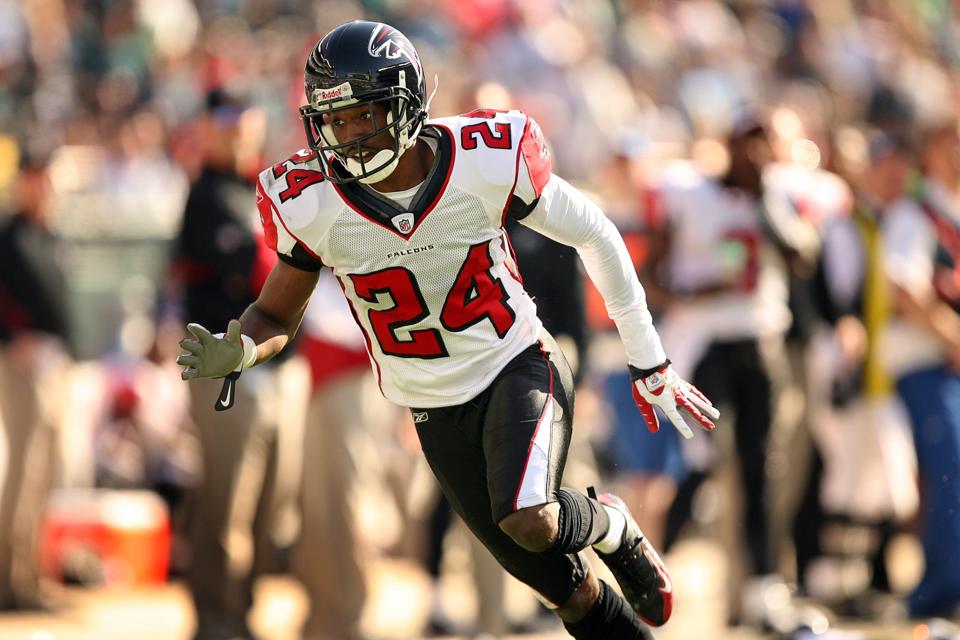 The Falcons have not worn their long-lost black pants since 2008. (Photo by Hunter Martin/Getty … [+] Images)

As of late, the only real break in Atlanta’s uniform monotony came whenever the team broke out their throwback look. The most recent throwback look actually saw them utilize a new combo in their uniform history, which was to simply pair the ‘90s-era helmets with their 1966 throwback look. The Falcons also went down a throwback path with the Color Rush uniforms that the team wore for one game during the 2017 season. 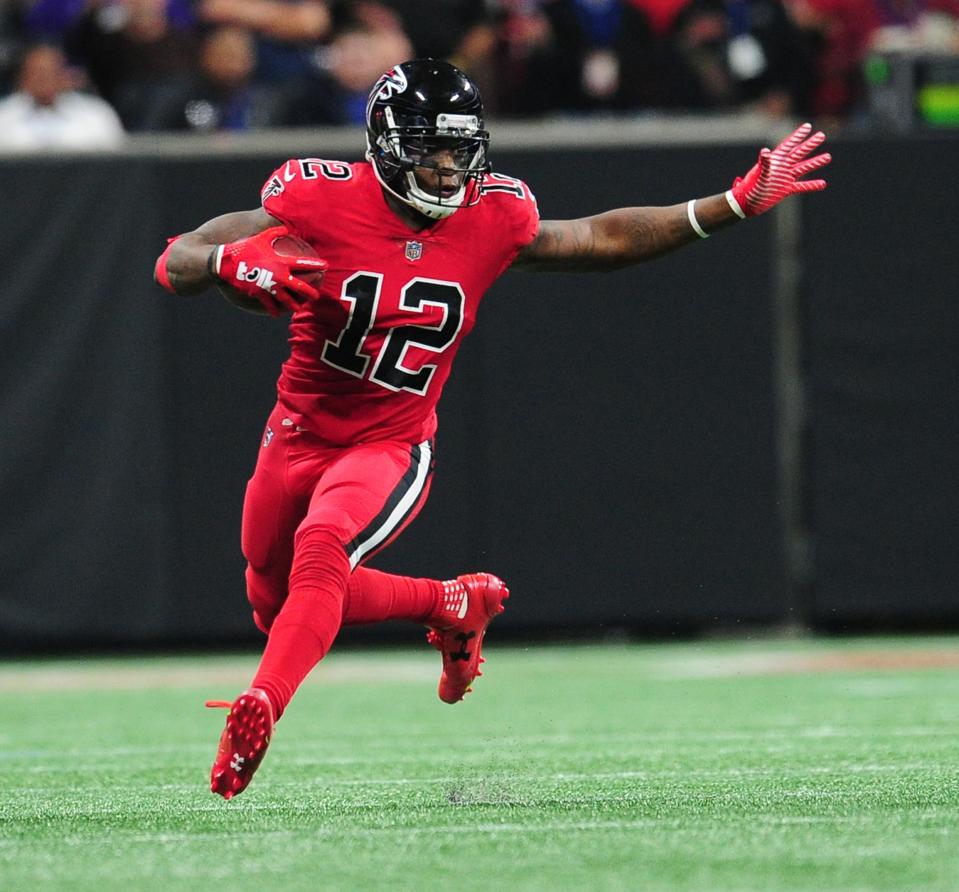 ATLANTA, GA – DECEMBER 7: Mohamed Sanu #12 of the Atlanta Falcons runs with a catch against the New … [+] Orleans Saints at Mercedes-Benz Stadium on December 7, 2017 in Atlanta, Georgia. (Photo by Scott Cunningham/Getty Images)

The main takeaway is that the Falcons often looked towards the past whenever they decided to switch things up with their uniforms. The team also went down memory lane when they announced that the new uniforms were coming soon. If you’re not going to take the time to visit the Falcons’ uniform history over on Gridiron-Uniforms.com, then this is a nice refresher.

While this is absolutely not a guarantee that the Falcons are going to go with a more traditional look once April rolls around, it does seem like they’re trending towards that direction. It also seems like new football uniform designs in general are trending towards more basic striping patterns than in the past. Both the Rams and Browns are planning on moving to a simpler look, the Jaguars gave their look a massive simplification ahead of the 2018 season and the Lions stuck by the famous “Northwestern stripe” pattern when they got new uniforms in 2017. While you still have teams like the Titans and Jets moving to modern designs, it’s clear that more teams are looking towards the past instead of moving things forward. 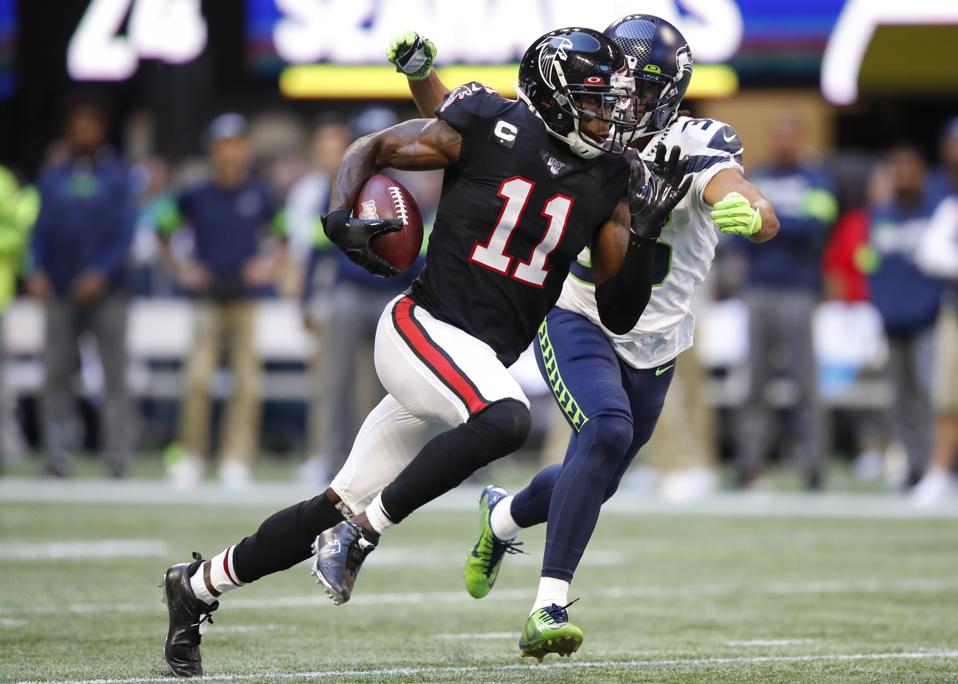 Will the Falcons look back at their old uniforms for new inspiration? (Photo by Todd Kirkland/Getty … [+] Images)

There’s no concrete evidence that a throwback look is on the way for the Falcons but it’s also what the fans appear to be clamoring for. Atlanta has also brought back a throwback uniform as an alternate uniform on two separate occasions during the 2010s. This could be a sign that a return to the past could be on the cards but there’s always the possibility that any team could decide to let Nike have a creative field day and leave it at that and the Falcons may be the next team to do so. It also helps that this was a bit of a surprise so there hasn’t really been any substantial speculation in the past. The Falcons really kept this close to the vest and they may continue to do so until the new uniforms are finally revealed in April.