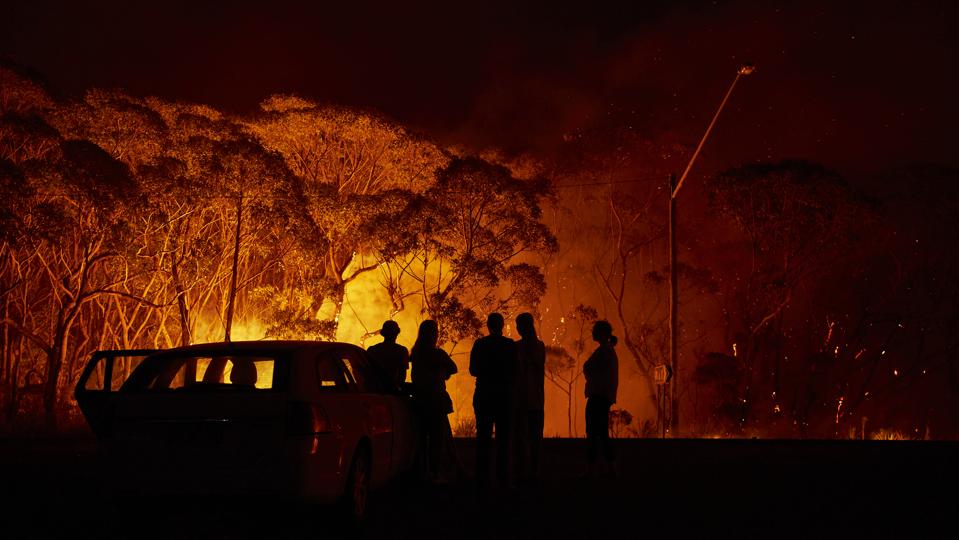 LAKE TABOURIE, AUSTRALIA – JANUARY 04: Residents look on as flames burn through bush on January 04, … [+] 2020 in Lake Tabourie, Australia. A state of emergency has been declared across NSW with dangerous fire conditions forecast for Saturday, as more than 140 bushfires continue to burn. There have been eight confirmed deaths in NSW since Monday 30 December. 1365 homes have been lost, while 3.6 million hectares have been burnt this fire season. (Photo by Brett Hemmings/Getty Images)

Having grown up and lived in Spain’s northwestern region of Galicia, I unfortunately know very well that image of an orange sun almost hidden by thick clouds of smoke, that unmistakable smell of fire, those birds in silence, that fear of not knowing if the fire can be stopped before it reaches the next village… If I relive my memories and then multiply them a hundredfold, the dimension of the catastrophe is beyond comprehension, an apocalypse.

The news about the fires in Australia is just that: unimaginable. While some idiots insist that the situation is part of a phenomenon that is repeated every year, the reality is that the magnitude and gravity of this year’s blazes is unprecedented: 18 people have already died, several dozen more are missing, the conflagration has destroyed an area more than twice the size of Belgium: more than sixty billion square meters, six times the size of the Amazon fires in 2019. More than a thousand homes have been destroyed, hundreds more damaged, thousands of people evacuated, clouds of smoke the size of Europe… and more than a hundred fires are still active. To pretend that something like this is normal is simply proof that you have no idea what you’re talking about.

Fires are a regular event in Australia. Some species of eucalyptus, in fact, depend on fires to release their seeds. But this year is very different: the fire season started much earlier, coinciding with record high temperatures and following a prolonged drought: exactly what scientists predicted when they calculated the effects of a climate change that is now an emergency.

Australia’s current season of fires are what happens when an incompetent government is faced with the effects of climate change. Fires and climate change are linked, and to deny this is simply to ignore the facts. But beyond the scientific facts, what Australia’s entry into the Age of Fire, the Pyrocene, proves conclusively are the consequences of irresponsible policy. The fires in Australia are a chronicle of a suicide foretold. Years of conservative governments funded by the coal industry and with no environmental policies have put the country at the bottom of the list of nations working to combat the climate emergency. And when you ignore emergencies, that’s what happens: you suffer their effects.

Australians back strong environmental policies. But the powerful coal lobby in a country that is the leader in exports of this poisonous product, together with a media panorama led by climate change denier Rupert Murdoch plays down or simply ignores the situation, means no action has been taken: hence what we are seeing now. Scott Morrison, surely a candidate for the worst prime minister in the country’s history (and that’s a low bar) continued his vacation in Hawaii while his country was burning, and since returning home, has tried to play down the catastrophe, saying Australia has been through similar crises, but the evidence is against him, and now requires determined international action: if Australia continues like this, it is not just Australia that has a huge problem: the rest of the world does.

The fires in Australia show what happens when we ignore the scientists’ warnings. What is happening in Australia will eventually happen everywhere there is something to burn. People will die, houses will go up in flames, species will disappear and things will be lost that can never be recovered. Either we believe that this is an emergency and take action, or we are destined to see more fires around the world. We may not want to take emergency measures that will mean some discomfort, that will hit some people harder than others, but that have to be done anyway, because there is no alternative. An emergency entails emergency measures. But so far, I don’t see anyone acting as they this were an emergency.