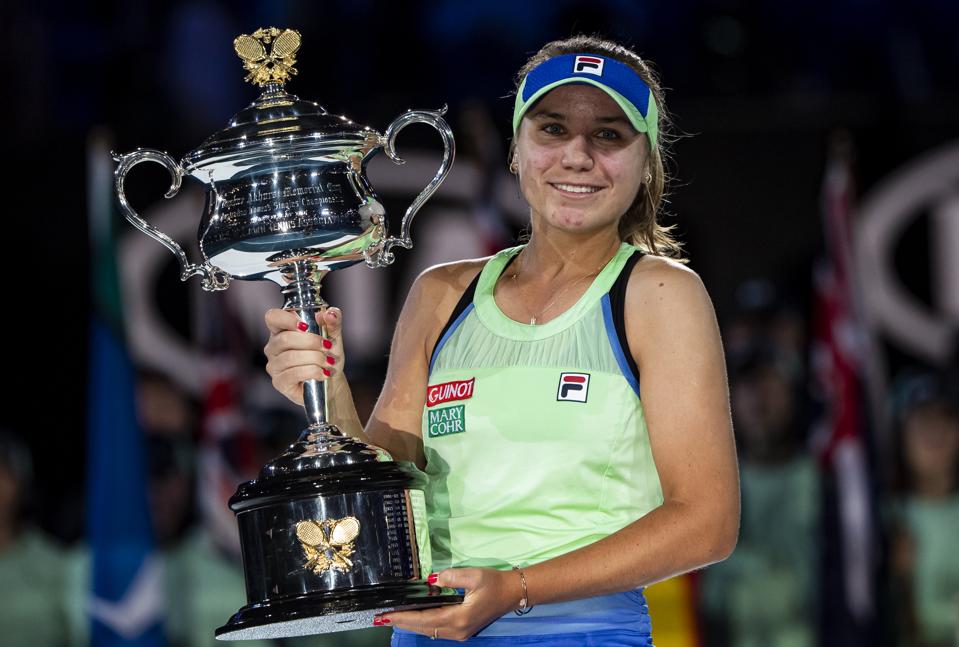 Sofia Kenin celebrates with the trophy after winning the 2020 Australian Open. (Photo by TPN/Getty … [+] Images)

When Sofia “Sonya” Kenin walked through the hallways of the Angel of the Winds Arena in Everett, Washington, during Fed Cup preparations she fielded requests for photos and attention from multiple angles. Fed Cup captain Kathy Rinaldi told her to get used to the attention.

Less than a week removed from capturing her first-ever Grand Slam championship following a three-set, come-from-behind victory against Spain’s Garbine Muguruza, Kenin has sauntered into the tennis limelight. She also passed Fed Cup teammate Serena Williams as the top-ranked American woman, with a No. 7 world ranking.

“It is exciting, but I like it,” Kenin, 21, says during a sit-down interview. “It is really exciting, and I am happy I am doing something right and proved it to a lot of people.”

Kenin, whose dad, Alex Kenin, was nearby, says she is trying to accomplish as much as she can for herself and for her family, especially her dad. “It is an honor to be the (top-ranked) American and it pushes me to reach past my limits, to try to work harder,” she says. 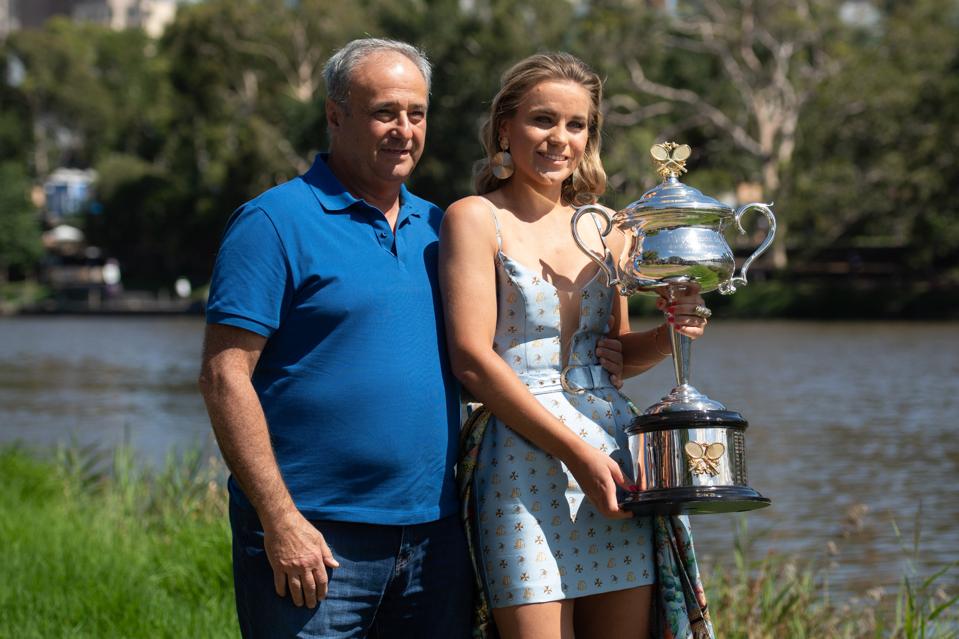 The rush of American women at the top of the game has only grown in the last year. Kenin has reached her career high and Williams is close behind at No. 9. Madison Keys sits at No. 12 while Fed Cup teammate Alison Riske hovers at No. 18, with Amanda Anisimova (29), Sloane Stephens (35), Danielle Collins (50), Coco Gauff (51) and Jennifer Brady (52) all in the mix.

“I follow all the Americans and am super excited (so many are doing well),” Kenin says, “and hopefully we can push each other.”

Making her Australian Open run, which included wins over Gauff and world No. 1 Ash Barty, was part on-court tennis mastery and part focus. “I didn’t want to overthink things because you can start overdoing it and get anxiety,” she says. “I had nerves every match and I tried to handle them the best I could, and I think I did a really good job. I think it was great and hopefully I can continue.” 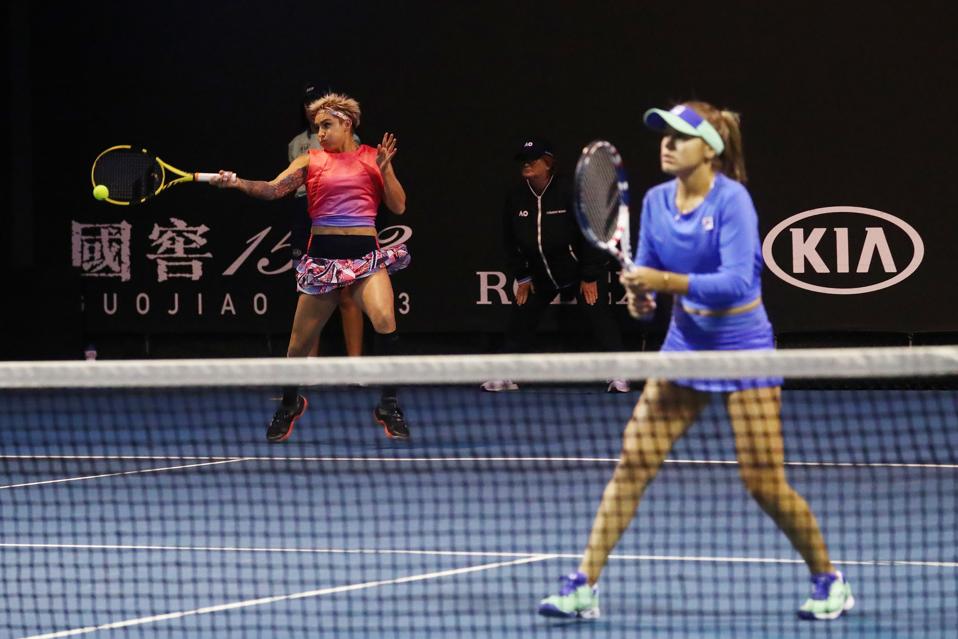 Along with her singles success, Kenin made a run into the third round of the Australian Open doubles draw with new partner Bethanie Mattek-Sands, also a Fed Cup teammate and nine-time Grand Slam doubles champion. The two have enjoyed plenty of laughs off the court — Mattek-Sands has nicknamed Kenin “Peter,” which took Kenin by surprise, but has been the source of plenty of jokes — and will keep playing doubles in Dubai, Indian Wells and Miami.

With Kenin’s stock rising, she says she lets her dad manage the business side of her tennis. “He has more experience,” she says. “I get involved when it comes to style and pretty looks on the court.”

With a Fila sponsorship for apparel and footwear, the young American says she has loved her relationship with the Italian-born brand. And with a wish to one day be a fashion designer, she hopes to get move involved with her on-court looks with the brand. 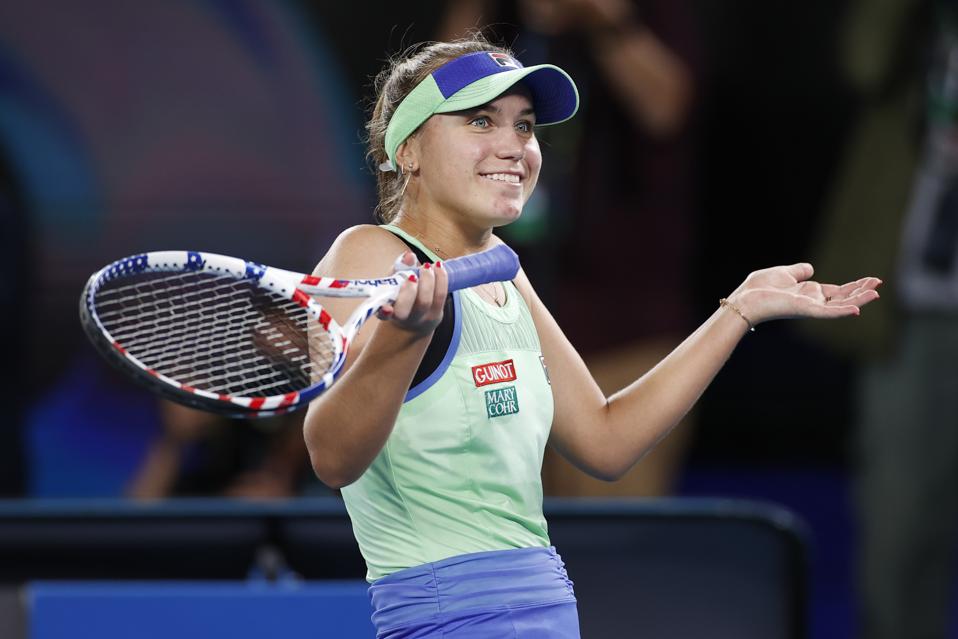 “How it looks is really important,” she says about her on-court kits. “It needs to be the perfect length and everything. Everting they give me is exciting and I would like to eventually see what I could do designing something. I would love to be a fashion designer, so we’ll see how that goes.”

Her agreement with French racket maker Babolat has Kenin using the Pure Drive frame, but she was one of the few professionals to debut the brand-new country-specific paint designs released ahead of the year’s first Grand Slam. Kenin brought out the American-flag designed racket for the Australian Open, will use it during Fed Cup play and plans to continue to swing the new-look frame as the year moves along. “They asked me, and I said, ‘Yeah, it would be an honor to represent my country the whole year,’” Kenin says. “It is super exciting, and everybody is asking about my racket.”

It’s Been 5 Years Since #OscarsSoWhite. Has Anything Really Changed?