Breaking
ESBC Major Updates: Tons Of Heavyweight Greats Added...
5 On-Demand Courses To Help Develop Your Leadership...
How to Run Nonprofit Marketing Ads
Entrepreneurs Are Bringing Transparency To Home Buying And...
Best Incentive To Get Vaccinated: Money, Messaging, Or...
Page Level Query Analysis at Scale with Google...
How A CIO Can Align IT With Business...
Blogger of the Month: Jo, Girl Eats World
6 Things Women In Business Know That Men...
How to Use First-Party Data for Ad Personalization
Pressing Reset—Putting A Fallen Unicorn Back On Its...
How We Went Viral: Promoting Content with Influencers,...
Blame Olympic Record Price Tag For Return To...
Apple iOS 14.5 Release: Should You Upgrade?
How to Come up with Podcast Topics and...
Why Gaming Gear Company Razer Launched A $50...
Home Technology Australian ‘Rocket League’ Players Banned For Intentionally Losing A Series
Technology

Rocket League Esports is growing quickly, but it isn’t without some growing pains. As a result of one of the game’s first major scandals at the professional level, Australian players delusioN and Frenzyy, formerly of Team Esper, have been banned from all events sponsored by Psyonix or Lets Play.Live (LPL) until April 2021.

As per the official statement from Psyonix and LPL, the organisation that runs the Oceanic region of the Rocket League Championship Series, the two players have been banned for “deliberately compromising competitive integrity” after reviewing game footage and chat logs from the players. The pair’s former teammate, SSteve, is not banned as he was apparently not involved with the plot.

The incident occurred in the last week of Oceanic league play as Team Esper and FURY began the game that would decide their match. After a very close series, Team Esper started game five by intentionally missing the kick-off and gifting FURY a goal just seconds into the game.

Through the rest of the match, delusioN and Frenzyy can be seen dribbling the ball towards their own net, whiffing easy saves, scoring goals on themselves, and even sitting motionless during the match. The bewildered commentators quickly caught on and chided Team Esper as the match reached 5-0 in favor of their opponents. 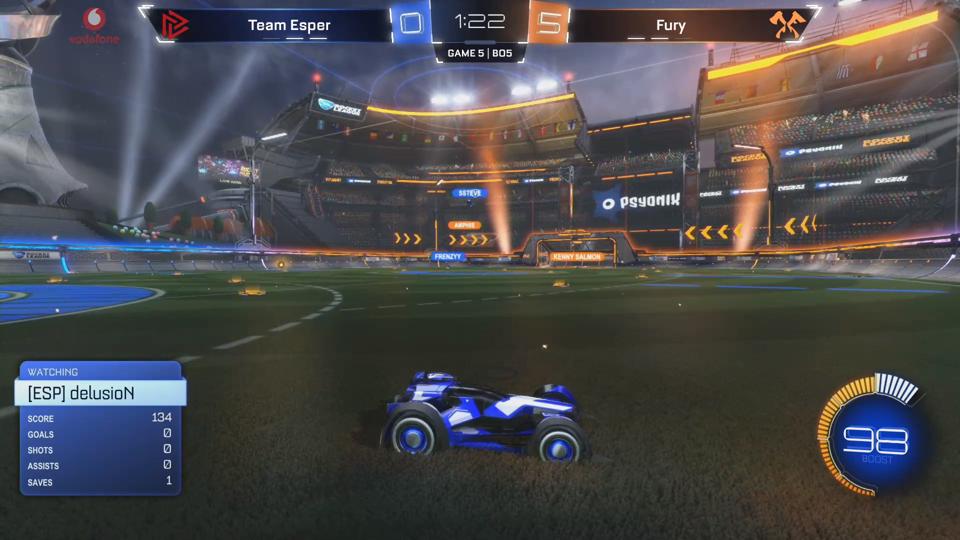 The motivation behind this thrown match are unknown, but many suspect it was to keep rival team Renegades out of the top four, and thus out of the Oceanic Regional Tournament. Because the main tie-breaker after a team’s season record is games won, Team Esper needed to win their series 3-0 or 3-1. After dropping game four to Fury, it was impossible for the team to make top four in League Play.

Without the vital games-won tiebreaker advantage, Esper would place fifth in the league after rival team Renegades even if they won the series. By throwing the game, however, FURY’s record improved to 5-2, pushing fourth place out of reach of Renegades.

The commentators even mentioned this as a possible motive for their suspiciously poor performance during the match, and the circumstances certainly pushed LPL and Psyonix to investigate the possibility of an intentional loss. Team Esper released all three players from their roster after the match, though the organization is known to shuffle their roster after every season regardless.

To watch the game for yourself, check out the event broadcast here, starting at 3 hours and 10 minutes.

It’s truly unfortunate to see this lack of competitive integrity from these players, especially in a region that so many players fight tooth-and-nail to have taken seriously by the rest of the Rocket League world. Psyonix and LPL have made an example of this incident with a strong one-year ban, and I don’t suspect we’ll see a similar occurrence again soon.