Austria Pledges To Fit 1 Million Roofs With Solar By 2030 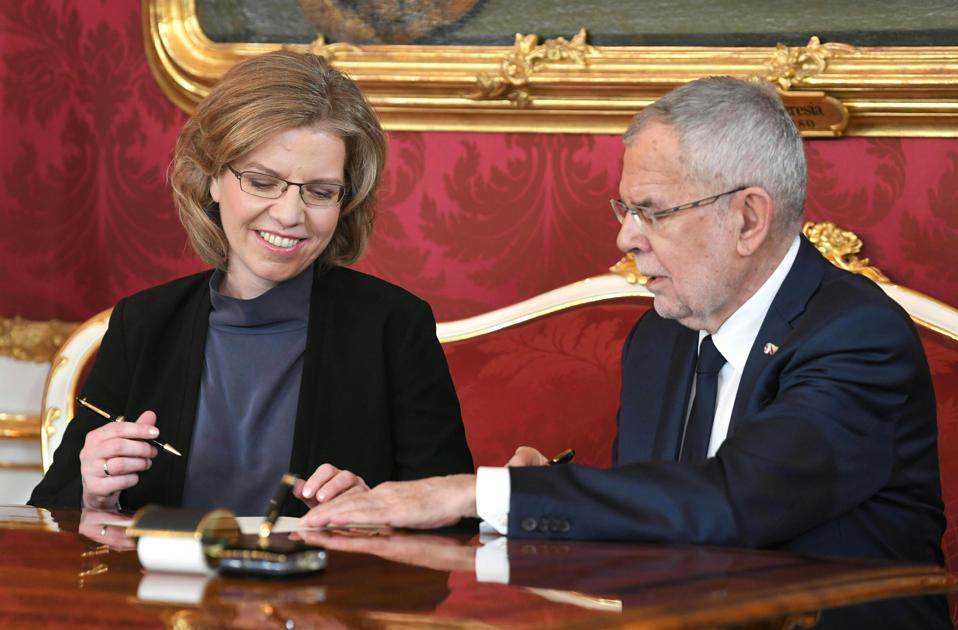 Austria’s President Alexander van der Bellen (R) looks on as Austria’s newly appointed environment, … [+] energy and infrastructure Minister Green Party’s Leonore Gewessler signs a document during a swearing-in ceremony of their new coalition government on January 7, 2020 at the President’s office in Vienna, Austria. – Austria’s conservative Sebastian Kurz will return to office as the world’s youngest democratically elected leader heading an unlikely coalition with the Greens after his previous far-right alliance collapsed. Kurz’s People’s Party (OeVP) and the Greens agreed to govern together after the last administration with the far-right fell apart in a corruption scandal, and both the OeVP and the ecologist party made key gains in September 2019 snap polls. (Photo by ROLAND SCHLAGER / APA / AFP) / Austria OUT (Photo by ROLAND SCHLAGER/APA/AFP via Getty Images)

Austria’s new government has promised a 1 million photovoltaic roofing program as part of its plan to achieve climate neutrality by 2040. The country pledged to source all its electricity supply from renewable sources by 2030.

The new Austrian federal government, formed by the conservative Austrian People’s Party (ÖVP) in coalition with the ecologist Green Party and led by ÖVP’s Sebastian Kurz, has appointed a new ‘super ministry’ for climate and environmental protection as well as energy and infrastructure.

The roof programme for solar electricity is already fixed in the Governmental Agreement between the Green Party and ÖVP for 2020 to 2024.

“Photovoltaics in general and the 1 million roof programme in particular will add substantially to these goals in a world where mobility is to be switched to electric driving and also fossil heating systems have to be replaced speedily during the next decades,” the new climate protection minister, Leonore Gewessler from the Greens, told Forbes.com.

“The two political parties have the necessary majority in the National Council as the first and decisive chamber of Parliament. And, as today’s inaugural discussions in Parliament have shown, this project has also political support by Neos (Liberal Party) and SPÖ (Social Democrats), so there should be a comfortable majority in favour of the necessary legal and financial decisions.”

Properties of any kind will be involved and a funding for photovoltaics on other buildings, such as car parking, will soon be added.

Gewessler added that, in the new Governmental Agreement, it has been possible to fix a 27 TWh additional energy production capacity from renewables until 2030. Out of these, 11 TWh are supposed to come from photovoltaics along a steady yearly path.

The decision is in line with the Solar4Buildings campaign, calling for solar to be installed on all new and renovated residential, commercial and industrial buildings in the EU. According to the association SolarPower Europe, more than 90% of European rooftops are currently unused. By fitting this space with solar, up to 7 million tonnes of CO2 can be saved each year and at least 680 TWh of renewable electricity produced.

Solar industry’s specialized media pv magazine Deutschland claims that the 1 million roof programme won’t be sufficient to meet the increasing demand for electricity and that important points, like the solar obligation, are still missing.

The Federal Association of Photovoltaic Austria (PVA), whose primary goal is to bring photovoltaics and electricity storage to market maturity, assumes that more power will be necessary. The managing director Vera Immitzer told pv magazine Deutschland that “even if the 1 million photovoltaic roof program represents a gratifying and substantial increase in the originally planned 100,000 roof program, it will still only be able to contribute about half to the actually required photovoltaic expansion”.

At the moment only 1.4 TWh are provided from renewable sources, covering 2.5% of Austrian energy demand. Greenpeace Austria believes that the government’s move will demand massive investments into solar power. “To stop the climate breakdown we must phase out fossil fuels and rebuild our economy solely on the basis of renewable energy,” Jasmin Duregger, Climate and Energy campaigner at Greenpeace CEE in Austria, told Forbes.com.

“The new goal is ambitious and presents challenges. First and foremost it requires solid and extended renewable energy legislation that provides the funding required, enough land space and rooftops to build the panels, as well as the support of house owners.”

“Energy demand is still rising. Only an effective energy-efficiency law can guarantee that we not only cover rising energy demand with solar power, but also replace and phase out fossil fuels.”

Could There Be Life On The First Earth-Sized, Habitable Zone Planet Found By NASA’s TESS?

Consumerization of Healthcare Expands Beyond Lifestyle Products to...

A Note And Update About COVID-19 For Restaurant...

How To Enhance The Customer Experience Using AI...

Data Centers Are Not The Energy Hogs We...