Breaking
Everything You Need to Know About Corporate Social...
Is Adaptive Leadership the Key to Motivating Employees?
Why business events are set to return with...
Business events set to return with a bang!
Expanding Internationally: 5 Things to Consider for eCommerce...
How the Machine Shop Is Going Digital in...
Sustainable Food Packaging Is Helping the Hospitality Sector...
Top 5 Investment Practices To Make More Money...
Managing IT Requirements for SMEs: 5 Aspects that...
How To Build a Successful Luxury Brand In...
Finding The Best Google AdWords Consultant for Your...
8 Top Tips To Help Your Agricultural Business...
Three Reasons Why Office Décor and Design Are...
Looking To Improve Efficiency In Your Business? Here’s...
AI and machine learning for business
How Social Media Changed the World
Home Business Austrian Airlines Business Class: Where Style, Good Food And Fine Wine Rule The Skies
Business 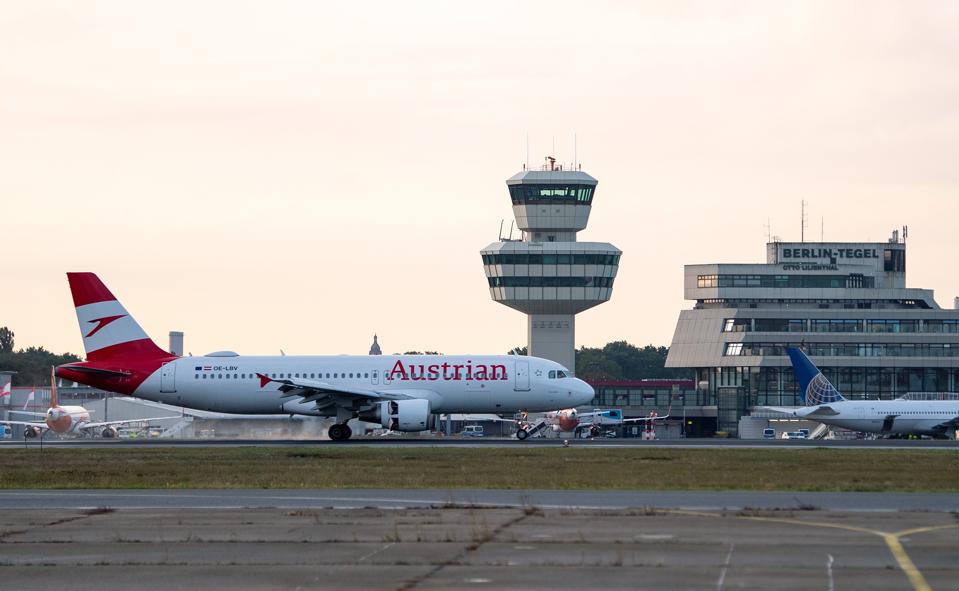 For a recent flight between NYC and Morocco, I booked business class on Star Alliance carrier Austrian Airlines using miles on United’s platform. This review is for the leg between JFK and Vienna on OS 88, an 8 hour, 15 minute flight.

Bed relatively hard and confining, particularly at the feet. No real sense of privacy through dividers or adjustable screens, a feature more common amongst Asian and Middle Eastern carriers.

Austrian Airline’s product reflects its country of origin. It’s clean, efficient, well-run with a touch of style. The dining experience was fun though long and left passengers with little time to rest on an overnight flight to Europe. Nonetheless, I’d definitely recommend this carrier for those headed on their first trip to Austria, though any trip abroad would benefit from Austrian’s business class service. 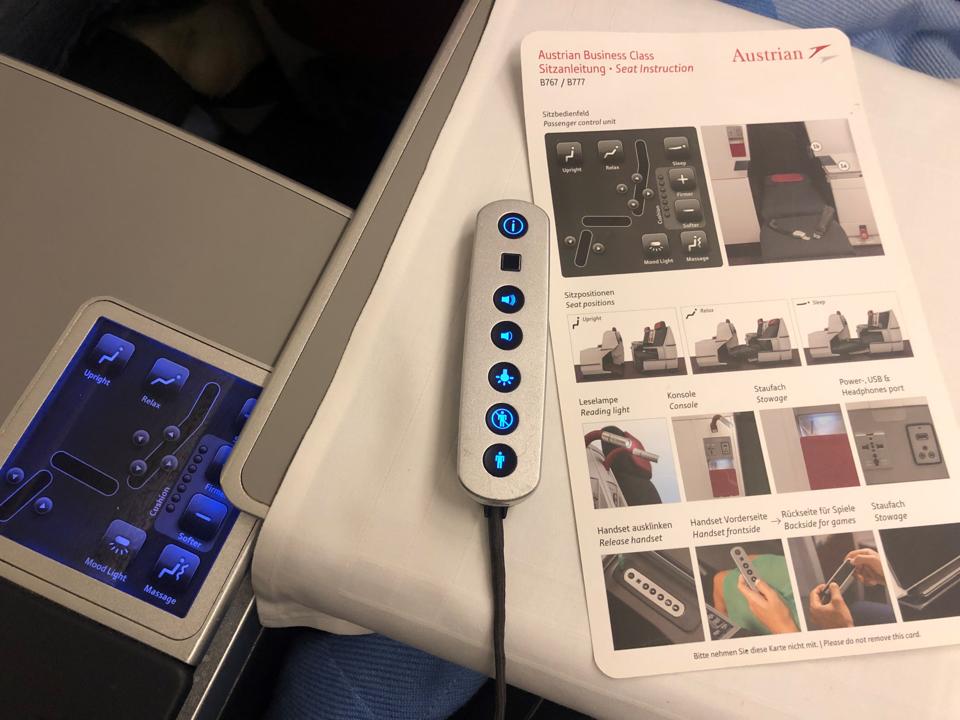 I used 70,000 Star Alliance frequent flier miles, earned through United Airlines flights, and booked through United’s website, for my one way leg to Marrakech via Vienna. I scored seats before United debuted its dynamic pricing scheme for mileage booking. My miles were far more valuable on Austrian than on UA metal, which I have found to be the case for several years now.

Flying business class on Austrian included access to the Lufthansa business class lounge in JFK. Star Alliance Gold (and above) members also have access. The lounge is among the more impressive among the three NYC airports. A wall of double-height windows line one side of the lounge with view of a plane parking tarmac. The light is plentiful and the best feature of the lounge. A well-stocked bar, though slim on decent wine, was positioned on one side of the long rectangular room. The buffet is arrayed on the other side of the windows, lining the interior wall. On the opposite end of the room from the bar, cushioned leather arm chairs are arranged tightly in rows. There are power outlets conveniently available near the cushioned chair seating section. The food was middling (and gave my husband food poisoning by the end of our flight). So, save room for business class fare, one of Austrian’s strong suits. 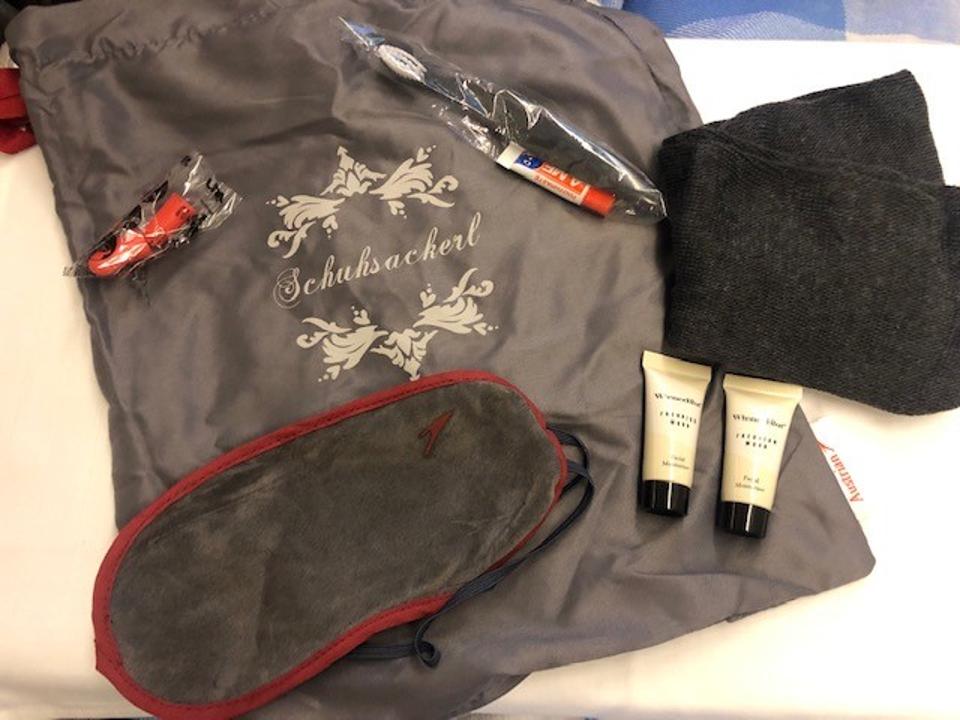 The cabin configuration from JFK to VIE varied by alternating rows of 1-2-1 and 2-2-2. This pattern distinctively benefits those in the more common 1-2-1 set up as this does not require those seated by the windows to climb over seat mates. I tested this acrobatic maneuver several times and it almost requires that passenger being hurdled be a family member and/or a light sleeper. Overhead space, as usual for business class, was more than plentiful, and easy to access.

The seat functioned well and moved smoothly between various recline positions into a complete flatbed. However, depending on the seat, the width of the bed may feel narrow. My arm extended over the side to rest on cold metal. Also, the angled and narrow foot space felt cramped and I’m only 5’3”. I can only imagine a basketball player forced into a fetal tuck on his or her side.

The amenity kit included basic items like hand cream, face moisturizer, and lip balm in a sack I’ve repurposed as a shoe bag for travel. The notably sturdy eye mask designed to match the bag, has become my go-to mask for all flights. It’s soft and textured like moleskin.

The Dreamliner featured crisp, new 16″ touch-and-swipe screens with remotes for watching the latest films and tv shows or listening to music. Noise-cancelling headphones did the job though weren’t gold standard. Movies were a mix of classics and new releases though frustratingly heavy on cartoons and superhero films. Nonetheless, it was a pleasure to watch anything on the bright screen.

Before dinner service, guests receive a menu from a staff member in a chef’s outfit listing breakfast options. This isn’t just a rote exercise of cereal, muffins versus powdered eggs. Rather, the menu has an extensive selection including fresh fruit smoothies, homemade granola, a California-style omelet, or eggs sunny-side-up. 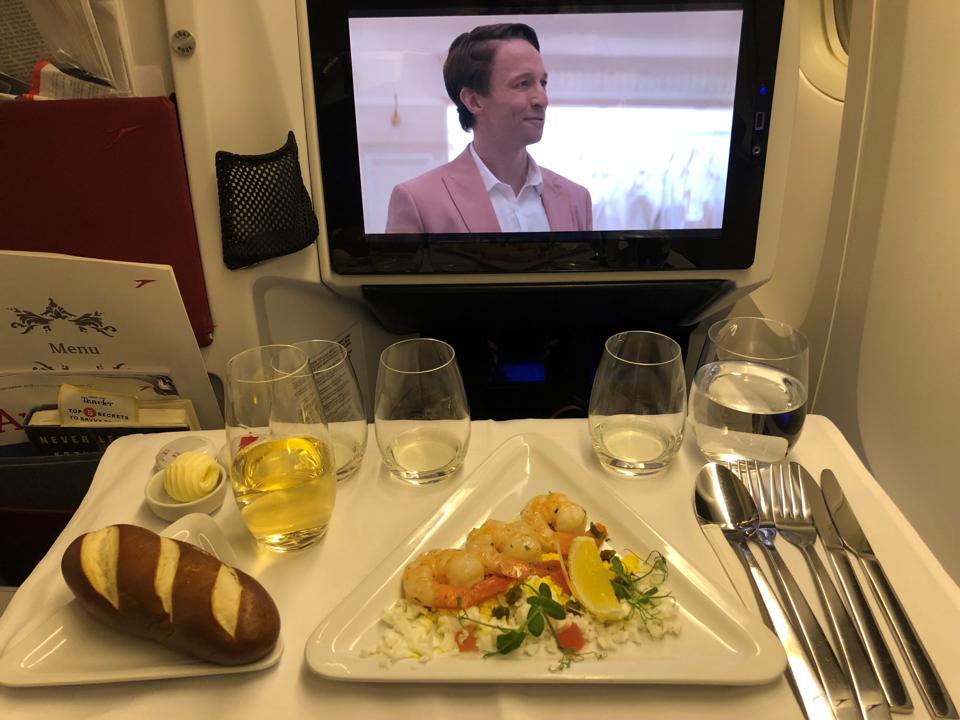 The wine list was a delight to peruse and is presented as a menu. Someone actually bothered to explain the grape, origin, production process and story of the family producers. The list offered a mix of old world wines, though heavy on Austria, naturally. Of course, the welcome pour should always be sparkling wine, and Austrian poured the estimable Champagne Duval-Leroy. This wine shows particularly well at attitude, brimming of yeasty brioche, spice, and crisp, bright citrus notes. 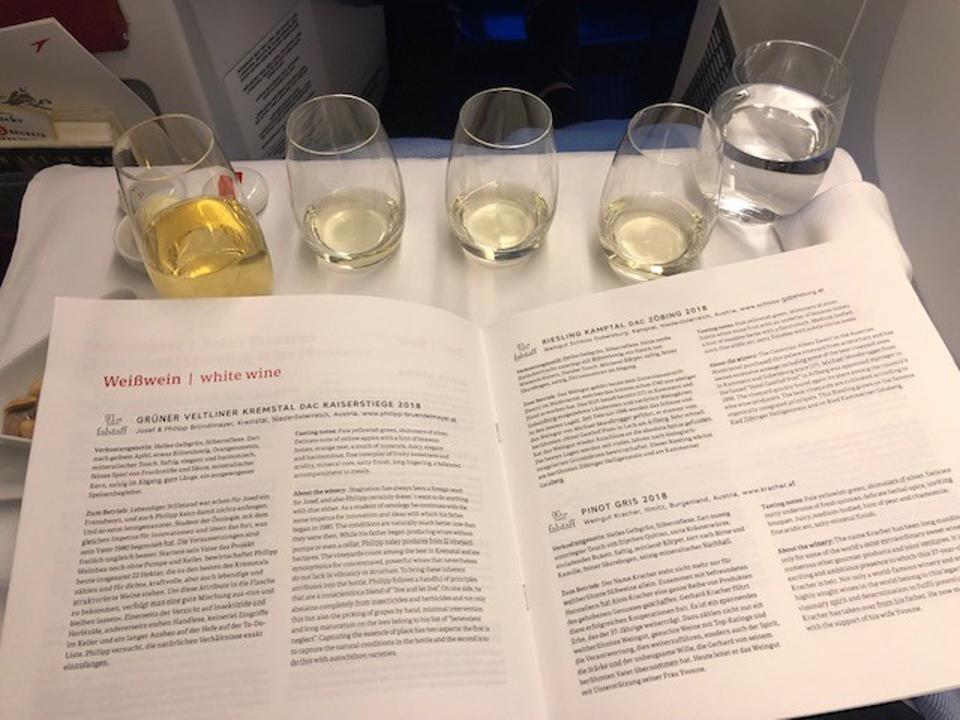 White wines from Austria included a Brundlymayer Gruner Veltliner from noted appellation Kremstal, a Schloss Gobelsburg Riesling from Kamptal, and a Kracher Pinot Gris from Burgenland.  The rose was from Austrian producer Schlumberger. Several Austrians reds rounded out the rest.  Three Austrian beers, and one nonalcoholic offering, plus a specialty cocktail, were also offered.

Dinner service started with an array of appetizers, from tasty prawns Andaluz, goat cheese salad and/or celeriac cream soup served from an elegant ceramic tureen.  Entrees included a choice between meat, fish and vegetarian. Tandoori chicken was surprisingly good as was the seared fillet of salmon which came out perfectly cooked. Not dry and chalky, typical of most inflight salmon experiences. I took small bites of the desserts. A gently sweet almond cherry cake drizzled in vanilla sauce was my favorite, though the profiterole in chocolate sauce was a strong competitor.

My only complaint about dinner service was that it was slow. Take-off to completing dessert was almost three hours. Given the flight is only 8 and breakfast is served 1.5 hours before landing, that’s barely any time to rest on an overnight flight to Europe. Indeed, I had little sleep and wasn’t rested upon arrival. 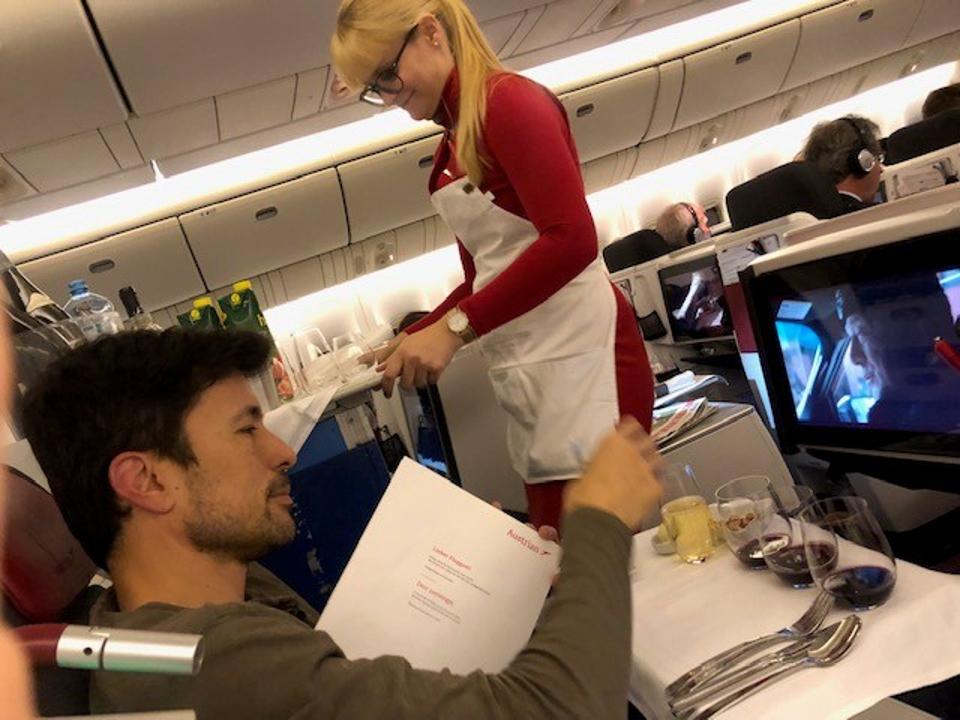 There aren’t many airlines, especially as a US-based traveler, that excel in the service department. I feel lucky if I’m not sniped at or manage to get an FA’s attention for a water refill without pissing her/him off. Well, this is not an American carrier, evident from the friendly greeting the minute you step on. During dinner, our FA graciously poured flights of white and red wines so we could compare and contrast. She made two quick coffees just before landing as I slept through breakfast. Service was seamless, friendly and accommodating, as it should be.

Is Russia Hinting OPEC+ Discipline Could Crack In 2020?