Breaking
Renewables And Energy Storage Are Surging In Red...
Bitcoin’s Richest Are Selling, So Why Is The...
Apple’s iPhone 12 Will Cause Serious Problems For...
Rock Royalties – How A European Startup Is...
4 Differences Between Creative and Marketing Agencies
A Meeting Is A Gathering: The Most Common...
IRS Tax Extension To Jan. 15 For California...
Senate GOP Pushes Through Democratic Filibuster To Advance...
How These Successful Entrepreneurs Learned To Adapt And...
Six Ways Tax Rates Go Up For Retirees
How ‘Mario Kart Live: Home Circuit’ Straddles The...
6 Tools To Bring Your Virtual Conferences To...
COVID-19 And The Future Of Aging: Prospects For...
Harman’s New Citation MutiBeam 700 Is A Feature-Packed...
A Startup Raises $11 Million Using Zoom, A...
Is Your Business Stagnant? It Might Be Time...
Home Business Automakers Dial Back On Deals; Sales Recovery Loses Steam In May
Business

Automakers Dial Back On Deals; Sales Recovery Loses Steam In May

It’s probably too late to take advantage of recent generous incentives like zero-percent financing for 84 months, but there are still good offers around, as the U.S. auto industry struggles to get back on its feet, analysts said.

“Many markets are opening up, many cities are returning to normal life,” said Tyson Jominy, vice president of data and analytics at J.D. Power. 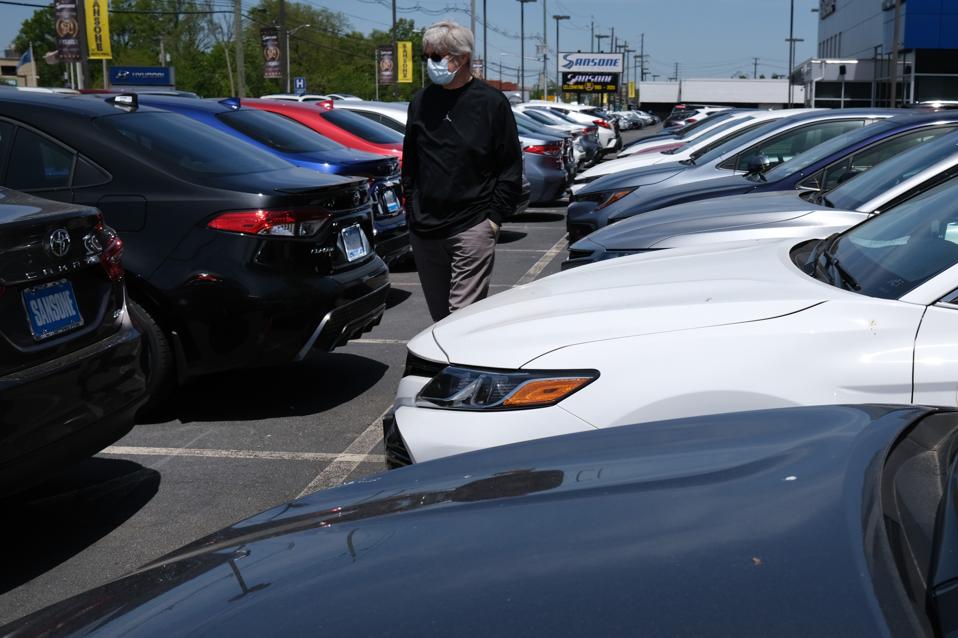 A shopper wears a mask at a dealership lot in New Jersey, after months of a lockdown due to the … [+] coronavirus.

U.S. auto sales tanked in late March and April, after many states imposed stay-at-home restrictions. Auto sales have started to recover as restrictions are gradually lifted, but in May the recovery seemed to level off, Jominy said in a webinar May 28.

“The recovery is officially going sideways the last three weeks,” he said. For the three weeks ending May 24, Jominy said retail U.S. auto sales, not counting fleet sales, stayed around 25% below pre-virus forecasts. Sales bottomed out in late March, down about 60%, J.D. Power said.

For the month of May, J.D. Power said it expects retail sales of just under 1 million units, down about 24% from forecast. Sales over the long Memorial Day weekend were disappointing, Jominy said. “We wanted more than we got,” he said.

Meanwhile, automakers have dialed back on the best deals, in part because they’re liable to run short of inventory until they can get production going again.

In previous recessions, auto plants initially kept running “full speed ahead,” Eric Lyman, chief industry analyst for TrueCar’s ALG, said in a phone interview May 27. That resulted in an oversupply of new cars and trucks, which in turn prompted automakers to pull out all the stops on incentives.

But in the COVID-19 pandemic, supply and demand both crashed at the same time, so the car companies aren’t saddled with too much inventory, Lyman said. Going forward, he said automakers would likely pick and choose more carefully which models get incentives, rather than take the typical “shotgun” approach of applying incentives nearly across the board, he said.

That means consumers will need to search harder for deals, but deals are still available. ALG expects total U.S. auto sales in May, including fleet sales, to be just over 1 million, down 32% from a year ago.

Is The News Trying To Scare Or Shame Small Business Owners?