Since the full moon was last week and that bright orb is therefore rising later each day as a waning gibbous moon, the early evening is perfect for stargazing. However, the moon’s late rising means it’s late to set, too, so it’s visible above the eastern horizon before sunrise. Since that’s currently the “realm of the planets,” there will be some great sights to be had for early-risers. 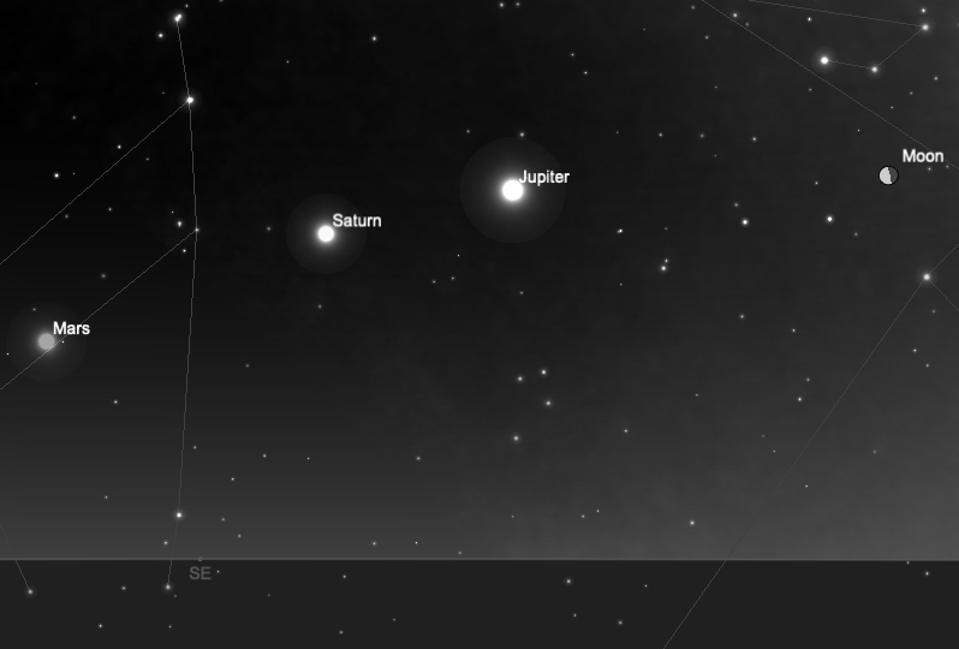 The moon and planets on Tuesday morning.

Look east-southeast before sunrise today and you’ll see a waning gibbous moon form a line of four with Jupiter, Saturn and Mars in front of the constellations of Capricorn (the goat) and Sagittarius (the archer). 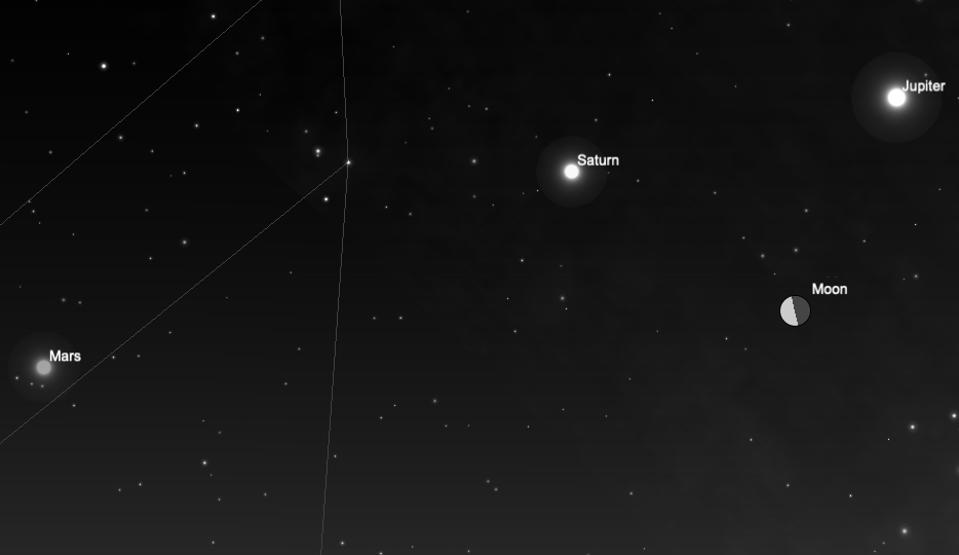 Wednesday before dawn: the moon between Saturn and Jupiter.

Wednesday, April 15, 2020: the moon between Saturn and Jupiter

Look east-southeast before sunrise today and again you’ll see the waning gibbous moon join the planets, though this time the moon will form a triangle with Saturn and Jupiter. It happens at 03:30 Universal Time. 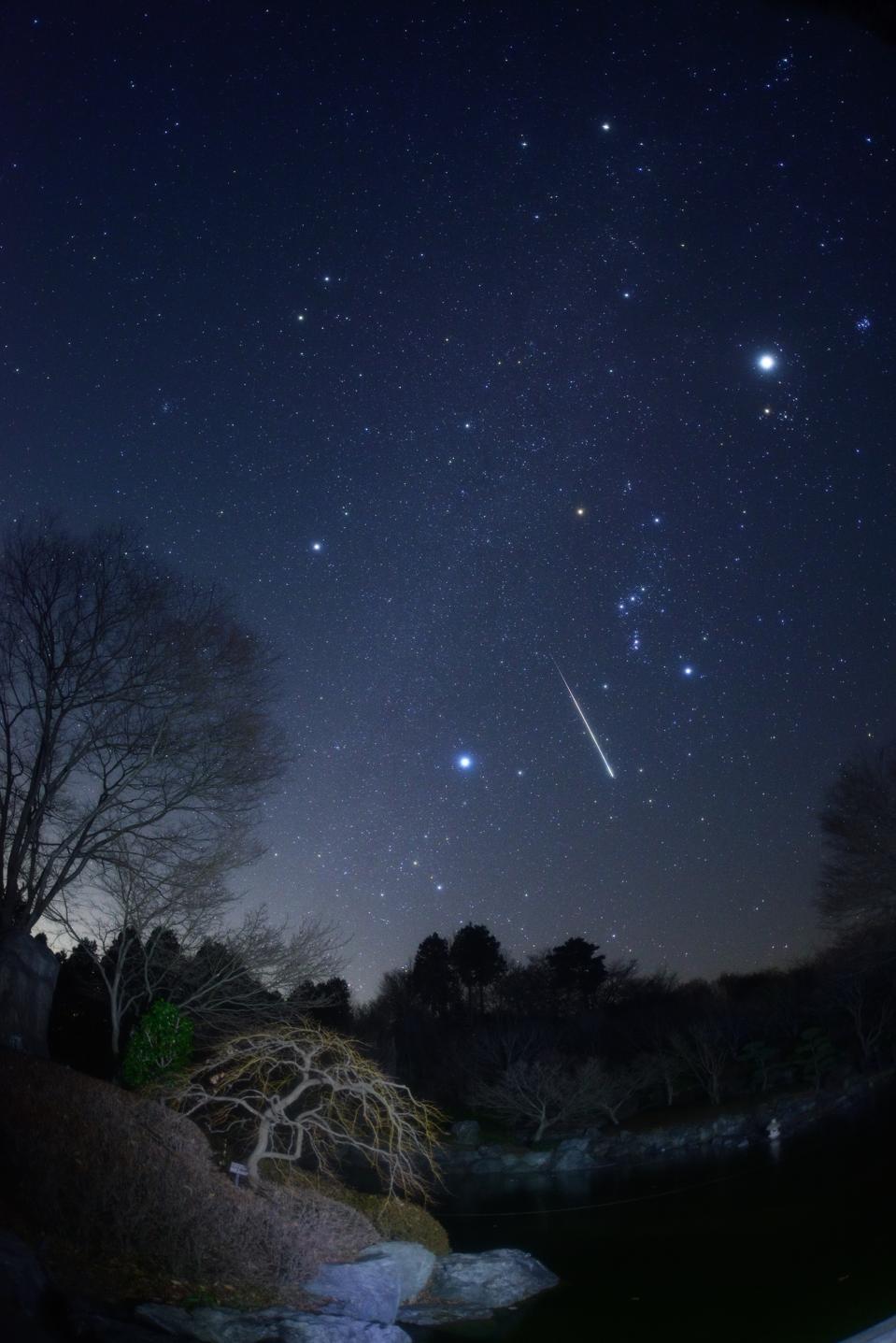 This is nothing to get excited about since you can only expect to see around five “shooting stars” per hour during the Alpha Virginids, though if you’re stargazing in moonless skies you’ve got a better chance than normal of witness a bright flash in the night sky. Meteors will appear to originate from Spica, the brightest (alpha) star in Virgo, hence the name. The source is 1998 SH2—an asteroid, not a comet, which is unusual (the Geminid meteor shower in December is another that’s caused by an asteroid).

Object of the week: Comet Atlas

Now in the northern constellation of Camelopardalis (the giraffe), Comet Atlas (C/2019 Y4) remains a tenuous sight. By using this map from the British Astronomical Association and a pair of binoculars you should be able to see it in a reasonably dark sky, though it should/could/might get brighter as it nears the sun, probably peaking in brightness in mid-May. However, hopes that this will become the long-awaited “comet of the century” are on the waning with a report suggesting that Comet Atlas may be disintegrating.

Constellation of the week: the Big Dipper

The famous winter constellations Taurus, Orion and Canis Major are sinking in the west this week, closely followed by Gemini. However, look directly above and you’ll see the Big Dipper/the Plough.From the northern hemisphere this asterism is almost always present in the night sky, which is why it’s so well-known. The familiar shape of seven bright stars is part of the circumpolar constellation of  Ursa Major (the great bear), which means that it moves around true north once every 24 hours. An easy way to remember where the Big Dipper will be during the year is the phrase “spring up, fall down.” 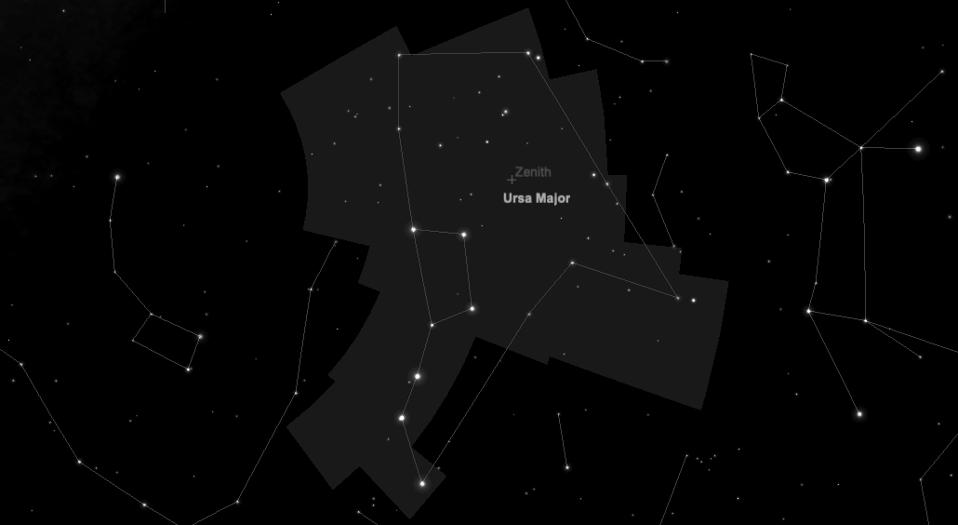 The Big Dipper/Plough is at the zenith this month after dark.

The Big Dipper is the nearest star cluster to us and it’s gradually moving across the night sky in the direction of the constellation of Sagittarius. However, two of the Big Dipper’s stars—Alkaid at the tip of the tale, and Dubhe at the top of the bowl—are not in the cluster. So in 100,000 years the famous shape will be distorted.

New York Has 1,300 Reasons Not To Close Indian Point

Most College Students Won’t Get A Stimulus Check

Could We Achieve Interstellar Travel Using Only Known...

These Kids Are Solving The World’s Problems With...