Home Finance Bankruptcy Or Bailout? McConnell And Pritzker Give Their Answers For Illinois’ Pensions
Finance

Bankruptcy Or Bailout? McConnell And Pritzker Give Their Answers For Illinois’ Pensions 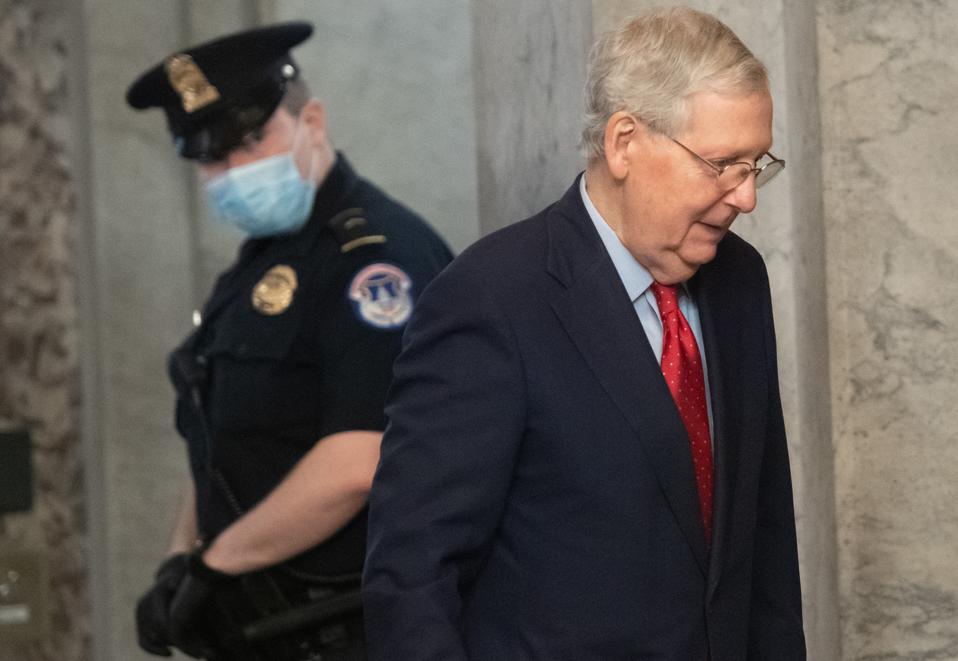 US Senate Majority Leader Mitch McConnell arrives for a pro forma session where the Senate planned … [+] to vote on a nearly $500 billion package to further aid small businesses due to COVID-19, known as the coronavirus, at the US Capitol in Washington, DC, April 21, 2020. (Photo by SAUL LOEB / AFP) (Photo by SAUL LOEB/AFP via Getty Images)

Last week, Illinois, via its Senate President Don Harmon, called for a pension bailout, or, more specifically, asked its Congressional Delegation to secure $10 billion in federal funding for its state pension plans and nearly as much for municipalities.

Not only did McConnell reject a “blank check” for state and local governments, but, when prompted, he specifically addressed pension debt:

“You know, we’ll certainly insist that anything we’d borrow to send down to the states is not spent on solving problems that they created for themselves over the years with their pension programs.”

Then, later in the interview, Hewitt asked:

First, McConnell said he wanted to “push the pause button” and added,

“There’s not going to be any desire on the Republican side to bail out state pensions by borrowing money from future generations,” differentiating this sort of funding from money directed to small businesses compelled by the government to close, or to hospitals.

Hewitt then again references the longstanding governance failures in California, Illinois, and Connecticut, and asks whether a bankruptcy code chapter should be “invented” for states “so they can discharge some of these liabilities that were put in place by previous governors.”

“Yeah, I would certainly be in favor of allowing states to use the bankruptcy route. It saves some cities. And there’s no good reason for it not to be available. My guess is their first choice would be for the federal government to borrow money from future generations to send it down to them now so they don’t have to do that. That’s not something I’m going to be in favor of.”

Now, I’ve quoted this at greater length than the snippets floating the news reports because I want to parse this carefully.

Consider, after all, the state of Illinois, and the ways in which it’s impacted by the coronavirus. Its own forecast for revenue losses is for a drop of $2.2 billion for FY 2020 (ending on June 30), out of an original total of $36.9 billion, and a drop of $4.625 billion in FY 2021, out of an original projection of $38.5 billion, with losses coming from income tax drops, sales tax drops, a drop in lottery proceeds, casino gaming, and so forth. How much additional money the state has already spent, relative to what was budgeted, and how much that will sum to in the future, hasn’t been reported yet. Will the state run into issues, not merely with debt, but with solvency — the ability to make payroll? The state already has a bill backlog of $7.8 billion, and that’s a longstanding failing of the state, long preceding the coronavirus.

And if Illinois, or another state, simply can’t make payroll, would the federal government cover those costs? Would states be obliged to borrow — which is already a part of Illinois’s plan, that is, borrowing $1.2 billion in FY 2020 and paying it off with as-yet-unknown funds in 2021? Is Illinois, and are the 49 other states, simply counting on federal funds to avoid borrowing, or pay off these debts?

But that’s only part of the story.

If pensions were adequately funded, new pension accruals each year, or the “normal cost,” would be, essentially, simply a component of payroll, much the same as paying health insurance premiums. But in Illinois, it has long been a part of the state’s response to economic crises to abandon its pension contributions, to which a full quarter of the state’s general revenue is directed. McConnell has rejected a “pension bailout” – but deferred the question of aid to states and localities more generally speaking.

And what about Pritzker?

The Chicago Tribune, earlier today, reported that, during the governor’s daily coronavirus briefing, Gov. J.B. Pritzker rejected the notion of reducing pension debt through bankruptcy. But he has not committed to making the state’s scheduled contributions (and his press office did not respond to my queries on the matter). If Pritzker abandons funding pensions in order to make payroll, but continues to reject any sort of pension reform, and simply defers funding targets to even further in the future, what are the consequences of this decision down the line? Does he expect that a part of the “new normal” will simply be de facto pay-as-you-go pensions, at the state level, and truly emptied-out pension funds in Chicago?

To be fair, there are many unknowns at this point in time, and it’s likely that Pritzker would abandon this year’s pension contribution without intending for it to set a precedent for future years. But, of course, we have no idea for how many years the economy will struggle even after the immediate crisis is over, and it was exactly the intention to fund pensions “later,” for years and years of “later,” that caused our current funding crisis.

Oil Futures In Record Contango Of Over $10...

Gold’s Big Rally Is A Heads-Up For Rotation,...