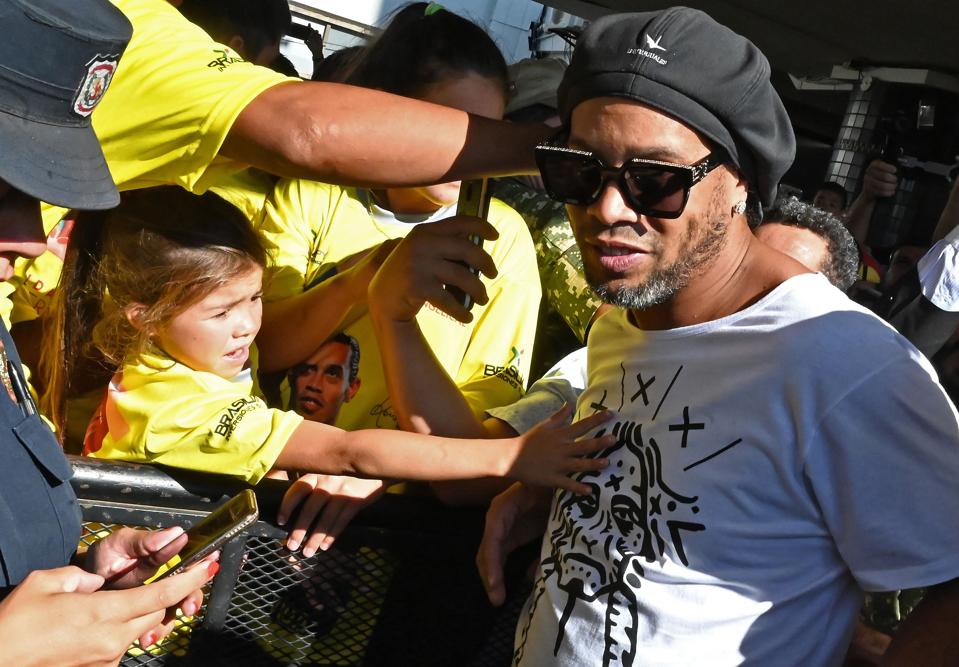 TOPSHOT – A girl stretches to touch Brazilian ex-football star Ronaldinho Gaucho upon his arrival at … [+] Silvio Pettirossi International Airport in Luque, near Asuncion, on March 4, 2020. – Ronaldinho arrived in Paraguay to present his latest book “Genio en la Vida” and a health programme for girls and boys. (Photo by Norberto DUARTE / AFP) (Photo by NORBERTO DUARTE/AFP via Getty Images)

FC Barcelona legend Ronaldinho and his brother Roberto have been refused an appeal to transfer from the Paraguayan maximum security prison in which they have been held captive since the weekend to house arrest.

On Tuesday morning, journalist Martin Fernandez, who is on location in the capital Asuncion for Brazilian media giant Globoesporte, announced that a court hearing would begin shortly at 8AM local time with sources revealing “that the tendency is for him to be granted house arrest at the home of a friend of his Paraguayan lawyers”, though nothing was guaranteed.

A couple of hours later however, Fernandez further reported that there would be a decision at 10.15 local time whether or not to accept a request from the defence to transfer Ronaldinho and Roberto to house arrest with a property valued at $800,000 offered as collateral, to which the Paraguayan Public Ministry were apparently opposed.

Their appeal was subsquently turned down, with the brothers scheduled to stay behind bars until they face trial on charges of using false documents.

As widely explained, the former Ballon d’Or winner and his sibling arrived in Asuncion on Wednesday morning for Ronaldinho to participate in an NGO event and launch his book Genius of Life.

Invited to stay at businessman Nelson Belotti’s hotel and casino, their passports had caught the attention of local authorities, who approached them at the accommodation on Thursday night then held the pair under close watch until they could testify the following morning.

Ronaldinho asked to pose for selfies and photographs with local police, the brothers spent Friday night in the cells before being whisked off to court on Saturday in handcuffs.

There, at a hearing which lasted more than four hours, it was decided that the suspects would be kept in pretrial detention due to posing a flight risk alongside the fact that Brazil does not extradite its citizens.

The first images of Ronaldinho in prison have since emerged, alongside wild rumours it planned to hold a futsal tournament and more believable claims that he could spend up to six months behind bars before having his fate decided.

To Reuters, prison warden Blas Vera said in a telephone interview on Monday that, “In broad terms”, Ronaldinho was “doing very well” in custody. “I see he is in good spirits, just like you see him on television, always smiling,” it was added.

As relayed on Sunday however by Fernandez and his colleague Raphael Sibilla, lead prosecutor Osmar Legal has attested that the World Cup and Champions League winner is being investigated for “other crimes” in Paraguay.

“We are not yet able to say [anything] about the steps of the investigations, but there are indications that other crimes have been committed,” Legal said.

“They are being prosecuted for using false documents. The [false] passport they used to enter Paraguay was issued by legal authorities, but the data contained in the documents has been tampered with,” it was clarified.

“The charge against them is for using these documents. This investigation is still in the beginning and there may be other criminal acts involving Ronaldo and Roberto. It is important that they continue here in Paraguay during this process,” Legal insisted.

In light of the most recent developments, it appears they most certainly will, with the protests of Brazilian Minister of Justice and Public Security Sergio Moro, who called his counterparts in Asuncion to intervene, seemingly falling on deaf ears.

How To Use Attribute-Based Planning For A Green Supply Chain

You Don’t Have To Choose Between Selfless Giving...

Erling Haaland Investment Is Both Promise And Obligation...