Breaking
Which Party Is Best For Employment? Data Points...
3 Signs Your Latest Business Idea Has The...
Watchdog To Investigate Whether Trump Interfered With Health...
The Presidential Candidates’ Record On Small Business, Part...
Xtelligent Next-Generation Signals Use Algorithms And Artificial Intelligence...
Lawyer Pleads Guilty To Conspiring To Defraud The...
Consider Buying Encompass Health Stock For 20% Upside
Ranking The Best Claymores In ‘Genshin Impact’ (v1.0...
Do College Grades Predict Future Success?
How Gig Workers Can Engage With Organizations
Eight ‘Above And Beyond’ Vetting Practices For Executive...
Top Tips For Using Surfaces Across Google
E-Commerce SEO And How It Can Skyrocket Your...
Five Crucial Things You Shouldn’t Leave Out Of...
Artificial Intelligence And Africa: The Case For Investing...
Relax, The Computing World Won’t End In 2038....
Home Business Baseball’s Cheating Scandal Is Ushering In A Player Empowerment Era
Business

Baseball’s Cheating Scandal Is Ushering In A Player Empowerment Era 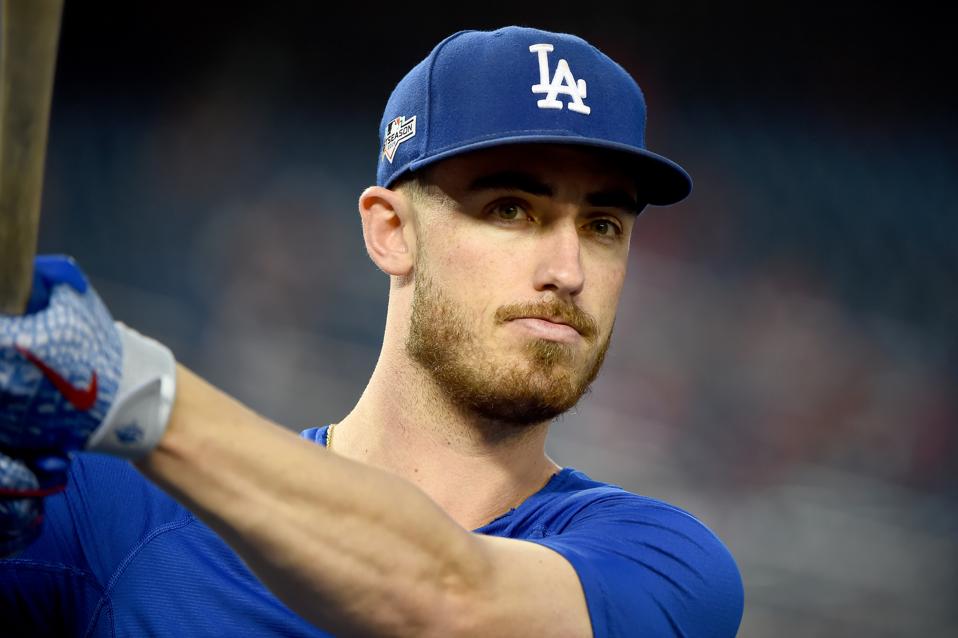 Cody Bellinger, Mike Trout and Aaron Judge are among the players ushering in a player empowerment … [+] era following the Astros cheating scandal. (Photo by Will Newton/Getty Images)

You’ve got to look for the positives within the negative, right? And fortunately, we just might be seeing the positives seep out now.

The Houston Astros cheating scandal might be Major League Baseball’s deepest, darkest black mark ever. Their World Series title will probably live in infamy forever, and the handling of the situation by MLB commissioner Rob Manfred is a hefty sidebar of all bad.

But through all the sludgy fallout, something is emerging that could change baseball for the better. It could change how the game is seen by casual fans, and how players are viewed in popular culture. It could shift how baseball is marketed as a whole.

We are seeing the first stages of baseball’s player empowerment era, a renaissance from the days of staying in line with what the bosses want. This could be the beginning of movement that is already in full swing in the NBA, where players are at the height of popularity for things other than their chosen profession, using live interviews, social media, streams, podcasts and their own TV shows as the vehicles to voice their thoughts and beliefs on everything from what is wrong in their sport to social issues to sneakers and music. 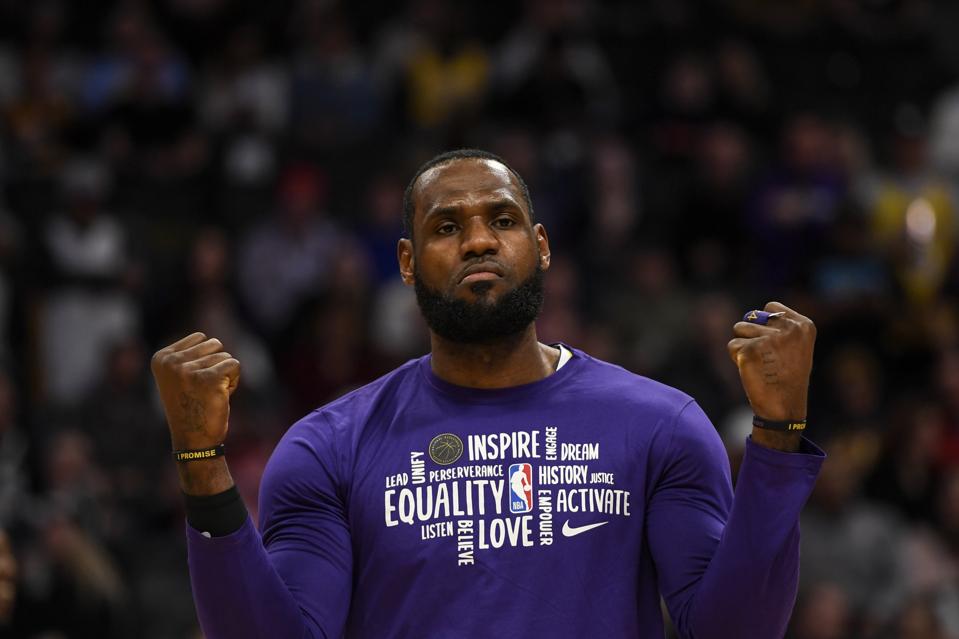 NBA players like LeBron James have stopped biting their tongues on what affects them. (Photo by … [+] AAron Ontiveroz/MediaNews Group/The Denver Post via Getty Images)

They are even speaking out on what’s wrong with baseball. Bradley Beal talked about how baseball is too stuffy of a sport, and LeBron James went in on the Astros scandal on Tuesday.

For the NBA, this has also led to player empowerment when it comes to choosing what teams they want to play for – maneuvering trades for others, for themselves and creating super teams with their boys. Billions of dollars of contracts are being handed out, and will continue to be, with the players holding most of the leverage on where they play, even if they are already under contract with another team.

This won’t happen in baseball until, at earliest, the current CBA expires in 2021. But this Astros scandal and the unforeseen consequence of players speaking their minds could change how those negotiations play out. 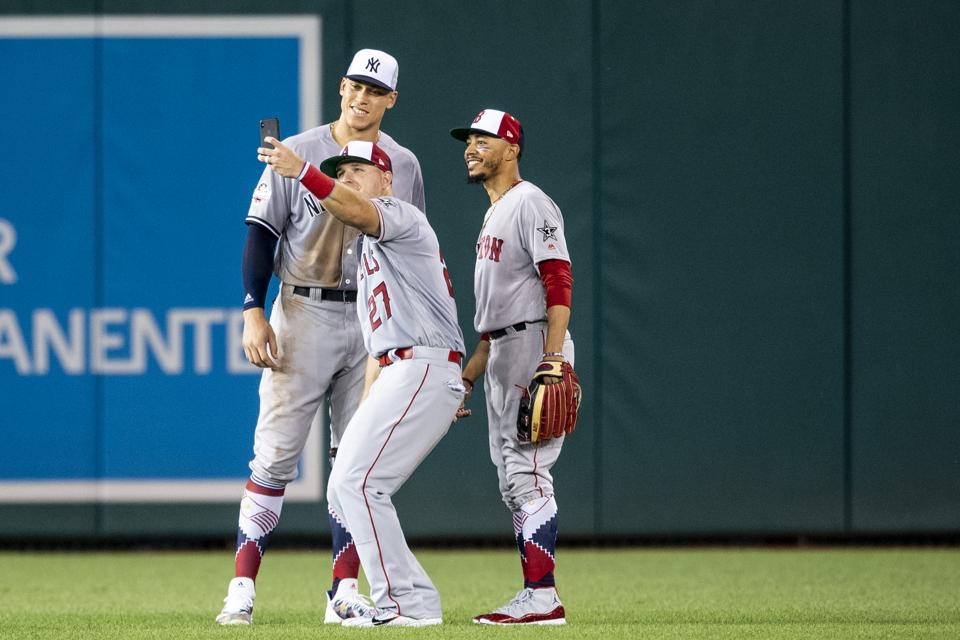 A lack of personality has hidden MLB stars, but speaking out about Houston’s cheating is changing … [+] that. (Photo by Billie Weiss/Boston Red Sox/Getty Images)

The surprising part isn’t that players are mad. It’s that they are saying they are mad.

Mike Trout. Cody Bellinger. Aaron Judge. Justin Turner. Trevor Bauer. Kris Bryant. And on, and on, and on. Players aren’t holding back, the way players in pro baseball clubhouses have been conditioned to do for so long. Keep things buttoned up, say all you can without saying a damn thing worth hearing. That has been baseball’s preferred communication strategy for too long, even as athletes in other sports speak out on issues that affect and/or concern them.

But this Astros scandal, and Manfred’s handling of the aftermath, hit today’s players differently and harder than anything before it, including the steroid era that has kept some of the sport’s best players out of the Hall of Fame as of now.

Joe Maddon, the thoughtful Los Angeles Angels manager, tried to keep his feet on that company line earlier this week. He said that the wounds of this scandal won’t heal until it stops being talked about day in and day out. But what that statement does not convey is that the players – the people keeping this story moving – talking about their feelings is how they are healing these wounds. Keeping quiet as MLB undoubtedly wants them to will not help them move past this.

This scandal could actually be good for the players. It is empowering them to never again shut up and play. What looked like one of the game’s darkest moments could lead it to again become appealing as players’ individuality and personalities start to show and shine.

Let’s Worry About Diagnostic Capacity, Not Just During Outbreaks

On CRM: LinkedIn Takes Another Big Step Towards CRM Integration