Breaking
Time For IMF Climate Coin (1/3)
Why Getting On TV Is Your Best Marketing...
Ask Larry: Can I Take My Social Security’s...
Students Can Get Hulu For Just $1.99 Per...
Documentary Calls Out Stereotypes, Issues Urgent Call-To-Action For...
The Best Preferred Stocks For 2021
China’s Rare Earths ‘Slump’ A Sign Of Domestic...
5 Ways To Promote Team Wellness This Winter
How To Refresh Your Business Ideas In The...
Yelp Is Now Accepting Covid-19 Safety Reviews …And...
What You Should Consider Before Entering An Intrafamily...
The Hidden Drag From The S&P 500 That...
The Flawed Inflation Narrative; And “V” vs. “U”
How, When And Where You Can See A...
Why You Should Stop Using Your Facebook Messenger...
IRS Collections Appears To Be Broken
Home Finance Battling Coronavirus Is Requiring A ‘World War’ Approach
Finance 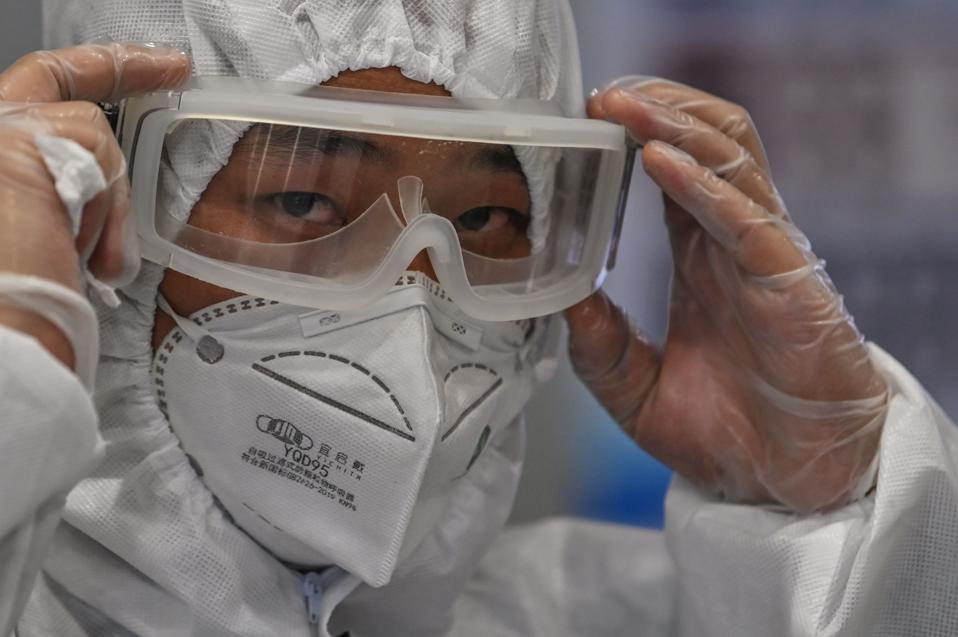 Airport security at Shanghai International Airport on March 26. China’s infection rates are rising … [+] outside of the epicenter of Hubei due to travelers. Now they’re counting asymptomatic carriers who test positive. Markets will get spooked. (Photo by Hector RETAMAL / AFP) (Photo by HECTOR RETAMAL/AFP via Getty Images)

The global pandemic is pushing the world economy to the brink. And while public health is surely more important than a healthy GDP, it is GDP growth that keeps people employed, which keeps them housed and fed and educated.

We have not hit peak coronavirus in Europe. We surely haven’t reached it here at home in the U.S. The stock market has not hit bottom, Wall Street consensus suggests.

In response to the ongoing extraordinary impact of the coronavirus pandemic on economic activity and financial markets, S&P Global Ratings this week marked down global growth to just 0.4% for 2020, their third reduction in three weeks.

“The decline in activity will be very steep. The policy challenges are enormous,” says Paul Gruenwald, global chief economist for S&P Global Ratings in New York. “The risks remain firmly on the downside,” he says.

This is a “stop the world” moment, literally and figuratively. Some pundits have called on President Trump to stop all international travel as infection rates are rising in Brazil and Mexico.

“Despite the near-term challenges and some dark days ahead, this may well prove to be our generation’s finest moment.” 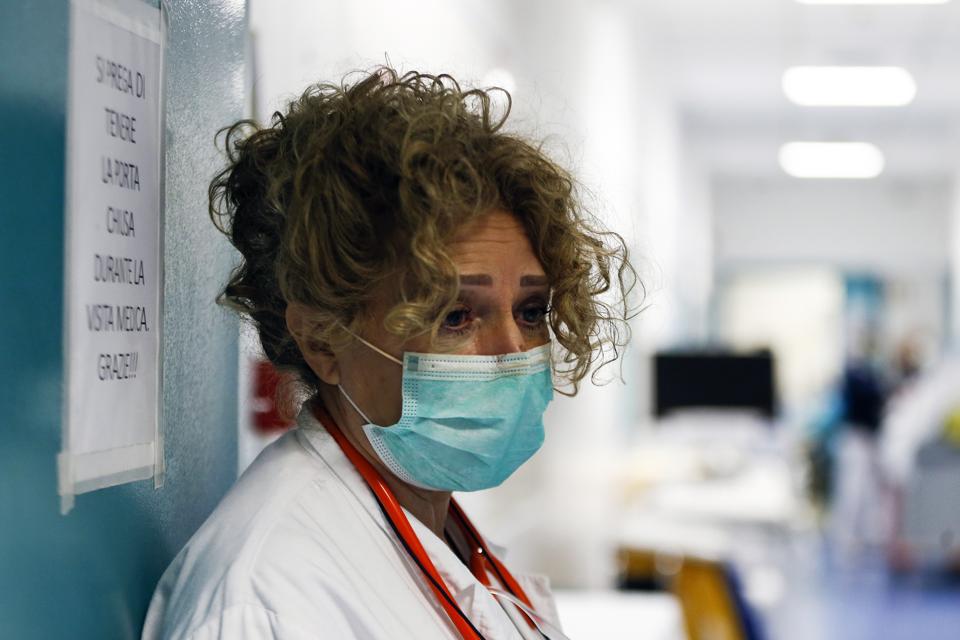 A medical staffer works at the Santo Spirito hospital in Rome, Monday, March 30, 2020. We all know … [+] who the Time Magazine Persons of the Year will be in 2020. (Cecilia Fabiano/LaPresse via AP)

The new SARS coronavirus pandemic has been compared to a world war by world leaders.

Spain’s Prime Minister Pedro Sanchez said, “We have never lived through anything like this.”

France’s president Emmanuel Macron said his country is “at war” with the coronavirus.

At home, President Trump likens it to an “invisible enemy”.

A military hospital ship not seen in New York since the September 11, 2001 terrorist attacks pulled into Manhattan on Monday. The city’s hospitals will empty patients out into that ship in order to make room in intensive care units for COVID-19 patients.

The U.S. is fast approaching 200,000 cases. That’s double the number of SARS coronavirus infections reported by China CI , where all of this began in December. Nearly 1,000 people have died in New York City in just two weeks due to COVID-19. 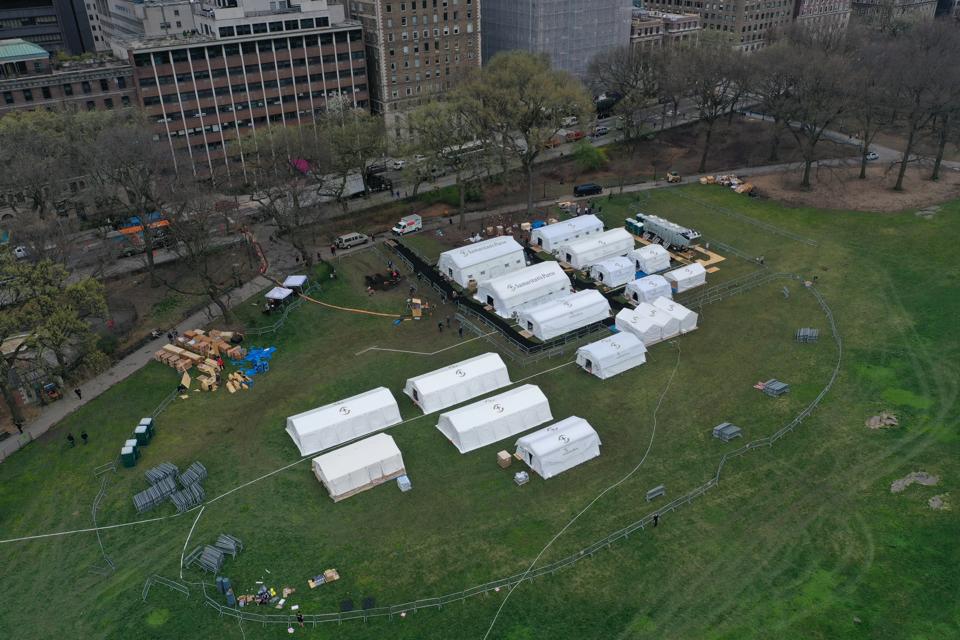 This is Central Park New York. It’s being turned into a M.A.S.H. unit. (Photo by Lokman Vural … [+] Elibol/Anadolu Agency via Getty Images)

It’s totally understandable to the electorate that when you’re at war with a deadly new pathogen that can shut down your economy, gut the employment of millions, and potentially send you to the poor house, that you are in a struggle for survival.

There is almost no limit to what government’s can do to spend and try to defeat the enemy. Like in a war, they will call on major production to be marshalled to defeat it, whether it’s My Pillow making surgical masks, or General Motors GM making ventilators. The people employed there are the new Rosie the Riveters.

“As someone from the Tri-State area, I’m thinking that once you get an abundance of masks, probably 9 out of 10 people here would be wearing one,” says Vladimir Signorelli, head of macro investment research firm Bretton Woods Research in New Jersey. “Why risk it? You’re hearing about surgeons that are losing their lives to this. Are they taking every precaution possible? Probably. And they’re still dying? The grim reaper is Mister Johnny One Note right now.”

Bretton Woods estimates that up to 23% of U.S. GDP is tied to retail, travel and tourism, food service, recreation and entertainment, and real estate. That’s all being flatlined.

At the height of World War II, when much of the world was at war with Germany or Japan, attention turned to the isolated U.S. for some hope. After the attack on Pearl Harbor by the Japanese, Washington took an “all of country” approach to fighting the enemy. And with it, the full resources and productive capacity of the U.S. economy turned to the war effort. 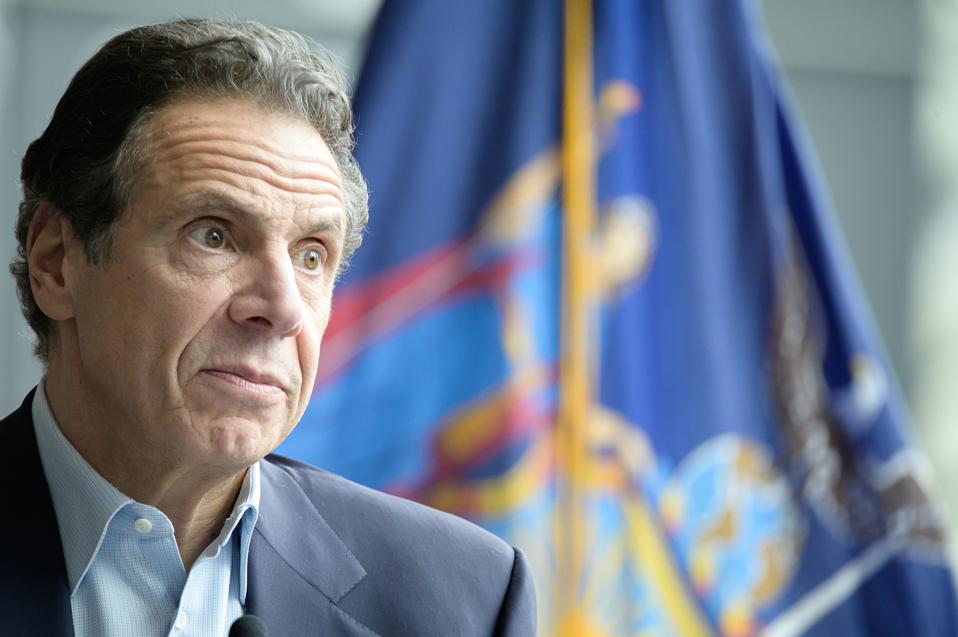 New York Governor Andrew Cuomo is now leading the state through the epicenter of the worst viral … [+] outbreak the U.S. has seen since the Spanish Flu in 1918. (Photo by Albin Lohr-Jones/Pacific Press/LightRocket via Getty Images)

By 1944, the United States accounted for 40% of the world’s total munitions, with war production reaching a peak of 44% of GDP. The overall productive capacity of the nation’s economy increased by 50%, while industrial output expanded by 60% to build massive weaponry — from warplanes to bombs and battleships. This massive mobilization of resources turned the tide of the war and allowed the Allies to win World War II.

The World Health Organization said the pandemic needs an “all of government, all of society” approach to be defeated.

Some have called for a Manhattan Project-type of initiative to fast-track the development and deployment of genetic therapies, pharmaceuticals, medical devices, and basic medical supplies to help combat a disease we still know very little about.

The scientific community, medical profession, and healthcare industry are working closely with government health officials and policymakers. Realities on the ground shift responses, and priorities all the time. As one nurse dealing with this in the U.S. said to me, “it’s a bit like working in quick sand.”

“This is like September 11 in my mind,” says Sam Hendel, a fund manager of Levin Easterly Partners in New York. “September 11 led to the creation of the Department of Homeland Security. A whole new industry was created after those terrorist attacks. There’s going to be some massive money moved into diagnostics, in healthcare, in pharmaceuticals…all because of this war with SARS.”

Like World War II, the new SARS coronavirus is a conflict that will be waged across multiple theaters of operation, says Michael Ryan, chief investment officer for UBS Financial Services PNC . Public health officials will deal with disease containment; finance ministers and central bankers will deal with the economic shocks. 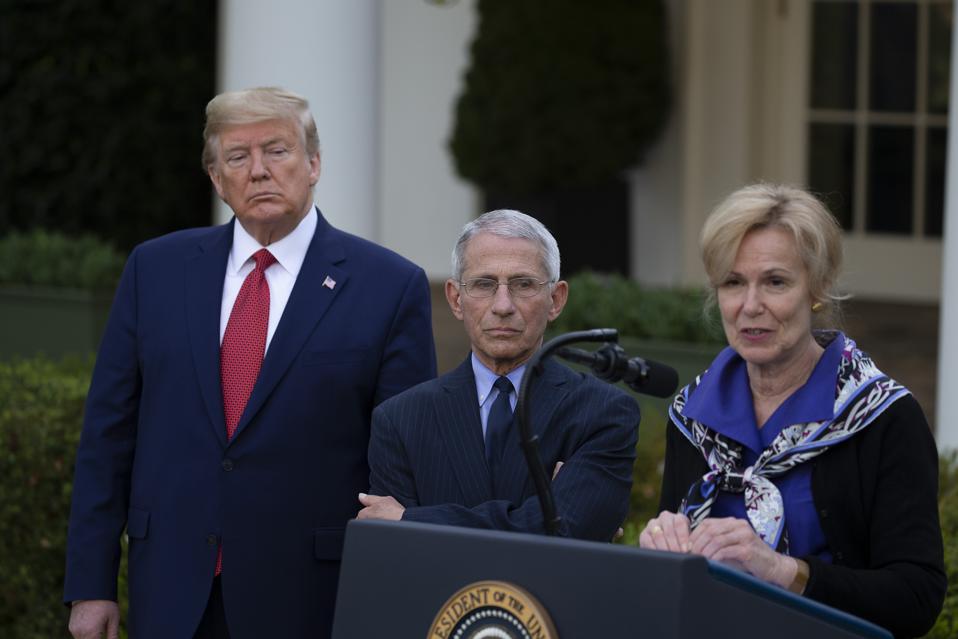 The next viral outbreak should not be allowed to stop a country dead in its tracks again. The goal posts in the coronavirus end zone keep moving. Everyone is still learning about the new SARS.

To casual observers of history here at home, World War II was won because the U.S. joined the fight. Russia, too, played a role when it broke with the Germans, essentially surrounding them.

Writing in an impressive and creative note to clients on March 28, UBS’ Ryan pointed out that those who lived through the war will attest that there was nothing inevitable about the outcome.

The entry of the U.S. tipped the scales against Germany and Japan, but final victory required careful planning and breaking bread with the Russians, as well. It required an all hands on deck commitment, political unity and an ongoing deployment of resources designated for a single purpose.

It’s looking like it will be the same with COVID-19, Ryan writes.

“With the U.S. having now joined the effort with a massive mobilization of resources, the balance of power in this conflict has shifted,” he says.

At first it was China, then Europe, now the U.S. is next to suffer in battle.

“We will eventually win out over the virus, but the timeline is still not assured. We are confident that the combined resources and united will of the leading nations of the world will prove successful in containing it, protecting public safety, stabilizing the global economy, and preserving personal prosperity,” he says, adding: “Despite the near-term challenges and some dark days ahead, this may well prove to be our generation’s finest moment.”

Want To Keep An Eye On Local Housing Trends? Try These 16 Strategies

If The Virus Can Decimate Global Economies So Can Climate Change