Breaking
Looking To Improve Efficiency In Your Business? Here’s...
AI and machine learning for business
How Social Media Changed the World
Shopify: The Pros and Cons
Should your business go green?
Expanding Your Business Into Spain: What You Need...
Essentials For Your Office Coming Out Of COVID-19
What Can Marketers Learn From Digital Cults?
Why NASA’s James Webb Space Telescope Will Never...
Increasing HR Effectivity and Efficiency through Software Solutions
The Difference Between Building A Startup In Bull...
Fluor Corp Ranked Among Today’s Top Shorts
Common Pitfalls to Look Out for When Buying...
Will the Olympics go ahead this year?
Pack Up the Big Top: Insights from MozCon...
Best WordPress Themes for Blogs
Home Business Baylor’s Dave Aranda, South Florida’s Jeff Scott Among Power Five Coordinators Who Landed Their First Head-Coaching Gigs
Business 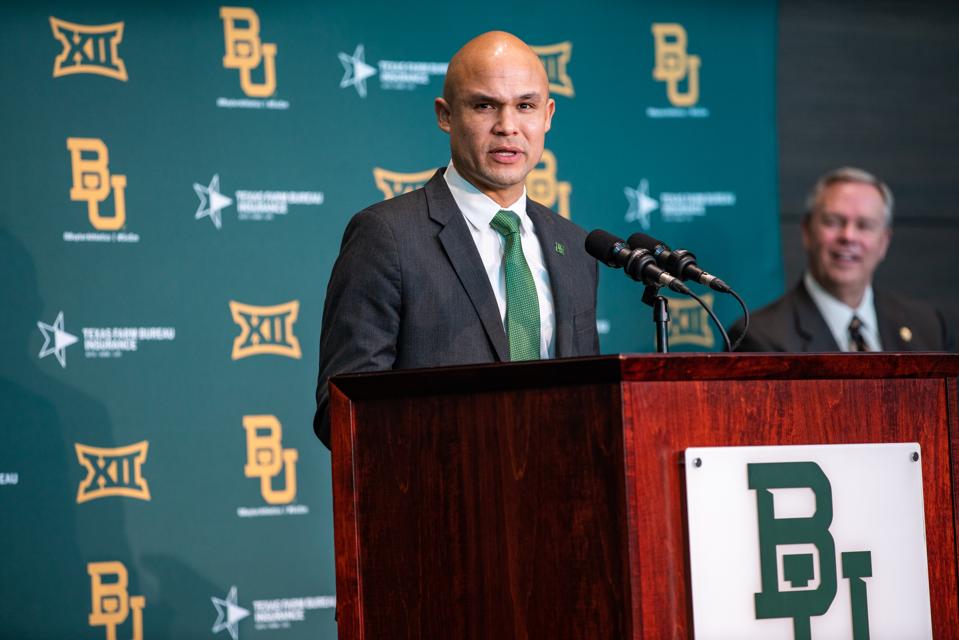 Baylor hired Dave Aranda as head coach on January 16 to replace Matt Rhule. Aranda was the defensive … [+] coordinator at LSU the past four seasons.

While Mark Dantonio’s replacement at Michigan State could qualify for inclusion among those listed below, seven of the 22 vacancies in the Football Bowl Subdivision prior to the veteran coach stepping aside were filled by Power Five coordinators. In each case, the programs they now lead represents their first opportunity as a head coach at the collegiate level.

The group ranges in age from 39-44. Two of them, Dave Aranda and Jeff Scott, went against each other in last month’s national championship game and have combined to win three national titles in the past four years.

Here is a look at each of those seven first-year head coaches.

The 43-year-old Aranda has been a defensive coordinator at the FBS level since 2010, including the past four seasons at LSU. He goes from winning a national title in Baton Rouge to what is a very good situation in Waco. Thanks to Matt Rhule, every facet of the program is light years ahead of the scandal-ridden disgrace the now-Carolina Panthers coach inherited three years ago. The Bears went from one win in 2017 to 11 wins a Sugar Bowl appearance in 2019.

Aranda, who in the past decade has also been a defensive coordinator at Wisconsin, Utah State and Hawaii, spent his last two years in Baton Rouge as the nation’s highest-paid assistant at $2.5 million per. His deal with Baylor, a private institution, has been reported at six years. Aranda’s first hire was naming Ron Roberts defensive coordinator. It was at Division-II Delta State in 2007 that Aranda was the DC under Roberts, who spent the past two seasons as the DC at Louisiana.

Arroyo, who spent the past three seasons as the co-offensive coordinator at Oregon where he groomed Justin Herbert, has his work cut out for him. The Rebels have had one winning season in the last 19 and eight times in the last 10 years they won no more than four games. At least the 40-year-old comes on board at a time when there are new facilities with which to entice recruits. A football complex opened in October and next season UNLV will share Allegiant Stadium with the NFL’s Raiders.

Arroyo, who also worked with quarterbacks and tight ends under Willie Taggart and Mario Cristobal in Eugene, spent two seasons as running backs coach at Oklahoma State prior to his stint with the Ducks. Arroyo, who signed a five-year deal that starts at $1.5 million, served as interim offensive coordinator with the Tampa Bay Buccaneers in 2014.

Bob Davie’s last three seasons at New Mexico included allegations of abuse and all of eight wins. Safe to say that a breath of fresh air was needed in Albuquerque and Gonzales, a native of the city and a former Lobos safety, punter and assistant, was a popular choice to get the needle pointed in the right direction. His contract calls for $700,000 annually over five years.

Gonzales, 44, was Herm Edwards’ defensive coordinator the past two seasons at Arizona State. After allowing 32.8 points per game in 2017, the Sun Devils showed marked improvement under Gonzales by allowing 25.5 points in 2018 and 22.4 in 2019. The Lobos’ defense in 2020 will be headed by a familiar face: 70-year-old Rocky Long. Gonzales spent 11 years playing and working under Long at New Mexico before reuniting with him at San Diego State. Gonzales coached the Aztecs’ safeties for seven seasons (2011-17) and added DC responsibilities in 2017.

The Eagles went 44-44 in seven seasons under Steve Addazio and the 40-year-old Hafley was enlisted to provide the program with a much-needed jolt. As the co-defensive coordinator (with Greg Mattison) at Ohio State last season, his only one with the Buckeyes, Hafley helped oversee a unit that went from 72nd nationally in total defense to first. That led to being a finalist for the Broyles Award, given to the nation’s top assistant coach.

Prior to his lone season in Columbus, Hafley spent seven years as a defensive backs assistant in the NFL with the 49ers, Browns and Buccaneers. He also coached DBs at Albany, Pitt and Rutgers before heading to Cleveland for his first NFL gig. Hafley’s deal at BC has been reported to be near $3 million. Addazio made $2.8 million in 2019.

The Huskies maintained continuity by elevating Lake the day after their Las Vegas Bowl win over Boise State. The 42-year-old spent the past eight years under Chris Peterson, who surprisingly announced his resignation in early December, including the last six with Washington. With UW, Lake initially served two years as defensive backs coach followed by two years as co-defensive coordinator before spending the past two seasons as the DC. In 2019, the Huskies allowed 19.4 points per game marking the fifth straight year they allowed less than 20 points per contest.

Lake, who last season was the highest paid assistant in the Pac-12 at $1.3 million, will be paid $3 million annually over five years. Lake came to Seattle with Peterson after serving under the latter at Boise State as defensive backs coach for two seasons. Prior to that assignment Lake was in the NFL for five seasons, including two stints with the Tampa Bay Buccaneers.

Rahne’s creative offensive mind is more than welcome in Norfolk after the Monarchs went 1-11 last season and ranked 127th in scoring (16.3 points) and 128th in total offense (274 yards). Rahne, 39, moved with James Franklin from Vanderbilt to Penn State where he spent the past six seasons, the last two as offensive coordinator. The 40-year-old’s stock rose considerably the past couple of seasons as the Nittany Lions maintained a high-powered attack despite the departures of running back Saquon Barkley and quarterback Trace McSorley in consecutive years.

The former Cornell quarterback, who was the Big Red’s all-time career leader in passing yards and touchdown passes when he graduated, takes over a program that started up in 2009 and transitioned to the FBS in 2013. The Monarchs have had some success, including a 10-win season in 2016 in which they went 7-1 in Conference-USA. Rahne’s five-year deal calls for a base salary of $750,000. 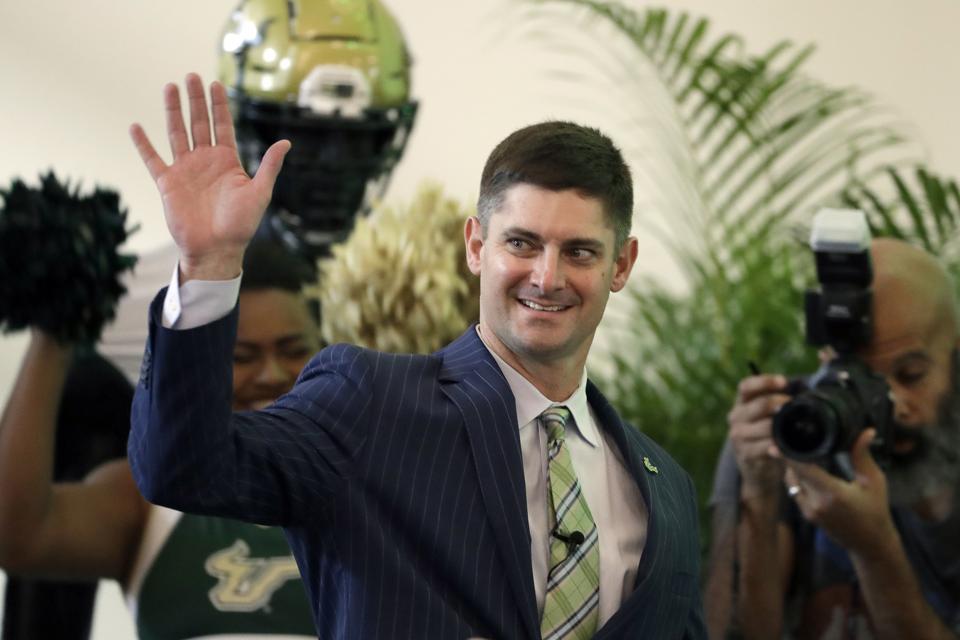 Jeff Scott was introduced as South Florida’s head coach on December 11, 2019. He was the … [+] co-offensive coordinator at Clemson, where he won two national championships. (AP Photo/Chris O’Meara)

If ever there was a Power Five coordinator ready to take over a program, Scott seems to be it. Scott’s youth (39) and enthusiasm won people over the moment he was introduced as the Bulls’ fifth head coach. The son of former South Carolina coach Brad Scott, who graduated USF in 1979, was a Clemson receiver and spent 12 years on Dabo Swinney’s staff. Scott rose to be the Tigers’ co-offensive coordinator (with Tony Elliott) the past five seasons during which Clemson won a pair of national titles and finished in the top 12 nationally in total offense four times.

Scott takes over a program that has lost 14 of its last 18 games and had little offensive rhythm last season. While it will take time for Scott to shape and mold the Bulls to his liking, a huge plus is the fact he recruited the state of Florida while at Clemson. The deal Scott signed with USF is for $12.5 million over five years.

Does The Coronavirus Outbreak Mean That You Should Avoid Large Meetings