Home Technology Bear On The Loose In LA Suburb, How To Handle A Bear Encounter
Technology

Bear On The Loose In LA Suburb, How To Handle A Bear Encounter 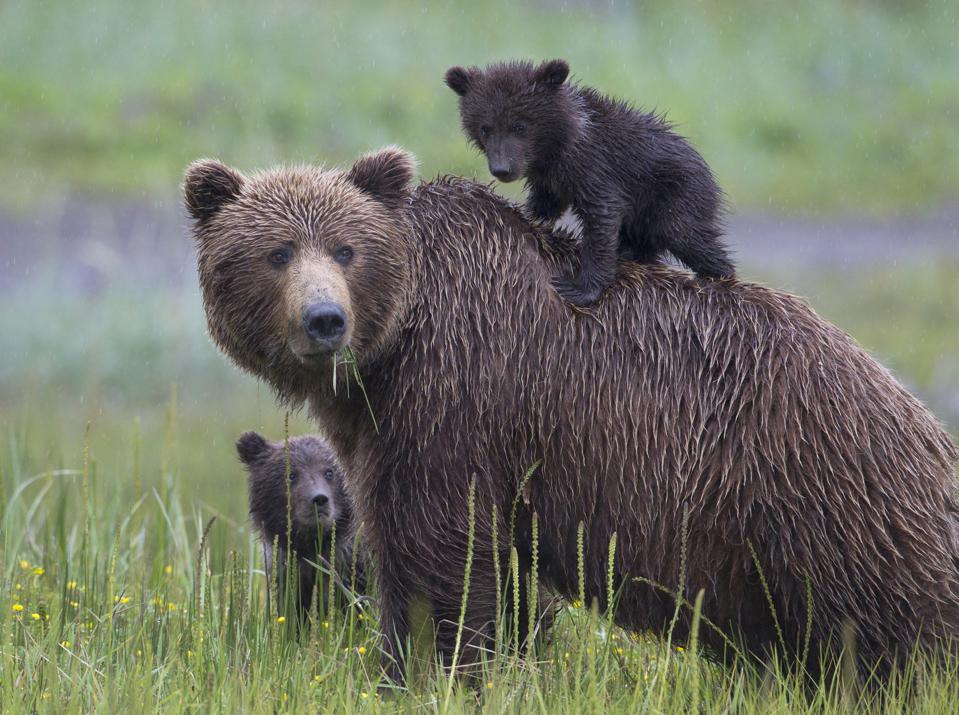 These weren’t the bears that roamed a Los Angeles suburb on Friday. But what should you do when you … [+] encounter any bear or bears? (Photo: Getty)

Maybe this bear had put the wrong address into a smartphone or was looking for a Meetup that didn’t quite materialize. Or perhaps humans had disrupted her habitat too much.

For whatever reason, a wild bear was roaming the streets and sidewalks of Monrovia, California, a suburb of Los Angeles today, as can be seen in this Associated Press video:

The bear wasn’t creating a ruckus and, in fact, was bear-ly causing any trouble. Even an encounter with dog didn’t elicit much reaction:

However, as this Fox 10 Phoenix video showed, the bear did attract a crowd of onlookers:

Umm, what are you all doing getting so close to the bear? Twitterer @JeffRogstadCTV was appalled:

And the humans were making @deltorophoto sweat:

Then, @barkflight called them “geniuses,” but not in a good way:

Yeah, standing so close when you don’t know what a bear may suddenly do is not real genius. It is the exact opposite.

So, what should you do when you see a bear? Well, the National Park Service (NPS) website has some advice, and that advice does not include standing near the bear filming with a smartphone. The NPS does say that the best way to avoid a bear attack is to avoid an encounter with a bear. No bear, no bear attack.

But what if you accidentally encounter a bear, such as when going on a hike, having a picnic, or stepping into the sauna? The NPS does have advice for this as well. The first piece of advice is to identify yourself. This doesn’t mean offering the bear your business card or sharing your LinkedIn profile. Bears typically are not hiring. Instead, this means making it clear that you are a human and not a charcuterie board. For example, slowly waving your arms will distinguish yourself from most charcuterie boards.

The NPS also recommends staying calm. Specifically, the NPS suggests talking to the bear in low tones so that you are not threatening. Maybe a bit like James Earl Jones. Except don’t say, “You don’t know the power of the dark side!” High pitched tones and screams may startle the bear and trigger an attack. This may not be the best time to try your rendition of the song Shallow. The NPS tells you to never imitate bear sounds as well. After all, you cannot speak bear and may be accidentally insulting the bear’s entire family and BTS at the same time.

A third piece of advice from the NPS is to pick up small children immediately. Do not do this in general when no bear is around and the children are not yours. Doing so could get you arrested. Instead, the advice is specific to a bear encounter because little children could inadvertently run towards or provoke the bear.

A fourth piece of advice is to hike and travel in groups. Yes, it can stink to be alone on Valentine’s Day or a bear encounter. But like it or not, a larger group can warn bears in advance to stay away. This is yet another reason to hang out with the Kansas City Chiefs’ offensive line.

Additionally, the NPS suggests making yourselves look as large as possible. Yes, while it may not be good to manspread on the subway or at work, this is one situation where it could save you from an attack. This applies to womanspreading too. Doing so can intimidate the bear, who may just want to avoid trouble.

Other advice from the NPS includes not feeding the bear or allowing access to your food. Offering food could actually encourage the bear, like offering an appetizer before a main course.

Once you have done the above such as remaining calm and not going berserk, try to leave the area before an attack can occur. In other words, do exactly the opposite of what the folks were doing in Monrovia. The NPS suggests that you move away slowly and sideways. This is not to begin the “Electric Slide,” but instead allows you to watch the bear while moving away, not tripping, and remaining non-threatening. Running can make you seem like prey, which is not a good look. Climbing a tree won’t help because that’s what bears can do too.

As with your political rivals and cats (which also may be your political rivals), never leave a bear with no way to escape. Cornering a bear can make him or her fight with fury. Oh, and if you try to get between a bear and the bear’s cubs, bad idea. That’s like threatening any parent’s children.

If a bear attacks, then it is important the determine whether the bear is a brown or grizzly bear versus a black bear. Your response should be different to each type. For a brown or grizzly bear, the advice from the NPS is to play dead because such bears tend to attack only to defend their territory and cubs. Dead things usually don’t seem like threats. The NPS recommends laying ﬂat on your stomach, clasping your hands behind your neck, and spreading your legs so that the bear will have a harder time turning you over like a flapjack.

Here is a National Geographic video on how to survive a grizzly attack:

The “playing dead” thing won’t work for black bears. Unlike brown or grizzly bears, black bears tend to attack to eat. Playing dead then will say, “I am a charcuterie board.” Instead, you want to say, “I am MMA fighter Valentina Shevchenko,” and fight to escape. As is the case in Las Vegas casino buffets, things that fight back don’t tend to get eaten.

If the bear encounter is a surprise, such as when you are walking home to your suburban home in Monrovia, California, then chances are you won’t have bear pepper spray on you. However, if you plan on going somewhere where bears are likely to be roaming such as a forest or a bear night club, try carrying some bear pepper spray. Make sure that it is real bear spray with a noxious ingredient like capsaicin and not a spray to make teddy bears more fragrant. Real bear spray can help repel bears. Teddy bear sprays won’t.

Most importantly, when you see a wild animal like a bear, keep in mind what comedian Taylor Tomlinson has said in her stand-up act. The line goes, “I’ll have you know in bed I am a wild animal. Yeah, way more afraid of you than you are of me.” It is true that most wild animals aren’t looking to get into a fight. A bear that roams into a suburban area may just be lost and disoriented. So, when you see a bear anywhere that’s unexpected, stay a safe distance, don’t do anything to provoke the bear, and contact the police or other local authorities as soon possible.

For the bear who was roaming in Monrovia, California, law enforcement first tried to allow the bear to wander back to her home:

However, without a smartphone, maybe the bear couldn’t quite find her way home. This is then what eventually happened:

How A Small Family Business Is Making Copper...