Breaking
Rival Independent ‘Oversight Board’ Formed By Facebook’s Rivals
Meet George The Poet: Spoken Word Artist Partnering...
Parrot Plumage Color May Be Linked To Body...
Best Applicant Tracking Software
Recent Precious Metals Dip A Buying Opportunity
Looking For Venture Capital? Here’s How One 50+...
Trump Will Create More Debt Than Obama
Growing Your Retirement Money Using 401(k) Dollar-Cost Averaging
Wellness Exec Abby Miller Levy Partners With Venture...
Microsoft Teams Issues Strike To Zoom With Tidal...
What’s Coming For The S&P 500 In October
4 Ways You Can Showcase Empathy With Your...
A $22,000 Microsoft Surface Will Soon Be For...
Zooming In – Should SMEs Invest In The...
iOS 14: The Surprising Security Risk Of Sharing...
How A Break From Lord Sugar Changed The...
Home Finance Bearish Trendline Snuffs Out BGS Rally
Finance

Packaged food manufacturer B&G Foods (BGS) is having a hard time capitalizing on today’s broad-market bounce, down 3% at $15.63 at last check. And while the equity is still enjoying a monthly gain of 14.7% this rally appears to have been thwarted by its 160-day moving average earlier today.

This isn’t the first time this trendline has worked as overhead resistance either, and according to data from Schaeffer’s Senior Quantitative Analyst Rocky White, this signal has spelled even bigger losses for B&G Foods in the past. White’s data shows this signal flashing one other time in the last three years. Following this run-up, BGS was down 3.45% five days later. A similar move from its current perch would put BGS right back above the $15 level. 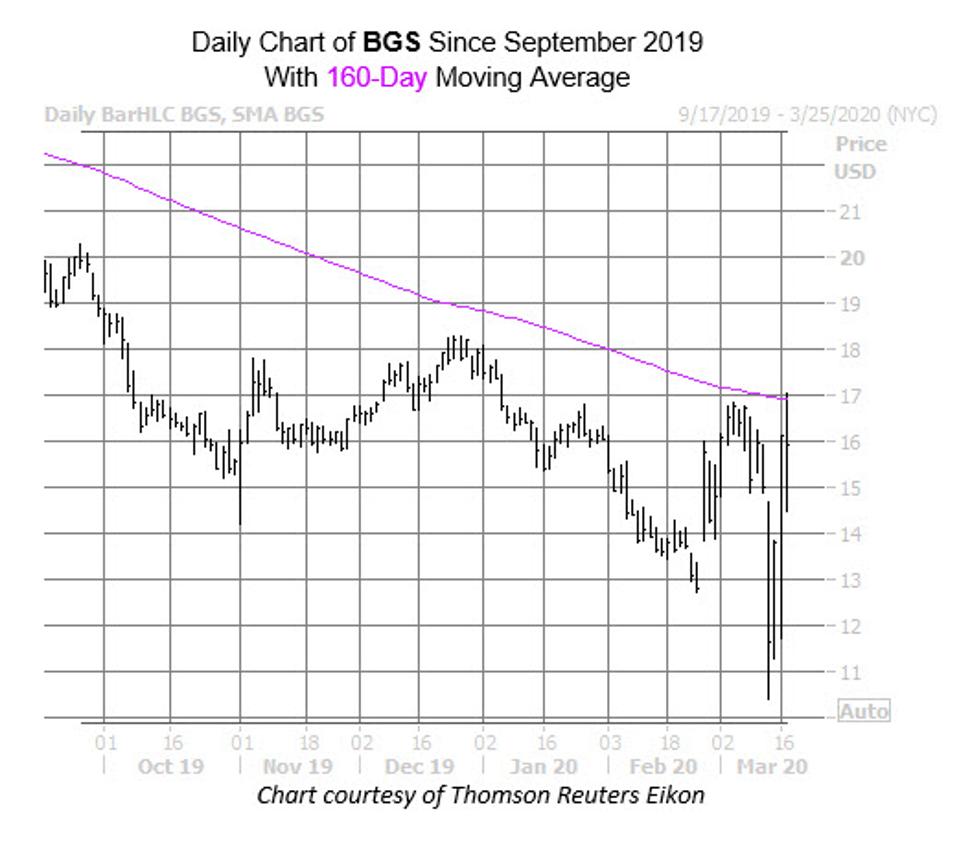 Sentiment surrounding the food producer has been less-than-optimistic. The three analysts covering BGS consider it a “hold,” and the consensus 12-month price target of $15.14 is at a slight discount to current levels.

The options pits have taken a slight more bullish stance, with 1,596 calls across the tape in the past 10 days, more than double the number of puts exchanged. Short interest has started to drop off as well, down 3% in the last reporting period. Short sellers are still firmly in control of BGS, though. The 24.84 million shares sold short make up nearly 40% of the security’s available float, and over three weeks at its average daily pace of trading.