Breaking
Meet Onesimus, The Enslaved Man Who Saved Boston...
How to Build a Sales Forecast Model
The Unexpected Ways COVID-19 Has Forever Changed What...
Google Posts: Conversion Factor — Not Ranking Factor
How To Bring Your Branding To Life
Coinbase Cofounders And Investors Poised To Rake In...
How To Stay Top-of-Mind For Your Audience With...
Employers: Eight Red Flags You May Not Notice...
The benefits of videoing in the automotive industry
Ted Lasso, Other Apple TV+ Shows Arriving Soon...
How To Incorporate Click And Collect Into Your...
What Are Working Capital Loans and When Should...
The 10 Biggest Trends in Entrepreneurship to Look...
Clubhouse Has Grown 10X In Two Months. Here’s...
Here’s Why Tyson Foods Stock Looks Undervalued At...
How To Maintain Client Relationships During Long Projects
Home Technology ‘Beautiful,’ Trump Says Of Aggressive Tactics Used On Minneapolis Protesters Including Tear Gas
Technology

President Trump during a roundtable in Dallas shared details of an executive order he plans to issue in response to the protests against police violence while he continued to endorse aggressive tactics used by police in cities like Minneapolis and misrepresented calls to defund or disband departments. 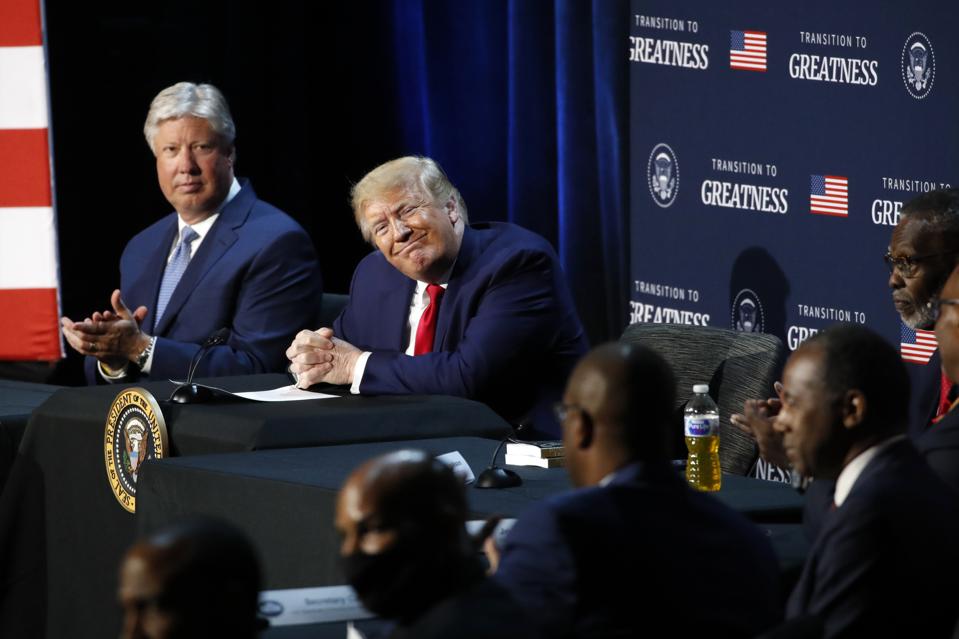 The executive order “will encourage police departments nationwide to meet the most current, professional standards for the use of force, including tactics for de-escalation,” though he didn’t detail what his administration considers those “current” standards to be.

The order would encourage “pilot programs that allow social workers to join certain law enforcement officers,” like in response to mental health emergencies, for example.

Trump characterized the order as “force with compassion” as he further endorsed aggressive actions taken by law enforcement against largely peaceful protesters, calling demonstrations in Seattle, where protesters have claimed control of a six-block area, “so easy to solve.”

Regarding the deployment of National Guardsmen in Minneapolis, Trump said, “I’ll never forget the scene, it’s not supposed to be beautiful but to me it was…And yes there was some tear gas and probably some other things, and the crowd dispersed.”

Trump also mentioned pursuing economic development in minority communities and improving the availability of capital to small businesses, and renewed his call to Congress to promote “school choice.”

Trump also again mischaracterized calls to defund or disband police departments, saying, “they actually want to get rid of” police.

Proponents of defunding aim to reallocate some of police departments’ budgets to social programs, while the goal of disbanding is to build a new force from the ground up, as has been done successfully in Camden, N.J., with a county force employing more officers than the previous department.

Seattle protesters created an area called the “Capitol Hill Autonomous Zone” after police vacated its East Precinct headquarters. The peaceful demonstrators use the space to share food, medical supplies and hold movie screenings. Trump took to Twitter to denounce Washington Governor Jay Inslee and the city’s Mayor Jenny Durkin, who has condoned the encampment. She fired back, “Make us all safe. Go back to your bunker. #BlackLivesMatter.” Black Lives Matter has filed a lawsuit alleging “unnecessary violence” by the police in Seattle.

The Trump administration hasn’t endorsed any policy proposals since the death of 46-year-old George Floyd on May 25. An unarmed black man, Floyd died while Minneapolis police officer Derek Chauvin knelt on his neck for nearly nine minutes while three other officers stood by. On a local level, Los Angeles Mayor Eric Garcetti has tossed out a planned budget increase for the LAPD while the Minneapolis City Council has voted to disband the Minneapolis police force. On the federal level, House Democrats introduced a police reform bill that would ban chokeholds, create a national registry for police misconduct and require training that covers racial bias. However, a key aspect of the bill—ending the qualified immunity doctrine that greatly protects officers from lawsuits—was called a nonstarter by the White House.

In Philadelphia, These Small Businesses Depend On Universities Reopening