Behind Enemy Lines: FC Barcelona’s 5 Best Wins At The Bernabeu 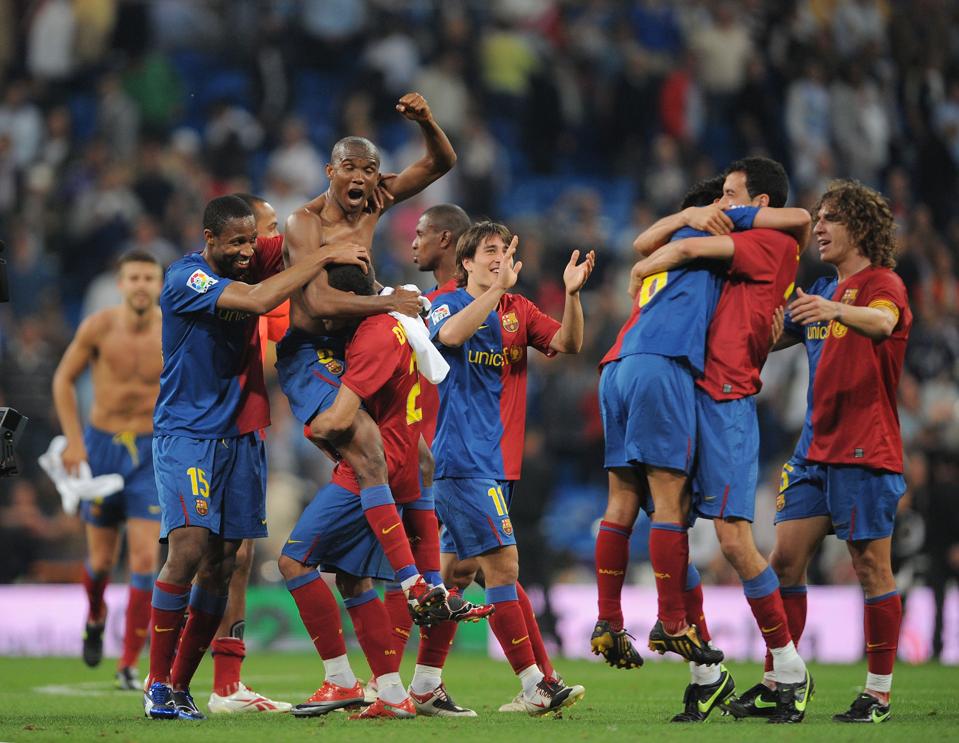 MADRID, SPAIN – MAY 02: Samuel Eto’o of Barcelona raises his fist in celebration beside Seydou … [+] Keita (L) after Barcelona beat Real 6-1 during the La Liga match between Real Madrid and Barcelona at the Santiago Bernabeu stadium on May 2, 2009 in Madrid, Spain. (Photo by Denis Doyle/Getty Images)

Seeming to always rise to the occasion in El Clasico, FC Barcelona have enjoyed some historical wins when facing Real Madrid at the Bernabeu.

Here, we look at some of their greatest triumphs behind enemy lines in the Spanish capital. 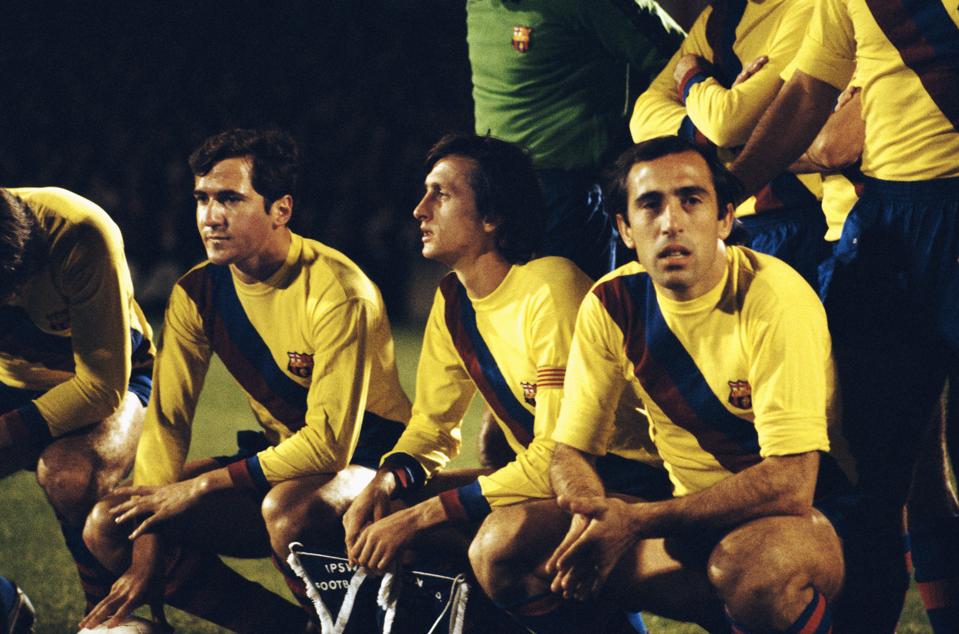 In Johan Cruyff’s first ever Clasico, played under compatriot coach Rinus Michels, Juan Manuel Asensi opened the scoring on the half hour mark before the Dutchman made it two nine minutes later.

Following the interval, there were three further strikes from Asensi, Juan Carlos and Hugo Sotil over a 15 minute period that sentenced Los Blancos to a humbling defeat in front of their own fans. Before this, Barça had only won six Clasicos across 42 meetings.

The One Where Madridistas Gave Ronaldinho A Standing Ovation, were it to be named like a sitcom episode.

Its cast reading like a list of the best players of the 2000s, this installment of the world’s biggest derby featured stars such as the Brazilian himself, compatriots Ronaldo, Roberto Carlos and Robinho, plus Zinedine Zidane, a budding Lionel Messi, Xavi Hernandez, Andres Iniesta, Iker Casillas, Raul and Samuel Eto’o to name a few.

Eto’o opening the scoring around the half hour mark, the soon-to-be-crowned Ballon d’Or winner handed the golden ball gong in Paris over a week later stunned the Bernanbeu then brought it to its feet in appreciation with an 18 minute brace completed in the 59th and 77th minutes.

The first reproduced above, its sequel was almost identical in Ronaldinho picking the ball up on the left flank, gliding towards the box around a string of white shirts and slotting home past Spain number 1 Casillas.

Aware they were being treated to an exhibition from a modern day legend, the Bernabeu faithful could only surrender and voice appreciation towards their arch rival’s biggest star at the time en masse. 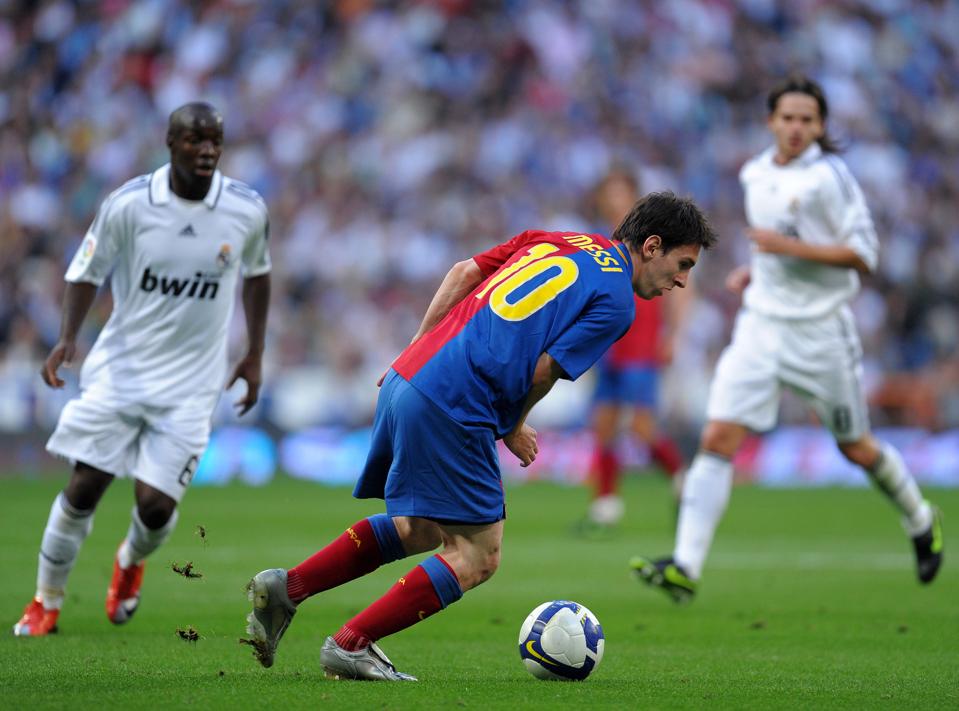 MADRID, SPAIN – MAY 02: Lionel Messi of Barcelona controls the ball during the La Liga match … [+] between Real Madrid and Barcelona at the Santiago Bernabeu Stadium on May 2, 2009 in Madrid, Spain. Barcelona won the match 6-2. (Photo by Jasper Juinen/Getty Images)

The title at stake with just weeks to spare in the 2008-2009 campaign, Barça were attempting to win their first in three years in Pep Guardiola’s maiden term and prevent Madrid from completing a back-to-back trilogy.

“It was when the coach put Leo Messi in as a false nine,” Xavi later explained to the Daily Mail.

“He knew that Madrid’s defenders wouldn’t follow Messi when he dropped back into midfield, which meant that Messi, Iniesta and I could play a three-on-two in the middle of the pitch. He said to us: ‘And that is where the game is! That is where the game is!’”, revealed the Catalans’ all-time apperances leader of the thrashing some years later.

Opening up a seven point gap at the summit, the sextuple hammering achieved by braces from Thierry Henry and Messi, plus single strikes from centre backs Carles Puyol and Gerard Pique as Xavi notched a quartet of assists, essentially crowned Barça champions.

Lifting the Copa del Rey 11 days later, Pep’s Tiki-taka heroes roared on to an unprecedented six trophies by the time that year and decade had been drawn to a close as Spanish, European and world conquerers. 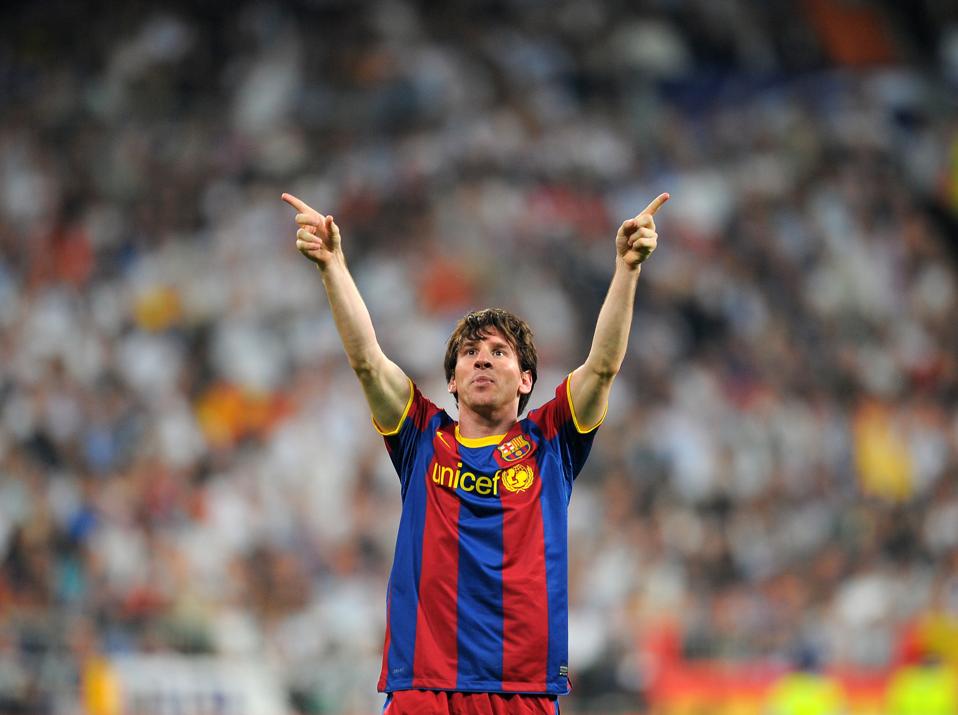 Meeting four times in 18 days across three competitions, the arch rivals’ first encounter, in the league, was drawn 1-1 each thanks to penalties from Cristiano Ronaldo and Lionel Messi before the Portuguese’s 103rd minute extra time strike stole the Copa del Rey.

By the first leg of their Champions League semi-final encounter, then, tensions were at fever pitch with coaches Jose Mourinho and Guardiola continually firing shots at one another in the media.

Pepe dismissed in the 61st minute of a tight affair, the spaces began to open up and saw Lionel Messi put Barça ahead after meeting Ibrahim Afellay’s cross in the 76th. Eleven later, the Ballon d’Or king scored one of his favourite career goals in a “unique moment” as he called it last year, to all but sink Madrid with the finish from a sensational midfield run.

The second leg drawn 1-1 at the Camp Nou, Barcelona went on to lift a second UCL trophy in three seasons in the Wembley final at Manchester United’s expense.

Yet another in which there were no goals in the first half, Ernesto Valverde’s talk at the interval must have helped rouse the troops, who came roaring out of the tracks in the second.

Luis Suarez netting his side’s opener on 54 minutes, following a slick exchange of passes between himself, Ivan Rakitic and Sergi Roberto approaching the box, Dani Carvajal was red carded for a handball in the 63rd to allow Messi to convert the resulting penalty.

Aleix Vidal making it three in stoppage time, the thrashing opened up a 14 point lead over Madrid ahead of the winter break. Contributing to their comfortable clinching of the 2017-2018 championship, the achievement was among the greatest in Valverde’s now-terminated reign.

Would You Work With A Robot?

The Six Rules For Crushing It On Linkedin

Is Bass Pro An Essential Business Because It...