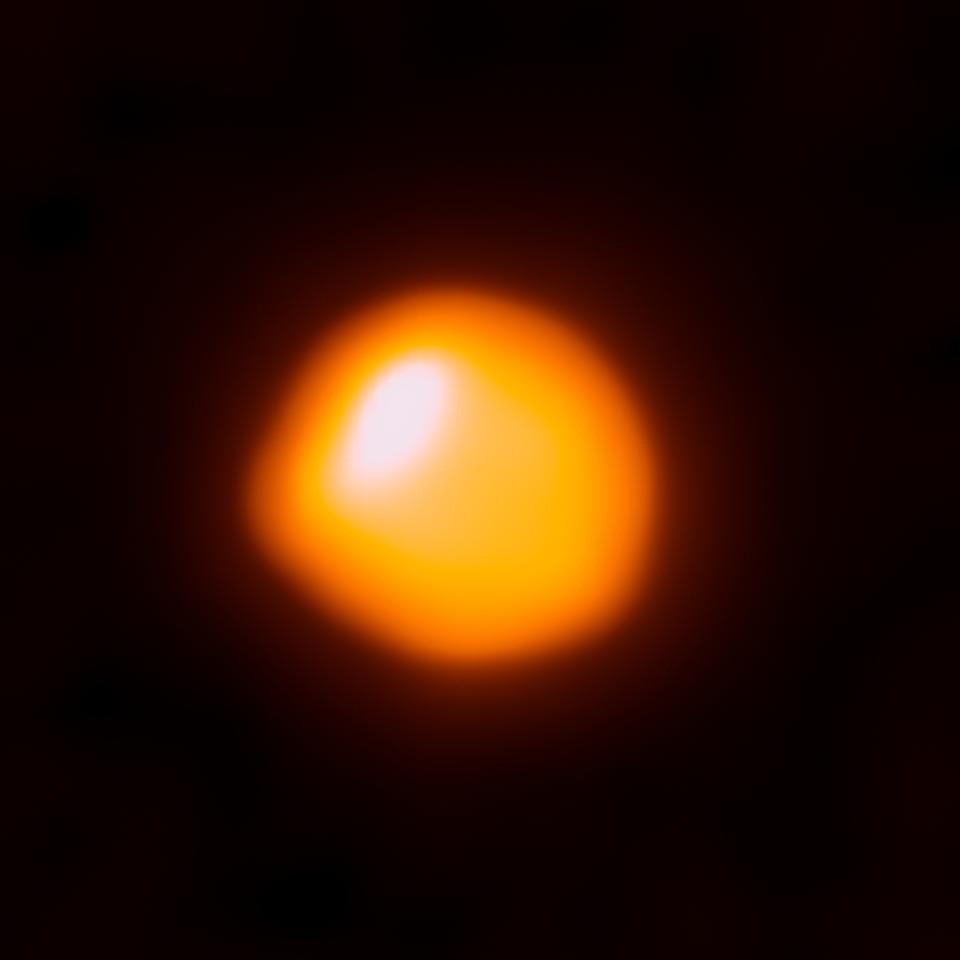 The red supergiant star Betelgeuse appears to have finally stopped its unprecedented dimming, Villanova University astronomer Edward Guinan told me this afternoon. He says that although he’s unsure what has caused its strange brightness fluctuations, Betelgeuse is not likely to undergo a supernova explosion anytime soon.

“The star has been nearly steady in brightness now over the last 10 days,” said Guinan.

We could be at minimum brightness now and very soon the star will slowly brighten if it follows its normal 420 to 430 period of pulsation, says Guinan. Or when the star periodically changes its  brightness, he says. These periodicities are seen in observations of Betelgeuse as far back to the 1930s, says Guinan. But these most recent dips in the star’s brightness have been profound, he says.

“In December the star kept getting fainter than we have ever observed in our 25 years of continuous photometry,” says Guinan.

Betelgeuse is currently at about 36% of its normal brightness, a change noticeable even to the naked eye, the European Southern Observatory (ESO) has noted.

Betelgeuse, located some 722 light years away in the constellation of Orion, has likely been a red supergiant for as long as 100,000 years, says Guinan. Bloated, unstable stars near the end of their lives, he says red supergiants have large convective envelopes that rise and fall with warming and cooling blobs of gas.

Guinan says that some 8 to 9 million years ago —- when it was a normal hydrogen-burning star —- Betelgeuse was very likely a hot, blue star of the O or B spectral type. Although it began its life as a star that may have been as much as 28 times the mass of our Sun, it has lost several solar mass equivalents of mass over its lifetime.

He estimates that it probably has as much of as 18 solar masses left but is currently losing the equivalent of one earth-mass per year.

Although an ESO observing team has posited that the dimming may be a product of the cooling of the star’s surface or the star’s dust ejections along our line of sight, Guinan says he favors that the dimming is caused by astrophysics intrinsic to Betelgeuse itself.

What perplexes Guinan most about this recent dimming?

Why the star became so faint; it’s out of character for Betelgeuse to do this, he says. The big test now is that the star should slowly start to brighten over the next few weeks, he notes.

What would a Betelgeuse supernova look like from Earth?

It may be close to the brightness of a full moon and will be visible in the day, says Guinan.

This initial brightness would last a few months before slowly fading away, he says. But it should leave behind a rapidly expanding nebulous remnant.  He says ejected gas and dust near the star that would “light up” as the exploding supernova shell.  Then Guinan says that it’s likely that the star’s collapsed iron core would end up as a neutron star.

But Betelgeuse is too far away to be of any danger to Earth when it does explode, says Guinan.

As for exactly when Betelgeuse will blow?

There are too many uncertainties in the physical properties of star — such as mass, luminosity and age to make a precise guess, says Guinan. But better distance estimations would help get a better fix on the star’s radius and luminosity, which in turn would help predict a more precise supernova date.

“Like everyone, I would love to see it go supernova,” said Guinan. “But I’m in my seventies and don’t have much time left. Betelgeuse has 100,000 Years.”

A Cautionary Tale About Social Distancing For St....