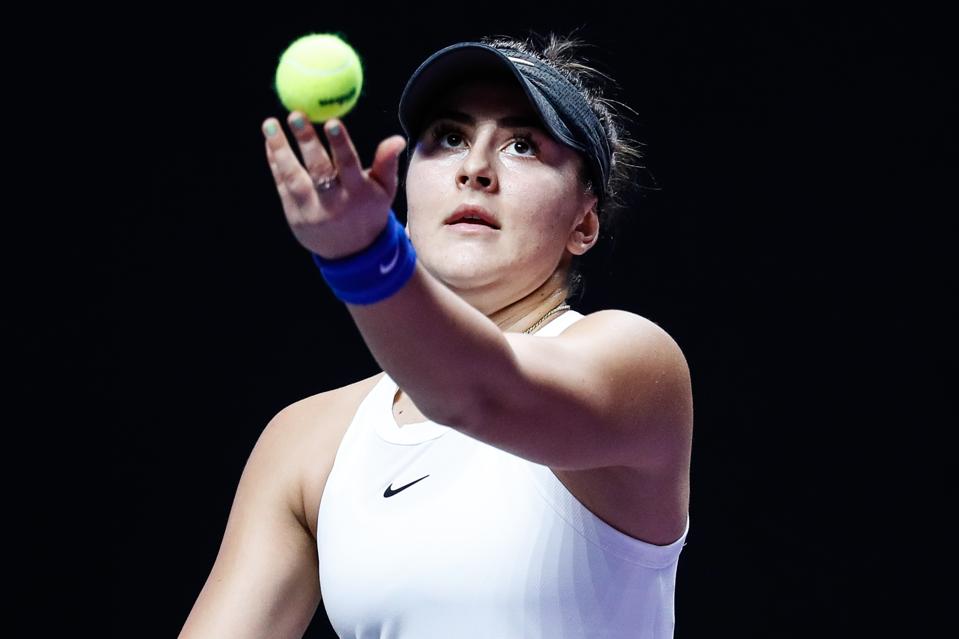 SHENZHEN, CHINA – OCTOBER 30: Bianca Andreescu of Canada serves in the Women’s Singles group match … [+] against Karolina Pliskova of the Czech Republic on Day four of the 2019 WTA Finals at Shenzhen Bay Sports Center on October 30, 2019 in Shenzhen, Guangdong Province of China. (Photo by VCG/VCG via Getty Images)

Bianca Andreescu has been awarded the Lou Marsh Trophy as Canada’s athlete of the year for 2019.

The honor wasn’t never in doubt after the 19-year-old from Mississauga, Ontario, was a unanimous choice among 30 sports journalists.

Andreescu capped a historic season and vaulted onto the world stage by winning the U.S. Open in September. It was the first time in the country’s history that a male or female had won a Grand Slam singles tennis title.

A few weeks earlier, Andreescu became the first Canadian in 50 years to win Rogers Cup, beating the legend Serena Williams in the final when Williams had to retire with an injury. In the rematch in New York, Andreescu won in straight sets, 6-3, 7-5.

Andreescu was the first tennis player ever awarded the trophy, which has been won by the likes of Wayne Gretzky (four-time winner), Bobby Orr and other hockey legends, in addition to Olympic athletes like swimming sensation Penny Oleksiak. Last year’s winner was freestyle skier and Olympic champion Mikael Kingsbury.

“Wow, I’m so thankful for this award,” Andreescu said. “I was not expecting it and to be the first tennis player to win is even more surreal. I can’t wait for what 2020 will bring and am always proud to represent Canada at the highest level.”

Andreescu captured her first WTA title in March, when she stunned the tennis world in Indian Wells, California.

Her three titles and 48-5 win-loss record this season helped her leap from No. 152 to World No. 4 (on October 21) in the WTA rankings and claim her place as the highest ranked women’s player in Canadian tennis history. In doing so, she surpassed Eugenie Bouchard, who had climbed as high as World No. 5 in 2014.

The Lou Marsh Trophy is named for Lou Marsh, a prominent Canadian athlete, referee and former sports editor of the Toronto Star, who died in 1936.

The Canadian Press, the country’s national news wire service, also names a Canadian male and female athlete winner at year end. Two tennis players have won that award. Milos Raonic is a two-time winner (2013, 2014) and Denis Shapovalov won for his achievements in 2017.

Andreescu, who battled shoulder and knee injuries in 2019, has also earned nominations for the WTA’s player of the year and newcomer of the year awards, which will be announced this week.

Andreescu will start 2020 as the second favorite to win the Australian Open in January next to Williams.

The first Grand Slam of 2020 gets under way in Melbourne on Jan. 20, and oddsmakers have installed Williams as the favorite to win her 24th Grand Slam title to tie her with Margaret Court for the most Grand Slams in a singles career for a female.

“It’s extremely tight at the top of this market, with the leading five players priced between 10/1 and 6/1,” Oddschecker spokesman Pete Watt said in a statement. However, Williams is not attracting the most interest among bettors. She accounts for just 5% of the total bets placed, Watt said.

“It is elsewhere that punters are finding the best value, apparently on fourth-favorite and 10/1 shot Simona Halep, who currently dominates the market at 35%,” Watt said.

Six Attributes Investors Look For In Mission-Driven Founders. Why These Also Apply To You As You Build Your Career

Why The Global Economy Needs A Paris-Style Agreement...

The Dallas Mavericks React To The NBA’s Decision...