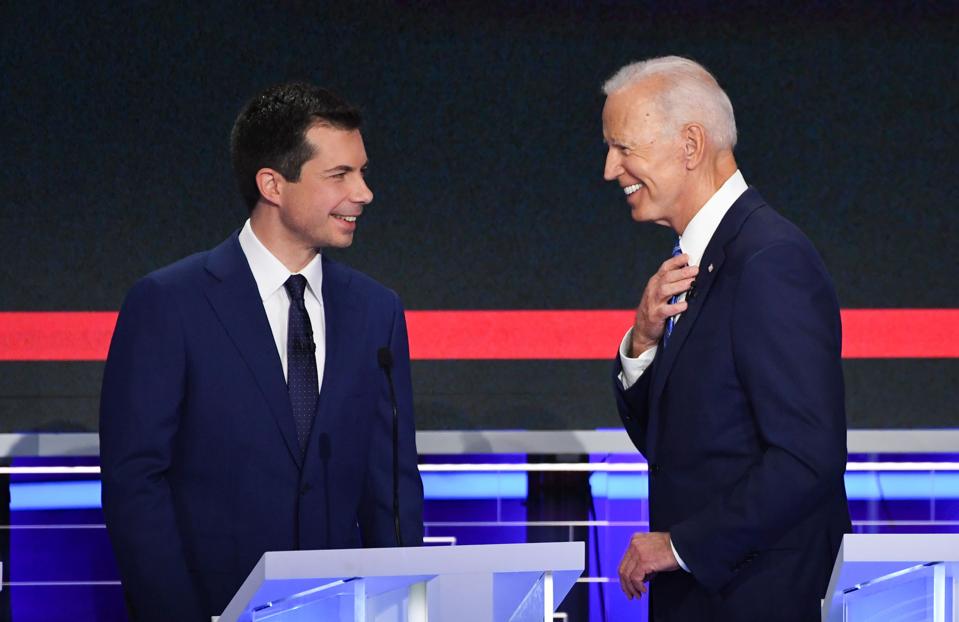 Pete Buttigieg ran an unprecedented presidential campaign, starting the race as a small-town mayor and going on to win the most delegates from the Iowa caucus and effectively tie in the New Hampshire primary. Buttigieg was both the first openly gay and first millennial candidate to win either of these contests. Perhaps informed by his age, Buttigieg campaigned on an economic agenda that would position the United States for long-term prosperity. For his supporters now looking to support one of the remaining candidates, which offers the most similar vision?

Of the leading Democrats running for president, Buttigieg had a unique appreciation for the long-term challenges facing the country. He more than anyone else sought to hold the Trump administration accountable for plunging the federal government into trillion-dollar deficits as far as the eye could see, and made a compelling case for why Democrats should seize the mantle of fiscal responsibility abdicated by Washington Republicans in the age of Trump.

“As we speak, we have a Republican presidency cheering a scenario where we’ve got a trillion-dollar deficit,” said Buttigieg in a December interview. “But I find that our party doesn’t talk about it much. And in some corners of our party, it’s not fashionable to care about it. I think that we need to, first of all, because just generationally, I think that I may be here when some of these fiscal time bombs go off. I also think that we need to recognize that we’re approaching a point where you can’t ignore spending we need to do on infrastructure and safety net and health and education being crowded by debt service.”

Unlike many other politicians, Buttigieg’s future-focused policy promises backed up his fiscally responsible rhetoric. An analysis of candidate proposals by the Progressive Policy Institute found that Buttigieg’s tax plan would raise as much new revenue as he proposed in new spending, making him the only leading presidential candidate to propose a complete plan for funding the entirety of his agenda. Not only would Buttigieg avoid burying our generation in debt, but almost half of his new spending was committed to critical public investments in education, infrastructure, and scientific research that lay the foundation for long-term economic growth.

For fans of the Buttigieg agenda, there is still a candidate in the race who offers a similar vision: Vice President Joe Biden. Although many young voters are flocking to Sen. Bernie Sanders, Biden is the only candidate left with a sustainable vision for prioritizing investments in their future. Like Buttigieg, Biden also commits more than half of his new spending proposals to long-term public investments in future generations.

While Biden’s revenue proposals fall short of funding the entirety of his agenda, they would at least cover the costs of his proposed non-investment spending increases, ensuring that any new debt accumulated on the backs of young Americans is used to invest in their future. Of course, the campaign is ongoing, and Biden could further close the gap between his revenue and spending proposals by endorsing any number of good deficit-reducing policies championed by Buttigieg, such as a cap on out-of-network health-care prices.

The same cannot be said of Biden’s remaining rivals. Sanders has proposed increasing federal spending by more than $53 trillion over the next decade, $25 trillion of which is unpaid-for. As Buttigieg noted in the Nevada presidential debate, this deficit is greater than the total value of all goods and services produced by the U.S. economy in a single year. After embracing every tax increase on wealthy Americans imaginable, there is simply no way to finance the Sanders agenda without putting an enormous economic burden on the backs of millennial workers.

Unlike Biden and Buttigieg, Sanders and Warren are focusing the majority of their new spending on present consumption instead of long-term investment. For example, both propose costly expansions of Social Security benefits for even the wealthiest seniors and pass the costs on to young Americans. Even if one believes that it is reasonable to borrow money for public investments in combating climate change and rebuilding America’s infrastructure, the revenues proposed by Sanders and Warren would be insufficient to cover even their non-investment spending proposals. (Mayor Michael Bloomberg has yet to publish enough detail on his proposals for PPI to fairly compare them with those of the other leading candidates.)

Although Buttigieg’s 2020 presidential campaign has come to an end, his future remains bright and his supporters will no doubt have the opportunity to vote for him in another election cycle. For those who still want to support his vision in 2020, there is only one candidate remaining in the race offering anything close.

Amazon Gives A Boost To Merchants Who Fulfill...

How To Operationalize Innovation

5 Takeaways From Gardner Minshew And The Jaguars’...

A Holiday Poem For All Those Companies That...