Biggest Keys For The San Francisco 49ers This Offseason 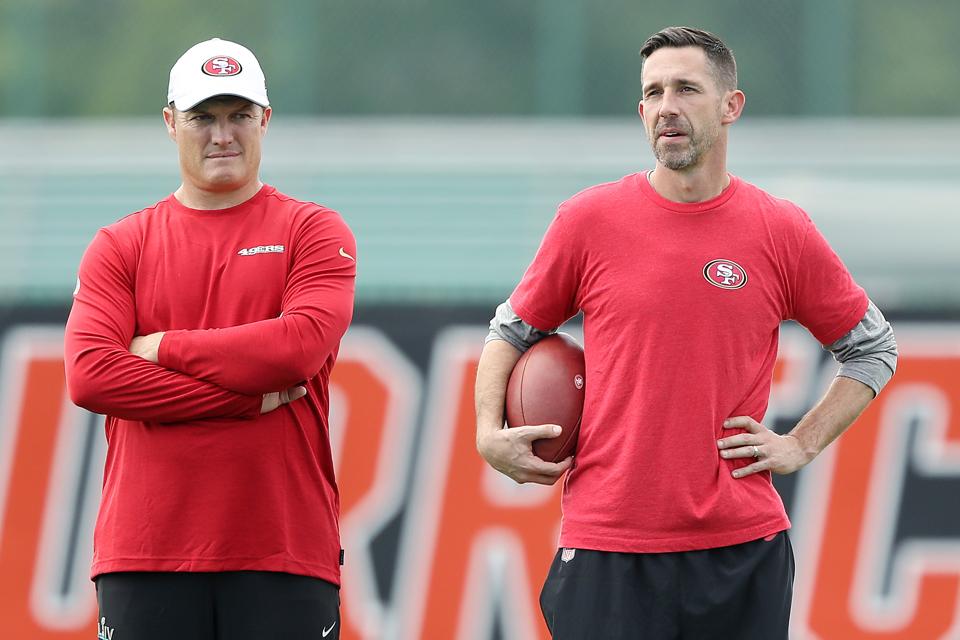 San Francisco 49ers General manager John Lynch and head coach Kyle Shanahan have a lot of work to do … [+] this offseason. (Photo by Michael Reaves/Getty Images)

The San Francisco 49ers are coming off one of their most successful seasons of the past quarter century.

Prior to a meltdown at the end of Super Bowl LIV against the Kansas City Chiefs, it sure looked like this team was going to hoist the Lombardi. San Francisco was up 10 with just over six minutes remaining. 49ers fans don’t have to be reminded of what happened next.

With NFL free agency about to start in a month-plus, San Francisco now has a lot of work to do. I previously focused on wide-ranging stories for the 49ers heading into March. Here, I take a look at the biggest keys for head coach Kyle Shanahan, general manager John Lynch and Co. 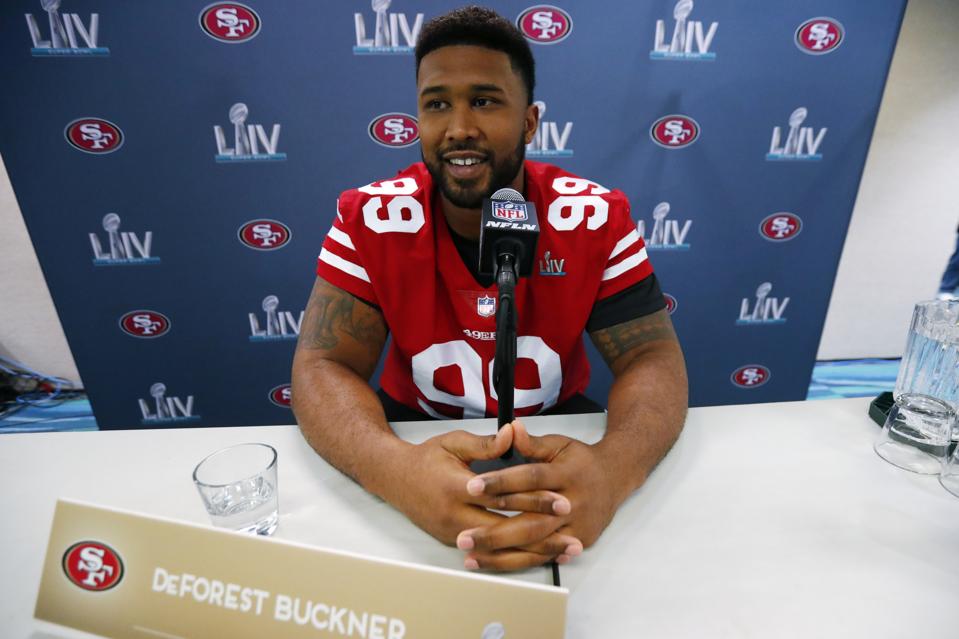 Signing DeForest Buckner to an extension is a priority, both for the short term and the long term. … [+] (AP Photo/Wilfredo Lee)

San Francisco is currently an estimated $19.63 million under the cap. The team will likely release Marquise Goodwin and Jerick McKinnon, saving another $7.7 million against the cap. It also wouldn’t be a huge surprise if quarterback Jimmy Garoppolo restructured his contract, bringing down his cap hit from $26.6 million in a considerable manner.

Even then, other things must be done on this front for the 49ers to both retain their core free agents and upgrade what remains a talented roster. That’s where Lynch and cap guru Paraag Marathe come into play.

Buckner, 25, is set to count $14.36 million against the cap in 2020 after the 49ers picked up the option for the final year of his rookie contract. With a likely average annual salary of $17-plus million, taking into account the recent defensive tackle market, signing Buckner to a long-term deal will not be a cheap proposition.

In no way does this mean San Francisco should push the issue down the road. No one needs Buckner entering 2020 with this contract issue hanging over his head. The former first-round pick has been downright dominant in recent seasons, racking up 34 quarterback hits and 19.5 sacks since the start of the 2018 campaign.

Locking Buckner up would also lower his 2020 cap number considerably. As an example, two-time Defensive Player of the Year Aaron Donald of the Los Angeles Rams is earning $22.5 million annually on his current deal. He counted just $17.11 million against the cap in the first year of said deal. A new contract for Buckner could save San Francisco $4-plus million against the 2020 cap. 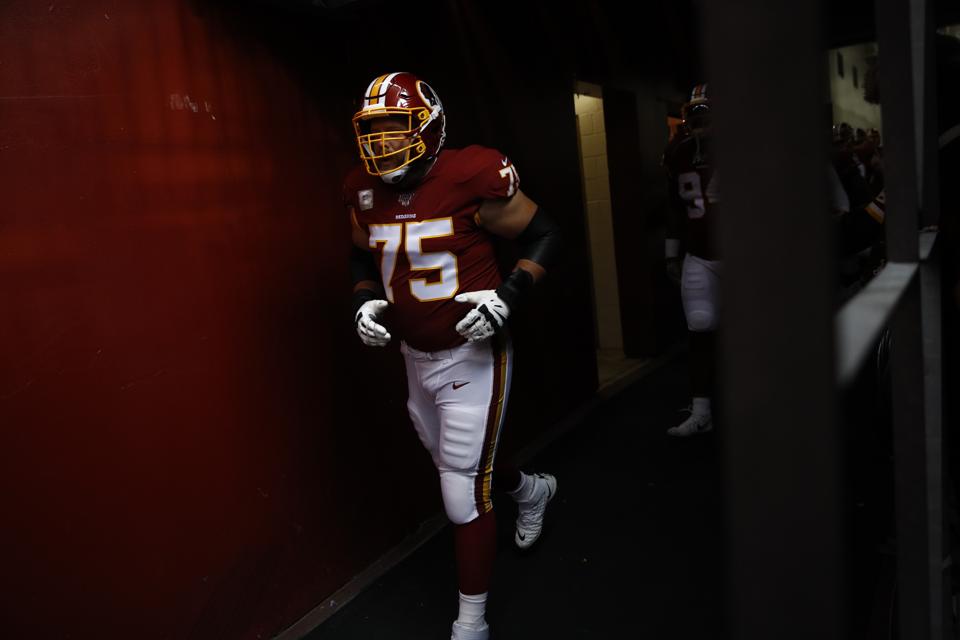 The 49ers took care of some business prior to the 2019 season coming to a conclusion, restructuring the contract of injured center Weston Richburg. Together with guards Laken Tomlinson and Mike Person, the interior of San Francisco’s offensive line has improved a great deal.

In no way does this mean Lynch and Co. shouldn’t go out there with the limited resources they have to find an upgrade. Assuming for a second San Francisco views Tomlinson as a long-term option, Person becomes the expendable option here.

The guard is set to count just $2.5 million against the cap in 2020, which is a solid value for a backup interior lineman. Whether it’s targeting someone like Michigan’s Cesar Ruiz or Georgia’s Solomon Kindley in Round 1 of the 2020 NFL Draft, that becomes a real avenue to pursue.

Less likely, Pro Bowlers such as Brandon Scherff and Andrus Peat are set to hit the open market. Each one of these veterans will likely come in at $11-plus million annually. Is that a figure the cap-strapped 49ers can offer? I’m not too sure. If it is, they should pounce in short order. 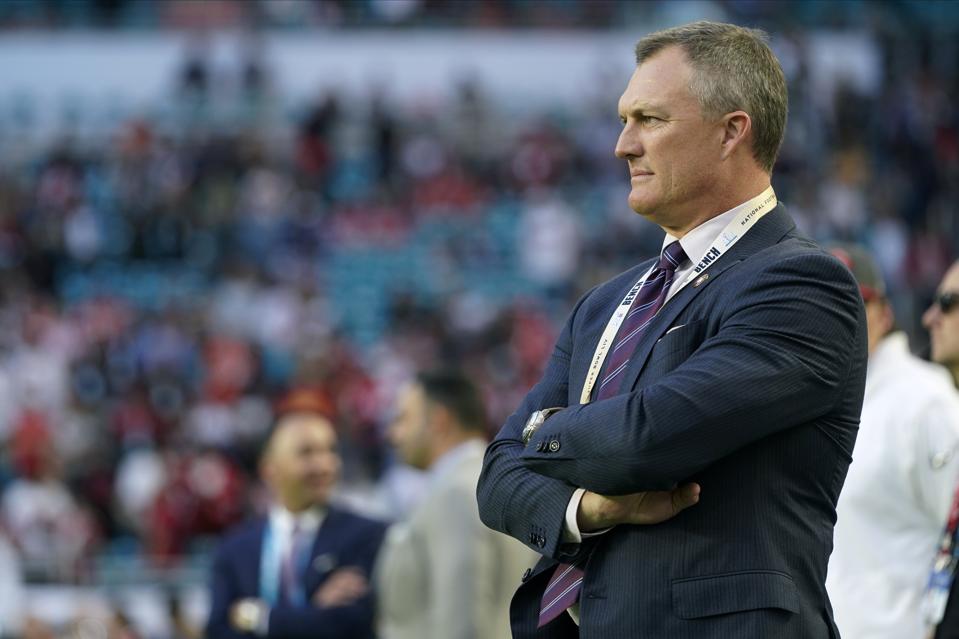 General manager John Lynch must be on the phone in an attempt to trade down in the 2020 NFL Draft. … [+] (AP Photo/David J. Phillip)

San Francisco went from 4-12 in 2018 to 13-3 this past season. That’s a clear indication the team has a ton of young talent. But in order for this success to be sustainable moving forward, acquiring young and cheap talent through the draft is paramount.

By virtue of the Dee Ford and Emmanuel Sanders’ trades of the past calendar year, the 49ers head into the 2020 NFL Draft with just six selections. That includes only their first rounder (31st overall) in the first four rounds.

A trade down from that 31st selection makes a lot of sense. It remains a valuable pick for teams looking to guarantee a fifth-year player option (see: DeForest Buckner) or looking to trade up for a quarterback. San Francisco could move into the second round and acquire a few valuable mid-round selections in the process.

Given the 49ers’ success, the trade market also becomes a viable option to acquire picks. Quarterback Nick Mullens is slated to become an exclusive-rights free agent. Running back Matt Breida will be a restricted free agent. Signing them long term, only to ultimately trade the two, makes sense. Mullens didn’t see action outside of garbage time this past season after excelling back in 2018. Breida found himself in Kyle Shanahan’s doghouse following issues holding on to the ball. Though, he is averaging a robust 5.2 yards per run over the past two seasons.

There’s also impending free-agent defensive tackle Arik Armstead, who led San Francisco in sacks with 10 last season. The 49ers will look to lock Armstead up to a long-term deal ahead of free agency next month. That seems unlikely given his market value of $10-plus million. Another option is placing the tag on Armstead with the hopes of finding a trade partner. Dee Ford’s situation with the Kansas City Chiefs last spring was a prime example of this. 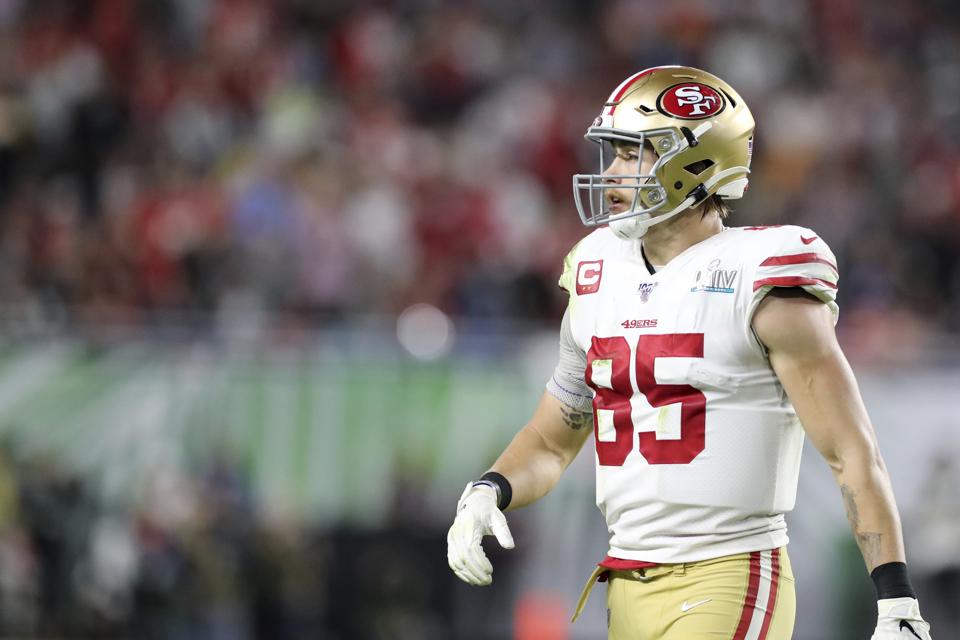 Signing George Kittle to a record-breaking extension should be in the cards here soon. (AP … [+] Photo/Gregory Payan)

It was noted immediately prior to the Super Bowl that San Francisco was looking to lock Kittle up on a long-term deal that would set a new record for a tight end. Said deal is expected to be valued at $13-plus million annually. Despite putting up pedestrian numbers during the playoffs, this record-breaking tight end is more than worth the money.

Kittle just surpassed Hall of Famer Mike Ditka for the most receiving yards for a tight end in his first three NFL seasons. He’s a dynamic receiving threat and already the best blocking tight end in the game. Lock this dude up to a long-term deal and don’t think twice about it. 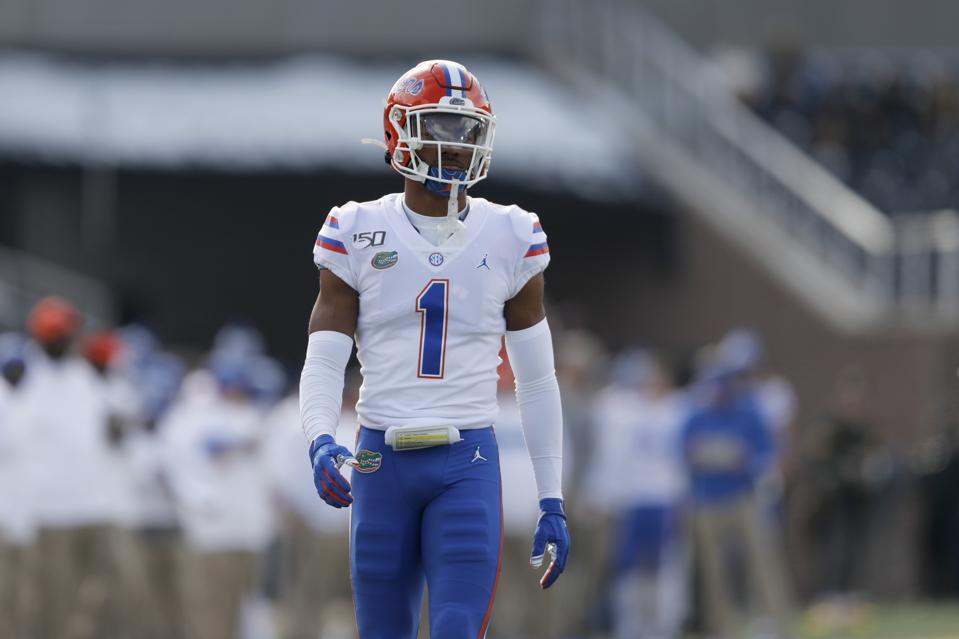 Ahkello Witherspoon was benched in favor of Emmanuel Moseley early in the playoffs after getting torched by the Minnesota Vikings in the NFC Divisional round. While Moseley played pretty well in his stead, it’s high time for the 49ers to exhaust an early-round pick on a cornerback.

That’s only magnified with Richard Sherman advancing in age and entering the final year of his contract. If San Francisco does stay at 31, expect this team to go corner. Florida’s C.J. Henderson, Alabama’s Trevon Diggs and A.J. Terrell from Clemson are all options here.

Add To The Wide Receiver Group 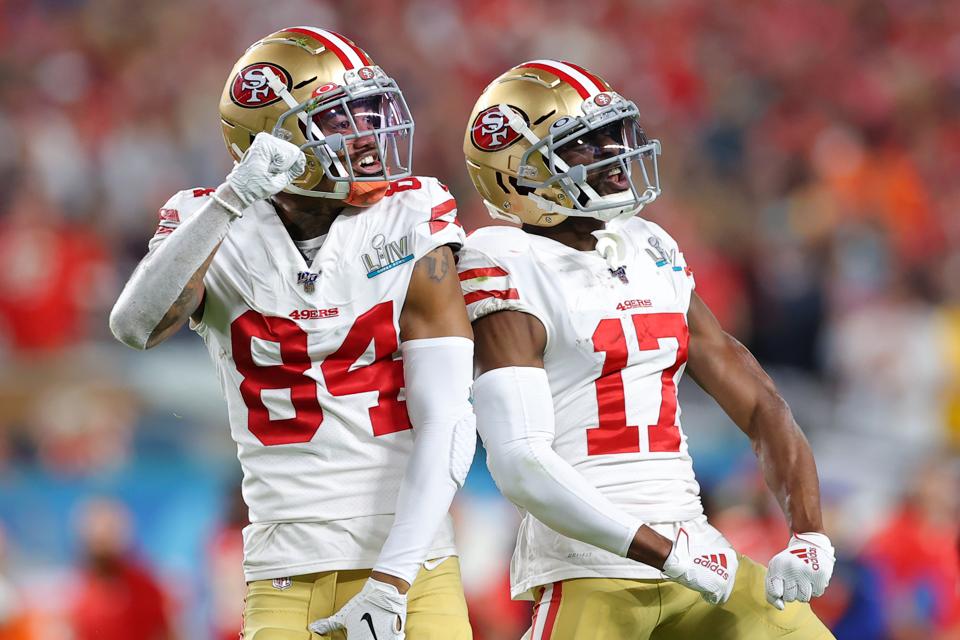 The San Francisco 49ers must retain Emmanuel Sanders and also add another receiver to the mix. … [+] (Photo by Kevin C. Cox/Getty Images)

Of those who were on the field, Dante Pettis took a major step back as a sophomore while Kendrick Bourne proved himself to be inconsistent.

This is a clear indication that the 49ers must not only find a way to re-sign Sanders, but have to add to this receiver group in the offseason.

There’s not a whole lot of options when it comes to free agency, especially when taking into account the 49ers’ cap situation. If they do lock Sanders up, it will likely come with a $10-plus million annual salary. That handcuffs the 49ers to an extent, as does their lack of draft picks. This is one of the primary reasons that trading down in the draft makes a lot of sense.

Of the potential free agents, three come to mind. Veteran A.J. Green missed all of last season with the Bengals due to an ankle injury. Already past his prime, could the future Hall of Famer meet a market that’s favorable to the 49ers? Veteran slot guys Randall Cobb and Nelson Agholor could also be options.

Either way, retaining Sanders and adding a viable depth option is key for San Francisco this offseason.

How To Manage Customer Input In Product Development

Why Issa Rae Embraces Being A Multi-Hyphenate Artist...

In The Running – Building A Global Business...