Breaking
Time For IMF Climate Coin (1/3)
Why Getting On TV Is Your Best Marketing...
Ask Larry: Can I Take My Social Security’s...
Students Can Get Hulu For Just $1.99 Per...
Documentary Calls Out Stereotypes, Issues Urgent Call-To-Action For...
The Best Preferred Stocks For 2021
China’s Rare Earths ‘Slump’ A Sign Of Domestic...
5 Ways To Promote Team Wellness This Winter
How To Refresh Your Business Ideas In The...
Yelp Is Now Accepting Covid-19 Safety Reviews …And...
What You Should Consider Before Entering An Intrafamily...
The Hidden Drag From The S&P 500 That...
The Flawed Inflation Narrative; And “V” vs. “U”
How, When And Where You Can See A...
Why You Should Stop Using Your Facebook Messenger...
IRS Collections Appears To Be Broken
Home Finance Bill Nygren Sells 2 Energy Stocks In 4th Quarter
Finance

To achieve long-term capital appreciation, the guru, who also manages the Chicago-based firm’s Select and Global Select funds, usually invests in mid- and large-cap companies. When picking stocks, he looks for growing companies that have shareholder-oriented management teams. According to the fund’s fact sheet, he prefers to take a position when the stock is trading at a substantial discount to his estimate of intrinsic value, then waits for the gap between the two to close before selling.

With these criteria in mind, Nygren divested of the fund’s holdings of energy giants Halliburton Co. (NYSE:HAL) and Chesapeake Energy Corp. (NYSE:CHK) during the quarter.

In his fourth-quarter letter to shareholders, Nygren emphasized that these sales “do not reflect a change in our view of the energy sector’s overall attractiveness,” but were executed to “recognize a tax loss and deploy the proceeds” into more attractive opportunities within the same industry.

“The energy sector has significantly underperformed the price of oil over the past several years,” he wrote. “Since early 2016, the price of oil has risen over 100%, while the returns from the S&P Oil & Gas Exploration and Production ETF (XOP) have dropped. Yet demand for oil has continued to grow and we expect a more balanced global supply outlook. Therefore, we believe that attractive opportunities remain in this out-of-favor industry.”

The investor also said that while the fund did not establish any new positions during the quarter, it did swap a portion of its non-voting Alphabet Class C (NASDAQ:GOOG) shares for voting Class A shares (NASDAQ:GOOGL) since they were “offered at a slight discount to the non-voting shares.”

“We believe that the voting rights afforded to the Class A shares should trade at a modest premium to the non-voting C shares—not a discount,” Nygren added. “We were happy to express this view by performing a like-kind exchange that didn’t trigger a taxable event.”

The investor dumped all 5.8 million shares of Halliburtion, impacting the equity portfolio by -0.71%. The stock traded for an average price of $21.18 per share during the quarter.

GuruFocus estimates the fund has lost 2.14% on the investment since establishing it in the fourth quarter of 2018.

The Houston-based oilfield services company has a market cap of $14.13 billion; its shares were trading around $15.79 on Wednesday with a forward price-earnings ratio of 11.43, a price-book ratio of 1.76 and a price-sales ratio of 0.62.

The median price-sales chart shows the stock is trading below its historical average, suggesting it is undervalued. The GuruFocus valuation rank of 9 out of 10 also supports the assessment as the share price and price ratios are near 10-year lows. 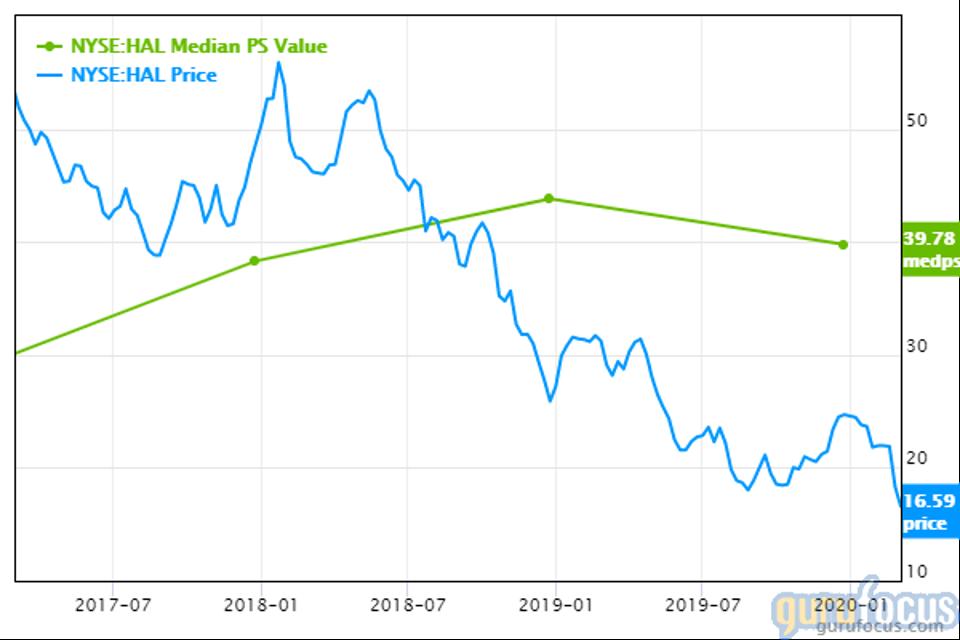 Weighed down by debt and low interest coverage, GuruFocus rated Halliburton’s financial strength 5 out of 10. The Altman Z-Score of 2.26 also indicates the company is under some financial pressure.

The company’s profitability scored a 6 out of 10 rating on the back of declining margins and returns that underperform over half of its competitors. Halliburton also has a low Piotroski F-Score of 2, which suggests operating conditions are in poor shape. The business predictability rank of three out of five stars is on watch as a result of a decline in revenue per share over the past five years. According to GuruFocus, companies with this rank typically see their stocks gain an average of 8.2% per annum over a 10-year period.

Nygren sold all 59.9 million shares of Chesapeake Energy, which had an impact of -0.55% on the equity portfolio. Shares traded for an average price of 99 cents each during the quarter.

Based on GuruFocus data, the fund lost approximately 71% on the investment since establishing it in the first quarter of 2017.

The oil and gas producer, which is headquartered in Oklahoma City, has a $494.51 million market cap; its shares were trading around 26 cents on Wednesday with a price-book ratio of 0.18 and a price-sales ratio of 0.05, which GuruFocus noted were all near 10-year lows.

According to the median price-sales chart, the stock is undervalued. 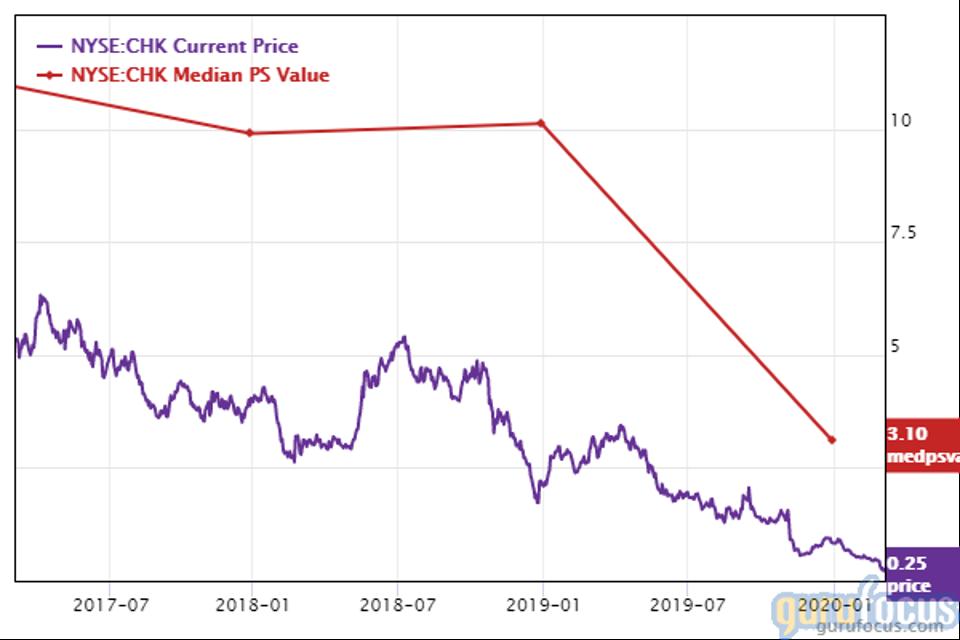 Chesapeake’s financial strength was rated 3 out of 10 by GuruFocus as its equity-asset ratio, debt-equity and debt-Ebitda ratios underperform a majority of companies in the oil and gas industry. The Altman Z-Score of -0.76 also warns the company is in financial distress and could be at risk of going bankrupt.

Although the margins and returns are negative and underperform a majority of industry peers, the company’s profitability fared a bit better, scoring a 5 out of 10 rating. Chesapeake also has a low Piotroski F-Score of 3 and its one-star business predictability rank is on watch as a result of declining revenue per share over the past five years. GuruFocus says companies with this rank typically see their stocks gain an average of 1.1% per year.

Oakmark’s $16.14 billion equity portfolio, which is composed of 51 stocks, is largely invested in the financial services sector with a weight of 33.04%, followed by smaller positions in the communication services (14.96%) and consumer cyclical (14.16%) spaces. Energy stocks represent 5.72% of the portfolio. 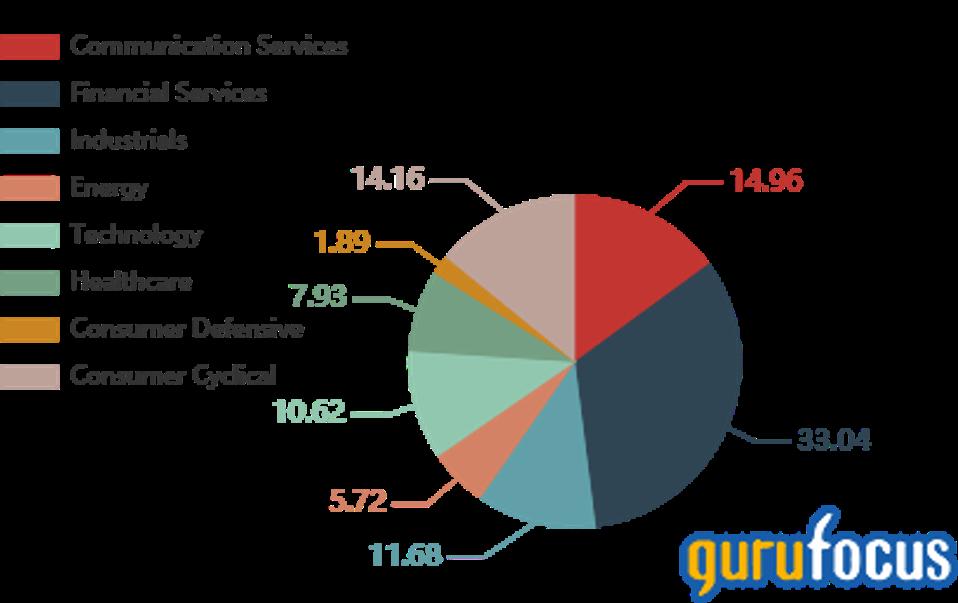 Nygren said in his fourth-quarter market commentary that the Oakmark Fund returned 27% in 2019, slightly underperforming the S&P 500’s return of 31.49%.