Breaking
How To Get Your Startup Business Off The...
How To Create A COVID Safe Construction Site
How to Make a Good First Impression at...
Covid-19 Death Toll In U.S. Passes 200,000
5 Decisions That Will Increase Your Chances Of...
Coronavirus Is Shaping Up To Be Very Bad...
Is It Time For A Bank For Women?
As Israel Locks Down, Its Health Tech Sector...
Buying The Bulge Is Dangerous
5 Strange Things Happening Right Now In The...
The Best Blogging Platforms (In-Depth Review)
How Will The Coronavirus Impact Your Finances?
How Xbox Series X Will Attempt To Avoid...
Virgin Orbit Seeking Over $100 Million As ‘Jaw...
How To Develop The Confidence To Launch A...
USPS Covid-19 Coronavirus Plan To Send Every Household...
Android Circuit: Mysterious Samsung Galaxy, Google’s Next Pixel...
Snowflake: Valuable Lessons For Entrepreneurs
After Man Shoots Fiancee’s Parents, Bloody Footprints Lead...
Home Finance Bitcoin Dark Web Activity Up 340% Since 2017: Report
Finance

The total value of bitcoin transacted on the dark web is up 65% over the year, and 340% over three years, according to a report from Bitcoin technology company Bitfury.

Per data scraped by Bitfury’s Crystal blockchain analytics platform, in Q1 of 2019, dark net vendors raked in a cumulative $240 million in bitcoin—up from $87 million in Q1 of 2017. This figure has leapt higher still in 2020, to $384 million. Even so, as dark net markets continue to gobble up coins despite routine routs by law enforcement, their users’ appetite for bitcoin has (slightly) subsided.

Dark net vendors received 47,000 bitcoin in Q1 of 2020, a 25% reduction from the same bitcoin inflows this time last year. Buyers are defaulting to other cryptocurrencies, so-called altcoins such as monero and litecoin, perhaps in a bid to avoid to escape the purview of the exact blockchain analytics that Bitfury is running.

“These drops in bitcoin received and sent could be due to the growing popularity of altcoin usage by darknet entities,” the report reads. Even so, the total value transacted is rising because Bitcoin’s price is on the up.

Bitfury’s report focuses specifically on Bitcoin, though Crystal can monitor “Bitcoin Cash, Litecoin, Ethereum (with all ERC-20 and ERC-721 tokens), and Tether,” according to Marina Khaustova, CEO of Crystal Blockchain, “but not Monero,” she added. The report includes no figures for altcoin use, though future reports will, Khaustova said over email. 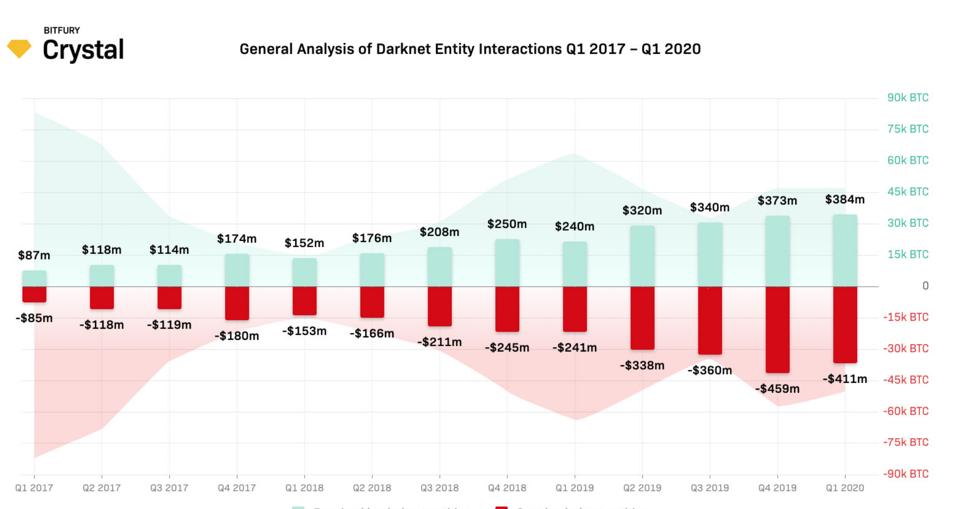 Value transacted on dark net markets, according to Bitfury.

Even as Bitcoin loses some share to altcoins, it’s still the dominate currency on the dark web.

And according to Bitfury’s data, the majority of people are sending this bitcoin straight from exchanges with no KYC requirements when checking out. So far in 2020, 45% of bitcoin sent to the dark net has come from a KYC-free exchange account; this is down 30% from 2017, while payments from KYC exchanges, interestingly, have changed from 14% to 29% over the same time frame. Only 1% of inflows have come from mixing services in 2020.

Funds sent between markets are also on the uptick, something the report says “indicate[s] that darknet users are trying to hide their bitcoin flow inside of the darknet itself, avoiding the risk of having their activities unveiled by entities (like exchanges) that have implemented FATF requirements.” (Most all dark net markets include built-in wallets for user accounts).

Breakdown of where bitcoin is coming from before it’s sent to the dark net.

Once these vendors get the Bitcoin, they are increasingly likely to send them to a mixer or to another market. In Q1 2020, mixers ate 20% of all outflows from dark net markets, while 16% of outflows were just recycled to another market. 46% were sent to no-KYC exchanges, down from 76% in Q1 of 2017.

Bitfury goes on to note that the total value of bitcoin sent to and received from KYC exchanges more than doubled from $36 million in Q1 of 2019 to $73 million in Q1 of 2020. On the other side of the coin, they have seen a surge in activity with mixers, which are meant to obscure a coin’s footprint on the blockchain. $67 million worth of bitcoin was sent to mixers in Q1 of 2020, a drastic increase from the low millions in quarterly activity typical of mixers since 2017.

When asked if Bitfury’s Crystal could track CoinJoin transactions—a much more sophisticated type of mixing—Khaustova said that they “have been able to untangle mixer transactions like CoinJoin under certain conditions,” though this is not always the case.

The most private methods, then, would be monero and bitcoin that is CoinJoined properly—adding these figures (and payments in other altcoins besides monero) would add unknown millions to the hundreds of millions that circulate through the dark net every few months.