Halving day 2020 arrives amid “The Great Lockdown,” as the IMF calls the coronavirus response, warning it could lead to the worst economic downturn since the Great Depression.

Could halving day 2020, and the uncertain economic environment, spawn the perfect storm to increase awareness and adoption around Bitcoin?

“If the Bitcoin network continues to grow in strength and the price continues its upward trend after the halving, it could be a huge signal to the general public that Bitcoin and blockchain are not one-off trends; they’re long term, cyclical phenomena,” said Muneeb Ali, founder and CEO of Blockstack, a decentralized computing network and app ecosystem. “Bitcoin was born during an economic crisis, and it is fitting that it’s about to have its most visible test before the general public, during a similar, if not more dangerous financial calamity.”

Bank of America Securities predicts The Federal Reserve will print between $8-$10 trillion to steady the U.S. economy, which has already lost more than 30 million jobs.

“It has never been a more fitting time to let people genuinely ponder the benefits of Bitcoin,” says Ali.“While Bitcoin halves, average citizens, especially in western societies, are being forced to consider the question, ‘What is money?’As governments are artificially propping up the stock market to save people’s pensions and checks for every household are being printed out of thin air, the illusion of sound money is being laid bare for the world to see.”

Ali notes how this halving day holds significance beyond the coronavirus backdrop. Bitcoin use cases have evolved since the last halving, too. “You have smart contract platforms that are relying on the Bitcoin network for security purposes,” said Ali, whose Blockstack uses a consensus mechanism dubbed Proof of Transfer, which is reliant on the continued strength of the Bitcoin network.“If Bitcoin’s network strength continues after the halving, I anticipate more and more projects will begin anchoring themselves to the Bitcoin blockchain as its durability becomes more undeniable.”

A resilient Bitcoin network post-halving could also increase the rate at which Proof of Work (PoW) mining consolidates around Bitcoin, says Ali. “As the Bitcoin network continues to grow in hash power, and alternative options are made available, like Proof of Transfer or Proof of Stake, native Proof of Work mining will make less and less sense,” he said. “There was a time–– from 2011-2016 or so––when new PoW based projects could even attempt taking a crack at Bitcoin’s dominance. This is no longer the case.” If it emerges stronger post-halving, Bitcoin’s position could further strengthen, he says. 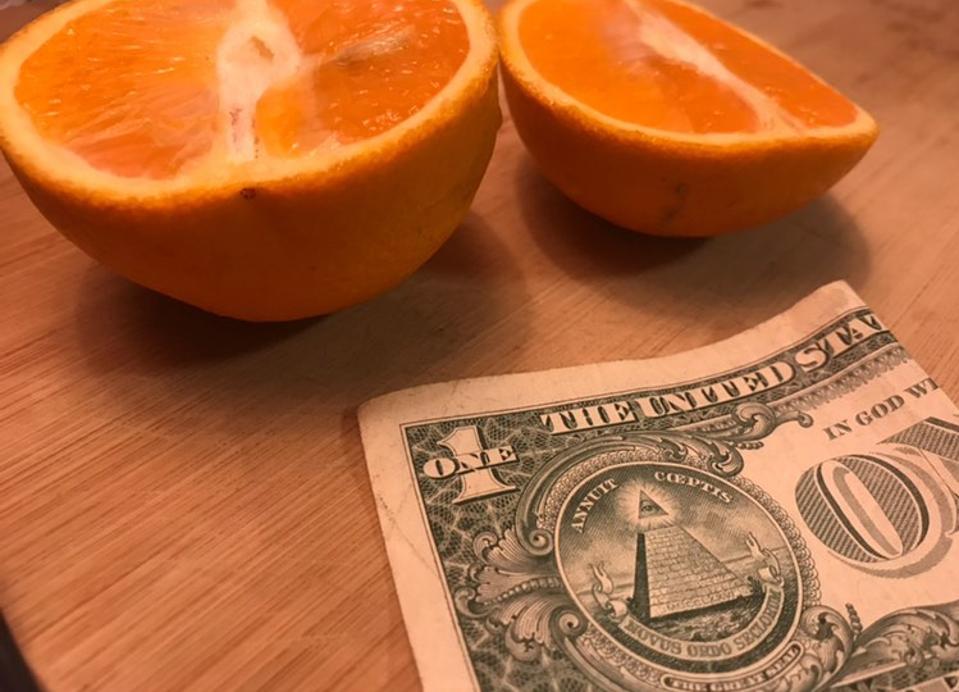 An orange split in half, and the US Dollar.

“The area that is less explored is how a stable PoW reserve cryptocurrency like Bitcoin can enable further innovation so new projects don’t need to reinvent the wheel and can simply re-use the security of Bitcoin,” said Ali.

Hong Fang, CEO of digital asset trading platform OKCoin, sees this halving as different from last halvings due to the coronavirus pandemic and related economic downturn, as well.  “The supply change itself is telegraphed, but this time with investors looking for an alternative asset to the stock and fixed income markets, coupled with the major increase in attention on cryptos since 2016’s event, it will be by far the highest profile halving event,” he said. “The long-standing pro-BTC discussions around hard money are increasingly relevant right now.”

Rob Odell, Chief Product Officer of Blockchain-Backed loan platform SALT, sees halving day 2020 as significant for two reasons. For starters, with the time between each halving event, the awareness and adoption of bitcoin grows significantly.

“This [halving] is no different,” he said. “The evidence of this wider adoption can be seen all over the place from livestream events to the number of wallets that hold BTC to the explosive growth of platforms like Coinbase. In the current economic landscape we’re experiencing as a result of the global response to the COVID-19 crisis, we’re seeing fiat currencies inflate at rapid rates as governments print more money in an attempt to manage the economic fallout caused by the pandemic.”

Odell says this is exactly the type of manipulation Satoshi was aiming to prevent in the creation of Bitcoin, and why these halving events are built into bitcoin’s codebase and monetary policy.

“Bitcoin is deflationary by design and recent events are magnifying the attention to that,” he said.

Why You Should Lead With Love, Not Fear