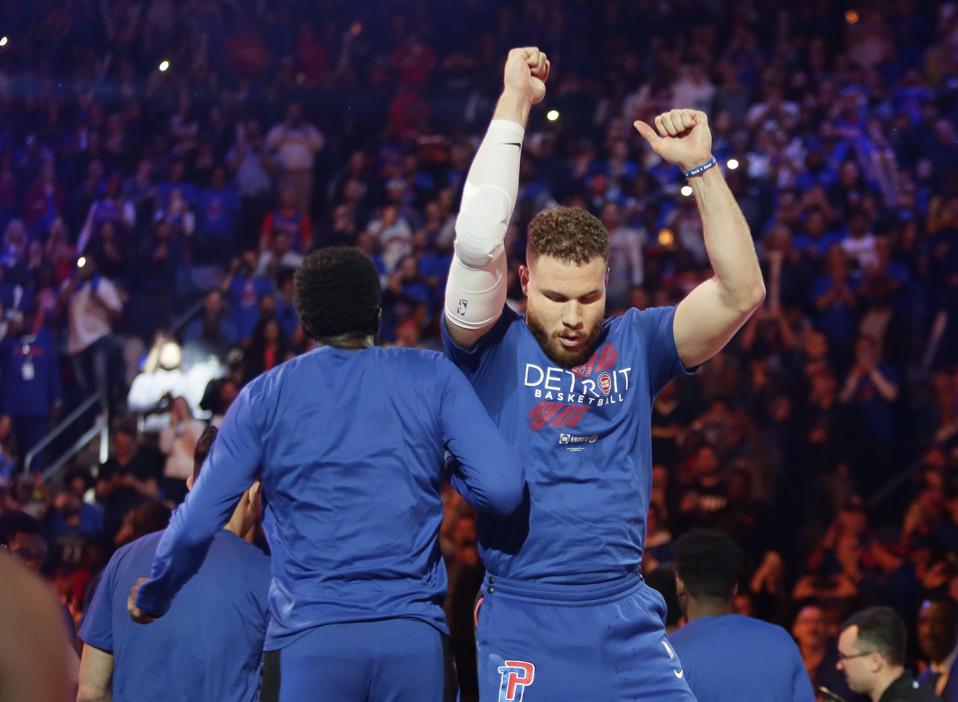 DETROIT, MI – APRIL 20: Blake Griffin #23 of the Detroit Pistons is greeted by Reggie Jackson #1 of … [+] the Detroit Pistons during their introduction for Game Three of the first round of the 2019 NBA Eastern Conference Playoffs against the Milwaukee Bucks at Little Caesars Arena on April 20, 2019 in Detroit, Michigan. NOTE TO USER: User expressly acknowledges and agrees that, by downloading and or using this photograph, User is consenting to the terms and conditions of the Getty Images License Agreement. (Photo by Duane Burleson/Getty Images)

Blake Griffin had his healthiest season in ages last year. He appeared in 75 games, his highest total since 2013-14, and was the single-biggest reason the Detroit Pistons made the playoffs. While he limped to the finish line and ended up missing the end of the regular season and the first two games of the playoffs, just getting to that point was a massive credit to one of the best seasons of his entire career.

Of course, he was limping literally and figuratively with a left knee injury that required surgery after the Pistons were eliminated from the playoffs. It’s greatly concerning that soreness in that same surgically-repaired knee forced him to miss the second half of a 115-107 win over the Houston Rockets, and he’s questionable for Monday’s game against the Washington Wizards.

Watching Griffin play, it’s been reasonable to assume he’s nowhere close to 100% for a while. He show flashes of that athleticism he’s know for, but his ability to explode and elevate is all but gone.

Griffin hasn’t been able to do much to counter this vanished physical ability and he’s quickly become a negative on offense (and he’s not an exceptional defender by any means at the best of times).

In the last seven games, including a two-game stretch where the Pistons blew out the San Antonio Spurs by 34 points and the Cleveland Cavaliers by 33 points, Griffin is shooting 29.7% from the floor on 13 shots per game, and 29.3% from the 3-point line on an average of 5.9 attempts. His usage is 26.7% over that stretch and only Derrick Rose has a higher rate.

Unable to get to the rim as reliably as he’s accustomed to, especially recently, he’s had to rely on that woefully ineffective 3-point shot. 42.9% of his field goal attempts have been 3-pointers, by far a career-high.

It doesn’t feel like that long ago that we were talking much the same way about Reggie Jackson.

In the 2015-16 season, Jackson led the Pistons to their first playoff appearance in almost a decade as their clear best player. He was the captain of the ship and his pick-and-roll chemistry with Andre Drummond seemed like the building block then-coach and team president Stan Van Gundy could build upon.

That Pistons squad was the only team that made the Cleveland Cavaliers sweat on their way to the NBA Finals when they beat the Golden State Warriors for the 2016 championship. With Reggie Jackson as their heart and soul, the organization was excited for the next season. For all they knew at that point, the sky was the limit.

At the start of training camp Jackson was diagnosed with knee tendinitis and received platelet rich plasma treatments. He missed the first 21 games of the season.

When he came back, he got off to a slow start as he got his game legs back, then surged in the middle of the season before falling off a cliff in the final third and finally being shut down in late March during a long-shot playoff push.

In spite of being a hard-working floor general who has repeatedly molded his game in whatever direction his team needs, and in spite of playing hurt in a city which ostensibly prides itself in honoring its sports warriors who play through pain, Reggie Jackson is much-maligned in the fan base. He’s only remembered for his poor play while battling through injury, and for his own sake a fresh start elsewhere next season may be in his best interest as a result.

Blake Griffin’s story isn’t written in stone yet, not the way Jackson’s is. Griffin will likely be a Detroit Piston until at least the end of his contract in 2022. He may yet gain some health back, maybe somehow this recent stretch is an aberration, any number of outlandish things may develop in the meantime by which he snaps back to normal and is the superhero Piston fans remember from last season.

More likely than not, however, Griffin will be a shadow of himself. Some night he’ll drop 30, probably because an outlier number of his 3-point attempts find their mark, and the narrative will change for a bit.

Some weeks he’ll be held to single-digit scoring. Some months he’ll shoot 35% from the floor with high usage.

For better or worse, the declining Blake Griffin experience is what the Detroit Pistons signed up for when they traded for him two seasons ago. While it’s tempting to ride him hard this season and try to make an entirely attainable playoff push, his recent play demonstrates that even superheros have breaking points and can be detrimental.

Whatever it takes for the Pistons to get him healthy is what they need to do. There’s no timetable to return that’s too long if it gives them a chance at sustainable health down the road. We’ve already seen from the horror show that happened to Reggie Jackson what can happen when a player’s physical limits are not respected, and it’s unacceptable to go down that road again.

Oracle BrandVoice: Can I Go To Your University? This Chatbot Has The Answer.

How To Create A Buying Experience Your Customer...

How Candi Carpenter And Brandi Carlile Created The...