Breaking
Seven Ways To Thrive As A Remote-First Team
Five Ways To Network In 2020
Deckers Outdoor Stock Still Attractive At $258?
Save $50 Off A Fitbit Sense With This...
Meet Jordan Wise & Hamish Stephenson: The Founders...
Google Plex: The Mobile Banking App Every Bank...
Future Of Intimacy: Sex Bots, Virtual Reality, And...
How to Create the Best Facebook Cover Photos...
How To Continue Working Remotely Even If Your...
Apple Dominates Microsoft In MacBook Pro Vs Surface...
Do You Know If You’re Prepared For Retirement?
Law Professor Argues Opportunity Zone Program Is Harmful
The Amazfit GTS 2 Mini May Be One...
Hotelier/ Billionaire Philanthropist Jonathan Tisch: What A Hospitality...
More Entrepreneurship, Less Recidivism Among The Formerly Incarcerated
Do S&P 500 Investors Really Want To Buy...
Home General Blockchain’s New Standard Bearer
General 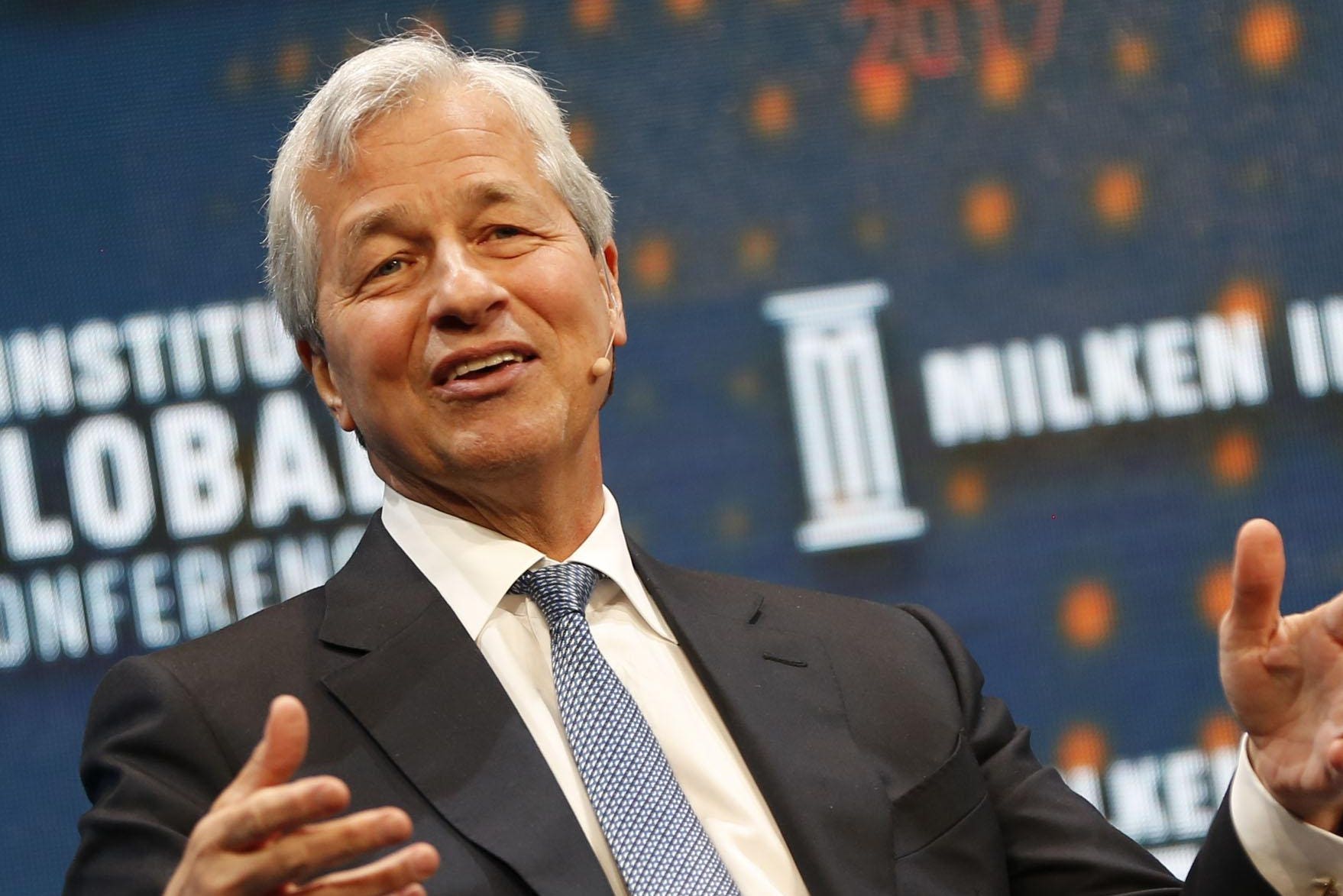 J.P. Morgan detailed the first use of JPM Coin for cross-border commercial payments this week. Onyx, the bank’s blockchain and digital currency development business, is close to commercializing their efforts.

In February 2014, Jamie Dimon famously sounded the alarm that Silicon Valley wanted to eat J.P. Morgan’s lunch or, at least, they would try. In the six years since, the bank has become one of the most forward-leaning when it comes to implementing FinTech. Yesterday, J.P. Morgan announced that it’s digital currency, JPM Coin, is live and being used by a “large technology client” for cross-border commercial payments. Additionally, the announcement detailed progress at Onyx, a new business that houses the bank’s blockchain and digital currency development efforts. While the popular press had been quick to point out Mr. Dimon’s disdain for bitcoin as late as last year, it is evident the bank has never doubted blockchain’s potential. Blockchain may be for Jamie Dimon what the railroads were to John Pierpont Morgan in the late 1800s. Like the railroads, the intersection of blockchain and payments could revolutionize commerce and commercial finance.

The Intersection Of Payments And Blockchain

The successful commercial application of blockchain technology in payments is significant given the continued attention to the space since 2019, when three megadeals fueled over $118 billion of M&A activity. At the time, talk among investment bankers was that this potentially signified the top of the market. It made plenty of sense—the most mature segment in FinTech was ripe for consolidation. Payments is a low margin business that faces continuous price compression due to new competition (including startups since late) and ever-changing client demands. Contrary to this belief, interest in payments has flourished. In the four quarters since Fiserv FISV , FIS FIS and Global Payments GPN acquired First Data FDC , Worldpay and TSYS, over $13.5 billion in early-stage funding has poured into the space.

As banks face years of a flat yield curve environment, they have been on the hunt for non-interest income (fees). What better place to do so than in payments? Payments and banks are a natural fit. Recall that TSYS was spun out of Columbus Bank and Trust (now known as Synovus), Fifth Third FITB once owned Vantiv WP (which became Worldpay) and U.S. Bancorp TBBK still owns Elavon.

The evolution of thought around payments is key. If you haven’t read an article or heard a panel or podcast about embedded finance, then you’ve probably been living under a rock. While embedded finance is not a new concept (think captive finance companies), FinTech has enabled it in a whole host businesses. Payment facilitators (Payfacs) like Paypal, Square and Stripe have spawned a host of startups that allow non-FinTech businesses to offer payments (and other financial services) and add new revenue streams. According to Andreesen Horowitz’s Angela Strange, every company could become a FinTech.

While much of the discussion around payments innovation has centered on consumer-to-business (C2B) payments, business-to-business (B2B or wholesale) payments dwarfs the space. According to a Business Insider Intelligence report, B2B payments volume reached an estimated $18.5 trillion in 2016 vs ~$5 trillion in C2B payments. For the banking industry, wholesale payments and cash management signifies a substantial revenue pool—$250 billion.

The Cost Of Doing Business

The implementation of the blockchain in payments brings the industry one step closer to eliminating checks (and their associated costs) completely. While most of us have accepted electronic bill payment as consumers, the concept has “just” taken root in wholesale payments. According to NACHA, 42% of wholesale payments were made by check in 2019. While this is a huge improvement from 51% in 2016, it is still amazing that Pete Kight’s vision is a work in progress 40 years later. Eliminating paper checks could reap huge cost benefits when one considers the human effort behind payment (accounts payable), receipt (accounts receivable) and settlement processes involved. Takis Georgakopoulos, J.P. Morgan’s global head of wholesale payments estimates that the blockchain can eliminate 75% of total costs involved in check processing.

As supply chains have become more global and international trade has become more commonplace, the need for reliable cross-border payments and the demand for open account trade finance have increased. Employing the blockchain will allow for the timely transmission of data to execute trade finance obligations and reduce the myriad errors that can occur when working with a network of global correspondent banks, managing foreign currency and settlement via local payment methods. For J.P. Morgan, which processes $6 trillion a day in cross-border payments, seamless transaction flow is a must.

The Importance of Cyber Security

While digitization simplifies many aspects of wholesale payments, it interconnects banks and companies like never before, increasing the number of endpoints susceptible to fraud or cyber attack. In order to advance a fully functioning network, security is paramount. The consequences of a cyber attack could manifest themselves much like traditional bank stressors. When faced with uncertainty, the tendency is to hoard liquidity, which could trigger a “run on the bank,” further causing solvency issues. For this reason alone, J.P. Morgan’s progress on the blockchain is welcome news.

In January 2020, Federal Reserve Bank of New York issued a  “Pre-Mortem Analysis” on Cyber Risk that stated that financial services firms are likely to experience up to 300 times more cyber attacks per year than other firms. According to the report, a cyber attack on any one of the five most active U.S. banks would impact, on average, just under 40% of bank assets on the network. An attack on as few as six network banks below $10 billion in assets (or one bank between $10 billion to $50 billion in size) could cause systemic impairment. That risk multiplies when third-party service providers (that’s you, FinTech) connect otherwise unrelated banks.

Reducing costs and ensuring network security are fine reasons for the application of blockchain in wholesale payments, but they are just the tip of the iceberg. When Goldman Sachs GS announced its intent to compete in transaction banking, it cited four pillars for next-generation treasury management: data, global payments, liquidity management and virtual accounts. Blockchain technology now provides banks the means to safely transact not only payments, but data—data that could be utilized to rate its client’s credit-worthiness. By gathering and analyzing this data (including daily payment flows), banks can dynamically gauge their appetite for risk. This will empower banks to structure financial products and tailor financing programs to meet each corporate’s liquidity. The transparency that blockchain brings potentially widens the market for existing bank products like trade and supply chain finance. For corporate treasurers and CFOs, their transaction banking relationships become ubiquitous. Armed with data gleaned from their clients’ payments history, bankers are able to forecast client cash flows and anticipate future liquidity needs, while minimizing delinquencies and default.

The House of Morgan is no stranger to innovation. Not insignificant from yesterday’s announcement was the bank’s shift from research and development to the commercialization of the bank’s blockchain efforts. It’s been a busy five years for Onyx. In addition to establishing Liink (a blockchain-based peer-to-peer network connecting banks and corporates) and JPM Coin, it has run projects in Capital Markets (Dromaius) and tested central bank payment rails (Project Ubin). The application of blockchain technology in wholesale payments makes existing processes more efficient while opening the door to financial products once only thought about, but only now possible through FinTech. Not unlike the railroads, mapping out the vision, building the network and establishing a solid infrastructure are key to the successful application of blockchain in finance.

Meet Glyn Aikins & Riki Bleau: The Duo Behind The Scenes Driving The Success Of The U.K. Rap Industry