Breaking
What an Effective Business Cloud Must Include
5 Ways to Make Running a Business Easier
4 Solutions for Work-from-Home Stress
Doug Flutie Maximum Football 2020 Review: The Good,...
How To Delegate Effectively
Stock Market: Two New Trends Shaping Next Buying...
European Commission Legislative Package For Cryptoassets Leaves No...
Apple iOS 14.0.1 Release: Should You Upgrade?
Social Media Marketing Consulting
What You Need To Know About Your Startup...
Governor Signs Landmark Student Loan Borrower Protection Bill...
Reddit Co-Founder Alexis Ohanian Plans $150 Million Investment...
This Week In XR: Enterprise Adoption And Financing...
The Disadvantages Of Aging In Place
How Advances In Customer Service Can Take Telehealth...
5 Reasons Why Your Startup Needs To Be...
Home Technology Blowing Off Dr. Birx — Why Is America Ignoring Its Top Woman Physician?
Technology

Blowing Off Dr. Birx — Why Is America Ignoring Its Top Woman Physician?

From the beaches of California to the lakes of the Ozarks, the scenes of Americans ignoring social distancing guidelines over Memorial Day weekend were hard to miss. They also stood in stark contrast to the recommendation of most public health officials, including those of Dr. Deborah Birx, the nation’s top woman physician and the coordinator of President Trump’s White House Coronavirus Task Force.

Which begs the question, what is the real reason Americans are blowing off the advice of Dr. Birx?

It’s not for her lack of getting her message out. Over the past several weeks, the well-respected physician and diplomat has been telling Americans about the importance of wearing face masks and exercising social distancing on an almost daily basis. On Friday, ahead of the holiday weekend, Birx was direct in her advice to the American public. “You can go out, you can be outside, you can play golf, you can play tennis with marked balls, you can go to the beaches, if you stay six feet apart,” Birx said, trying to walk a tightrope of encouragement and caution. 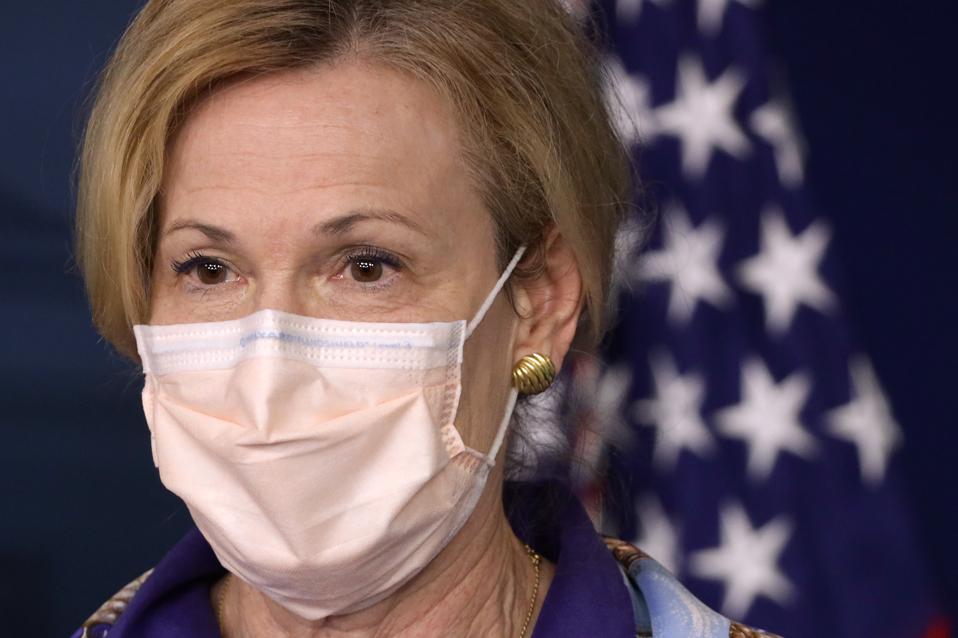 WASHINGTON, DC – MAY 22: White House coronavirus response coordinator Deborah Birx speaks during a … [+] news briefing at the James Brady Press Briefing Room of the White House on May 22, 2020 in Washington, DC. President Trump announced news CDC guidelines that churches and places of worship are essential and must reopen now. (Photo by Alex Wong/Getty Images)

But as the nation clearly disregarded the appeals Birx and others were making over the holiday weekend, including President Trump who golfed two times over the weekend without a mask, her messaging about the risk of asymptomatic transmission became even more urgent. On Sunday during an interview on ABC’s “This Week,” Birx doubled-down on the importance of listening to the pleas of public health officials.

“I think it’s our job as public health officials every day to be informing the public of what puts them at risk, and we have made it clear that there’s asymptomatic spread,” Birx said. “That means that people are spreading the virus unknowingly, and this is unusual in the case of respiratory diseases in many cases. So, you don’t know who’s infected. And so we really want to be clear all the time that social distancing is absolutely critical. And if you can’t social distance and you’re outside, you must wear a mask. These are items that are really critical to protect individuals.”

So if Americans are hearing the message from their health officials, why aren’t they listening? One reason may be the number of mixed signals from other leaders, particularly men. President Trump, through both his words and actions, is seemingly sending the exact opposite message of Dr. Birx. And numerous conservative-leaning media outlets have questioned not only the need to slowly reopen the country, but they have questioned the science behind it too.

But Trump isn’t alone. This past week, a USA Today opinion column by Kentucky Senator Rand Paul and Arizona Congressman Andy Biggs, both Republicans, painted both Dr. Birx and Dr. Anthony Fauci, Director of the National Institute of Allergies and Infections Diseases, as obstacles to Americans getting back to their day-to-day lives. In the column, the Senators wrote “… now that governors are trying to open up their communities, allow hospitals to determine whether they can provide elective surgeries, and trust the American people to exercise their freedom responsibly, [Dr. Anthony] Fauci and Dr. Deborah Birx attempted to scuttle the opening.”

Yet perhaps beyond politics there is even a more troubling reason why Americans are ignoring Dr. Birx. Could it also be that she is a woman? There is a long history of women being devalued in science, and their contributions routinely diminished. In fact, numerous studies have shown how gender discrimination affects women scientists in academic institutions. A recent study has shown that male scientists are more likely to be recognized and promoted than female scientists as the result of subtle gender biases. And a 2017 report from the Academy of Management Journal confirms what many women know all too well — when female leaders, even high ranking ones, express constructive solutions in the workplace, their voices are often ignored.

As science moves from the labs and the academy to the center of pandemic-focused public life, it’s not surprising to see some of those same trends manifest themselves on a broader scale. And despite a clear case that women are more effective leaders than men, particularly in crises, the curious case of Dr. Birx being increasingly ignored is reason for worry.

If Americans are to navigate the uncertain days of a fast-changing pandemic, they will need to listen to more than their own instincts and desires. They will need to heed the advice of the scientific and medical leaders who have the insight and credibility to chart a healthier course for the country. By blowing of Dr. Birx, they are illustrating a form of  ignorance, and even sexism, that not only bodes poorly for society, but bad for their health as well.

On Memorial Day, Benefits For Families Of The Fallen