Breaking
ESBC Major Updates: Tons Of Heavyweight Greats Added...
5 On-Demand Courses To Help Develop Your Leadership...
How to Run Nonprofit Marketing Ads
Entrepreneurs Are Bringing Transparency To Home Buying And...
Best Incentive To Get Vaccinated: Money, Messaging, Or...
Page Level Query Analysis at Scale with Google...
How A CIO Can Align IT With Business...
Blogger of the Month: Jo, Girl Eats World
6 Things Women In Business Know That Men...
How to Use First-Party Data for Ad Personalization
Pressing Reset—Putting A Fallen Unicorn Back On Its...
How We Went Viral: Promoting Content with Influencers,...
Blame Olympic Record Price Tag For Return To...
Apple iOS 14.5 Release: Should You Upgrade?
How to Come up with Podcast Topics and...
Why Gaming Gear Company Razer Launched A $50...
Home Technology ‘Blue’ Jupiter And Its Giant Moon Dazzle In New Photos From NASA’s Juno As It Marks 4 Years In Orbit
Technology

Jupiter as a crescent as Juno approached it at the weekend.

NASA’s Juno spacecraft has sent back yet another batch of astonishing new images from Jupiter—and some unique images of its moon Ganymede have also emerged.

These new images from its 28th flyby come as the solar-powered spacecraft celebrates four years in orbit around the gas giant planet, which has just come to opposition for us on Earth, along with fellow giant planet Saturn.

At Jupiter since July 5, 2016, Juno has been in an elliptical polar orbit that has it spend most of its time away from the planet.

Only every 53 days does it get close to Jupiter, but during its brief flyby it gets super-close to the planet’s cloud-tops to take some astonishing photos. 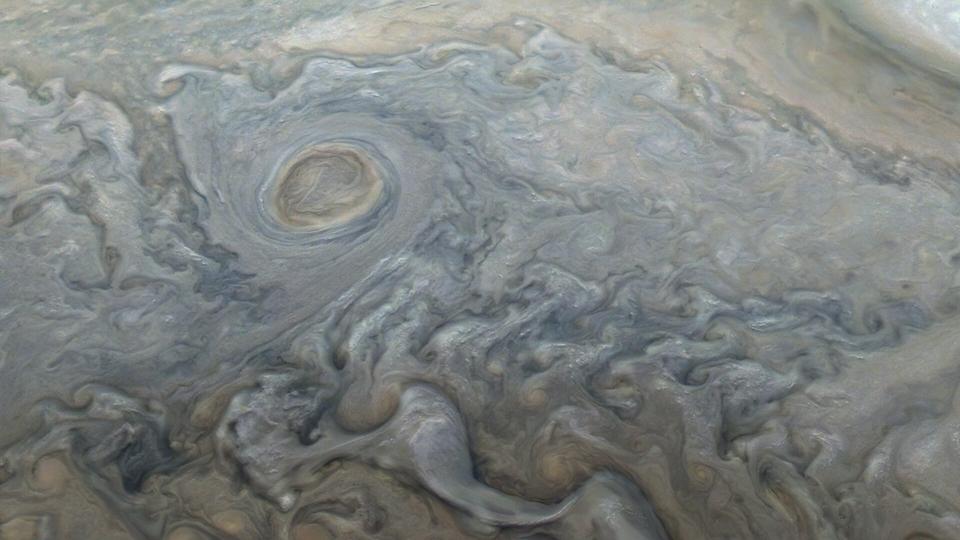 Each dip close to Jupiter is called a perijove, which is Greek for the extreme points in the orbit of one body around another.

It’s in the few days after each perijove that Juno sends back its images via NASA’s Deep Space Network.

However, NASA isn’t actually responsible for most of the images we see coming from Juno at Jupiter; raw imagers from JunoCam are uploaded after each perijove and very soon freely available for “citizen scientists” to download and post-process into wonderful photos.

“Juno’s images have taught us so much about the dynamic nature of Jupiter’s atmosphere in a level of detail that we haven’t ever seen before, especially when correlated with data from the infrared imager, magnetometer data, and with Earth-bound observations,” said Kevin M. Gill, a software engineer at NASA-JPL, to me via email. Gill is one of the hardest working “citizen scientists” on the JunoCam. “Most of the work is done when I’m on lunch, a break, or after hours,” he said.

The public availability of Juno’s raw images have resulted in some incredible images including Jupiter’s “racing stripes,” its giant jet-stream, a classic “Jupiter Marble” portrait, and a “churning” Jupiter.

MORE FROM FORBESIf You Ever Wanted To See The Rings Of Saturn, This Is The Week They’re Brightest And BestBy Jamie Carter

Its unusual orbit enables it to take valuable scientific observations, though arguably it’s the wondrous images it sends back that have made it one of the most popular NASA missions yet.

The spacecraft’s JunoCam shoots images as it spins using its basic two-megapixel, 58° field of view camera.

Although Juno hasn’t been able to study many of Jupiter’s 79 moons, NASA last week published images the probe managed to snap of its giant moon Ganymede. Bigger than the planet Mercury, Ganymede consists primarily of water ice and is the only moon in the solar system with its own magnetic field. 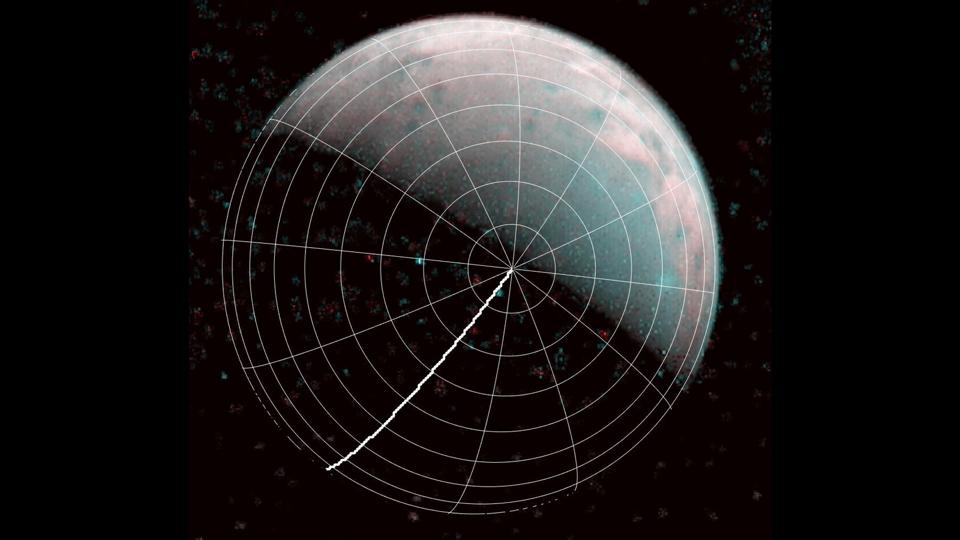 The north pole of Ganymede can be seen in center of this annotated image taken by the JIRAM infrared … [+] imager aboard NASA’s Juno spacecraft on Dec. 26, 2019. The thick line is 0-degrees longitude.

Juno’s JIRAM was designed to capture the infrared light emerging from deep inside Jupiter, probing its weather down to 30 to 45 miles (50 to 70 kilometers) below Jupiter’s cloud tops. However, the instrument can also be used to study the moons Io, Europa, Ganymede, and Callisto.

Here’s a wonderful time-lapse video from Gill that compiles images taken by JunoCam during June’s perijove 27 flyby of Jupiter:

Juno is part of NASA’s New Frontiers missions. It launched on August 5, 2011, on an Atlas V rocket, reached Jupiter in July 2016. 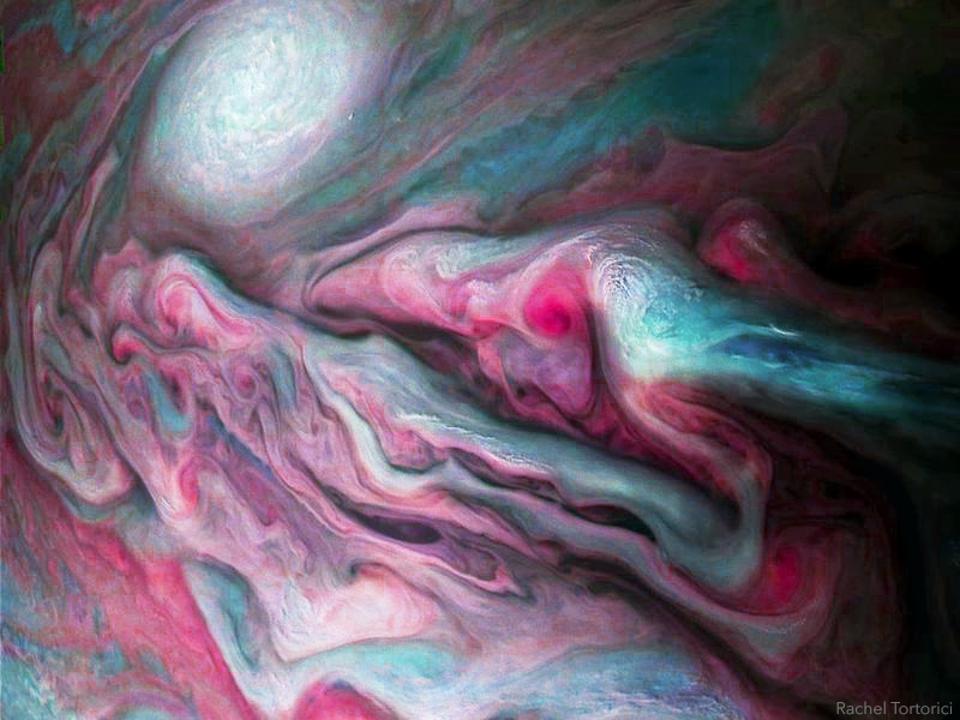 Juno will complete its mission on July 30, 2021. While on its 35th and final perijove it will be purposely crashed into Jupiter’s atmosphere, where it will disintegrate.

However, Juno’s scientific discoveries will pave the way for the European Space Agency’s JUpiter ICy moons Explorer (JUICE) mission, which from 2030 will spend over three years exploring Jupiter’s giant magnetosphere, turbulent atmosphere, and its moons Ganymede, Callisto and Europa.

So what’s most exciting to Juno’s citizen scientists? “In addition to the obvious current choice, NASA’s Perseverance Rover, I’m very excited about the Europa Clipper mission and the Dragonfly mission to Titan,” said Gill. “All will be returning spectacular and unprecedented imagery of their respective targets.”

Emmy Nominations 2020 – – A Blow To Network TV Or Business As Usual?

FB, AMZN, AAPL And GOOG Could Make For A Volatile Friday