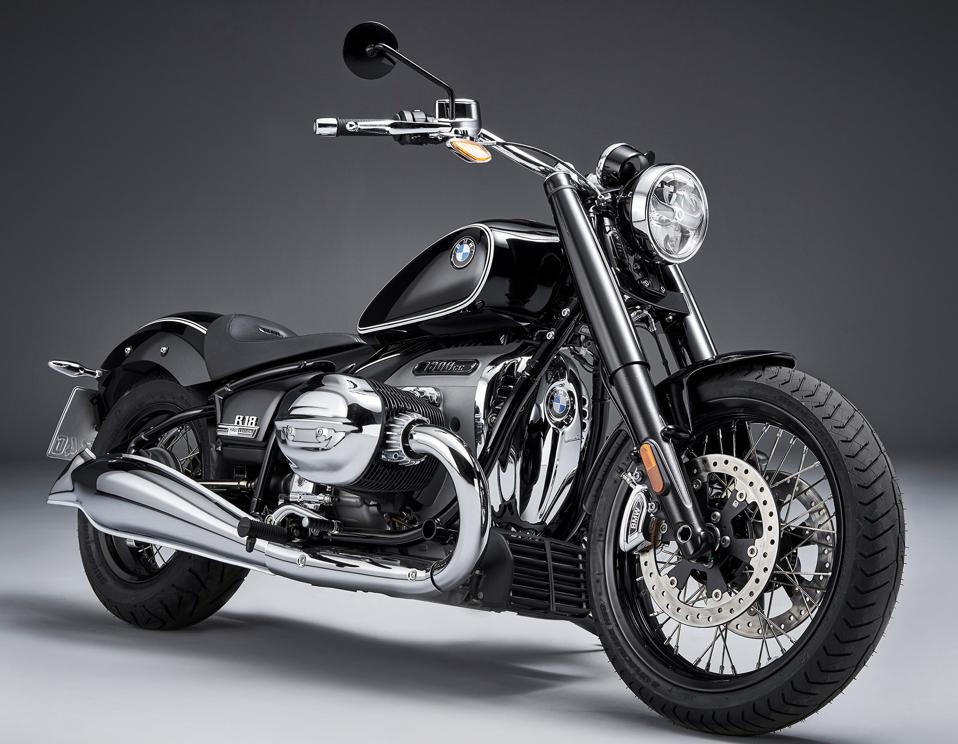 Back when Harley-Davidson was printing money selling bucks-up cruisers faster than it could make them, every bikemaker in business wanted a taste of that cruiser action – even BMW. The result was the R 1200C lineup of boxer-powered cruisers, which many felt were ill-conceived and ugly. Not everyone, though, as the bikes still have their fans. But eventually, the C-line went away as BMW moved focus to the sportbike, dual-sport and sport touring markets.

Now, BMW is back in the cruiser business with the new R 18, and it looks like they’ve learned their lessons from the past – as in, a lot of their past. While the R 1200C bikes were somewhat of an invention, the R 18 is much more clearly a tribute to iconic machines of the past, with modern tech – and big horsepower – along for the ride.

The new bike shows off the forms and shapes that make Beemerphiles smile, including the classic double loop steel tube frame, spoke wheels instead of snowflakes, simple instrumentation, a standard riding position and an air-cooled opposed twin ticking away in near-perfect balance. But look closer, and you can see that BMW took their many enthusiasts’ words, dreams and suggestions to heart after the R 18 concept bike was shown off last year. The production machine looks great right out of gate, say what you will about the swooping neo-vintage pressed-steel style exhaust pipes terminating in a semi-fishtail. Not your thing? Easily fixed. But I love them, and applaud the courage BMW demonstrates by including them as stock. It’s a bit of artful panache the usually staid Bavarian bikemaker removes during the journey from concept to production machine, so here’s to them. 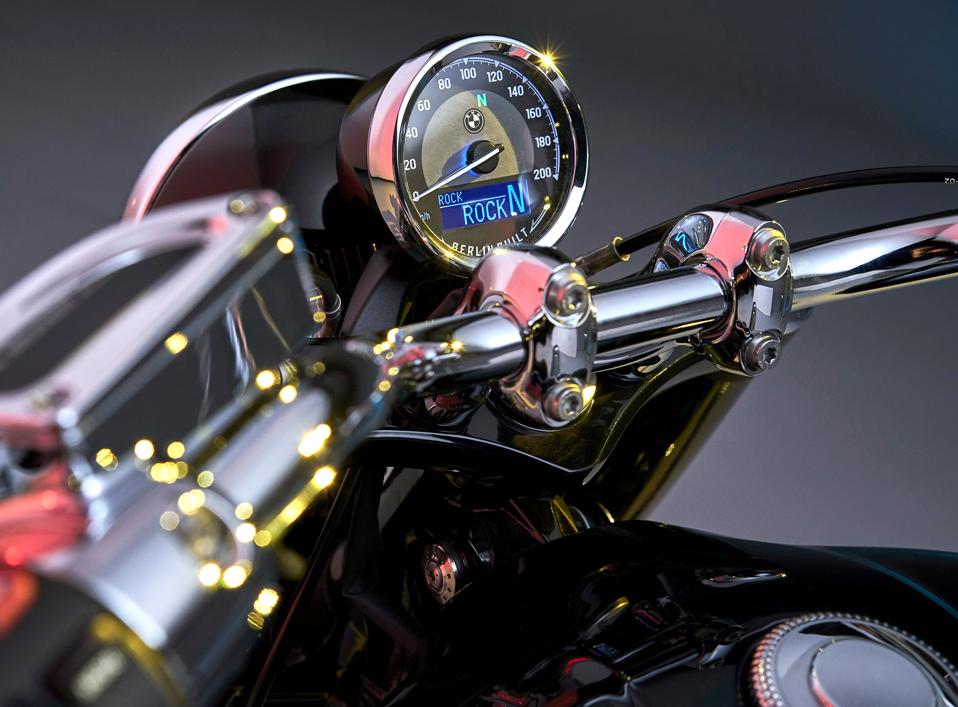 Look closer and more nice touches appear. The shaft drive is naked and unafraid to spin out in the open air. The gas cap is knurled and purposeful. The rear suspension is hidden, giving the R 18 a classic hardtail look. The LED instrument and the headlight are the proper shape – round – while encapsulating modern tech like an LCD display and LED illumination. More tech peeks out here and there but lives in harmony with classic touches: Triple disc brakes with ABS ride on spoke wheels, the

modern fork moves under slider covers like the machines of old, no telelever trickery to be seen. Your feet sit on pegs under your thighs, not out by the front axle. Paint is gloss black with double white pinstripes, just like it was on the rightfully heralded R 5 from the 1930s and other well-loved vintage boxers from across the early decades. In a reveal video, it appears designer Roland Sands’ shop had a bit of a hand in designing at least some of the bits. For those already thinking of changing things up, BMW made the painted pieces easy to remove, and easy to change. Have at it. 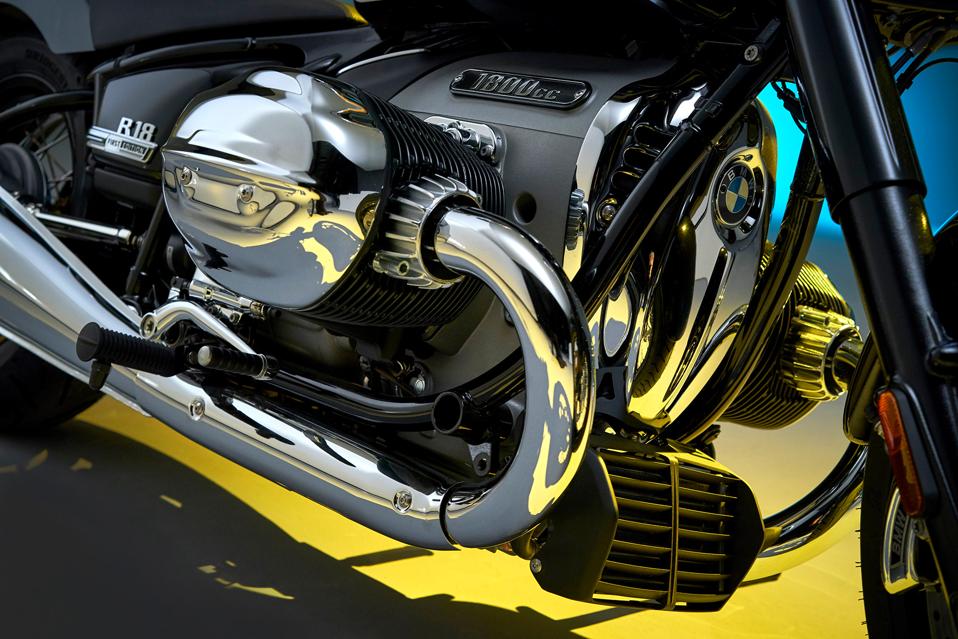 And finally, there’s that engine. At 1,802cc, nearly two liters, it’s the biggest boxer ever and will deliver 91 horsepower and 116 pound-feet of torque. But best of all, the engine is hung in the frame like the boxers of old, a loveable odd-shaped lump with wind-greeting appendages being fed by curling intakes from a rear-mounted airbox. Pity no faux Bings (perhaps that’s for the best) but it’s good to see so much bare metal out in the breeze once again, capped with covers buffed to a nice shine protecting push-rod actuated 4-valve heads. Six speeds spin the shaft drive.

Riders are treated to a solo seat and wide flat bars as stock, but BMW clearly made this bike with personalization in mind, from seats to pipes to bars to painted parts, all of which can be changed up or even discarded with a minimum of fuss. Expect a zeppelin-sized accessory catalog, including Vance & Hines pipe options and more seat options by American outfitter Mustang.

BMW says the R 18 will be available later this year for just under $20,000. How the COVID-19 pandemic affects that timetable remains to be seen, but it can’t get here fast enough.

Ask Ethan: Why Can’t Time Be Reversed For Three-Body Systems?

Budenholzer, The Man Who Could Have Been Fizdale,...

What Makes The COVID-19 Mortality Forecasts Upon Which...

The Wayward One: Spurs’ Deepening Off-Field Crisis Will...

These 4 Industry Leaders Pay Dividends Up To...