In a new report, European credit agency Scope Ratings GmbH predicts that the survival of Europe’s airlines through the coronavirus pandemic will be driven by their fleet ownership and their ability to renegotiate aircraft orders going forward, including re-scheduling or cancelation. This raises questions on whether the grounded Boeing 737 MAX fleet will be delivered, even after it passes the scrutiny of safety bodies. 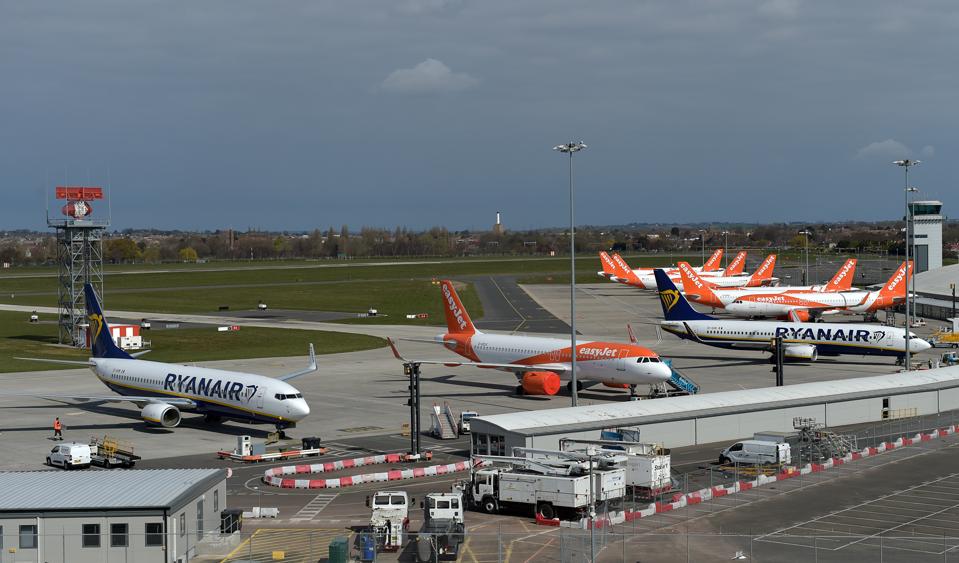 Ryanair and esayJet aircraft parked at Southend airport after airlines reduced flights amid travel … [+] restrictions and a huge drop in demand as a result of the coronavirus pandemic. (Photo by Nick Ansell/PA Images via Getty Images)

Ryanair has 210 Boeing 737 MAX currently on order and was reported to have made an offer to buy additional aircraft in February, before the coronavirus crisis impacted the European market. In a show of confidence in Boeing, IAG had signed a Letter of Intent to purchase 200 Boeing 737 MAX during last year’s Paris Air Show.

“Airbus and Boeing were set to deliver around 430 aircraft in Europe this year — assuming no extended grounding of the US plane maker’s B737 MAX aircraft over safety concerns — but it now looks unlikely many of those deliveries will be made,” said Azza Chammem, analyst at Scope Ratings.

Depending on the timeframe for recovery, airlines may need to re-negotiate their aircraft orders. EasyJet already facing pressure from its founder to cancel existing Airbus orders.

Those airlines which own the majority of their aircraft — including easyJet, Lufthansa, and Ryanair — have more flexible cost structures which will help them stretch their capital reserves. However, given uncertain market conditions, airlines are likely to want to optimize their owned fleet and reduce capital spend by postponing or canceling new aircraft deliveries.

“We assume that some penalty payments would be due if aircraft deliveries from aircraft makers Boeing/Airbus were renegotiated but, regardless of the size of the penalty, the cash effect would be lower than from taking new aircraft into the fleet,” Scope states in its report.

Airlines have other options to preserve cash, including by offering travel vouchers instead of refunds for unflown tickets. IATA estimates the world’s airlines may owe up to $35 billion in refunds to passengers for tickets sold and not flown. Though the airline association could not give an exact share of this liability for Europe’s airlines, IATA Chief Economist Brian Pearce suggested it might be around 10%. That may be a low estimate. According to Scope Ratings, Lufthansa alone had €4 billion ($4.39 billion) in liabilities for ‘unused flight documents’ at the end of 2019.

In its review, Scope Ratings also provides an overview of the liquidity status of Europe’s top five airlines by passenger numbers. 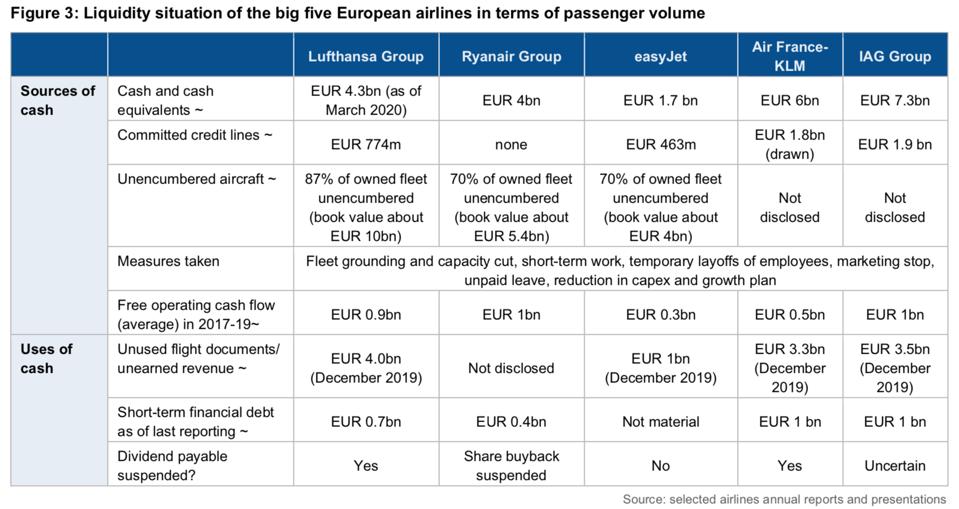 Whatever the pathway to survival and recovery, Europe’s airlines will take away lessons from the coronavirus pandemic that will shape the way they do business in future.

“The COVID-19 crisis is proving a severe test of airline strategy in recent years, with the industry divided between airlines which pursued conservative financial policies, keeping cash on hand as much as possible, and those which favoured returning cash to shareholders through dividends and share buybacks and/or borrowing to expand fleets aggressively,” Scope analyst Werner Stäblein said.

Grocery Prices Are Soaring. Here’s Why And How Long Will It Last.

Helper, Utah Is The World’s Newest Dark Sky Community – Here’s How To Visit

Should Science Communication Focus On Awesome Facts Or...

Why Are Real Estate Agents So Tight-Lipped?

Dreams Die Fast At Old Trafford But All...