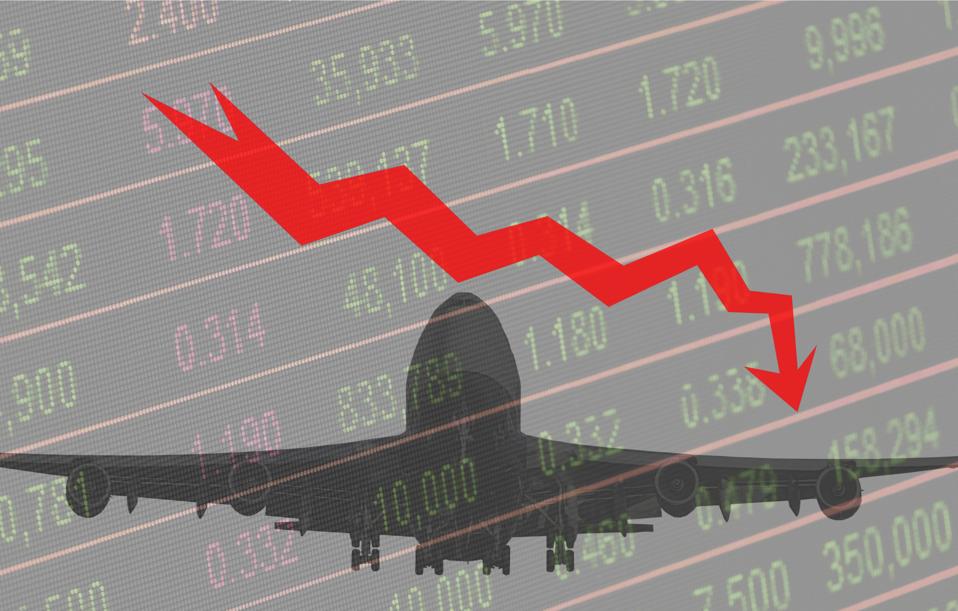 Boeing closed up almost 41% on Friday, a welcome relief after dropping to –36.6% YTD in March

When markets struggle in troubled times, traders hawkishly watch for the turning of the tide. A single newsworthy tidbit can signal the end of bad times, that the economy has shifted, and growth will at last resume. Upon the slightest sign of change, the stock exchange will often explode with activity and rising share prices that reflect traders’ hopes.

Such action occurred this past Friday when the Labor Department released its finding that the unemployment rate had fallen to 13.3% in May, with 2.5 million jobs added back into a sluggish (though not entirely stale) economy. The NYSE rocketed up a cliff on Friday and again on Saturday, bringing many companies along for the ride.

While this news is certainly good, the savvy investor will look for the share prices that are over- and under-inflated on this move. For now, the name of the game is shorting your favorite picks – and our AI (artificial intelligence) is here to help.

The Macerich Company closed up nearly 64% on Friday to $11.16 per share, closing the gap to a “mere” near triple-bear-market down 56.5% YTD. This is a continuation of its overall monthly increase as the week closed 52.7% above its 22-day average of $7.11. These numbers also come with a recent buzz in the market volume – up over 11 million shares from the 22-day average – with Friday closing on volume nearly 19.7 million.

The Macerich Company is the third-largest owner-operator of United States shopping centers, owning interest in 51 million square feet across 52 properties. They, along with many other REITs, have seen their stock jump with reopening – but now face the attendant disruption and destruction of the George Floyd protests. In the long-term, Macerich has been well managed, but our AI expects a significant drop from recent highs, rating this stock a Top Short.

Occidental Petroleum Corporation closed up almost 61% to $20.79 on Friday on massive volume of 118 million shares, reflecting continual increases over the past week. Though prices have been somewhat stagnant since early March, Friday’s close sits nearly 39% over the 10-day price average of $14.99. Despite these recent increases, Occidental is down 50% for the year.

To understand the growth of shale oil over the last decade, it’s important to note that the price of oil had remained relatively high for most of that time. These high prices allowed for the expansion of more expensive sources of oil, such as shale. After oil prices plummeted as part of a key and underreported cause of the economic crisis, Occidental – formerly a growing producer of shale – has stumbled mightily. While share price growth broke the charts yesterday, the low price of oil and high and sudden growth has prompted our AI to rate this company as another Top Short.

Norwegian Cruise Line Holdings Ltd closed up 43% Friday to $22.43 per share – though it barely made a dent in its triple bear market down of 61.6% YTD. Market interest has seen yet another increase this week, continuing a monthlong trend as Friday closed on volume of 109.3 million, up 31.6% from its 22-day average of 74.75 million.

Norwegian is a regular presence in these articles, and never for good reasons. On good news on various indexes of economic health, many of the longest-suffering stocks saw significant jumps, with Norwegian being one such beneficiary. However, Norwegian remains a troubled company in a devastated industry – and is likely to remain such. Our AI foresees the inevitability of more bad news and has rated this stock a Top Short.

The Boeing Company closed up almost 41% to $205.43 a share on Friday, a welcome relief in the midst of the airline’s woes as the stock increased above double bear market down to –36.6% YTD. The stock also experienced an impressive jump in volume, closing on 99.6 million shares compared to the 10-day average of 43.7 million shares (a 128% increase).

Boeing has had a phenomenal month, their stock up 130% from their pandemic market low of $89 a share. While good news has been trickling in, the real turnaround came about when SMBC announced that orders would be delayed rather than cancelled. Demand for the chance to loan to Boeing was high enough to lower the price of borrowing, keeping the company in liquidity and driving share prices above $200. Though this news signals a temporary regain in footing, our AI calls this a Top Short as the market finds its level.

Nordstrom, Inc closed up to $22.62 on Friday, a much-welcomed 40% increase in an industry that has been flailing for months. It wasn’t enough to snap them out of their double bear market down of 44.7% for the year, but prices have been steadily rising all week as the 23% increase over the 10-day average of $18.41 shows.

Nordstrom stands out somewhat amongst retailer peers as a company that worked hard and quite successfully to minimize inventory, which will save time and money as the economy reopens. However, just because it is better prepared to open doors does not make the market bottoming out any less painful. Share prices bounced very high indeed with the rest of the market after the Department of Labor’s announced – and while Nordstrom remains a stock to watch long-term, in the interim our AI has rated it a Top Short for the savvy investor.

Macy’s, Inc. closed at $8.77 a share Friday, up almost 38% for the day, though still dismally down 45.8% YTD. Recent storefront reopenings have been accompanied by gradual increases in price, with Friday coming in up 46% over the 22-day price average. These numbers have also come with a steady increase in market interest, as Friday experienced a trade volume of nearly 76 million shares, a 59% increase from the 22-day, 47.8-million share volume average.

The share price of retailer Macy’s Inc. benefitted like so many other brick-and-mortar-heavy businesses in the rising tide, regaining some lost ground toward pre-crisis highs. Many retailers have already seen new gains as reopening began, and on news that millions were back to work, prices bounced even more. When cooler heads prevail, however, it will be remembered that Macy’s has a long way to go yet, prompting our AI to call them a Top Short.

Ford has had excellent timing – most likely by accident. Just ahead of the new labor report that sent stock prices soaring, Ford announced it was releasing new models of the popular F-150s and Broncos. Though closed factories due to coronavirus has meant falling prices, new models typically mean a bump in profit. The timing of this release sent share prices well above the market’s bounce, leaving our AI to rate it a Top Short before the price falls on cooling passions.

Simon Property Group, Inc. closed up almost 54% on Friday on volume of 23.2 million. A rapid uptick in price – from a 10-day price average of $65.77 to $88.60 on Friday – is indicative of a hopeful real estate industry, while a 128% increase in volume from the 22-day average of 10.2 million shows a continual, tentatively welcome rise in market interest.

Friday’s labor report held good news across the board, but perhaps no industry fared better than the real estate giants who own the bulk of brick-and-mortar shopping centers around the nation. Massive leaps in both prices and volume are apparent across the market, with Simon Property leading the charge. However, with prices leaping so quickly – and likely to leap again as we swing tentatively into summer – our AI has rated this stock Unattractive.

Coty Inc closed up almost 40% on Friday to $5.08 per share, though barely denting the year’s impressive 54% down. The market maintained high interest in the cosmetic giant this week, closing on volume approaching 32.7 million, up 18% from the 22-day average of 27.5 million, though down almost 17% from the 10-day average of 39.2 million.

Coty experienced the market-wide share price hop yesterday, but not just on the good economic news. The multinational beauty company also announced it would be working with Kim Kardashian West on a new cosmetic line – good news for the market, though wary investors remember that last time Coty purchased a brand from the Kardashian clan, prices were reported by Forbes to be inflated. The combination of high price leaps with the memory of a deal gone bad leaves our AI to rate this stock Unattractive.

Delta Air Lines, Inc closed up 35.5% on Friday to $34.16 a share, making small gains on its double bear market down of 41%. It’s their volume that’s impressive this week, however, as markets have over doubled their interest in the past three weeks. Friday closed on volume of 130.4 million, 78% up from the 10-day average and an astronomical 105% above the 22-day average of 63.6 million.

Airline stock can’t seem to find an out from our lists, and this week is no exception. Delta rose with the general market leap on Friday, though they were already experiencing slight gains in the previous week. However, what passes for “good news” in the industry is quite telling: Delta is retiring large portions of their fleet and shuttering flights to a dozen American cities. With recurrent leaps in interest and a clearly struggling balance sheet, our AI has therefore rated this stock Unattractive.

Survivor’s Guilt And Survivor’s Envy: How Downsizing Impacts Those Who Stay—An Interview With Dr. Kim Cameron

4 Financial Conversations You Must Have With Your...