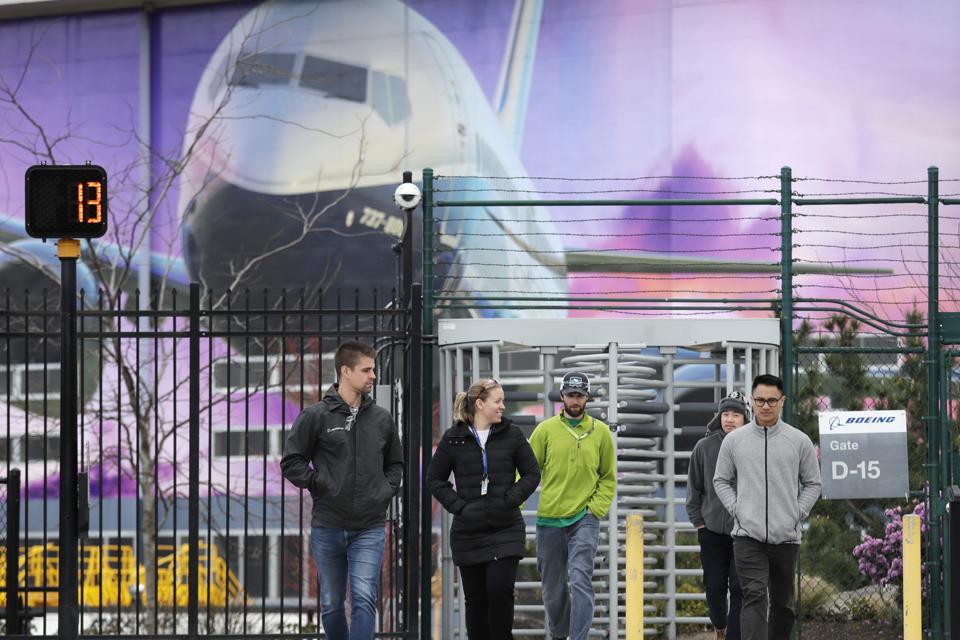 Workers head out a gate at a Boeing airplane manufacturing plant, where a mural of a jet covers a … [+] massive door behind, March 23, outside Seattle, in Renton, Wash.

Boein BA g said Sunday it was extending until further notice a shutdown of its factories in the Puget Sound area of Washington State, which account for the bulk of its commercial airplane production, following the spread of coronavirus among the local workforce.

Boeing had planned to resume work at the factories Wednesday following a two-week halt that was announced after the death of an employee at its widebody factory in Everett from COVID-19, the disease caused by the novel coronavirus.

A Boeing spokesperson said Sunday that there were 135 confirmed cases of COVID-19 company-wide, up from a reported 31 at the time the production pause was announced. About 100 of those cases are in the Puget Sound area, which is home to over 70,000 of Boeing’s 161,000 workers.

The company said it made the decision to extend the shutdown due to the “current assessment of the spread of COVID-19 in Washington state, the reliability of the supply chain and additional recommendations from government health authorities.”

Boeing had already halted production in January of its bestselling plane, the 737 MAX, which has been grounded since March 2019 following the second of two crashes that killed 346 people. The wider shutdown has curtailed production of its sole remaining commercial cash cow, the 787 Dreamliner. It has continued to produce the 787 at its factory in South Carolina.

Figuring out how to adjust production to reduce the risk of workplace transmission of the virus is only one of Boeing and rival Airbus’ problems.

With their airline customers in crisis amid the pandemic, which has led to a steep drop in air travel, Boeing and Airbus may be facing years of lower demand for planes.

“This is a possible prelude to a longer shutdown,” said Richard Aboulafia, an aerospace consultant with the Teal Group.

The plane-leasing firm Avolon said Friday it had canceled orders for 75 737 MAXs worth $8 billion at list value, and industry watchers expect the planemakers will face many more deferrals and cancellations.

Boeing said Thursday it would seek to reduce its headcount by offering workers buyouts, with CEO David Calhoun citing a need to “start adjusting to our new reality now” of a smaller market after the end of the pandemic.

Workers idled by the current pause will continue to be paid till Wednesday. After that they can draw down any remaining vacation or sick days, and will be eligible to continue receiving company medical coverage while claiming unemployment benefits, a Boeing spokesperson said.

How To Get Craft Beer, Spirits And Wine Delivered To Your Home During The COVID-19 Quarantine