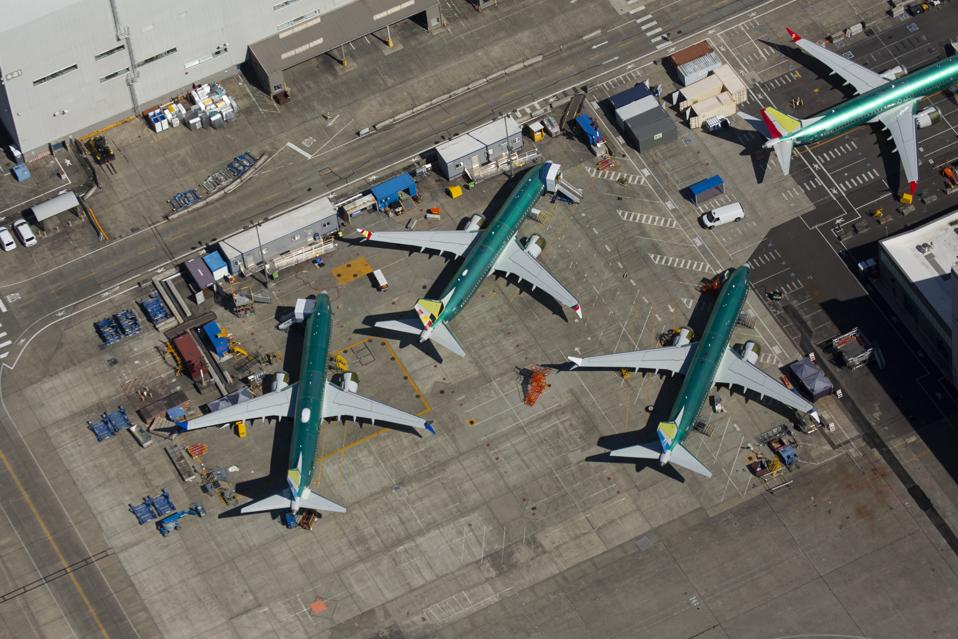 Boeing 737 MAX airplanes are seen after leaving the assembly line at a Boeing facility on August 13 … [+] in Renton, Washington.

Boeing called for $60 billion in financial support for U.S. aerospace companies Tuesday as they struggle with a steep falloff in revenue amid the coronavirus pandemic.

Any taxpayer-funded aid for Boeing is bound to raise criticism after a year of harsh scrutiny of its failures that led to the crash of two models of the 737 MAX. Boeing stressed in a statement that financial support for it would flow through to its suppliers and support the broader health of the U.S. aerospace industry. The statement didn’t specify how much of the $60 billion the company believes it needs.

“The long term outlook for the industry is still strong, but until global passenger traffic resumes to normal levels, these measures are needed to manage the pressure on the aviation sector and the economy as a whole,” Boeing said in the statement.

The plane maker and its suppliers are facing a mounting financial crisis after Boeing ceased production in January of the 737 MAX, its flagship aircraft. Boeing burned through billions in cash as it produced roughly 400 models of the plane that it has been unable to deliver to customers due to the plane’s grounding by global regulators.

Their stress has been compounded by the sudden decline in business of their airline customers as coronavirus has spread worldwide, raising the specter that many carriers will delay delivery of planes, slowing Boeing’s recovery once the 737 MAX returns to service. Parts manufacturers also face the prospect of a sharp slowdown in aftermarket sales with airlines parking planes and deferring maintenance.

Earlier in the day, President Trump said at a press conference that support would be forthcoming. “I think we have to protect Boeing,” he said. “Obviously when the airlines aren’t doing well then Boeing is not going to be doing well. So we’ll be helping Boeing.”

U.S. airlines on Monday called for a bailout of their own, to the tune of $50 billion in grants and loans for passenger carriers and $8 billion for cargo carriers.

Concern has been rising over the past week that Boeing may face a liquidity crisis, with its stock plummeting 44% over that span to close Tuesday at $124.14, its lowest point since 2016. The Chicago-based company disclosed in an SEC filing after the close of trading that it had fully drawn $13.8 billion from a line of credit it had arranged just last month. On Monday, Standard & Poor’s downgraded Boeing debt two notches to BBB from A-, citing a weaker outlook for its cash flows over the next two years.

Critics of the prospect of so much taxpayer money going to Boeing and the airlines have focused on the billions of dollars worth of share buybacks that they have made over the past decade, enriching executives and their shareholders.

Scientists Got Sharks To Bite Into Kevlar. This Is What They Found.

As EU Shuts Borders For 30 Days, What Tourists Must Know

Another Small Business Headache: Some Employees Are Asking...