Breaking
Bitcoin And Blockchain Are The ‘Future’ Of Twitter,...
COVID-19 Pandemic Has Birds Changing Their Tune
Beat Zoom Fatigue With These 6 Tips
How To Sustain (Or Sabotage) A Customer Service/Experience...
How, When And Where You Can See A...
New $2.2 Trillion Stimulus Bill Proposed—$1,200 Stimulus Checks,...
Why Do We Do What We Do? Manipulating...
California Brand Goes All-American As Amazon Bans Foreign...
The 3 Best Analytics Companies of 2020
Senator Cory Booker: Supporting Small, Minority-Owned Businesses Will...
Trump’s Taxes Are Finally Leaked—What’s Next?
Washington Heats Up Ahead Of First Presidential Debate:...
Systemic Racism Leads To Disparities In Nursing Home...
The New Regular: Prepare For Conflicts Of Customer...
Web VR.0 – Have VR Websites (Finally) Arrived?...
This Next Evolution Of E-Commerce Did $18 Billion...
Home Finance Boeing Suspends Dividend, Top Execs Give Up Pay As Congress Moots Coronavirus Bailout
Finance 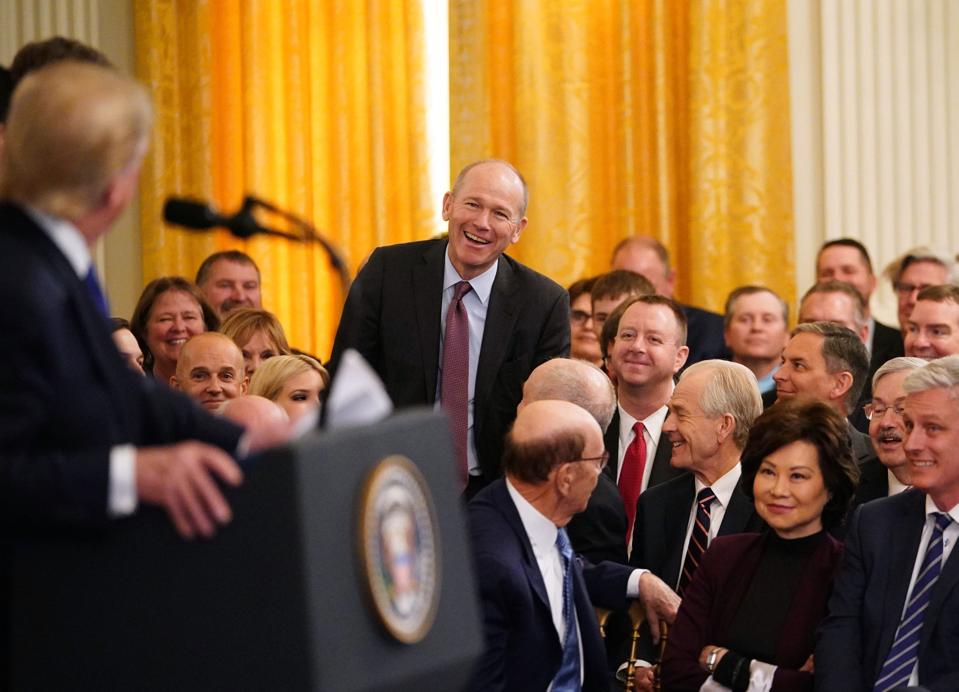 Boeing CEO Dave Calhoun is recognized during a ceremony to sign a trade agreement between the US … [+] and China in the East Room of the White House in Washington, DC, on January 15.

Boeing will stop paying dividends and CEO David Calhoun and Chairman Lawrence Kellner will forgo their pay this year, the company announced Friday evening as it waits for Congress and the White House to complete a bailout package for the battered aerospace industry.

Boeing has requested $60 billion in loans and loan guarantees for itself and its suppliers with their airline customers set to lose billions of dollars amid the coronavirus pandemic, which has decimated air travel. The bailout request has met with sharp public criticism after a year of harsh scrutiny of the company’s failures that led to two fatal crashes of its flagship airliner, the 737 MAX. One talking point: that Boeing was on track to give shareholders $4.6 billion in dividends this year while putting a cup out for taxpayer support.

“This was an inevitable and necessary move if there is to be any government support for commercial jetliner production,” said Richard Aboulafia, an aerospace consultant with Teal Group, of the suspension of dividend payments. “But even without that, it was necessary for Boeing to get itself through this crisis.”

A Boeing spokesperson said the company had nothing to add when asked whether Calhoun or Kellner would forgo stock grants.

Calhoun, a longtime Boeing board member who became CEO in January after the firing of Dennis Muilenburg, was due to earn a base salary $1.4 million this year. His compensation package also includes a bonus of $2.5 million for meeting financial targets, long-term incentive awards worth $7.5 million and restricted stock units worth $10 million.

Boeing and its suppliers are facing a mounting financial crisis after the plane maker halted production of the 737 MAX in January. Boeing burned through billions in cash as it produced roughly 400 models of the plane that it has been unable to deliver to customers due to the plane’s grounding by global regulators.

Their stress has been compounded by the sudden decline in business of their airline customers as coronavirus has spread worldwide, which has led many carriers to delay delivery of planes. Parts manufacturers also face the prospect of a sharp slowdown in aftermarket sales with airlines parking planes and deferring maintenance.

Concern has been rising over the past two weeks of mounting cash flow pressures for Boeing. The Chicago-based company disclosed in an SEC filing Tuesday that it had fully drawn $13.8 billion from a line of credit it had arranged just last month. On Monday, Standard & Poor’s downgraded Boeing debt two notches to BBB from A-, citing a significantly worsened cash flow outlook over the next two years. The ratings agency now expects an outflow of $11 billion to $12 billion this year, down from a prior expectation of positive cash flow of $2 billion.

Critics have charged that Muilenburg and his predecessor and mentor, Jim McNerney, focused on boosting shareholder returns in a manner that eroded the priority that engineering had long held at the company. Under Muilenburg, roughly 95% of operating cash flow went to fund share buybacks and steady dividend increases.

Boeing suspended share buybacks in April 2019 in the wake of the grounding of the 737 MAX in March. In Friday’s announcement, the company said it would extend the pause until further notice.