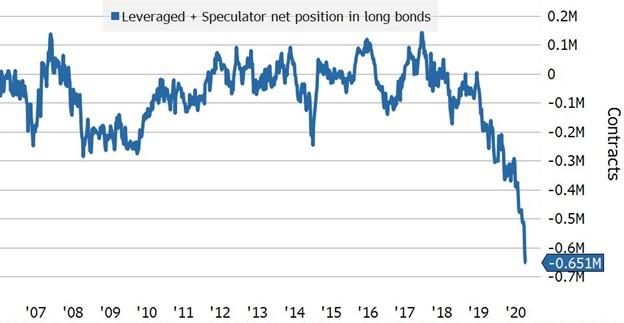 Short positions in U.S. bond futures hit a record last week. As the pivotal election approaches, traders appear confident that no matter the outcome, the result will be more fiscal stimulus. More government spending means an even larger fiscal deficit, and a ballooning deficit means more government bond supply. Add to the outlook a Federal Reserve that is determined to see inflation above its 2% target, and you can understand why investors are betting for long-term interest rates to rise.

The sharpest moves in the bond market tend to happen when it gets surprised. Traders are a unique breed of super-forecasters, constantly adjusting positions to reflect current probabilities of events. Whether the event is an employment number, a Fed meeting or a federal election, market prices adjust to reflect the expected outcome. Currently, with respect to the election, bond traders are anticipating both a near-term stimulus deal and an uncontested Democratic sweep.

Despite the daily headlines, a spending agreement before the election in two weeks is far from a done deal. Without an agreement this week, the size of the total stimulus will be determined after the election.

An election result that leads to Democratic control of the House, Senate and White House could translate to a spending package of more than $2.2 trillion, large enough to ignite fears of massive government bond supply and concerns over potential inflation. Traders are setting up for this outcome by shorting long bond contracts at a record pace. Positions held by speculators and leveraged funds show the largest number of net shorts going back more than ten years. The selling pressure has pushed 30-year bond yields 40 bps higher over the last two months.

Further evidence of growing sentiment toward higher rates can be seen in the growing open interest in put options on TLT, an ETF that tracks long-term government bond performance. Also, a large volatility premium has emerged in the derivatives market for options that pay off when interest rates rise.

Investors may be correct in their prediction of who will win in November, resulting in a wave of supply and higher bond yields. But if they have already positioned for such an event, where will the incremental selling pressure come from? Can you imagine how the shorts will react in a contested election scenario where the prospect for any near-term federal spending evaporates? The rush to cover short positions could be quite spectacular.

There is a saying among veteran traders that the market always moves in the direction that punishes the most people. Right now, the pain trade is lower interest rates. #positioning_matters

Microsoft And SpaceX: The Final Frontier For Cloud Computing

How Outsourcing Key Functions Can Give Your Startup A Competitive Edge