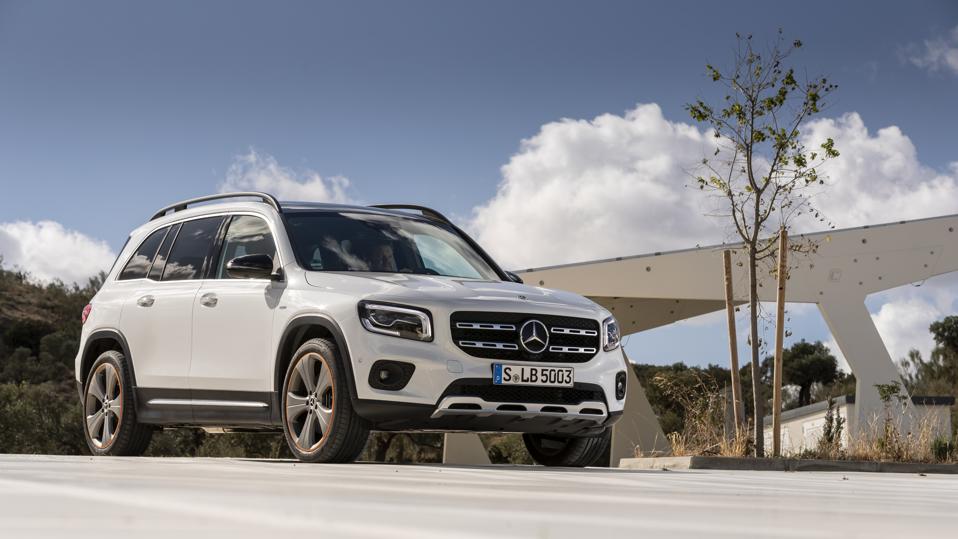 The GLB 250 could become one of Mercedes-Benz’s best sellers at a stroke.

There was the Mercedes-Benz world before GLB and the world after it, because it’s like a perfect storm has arrived and it’s about to wreak havoc in the compact SUV world.

The BMW X1 and X3 and Audi’s Q3 will have to up their games now, with a Benz-badged rival that’s far stronger than the GLA, and it even comes with its pre-baked AMG-badged performance version.

The halo GLB 35 AMG is a world removed from the A-Class hatch that, effectively, sits beneath its five-door SUV skin. There’s a 225kW version of the 2.0-liter, four-cylinder turbo gasoline engine sitting across the front axle, a slicker all-wheel drive system and eight automatically chosen gears.

Below that, Benz has a poverty-pack GLB 200, with just front-wheel drive, but the GLB 250 takes it to an all-wheel drive world that’s surprisingly useful in off-road situations.

The entire range seems to pivot around the GLB 250 4Matic all-wheel drive, with a 2.0-liter petrol four delivering 165kW of power and 350Nm of torque, capable of moving to 62mph in 6.9 seconds.

It’s a strong machine, with 20-inch alloy wheels and 235/45 R20 Bridgestone Alenza tires, plus the option of either fixed or adaptive dampers to match the steel springs.

It climbs well off-road, it hovers wheels in the air, but keeps traction on the earth-based tire, has speed-adjustable hill-descent control and even uses its 360-degree surround camera to help you see in tricky spots. That includes using a low-mounted, forward-facing camera so you don’t accidentally run over rocks you can’t see.

It’s deliberately boxier than both the GLA and the GLC, with Benz working to link it to the hard-core G-Class off roader and almost succeeding.

And yet, even though Benz insists it didn’t try to design a people mover and clad it in a compact SUV’s body, that’s kinda what it seems like they’ve actually done. 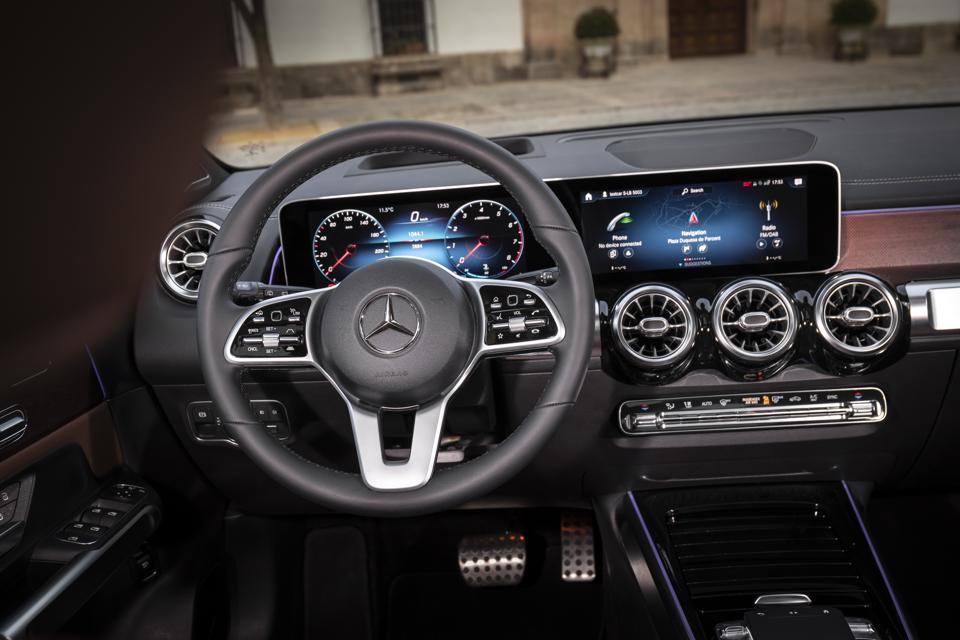 The GLB borrows the A-Class’s digital screens, but adds the G-Class’s vents for a more purposeful … [+] look.

It has good family credentials, with Benz giving the GLB a 100mm wheelbase boost over its A-Class donor-mobile, which has allowed it to fit a 140mm fore-aft sliding system in the rear seats.

It’s almost as long as the very different GLC (which is 4.66 meters long, compared to the GLB’s 4.63 meters long, 1.83 meters wide and 1.66 meters tall) and it’s longer than class mainstays like the Toyota RAV4. 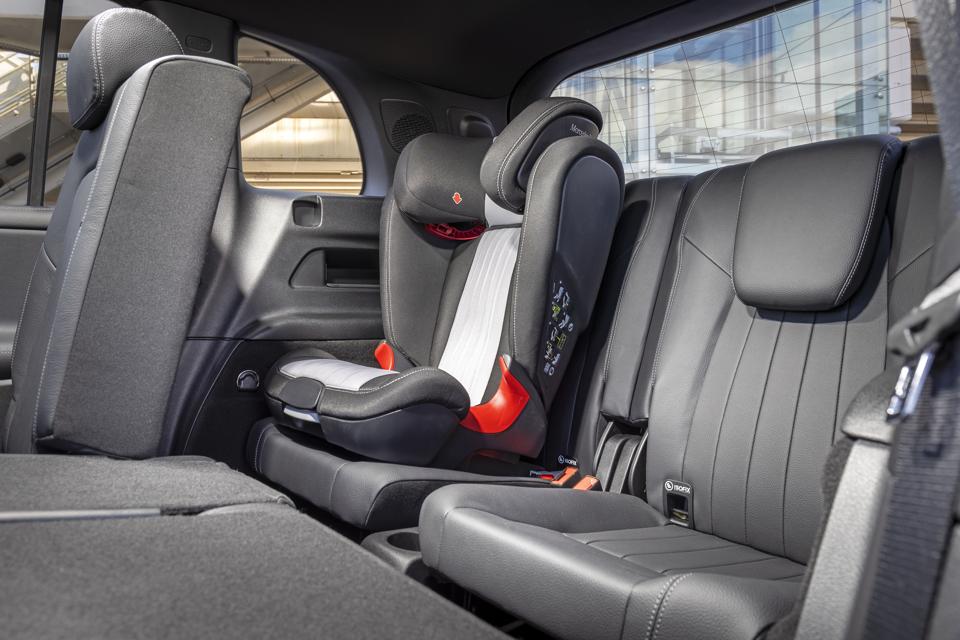 The usefulness of the interior is highlighted by 967mm of legroom and 1035mm of headroom in the rear seats, and it claims the third row (where fitted) can carry 1.68-metre tall people without afterthought (well, other than the lack of dedicated vents).

The interior itself feels airy and friendly, especially with the optional sunroof, and that’s partly because of a low beltline and big glass areas. The exterior vision from the driver’s seat is excellent for its era.

The luggage area is a useful 560 liters (which actually takes a 10-liter advantage over the more expensive GLC) and the third row of seats folds flat into the floor area. There’s not much space for luggage if the third row is full of people, though.

The double-width digital cockpit display from the A-Class is used here again, and it’s just getting better and more intuitive with each passing generation. The voice control is even easier to use and it retains a writing pad to give it a more immediately intuitive feel than pure touchscreen systems.

It uses the same vents at the G-Class and even has an aluminum grab rail in front of the passenger to move the GLB further away from the A-Class’s hatchback positioning. 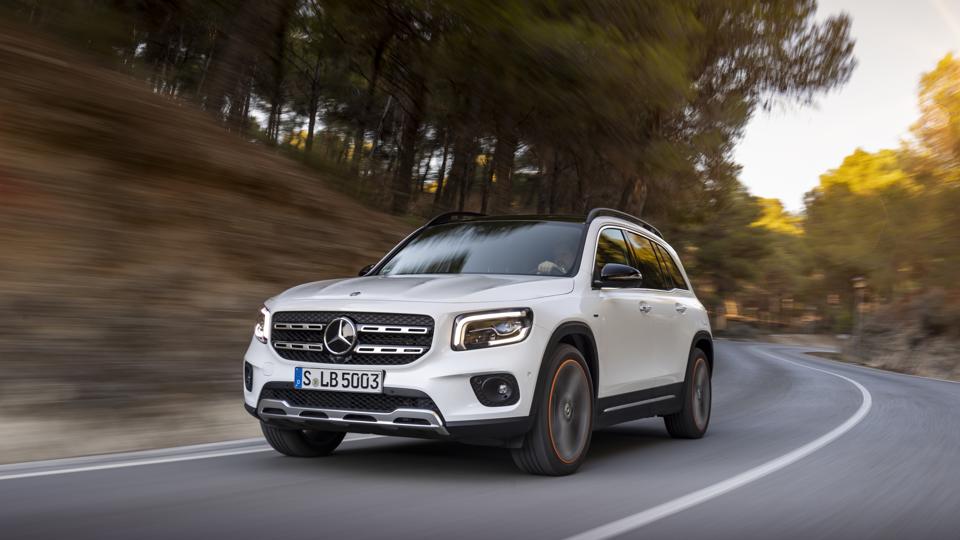 The GLB’s on-road feel is solid, calm, assured and relaxed. For sparkle and verve, you’d need to … [+] switch it up to the GLB 35 AMG

There are cars that surprise you with how competent and classy their road feel is, and the GLB is one of them.

There’s none of the stodginess of some Benzes and it’s clear that it’s aimed at bringing in a younger, family-oriented audience because it has a slightly no-nonsense feel about the way it gets things done.

The front end of the GLB simply goes wherever you point it, and it does it without fuss or bother. You can pile on more speed at the turn-in point but you won’t rattle the SUV’s composure as the understeer arrives and the electrickery calms it all down.

It also eradicates the bugbear of almost every Mercedes-Benz SUV – head toss. Pretty much every Benz SUV suffers from it, where the heads of the occupants are jiggled or thrown forward, backwards and sideways over relatively small imperfections.

Not here, with the longer wheelbase helping the GLB 250 to leap forward in refinement, composure and assurance and it feels very grown up. 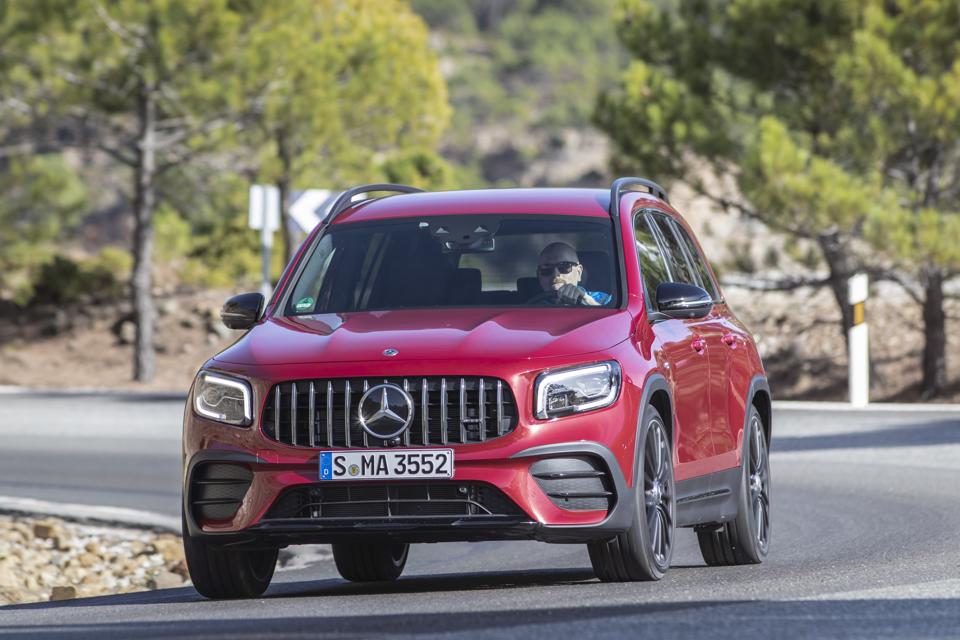 The GLB 35 AMG is the heavy hitter, with sharper handling, more speed and a more accurate front end, … [+] at the expense of the GLB 250’s off-road ability.

There’s a lot to like about the GLB 35 AMG, even if I’m personally no fan of the indulgent fast SUV genre.

It takes 5.2 seconds to reach 62mph and it’s convincing in the way it does it.

It is flexible and crisp in accelerating from any engine speed, but the handling comes as, frankly, a shock.

The A-Class isn’t a massively convincing handling package and I thought the GLB might necessarily follow it down that path. It doesn’t.

It doesn’t quite shine, but it’s frighteningly capable, whipping through bends in a way that’s going to shock passengers into at least silently screaming. 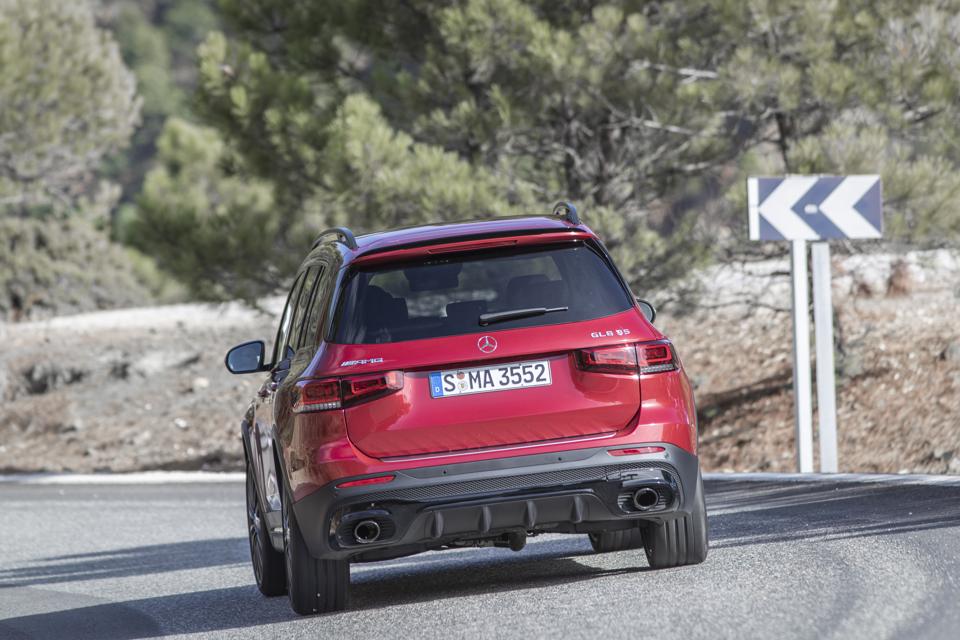 The twin-scroll turbocharger isn’t the only trick to the motor, with its die-cast aluminum crankcase and variable valve timing, and it’s eager and willing to give its all, all the time.

It needs bigger brakes, so Benz gave it four-piston fixed calipers at the front for its 350mm x 34mm discs, and it uses adaptive damping as standard equipment.

There’s a new “Slippery” driving mode that joins the traditional Comfort, Sport, Sport+ and Individual modes, but it pays for it with the removal of some of the GLB 250’s off-road kit like the hill-descent control.

When Families Welcome New Family Members & Cultures: What To Consider

This Bestselling Writer Turned Her Panic Into Purpose