Breaking
Mayo Clinic And Kaiser Permanente Invest $100 Million...
MozCon Virtual 2021 Interview Series: Wil Reynolds
Commodity Spikes May Be Close To Peaking, Futures...
Benefits of Responsive Web Design
ESBC Major Updates: Tons Of Heavyweight Greats Added...
5 On-Demand Courses To Help Develop Your Leadership...
How to Run Nonprofit Marketing Ads
Entrepreneurs Are Bringing Transparency To Home Buying And...
Best Incentive To Get Vaccinated: Money, Messaging, Or...
Page Level Query Analysis at Scale with Google...
How A CIO Can Align IT With Business...
Blogger of the Month: Jo, Girl Eats World
6 Things Women In Business Know That Men...
How to Use First-Party Data for Ad Personalization
Pressing Reset—Putting A Fallen Unicorn Back On Its...
How We Went Viral: Promoting Content with Influencers,...
Home Business Borussia Mönchengladbach Underline Title Ambitions With 2-1 Win Over Bayern Munich
Business 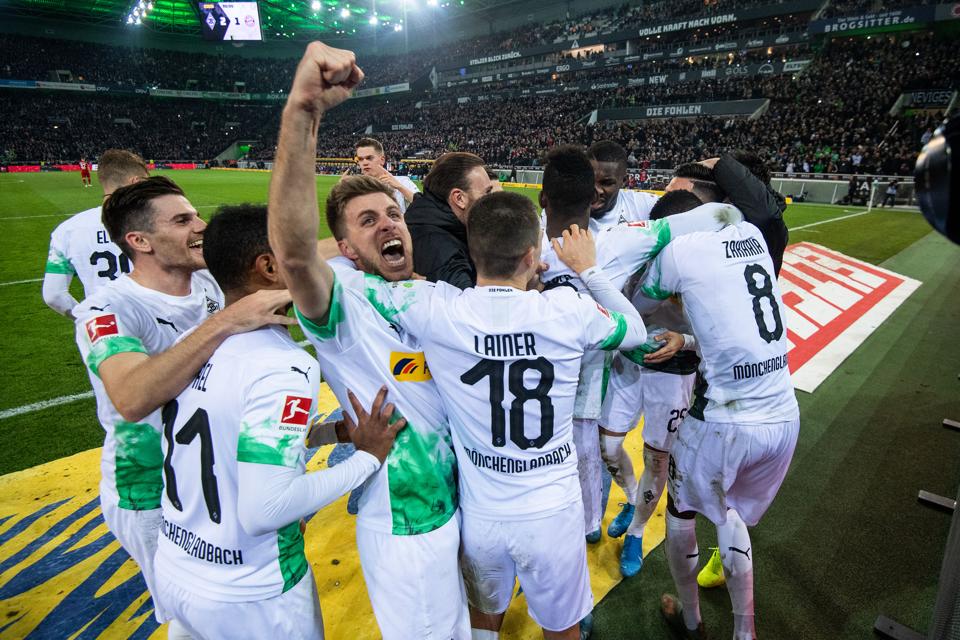 Borussia Mönchengladbach has underlined their title ambitions with a 2-1 win over Bayern Munich. Gladbach’s result will firmly place the Foals among the favourites to win the Bundesliga title. Bayern Munich, in the meantime, could find themselves drop to seventh place depending on the result in the Saturday night game between Bayer Leverkusen and Schalke.

Bayern won four straight games after partying ways with former head coach Niko Kovač. The 4-0 win against Borussia Dortmund and the 6-0 victory over Red Star Belgrade were the highlights of the short Flick reign.

The Rekordmeister appeared to have fixed many of the ailments they had suffered under Kovač. A defense that struggled with high pressing fast teams. On top of that the attack based around star striker Robert Lewandowski has been surprisingly quiet—highlighting once again Bayern’s dependence on their Polish superstar—in the last two matches despite producing the majority of chances in both games.

Against Leverkusen, Bayern had 76% ball possession, but it was die Werkself that scored the two decisive goals thanks to two break aways by Leon Bailey. Against Gladbach, Bayern were only dominant until Gladbach’s equalizer. Bayern had 63% possession and led with 16 to 7 shots on goal but could not put a cap on the game. But only Ivan Perišić in the 49th minute managed to get past goalkeeper Yann Sommer. 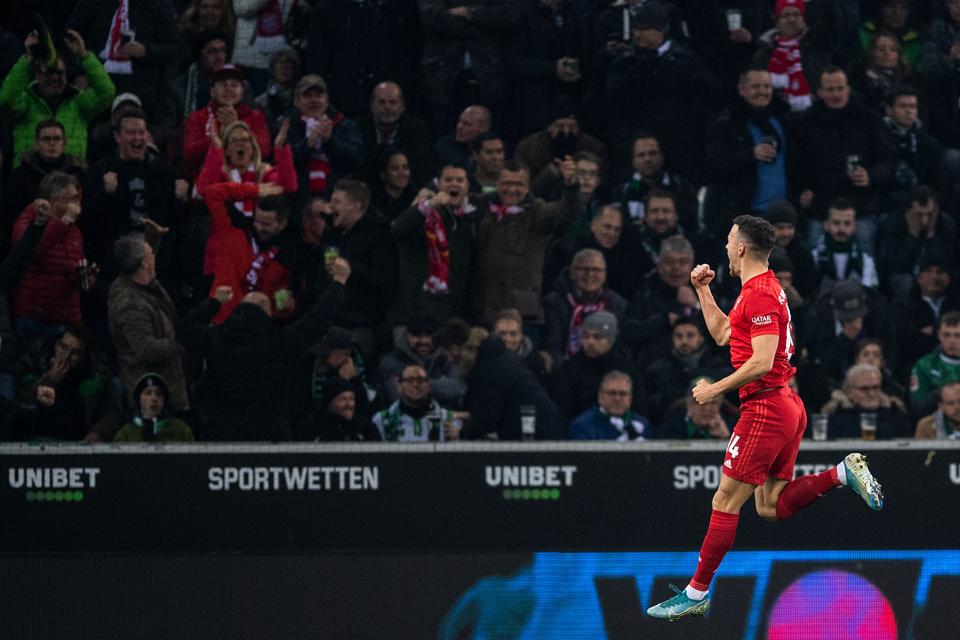 More chances followed for Bayern Munich but the attack was inefficient for the Rekordmeister on Saturday. Instead, Ramy Bensebaini scored the equalizer with a header following Jonas Hofmann corner in the 60thminute.

“We couldn’t complain if we were down after the first half,” Matthias Ginter admitted after the game to WDR Radio. “After [our equalizer] it was better. When we equalized it was an open game and it was emotional and with those fans, we believed we could win.”

Ginter is right. Once Gladbach equalized the Foals got into the match. Head coach Marco Rose managed to make the right decisions as well. The highly rated head coach did not play to hold the result but instead brought on Breel Embolo for Laszlo Benes and Patrick Herrmann for Alassane Plea.

Embolo’s exclusion from the starting XI was perhaps the biggest surprise. Perhaps Rose’s only fault against Bayern was his approach to the game, which was to defensive oriented. But once Gladbach had added extra speed to the attack Bayern certainly started to struggle to contain the Foals.

And Flick? Bayern’s head coach has not made many mistakes in his still young Bayern career. But when Jérôme Boateng had to be taken off with an injury Flick brought on Javi Martínez. It was Martínez, who would bring down Marcus Thuram inside the box in the 91st minute. Martínez was sent off and Bensebaini completed his brace from the spot. 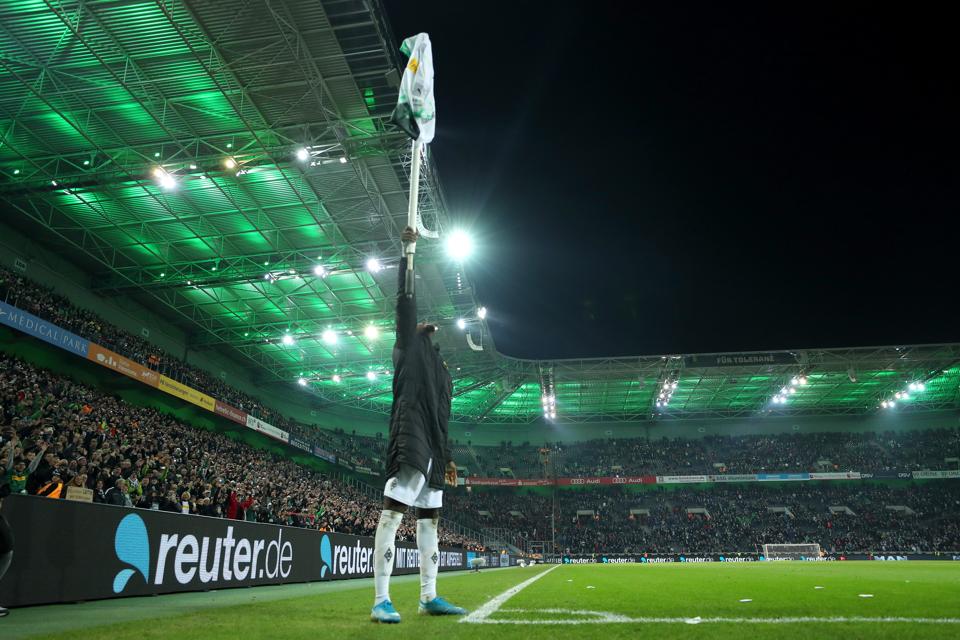 “The alarm bells should have rung before the game,” Joshua Kimmich said. “We knew that if we lose, we would be seven points behind. And if people think that we can simply come back like last year then people should think again.”

There is no doubt that the result will have some implication in Munich. Highly praised interims coach Flick has now lost two crucial games in a row and needs to show his bosses that he can master his first crisis in charge of Bayern.

On Wednesday Bayern will face Tottenham in a meaningless Champions League game at the Allianz Arena and then play host to Werder Bremen on Saturday before travelling to Freiburg and then face Wolfsburg in the last game of the calendar year at home. Three Bundesliga games to close the gap in order to secure a somewhat harmonic Christmas for Flick and the entire board.

What about Gladbach? Could the Foals challenge for their first title since 1977? The last time Borussia Mönchengladbach hosted Bayern as the league leaders was in 1977, the Foals also won the game and then celebrated their last ever Bundesliga title.

“We are happy that we have won but on the other hand there are other teams that have also done well,” Ginter said after the game. Ginter is right. Bayern might be seven points off the top of the table. But RB Leipzig remain just one point behind Gladbach and Borussia Dortmund are back in the title race thanks to a 5-0 victory over Fortuna Düsseldorf.

“A championship race is a marathon and not a sprint,” Ginter concluded.

Manuel Veth is the editor-in-chief of the Futbolgrad Network, which focuses on football in the post-Soviet space, the Bundesliga, and football in the Americas. He has also been published in the Guardian, Newsweek, Howler, Pro Soccer USA, and several other outlets. Follow him on Twitter: @ManuelVeth

Gift This, Not That: Nomad Lighting Cable Vs. Apple Lightning Cable