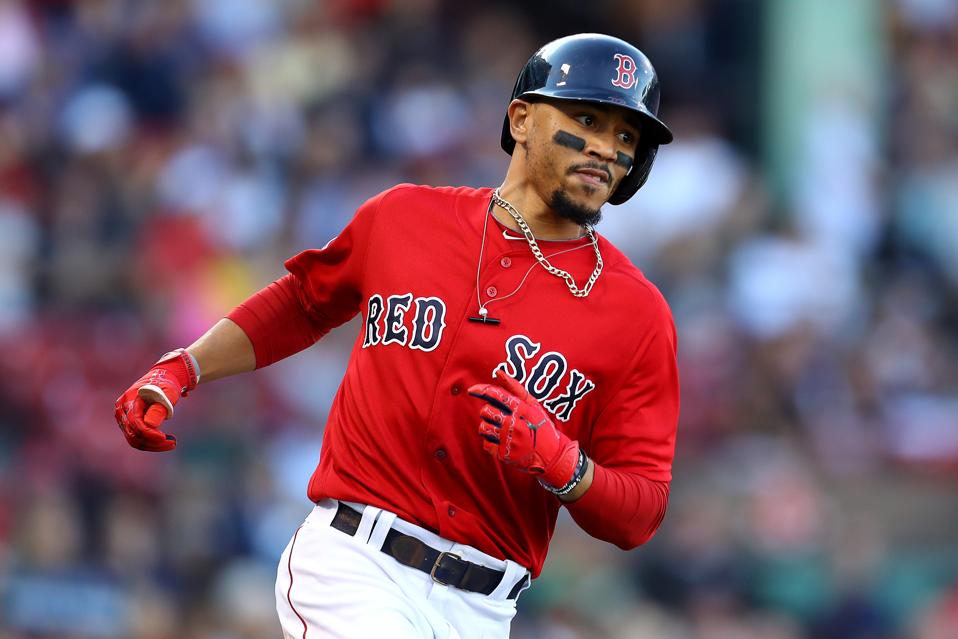 Trading Mookie Betts would be a sign that the Boston Red Sox are heading down a path of thriftiness … [+] this decade. (Photo by Maddie Meyer/Getty Images)

For at least a split second New England fans were distracted from their disappointment over the Patriot’s loss to Miami in the regular-season finale and had their attentions diverted toward spring. Well, probably not.

And then came the big trade rumor, as Jon Paul Morosi of MLB Network and Fox Sports reported that the Red Sox and Los Angeles Dodgers were digging deeper into talks that might consummate a deal that would land star outfielder Mookie Betts and overpaid starting pitcher David Price in Hollywood.

If reports of the return from the Dodgers are true, and the Red Sox would in fact be getting just a couple prospects in return, there would be no way to classify the trade as anything other than a salary dump. And that just might be exactly what the Red Sox want to do, with Betts due to get around $30 million in arbitration before his last season before free agency and Price still due $96 million over the next three seasons.

Now it might make sense for the future of the Red Sox to trade Betts to the Dodgers. It might even make sense to trade Price with Betts. But if Boston receives just futures for the two veterans, that will be a setback in their attempt to continue to compete with the New York Yankees and even the Tampa Bay Rays in the American League East. A package of futures and at least one or two major league-ready players could keep Boston in contention, but not players that might be two or three years from emerging at the big-league level.

Of course, Boston fans should’ve seen this coming. Even before owner John Henry came out with his desire to get below the luxury-tax threshold, he had hinted several times about the Red Sox losing money. The Red Sox might have truly believed an addition or two to their roster wouldn’t have helped them defend their 2018 World Series title in 2019, but clearly financial concerns were taken into account as well when Boston stood pat. And then the Red Sox fired president of baseball operations Dave Dombrowski and hired Chaim Bloom away from the Rays to be chief baseball officer. Bloom and the Rays’ stock and trade is winning on a budget and finding diamonds in the rough to fill out a roster at a reduced price.

One has to wonder if Henry, having spent to the nose to help the Red Sox win the World Series four times in the past 16 seasons, is bored with buying his titles (even though that’s the best way to go about it in a non-salary-cap professional league). Is he looking for a challenge, where his team under Bloom’s guidance, solves some sort of financial puzzle and wins the World Series with a payroll somehow below $200 million? If that’s the case, it will still take a season or two to get the payroll down, and that would probably discount the Red Sox from playing deep into October for a couple seasons. Jettisoning Betts and Price might make financial and, to an extent, baseball sense. But not without significantly replacing them.

Nothing’s happened yet and the Red Sox could go into the season with Betts and Price, see how things play out for a few months and then reassess their situation at the 2020 trade deadline. Without upgrading a roster that finished 19 games out of first place last season, though, the Red Sox are probably setting themselves up to fail for 2020. And there’s really no excuse for the Red Sox trying to be more financially disciplined. Instead of trying to win with some sort of market anomaly, the Red Sox should try to figure out how to win a World Series and then follow-up with a roster strong enough to repeat rather than what they’ve done after past titles

The Red Sox could be headed toward a decade of frugality, which means they’ll be less likely to repeat their on-field success of the past decade.

A Mystery Pneumonia Has Afflicted 44 People In Wuhan, China

How Toys R Us, Camp, and Playseum Will...

If We Saw Betelgeuse Explode It Would Be...

Why Your Personal Brand Must Be Unique: 5...

Coronavirus May Not Kill You, But Can It...