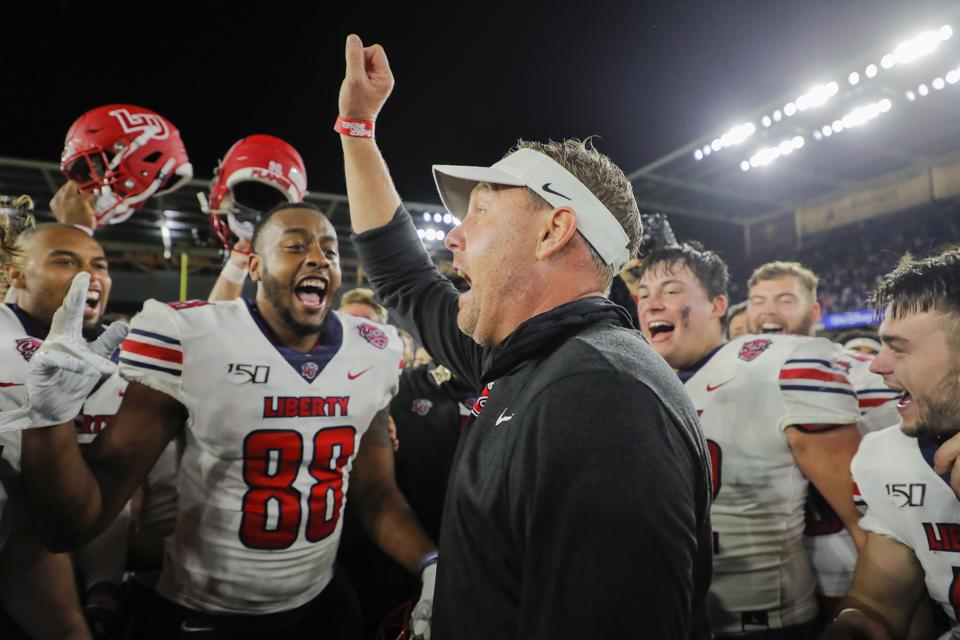 ORLANDO — Hugh Freeze and his players jumped up and down at midfield chanting “LU” as they celebrated the program’s first-ever bowl victory.

Indeed, Liberty and Freeze seemed happy together during a season, the program’s first as a full-fledged member of the Football Bowl Subdivision, that was capped off by the 50-year-old coach kissing and hoisting a trophy following the Flames’ 23-16 win over Georgia Southern in the Cure Bowl on Saturday afternoon.

It was a scene far removed from the start of the season when surgery resulting from back pain and an infection kept Freeze away from the team except on game days.

“Incredible, accepted, appreciated, humbled,” said Freeze, when asked to describe what the year since his December 2018 hiring has meant to him. “You go through things in life like I have with your family and friends and you kind of get to a point where some things that mattered before don’t really matter anymore. Some people that mattered before really don’t matter anymore, and what they may say and what they may think of you.”

Freeze resigned in disgrace from Ole Miss a little more than a month prior to the 2017 season. In January 2018 he made his first public appearance since his resignation and asked for forgiveness while speaking at Liberty.

Less than a year later he returned to the Lynchburg, Va. campus as the football program’s ninth head coach after Turner Gill retired to spend more time with his ailing wife. (Gayle Gill has since recovered from heart issues and Turner Gill has served as the executive director of student-athlete development at Arkansas since May.)

Freeze, who earlier this month signed a five-year extension at reported $2-million annually, spent little time with his team at the beginning of an 8-5 season. His back pain surfaced early in preseason camp and required surgery for a herniated disc as well as a procedure for a strand of staph infection discovered when getting to the root of the problem.

Freeze coached the season opener against visiting Syracuse from the press box in a hospital bed. A video-conference system was set up so he could communicate with the team at halftime.

The following week, Freeze flew to Louisiana on game day and arrived an hour before the Flames kicked off against the Ragin’ Cajuns. He coached from the press box in a medical chair.

The team’s theme this season was “Tougher Together” and Freeze felt he had to do his part.

“I was telling my wife, ‘How do I not show up and show that we have to be tougher together?,’’’ he said. “I was pretty worthless (those first two games). I didn’t add much value to them, but I do think the kids saw it as, ‘Look, this guy is nuts or he is really committed to us.’ Probably a little bit of both. I have been very honest and transparent with these kids and I think they just love that and they know I will never quit. I think during that course of time I proved that to them.”

Freeze, who missed 24 practices and coached a few games from an elevated platform on the Liberty sideline, returned to the sideline without aid October 19 at home against Maine.

“The time they have taken to invest in me, not only just in the belief that I am the right guy to lead this program, but then going through the health issues that I went through at the beginning of the season, they just went above and beyond to prove that, ‘We’re family and we’re going to take care of you,’” said Freeze of how the Liberty staff and administration looked after him. “Really, Liberty has invested in my kids and wife as much as they have me and I am thankful that we can give them something in return.”

The bowl victory enabled the Flames to join Georgia Southern and Appalachian State (both 2015) as the only teams to win a bowl game in their first season of postseason eligibility at the FBS level. Liberty reclassified in 2018 and was not eligible for postseason play.

Winning a bowl game was quite a way for a senior class that was instrumental in the transition from the Football Championship Subdivision to the FBS to finish. It was also what they set their sights on since Freeze’s arrival.

“He had a goal, he had a dream and had a confidence about him that was contagious,” said linebacker and leading tackler Solomon Ajayi, who transferred to Liberty from the JUCO ranks in 2017. “As soon as he came through the door and told us that we were going to a bowl game, I promise that everybody in our room believed him.”

Liberty, which first fielded a football team in 1973, believes this is just the beginning. Buoyed by an enrollment of more than 100,000, including about 90,000 online students, and with more than $3-billion in assets, the university has been moving rapidly to expand its athletic presence.

Under the direction of athletic director Ian McCaw, who resigned from the same post at Baylor in 2016 amid the wake of a sexual assault scandal that rocked that university, and Jerry Falwell Jr., whose father founded the institution in 1971, the school has completed construction on a number of facilities or is undergoing renovations to existing facilities. Included is a $25-million renovation to the football center, which should be completed this winter.

A member of the Big South Conference during its last 12 seasons of FCS affiliation, Liberty transitioned to the FBS as an independent. As such, there are no conference games and to piece together a 12-game slate the Flames have had to do things such as schedule a home-and-home with fellow independent New Mexico State.

They also want to schedule games against Power Five opponents. In addition to hosting Syracuse, the Flames also played at Virginia and Rutgers this season.

The Flames make four trips to ACC opponents next season starting with the season opener at Virginia Tech. There are games at Virginia, Syracuse and North Carolina State. A game that is sure to be circled in 2021, if Freeze is still on board in Lynchburg, is a date with Ole Miss in Oxford.

“I tell recruits that when you are an independent, the goal is to obviously go to a bowl game,” said Freeze. “Truthfully, there are probably only six to eight teams in a given year that can win a national championship. That’s the reality. My point is, as an independent, I think it is an advantage that we have an opportunity to schedule our games.”

Freeze went on to say that scheduling games at Power Five conference schools, especially the likes of Virginia Tech, provides an opportunity for players to experience a big-time college football atmosphere when visiting such campuses.

“Will we win them all?,” he said. “Probably not. But we might win one and that would be a fun day.”

Saturday was a fun day for the Flames and their fans that traveled to Orlando.

‘Dragon Quest: The Adventure of Dai’ Has A New Anime And Game On The Way

A Christmas Carol: A Call For Socialism Or Compassion?

The Charlo Twins Are The Most Underappreciated Champions...

After A Gallant Sortie, Navy Shipbuilders Are Ready...